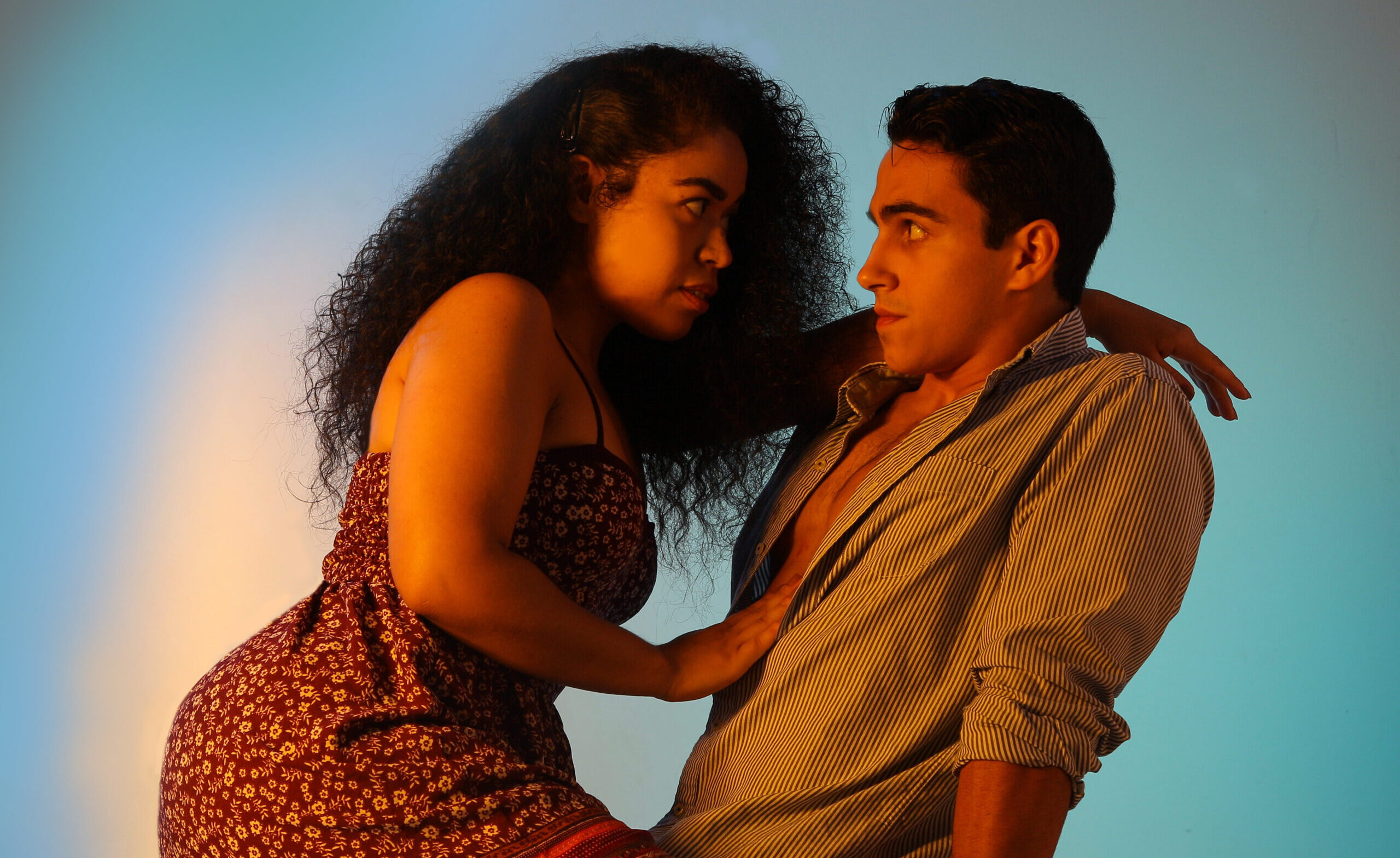 Stephanie Vazquez and Gabriell Salgado have the first of many encounters in the Zoetic Stage world premiere of Hannah Benitez’s “GringoLandia.” (Photo: Chris Headshots)

Hannah Benitez, a Cuban-American/Jewish playwright (as well as an actor, musician and novelist) who grew up in Miami, knows that each person’s Cuba is distinctive, that a homeland carrying so much beauty and sorrow may not resonate the same way for different generations.

That truth is at the heart of “GringoLandia: A Cuban Journey,” Benitez’s sometimes wild, observant and undeniably funny world-premiere family saga. Commissioned by Zoetic Stage, the multimedia play will preview on Jan. 13 and open Jan. 14 for a run through Jan. 30 in the Carnival Studio Theater at Miami’s Arsht Center for the Performing Arts.

The seeds of “GringoLandia” were planted backstage when Benitez appeared in Zoetic’s 2018 production of “Fun Home” as an actor. She had taken a trip to Cuba with her father the previous year and shared with artistic director Stuart Meltzer the idea that evolved into the play: A father who left Cuba as a child takes his Miami-born, twentysomething daughter and son to the island in search of a family heirloom.

“I thought she had such a gift, an understanding of how to drive the drama without forgetting about the humor, which is rare in a young writer,” Meltzer says. “She’s very dry, and you get that when she speaks. I fell in love with it and her excitement for it.” 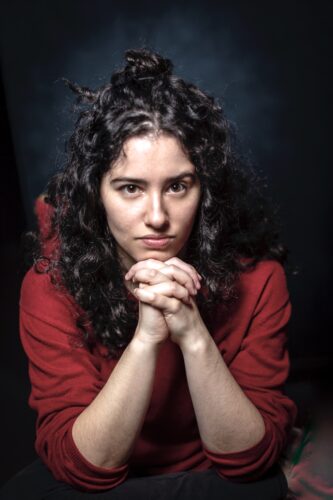 In crafting “GringoLandia,” Hannah Benitez pulled from her own experience and observations. (Photo/Michael Eady)

Her play, “The 6th, or, The Patriots,” a farcical adaptation of “Henry VI,” is a finalist for the Shakespeare’s New Contemporaries competition at Virginia’s American Shakespeare Center, and her play, “Adaptive Radiation,” will be presented next month at New York’s American Academy of Dramatic Arts. In addition to having written 10 full-length plays, she’s working on a novel with the intriguing title, “Trains to Hell Go Faster.”

Benitez knows, however, that doing a play about Cuba in her hometown carries a particular weight.

“It’s really special to have a play done in Miami,” she says. “It does raise the stakes. It’s a very visceral subject in this town.”

“GringoLandia” follows the experiences – the adventures and misadventures – of a Miami Cuban-American family during a fraught trip to Cuba.

Father Carlos (James Puig) wants his Miami-born kids Daniel/Danny (Gabriell Salgado) and Michelle/Michi (Alicia Cruz) to better understand the place that holds so many memories and shaped his life in exile. Danny and Michi, young adults who are very much a product of their hometown, seem to be gringos out of water as they encounter a series of women (all played by Stephanie Vazquez) and the sometimes-maddening realities of life in Cuba circa 2017. Percussionist Yarelis Gandul Cabrera makes her own artful contribution to the piece.

In crafting “GringoLandia,” Benitez pulled from her own experience and from “other members of my family and friends who had done birthright trips to Cuba.”  Her journey affected her in a variety of ways.

“It connected a lot of intergenerational behavior for me. I’ll think, ‘Oh, that’s why I act like that when I drop a glass,’” she observes. “Cuba has changed my relationship to Miami. It clarified within the first 15 minutes why Miami is the way it is, why there’s a hustle mentality – it’s the residue of survival. The sounds were familiar, too. Everybody sounds like my grandparents.” 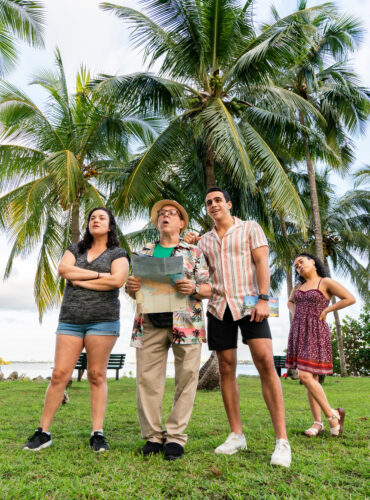 Puig, who is making his Zoetic debut as Carlos, came to Miami from Cuba as a child. He’s never been back – “this is home to me,” he says – and after graduating from Barry University (then Barry College) and the University of Miami, he built a formidable theater career in New York (both on Broadway and Off-Broadway) and at major regional theaters, though rarely playing Latino roles.

He auditioned for “GringoLandia” before the COVID-19 pandemic hit, and knew instantly that he wanted to be part of the world premiere production.

“I fell in love with Hannah’s play from the two small scenes I was given to prepare for the audition,” Puig says. “And auditioning for Stuart was so wonderfully unique that I vividly remember wishing and praying with tremendous intensity for God to let me work with Stuart on this play.

“That was over two years ago, and that hopeful joy of working with him on Hannah’s remarkable play has sustained me through the lonely isolation of COVID times.”

Puig calls Benitez “a major talent” and finds common ground with Carlos in the character’s love of family. Both the actor and the working-class character he plays were drawn to the world of the arts, though the paths they chose were different.

“He followed his head, whereas I followed my heart,” Puig says.

Cruz, a 2019 Florida International University graduate, can also relate to the play. Her father came to the United States in the 1960s as part of the Pedro Pan program.  He returned to Cuba for a visit in the 1980s, and Cruz says the experience was bittersweet.

“Some smells and sights were the same, but the energy had changed. There was silence when he was riding on the bus. He saw lots of family members who missed and loved him, and others who didn’t want to speak to him,” she says. “There was a lot of pain. It brought back a flood of memories.”

Of her character Michi, she says, “Making the journey as the child of immigrants, you understand this place is part of your cultural identity, but you have had access to only a representation of it. It’s shocking to go to Cuba and realize your cultural armor. She begins thinking, ‘I am Cuban. It’s part of me.’ Then she comes to the hurtful realization that she’s a gringa in Miami.”

Salgado recently made his professional debut as the Creature in Zoetic’s “Frankenstein.” He has since regained the weight he lost to help him create a dazzling, physically complex performance that won him glowing reviews. His character in “GringoLandia,” Danny, is an altogether different role. But Salgado says if not for the New World School of the Arts, he could have been a guy like Danny.

“Oh, Danny is me if I’d never become an artist,” says the Miami-raised actor, who graduated from New World in 2019. “I used to be that bro. I had that energy, that complacency, that lack of ambition. If I’d never found my passion, I’d be as lost and immature.” 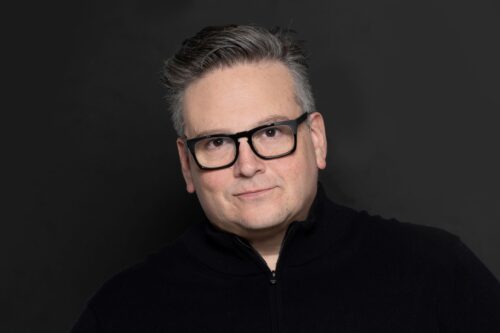 Just before COVID-19 hit, Salgado traveled with Meltzer, his artistic mentor, friend and former teacher, to Cuba to experience the country and to capture photos and videos that will be used in “GringoLandia.” As with Benitez, Salgado found the journey transformative.

“My perception of that place was completely off. Some of the things my parents and grandparents told me just weren’t true, but they come from trauma when you’re forced to leave,” he says. “I know what it means to say I’m Cuban-American, the weight of it. It’s a beautiful place and so sad. It’s a weird dichotomy.”

In a playwright’s note at the beginning of her script, Benitez writes: “In many ways, Cuba is the antagonist of this story. Not because Cuba, nor the Cuban people, are the enemy, but because the systems of the country are what technically … provide our characters, including the Cuban-born ones, with their obstacles.  Perhaps if we engage with the story keeping this in mind, we (I’m looking at you, citizens of the ‘developed world’) can fully exercise our empathy, political and global muscles. The saying goes, if you visited Cuba and had a ‘great time’ … you didn’t see the real Cuba.”

In Cuba, Meltzer says, he and Salgado spoke with people all over the island to gather research and images. He, too, felt the trip was eye-opening and often found himself speaking with Cubans about their families in Miami.

“There is not a political leaning in the play. The antagonist of the play is Cuba itself,” Meltzer affirms. “So much of our community will know these people.”

WHAT: Zoetic Stage’s world premiere of “GringoLandia: A Cuban Journey,” by Hannah Benitez