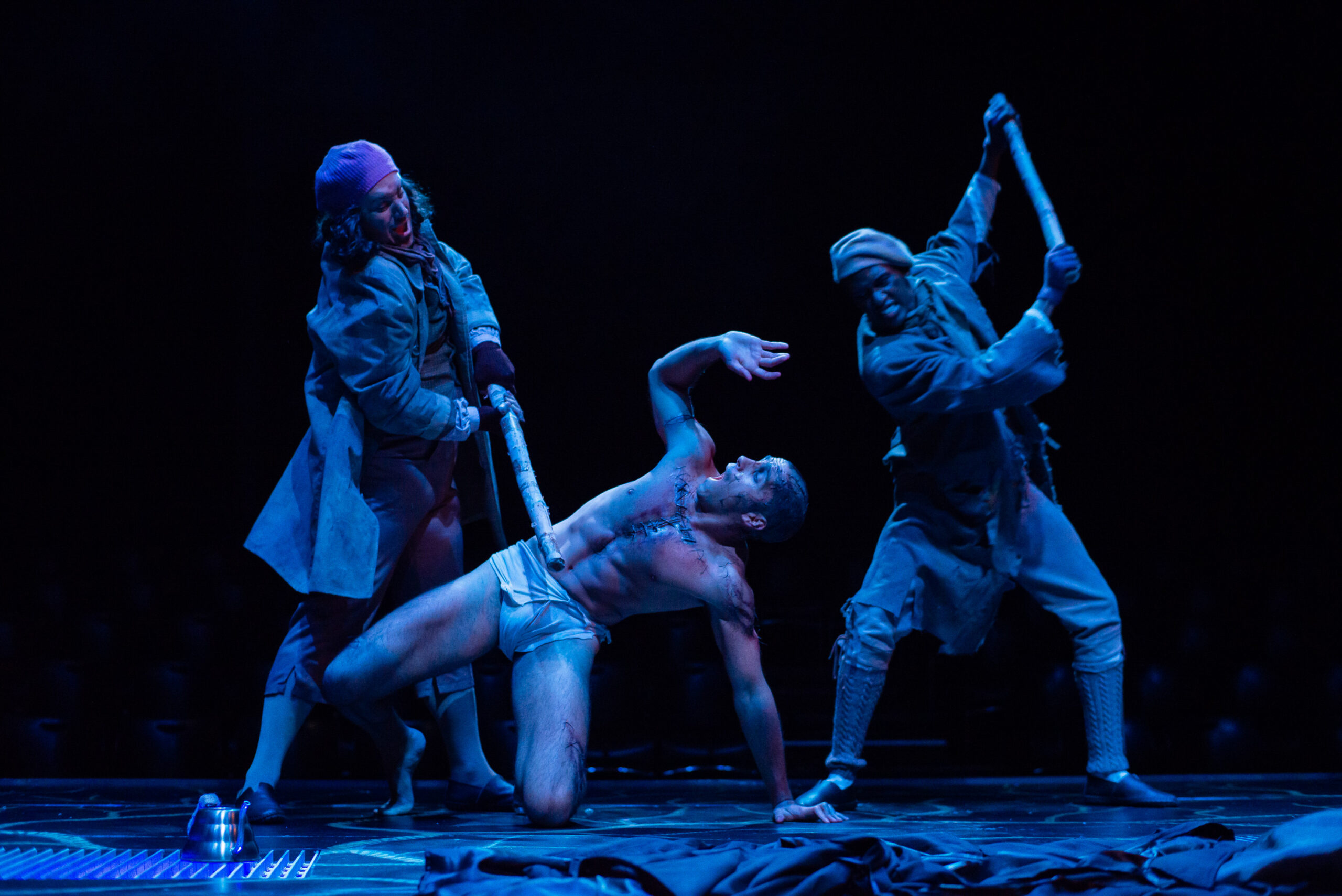 It’s difficult not to draw parallels as a creature-man fights his way out of an alien-type pod at the beginning of Zoetic Stage’s “Frankenstein.”

Only minutes before, during opening night of the production, Zoetic artistic director Stuart Meltzer had welcomed the audience back to live theater with a speech laced with exuberance while tinged with an undertone of malaise from the past 19 months. Live theater was upended by COVID-19, as we all know, and Meltzer has been waiting to stage a show inside the company’s home at the Adrienne Arsht Center’s Carnival Studio Theater.

The character of the Creature trying to break free of an isolative structure could easily be a metaphor for what an audience member feels like attending the first live performance in so many months. The “new theater normal” at the Arsht includes checking in outside to show either a negative antigen test or proof of vaccination. Then, ushers waiting at the theater door scan contactless tickets and assist those struggling to get the image to show on their phones. (And, of course, everyone but those on stage is wearing a mask.)

There’s a loneliness in British playwright Nick Dear’s 2011 adaptation of Mary Shelley’s 1818 gothic novel — and it isn’t lost on an audience just coming out of isolation. 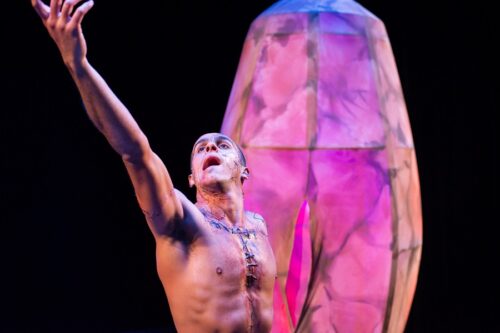 Gabriell Salgado shines as the Creature in “Frankenstein,” which is playing inside the Adrienne Arsht Center’s Carnival Studio Theater. (Photo courtesy of Justin Namon)

This is where Meltzer’s production draws its strength. Most, if not all, of the characters in Dear’s play are struggling with some sort of inner turmoil and longing. First and foremost is the Creature (played with complete devotion by Gabriell Salgado ), who is created then abandoned to fend for himself. He must try to make meaning of the world alone, while judged at every turn by his appearance. Victor Frankenstein (Daniel Capote) deals with his ambitions as savior of the world, someone who can defy God by bringing the dead back to life. Then there is an internal battle of morals, which manifests itself in the love-hate relationship he has with his creation.

Elizabeth (Lindsey Corey) must deal with a workaholic fiance who has put off their wedding to focus on his servitude to science. De Lacey (Barry Tarallo), a blind man, has lived in a dark loneliness, finally finding companionship in the Creature who stumbles into his home. De Lacey gains a sense of purpose as he teaches the Creature about the great poets, scholars and writers, but he soon learns something’s amiss with his newfound friend’s appearance.

Meanwhile, De Lacey’s family have their own woes: Felix (Nate Promkul) and Agatha (Donesha Rose) can’t get their land, filled with rocks, to yield crops. And Frankenstein’s father (Matthew W. Korinko), already a widower, then loses a son – his isolation is wrapped in grief.

However, while this is a 13-person play (others in the cast are Henry Gainza, Jeni Hacker, Imran Hylton, Ross Kaplan, Alessandro J. Lopez and Seth Trucks), it might as well be a two-hander. The story belongs to Victor Frankenstein and the Creature. The supporting characters are only there to further their story.

Salgado, a 2019 graduate of the New World School of the Arts, makes his debut at Zoetic as the Creature. Makeup artist Kelly Flores has done an exceptional job of transforming Salgado into the Creature, but don’t expect the neck-bolted monster of the 1931 Boris Karloff movie. Gone is the ill-fitting suit and platform boots. This Creature wears only a loin cloth and is covered in stitches and scars, as if his skin has been patchworked onto his body. 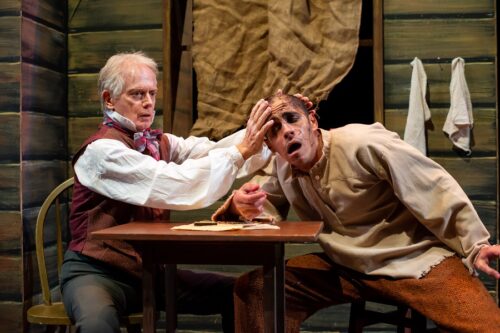 The first two scenes have no dialogue, as the Creature writhes out of the womblike pod and tries to get his footing. There’s a choreography to how the Creature takes his first steps (fellow actor Hacker worked with the actor to finetune the movements). Salgado takes the Creature from a wide-eyed, childlike innocent to a hostile and murderous monster whose tenderness turns to rage.

This is a tale as old as time, in which a hideous beast loses its innocence after it acquires knowledge and is exposed to the selfishness of the world.

Yet, even as the Creature begins to commit heinous acts, Salgado never becomes a growling monster. There’s a human side that Salgado keeps ever-present, thereby eliciting sympathy from an audience who, like others in the play, won’t judge him.

Capote’s scientist is intense, hell-bent on proving to himself and others that he has done something spectacular. The actor finds a way to match the intensity of Salgado’s Creature by having us believe that he is a victim of circumstance. The scenes between Capote and Salgado are forceful yet eloquent.

As the Creature becomes more powerful, his creator’s control diminishes. The playwright’s words, as uttered by the Creature, are: “The son becomes the father, the master the slave.” We see what the scientist’s deeds have brought to him and how actions can create consequence.

The stage goes from one end of the black-box theater to the other, with bleacher-style chairs on both sides. It makes little difference which side of the stage you choose, as there’s nothing missed from either. However, there’s an overall sense of distance created in this choice of setup. The view is that of spectator to what is happening on-stage, not allowing for an immersion into Frankenstein’s world. Considering the limits of virtual performances during the COVID-19 pandemic, a staging that allowed for the audience to feel less like bystanders might have been a better choice. 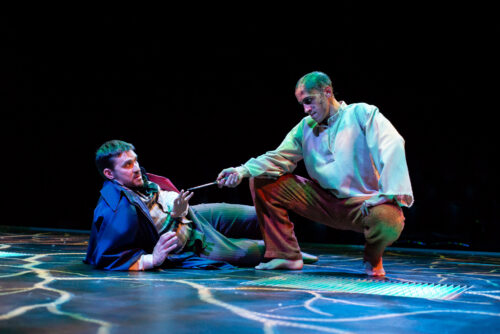 Adding to the sense of emptiness and struggle, Meltzer keeps everything sparse on the stage, so the focus is on the main characters. Designers Natalie Taveras and Jodi Dellaventura go for the minimalistic. Rebecca Montero’s lighting design finds a middle ground between presenting necessary realism and keeping the dark mood. Matt Corey’s sound design has a similar approach. Marina Pareja’s costumes capture the era.

Though not in the original play notes, a choral rendition of composer Arvo Pärt’s “De Profundis” puts extra emphasis on the climatic ending. Meltzer uses his ensemble as a choir, under the direction of Anthony Cabrera, who is artistic director of the Miami Gay Men’s Chorus. As the scientist crawls through an Arctic tundra while his Creature torments him, the ensemble encircles the pair while singing.

The piece, which takes its name from the first lines of Psalm 130 (“Out of the depths … “), is a haunting ode to feelings of longing, hope and faith. After a two-hour roller coaster of despair, death, murder, madness — and a ruthless contemplation of what it is to be human — it is a fitting closure.

Click here to read Christine Dolen’s preview for this production.

SAFETY PROTOCOLS: Masks and proof of vaccination or a recent negative COVID-19 test are required.