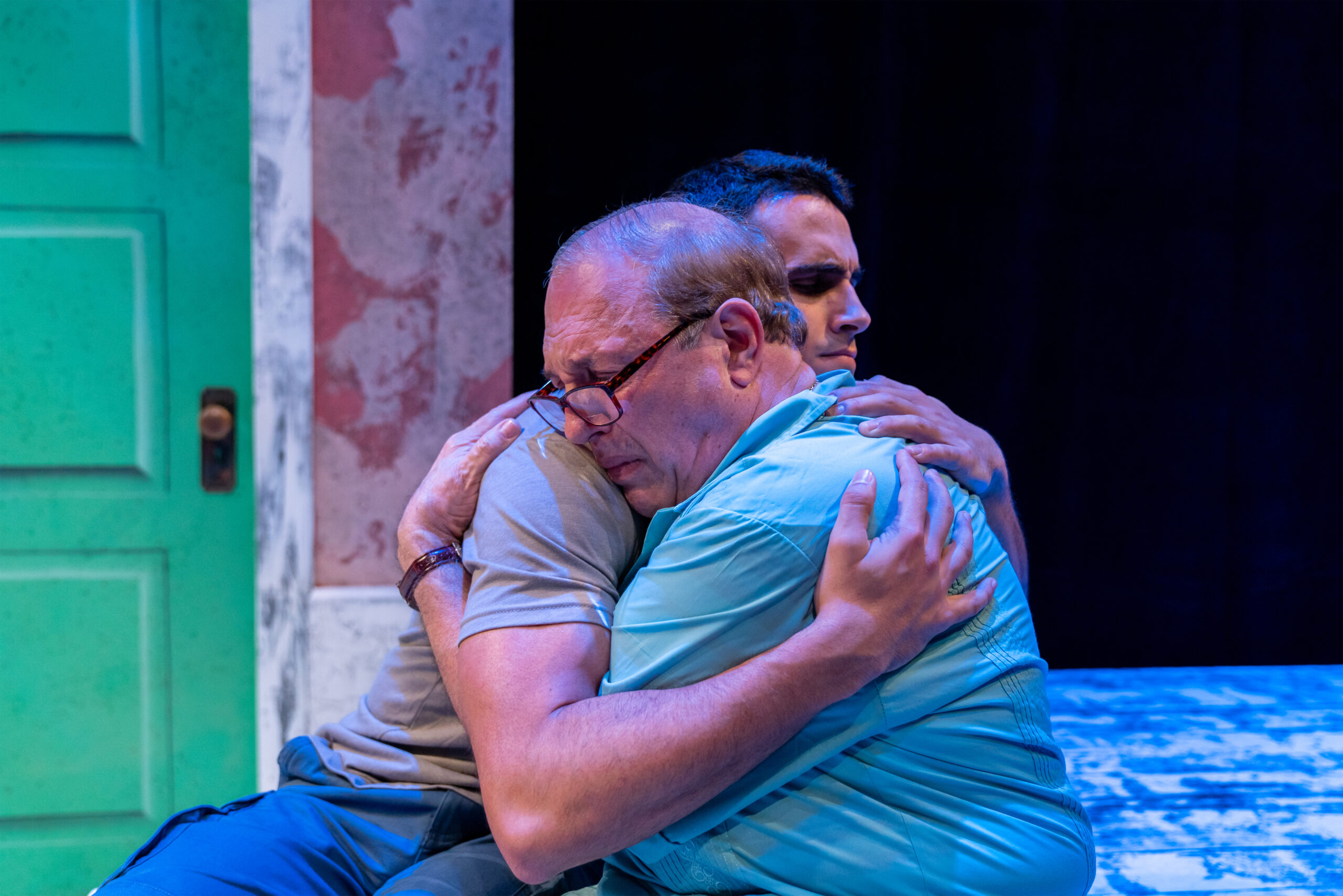 James Puig as Carlos is comforted by Gabriell Salgado as Danny in the Zoetic Stage world premiere of “GringoLandia.” (Photo/Tony Tur)

You can’t go home again, or so novelist Thomas Wolfe observed in his posthumously published masterpiece of that title. Truth. And yet we try.

At the heart of Hannah Benitez’s wonderful, funny, smart new play, “GringoLandia,” is the longing to return, physically and emotionally, to that elusive place we call home. The realization that “home” as we remember it no longer exists, that we are a blend of the places, people and events that have shaped our lives — that comes in stages.

Commissioned by Miami’s Zoetic Stage, “GringoLandia” is getting an inspired  world premiere production in the Arsht Center’s Carnival Studio Theater through Jan. 30.

Benitez — who grew up in Miami, went to high school at the New World School of the Arts and graduated with a degree in acting from Florida State University — is a rising playwriting star with projects in the works at multiple theaters around the country.  “GringoLandia” provides plenty of proof that she’s the real deal, that the excitement surrounding her work is justified.

The play charts the fraught journey of Carlos Alvarez (James Puig), a Cuban-American whose family fled to Miami when he was a just boy, back to a homeland forever altered by Fidel Castro’s revolution. After his beloved mother’s death, Carlos brings his Miami born-and-raised kids, 26-year-old Michi (Alicia Cruz) and 25-year-old Danny (Gabriell Salgado), along on what is ostensibly a quest to track down a family heirloom.

Really, though, Carlos wants to reconnect with a place refracted through his memories. And he wants his grown-but-struggling children, both very much products of “Gringolandia” (as the United States is dismissively called by some), to experience firsthand the country that might have been theirs.

What the three encounter as they travel around the island will test and maddeningly frustrate them, even as the cumulative experiences deepen their bond.

Former homes are barely recognizable. Long-lost relatives reach out for help. A teen prostitute (Stephanie Vazquez) plies her trade, to Danny’s subsequent regret. A beyond-vintage car with Jerry-rigged parts strands the family in the middle of nowhere. La Bebé (also played by Vazquez), a “santera,” sees things in the spirit world and hustles in this one. The kids are sent on a quest very different from their father’s. 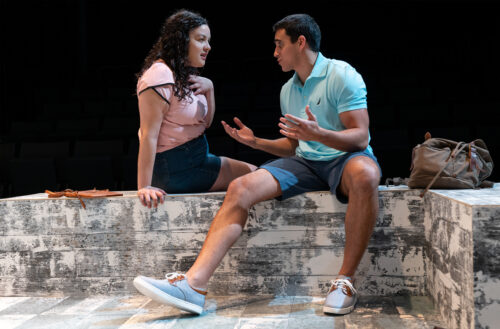 Shaped with the collaboration of dramaturg Kathleen Capdesuñer, director Stuart Meltzer and the world premiere cast, “GringoLandia” is brimming with observant detail and outlandish-yet-hilarious situations (Danny and Michi’s wakeup call in a convent comes to mind).

The play is beginning its life in the ideal place, Miami, in front of audiences brimming with bilingual Cuban-Americans. But “GringoLandia” has plenty to say to everyone. If you don’t speak or understand Spanish, “no hay problema.” Neither does Danny, so in the brief instances when a character says something that isn’t restated or translated, you’ll be standing in his shoes.

The character wearing those shoes is, as actor Salgado describes him, a “Kendall bro” —  aimless, expecting everything to come easily, an inadvertent goofball. If you saw Salgado as the Creature in Zoetic’s “Frankenstein” in October, you caught a tour de force debut melding an astonishing physical performance with the embodiment of a tragic soul abandoned by his egomaniacal creator. The actor is thoroughly different, yet creatively riveting, as the hapless Danny, naive and needy and a hot, hilarious mess.

Salgado’s Danny and Cruz’s Michi raise adult sibling bickering to an art form, though soon enough they’ll discover how important they are to each other. Cruz radiates the frustrations of the “good” kid who made sure to learn Spanish and got a college degree in order to pursue her dreams as a pianist — even if that still means three survival jobs to pay the bills. A particularly stellar scene takes place in a doctor’s office as Michi translates her suffering brother’s medical symptoms for La Doctora (Vazquez again) with horrified embarrassment. 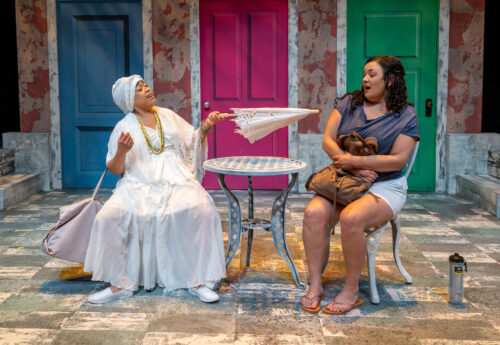 A “santera” (Stephanie Vazquez) has a proposition for Michi (Alicia Cruz) in this enlightening and touching production. (Photo/Tony Tur)

Puig, a veteran actor with numerous New York and regional theater credits, shares a bit of Carlos’ history in that he arrived from Cuba as a child and then made Miami his home.  Initially, Carlos is fairly low-key (if frustrated with his offspring) as he encounters one disappointment and frustration after another. But, oh, does that pay off near the end of the play when, drunk on too many mojitos and shots of rum, he encounters a clueless American tourist (another Vazquez role) in a smalltown bar. And there’s another tender, bittersweet payoff at the play’s end, as Carlos gets his homecoming, fleeting though it may be.

The oft-mentioned Vazquez, a Miami native who (like Cruz and Puig) is making her Zoetic debut, in many ways gets the showiest role(s) in “GringoLandia” and makes the most of them.

In addition to the “santera,” the doctor, the tourist and the prostitute, she plays a drunken dancing woman, Michi’s cousin, a cigar-smoking woman who drives the faulty car then abandons the family, a nun who is decidedly not amused by the hungover brother and sister.  With just-right costumes from designer Marina Pareja, Vazquez becomes the quick-change artist she needs to be, creating women who look, sound and move distinctively.

Percussionist Yarelis Gandul, most often performing from a small platform upstage right, sometimes weaves in and out of the action, her energetic rhythms combining with Matt Corey’s sound design to create an aural portrait of Cuba.

Director Meltzer, the man with the steady hand and creative vision, has shaped “GringoLandia” into an enlightening, touching, stylistically uniform piece of theater — amid the Omicron surge, no less (though the Arsht employs state-of-the-industry safety measures).  If you could use a laugh or a sigh of recognition, if you appreciate emerging young talent, “GringoLandia” is must-see theater.

WHAT: Zoetic Stage’s world premiere of “GringoLandia: A Cuban Journey,” by Hannah Benitez