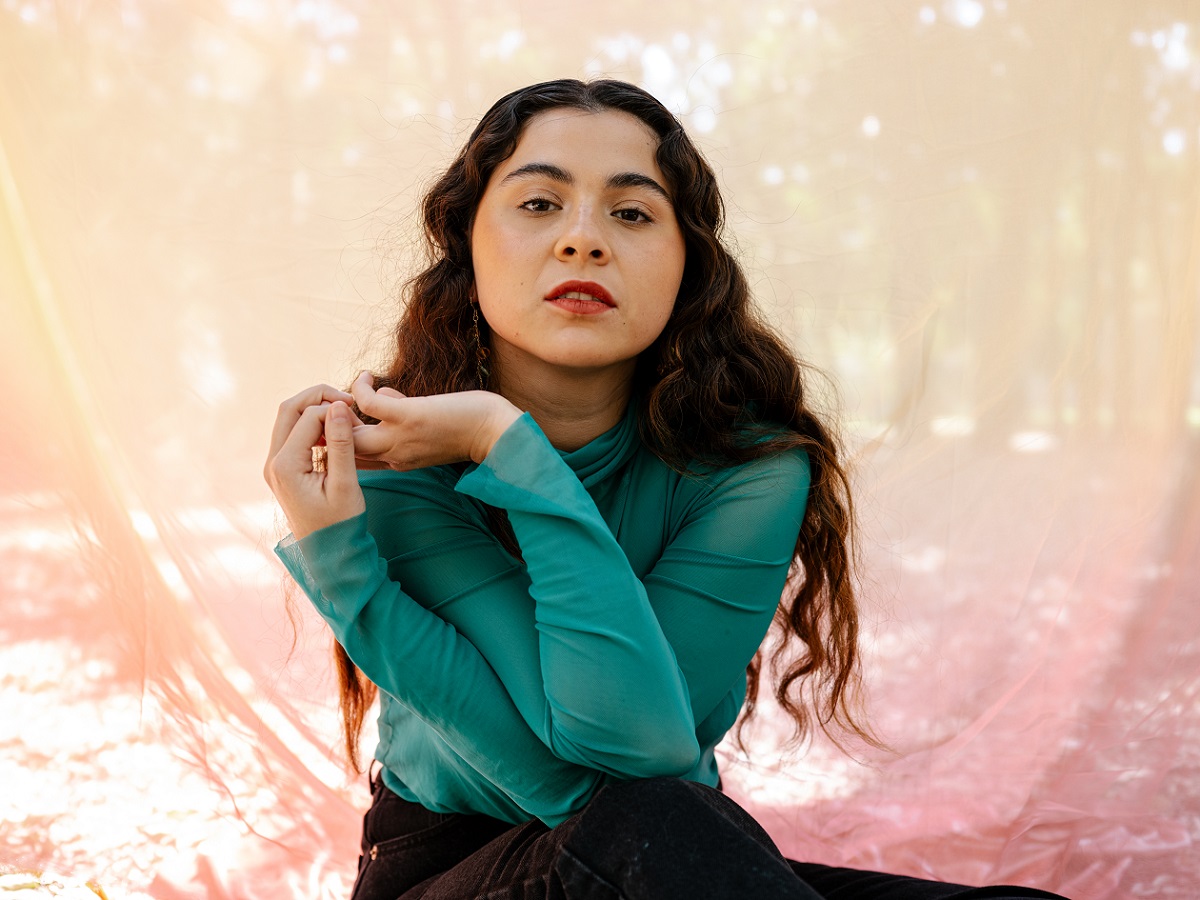 In her first appearance in Miami, Mexican singer Silvana Estrada will present
songs from her debut solo album “Marchita” at The Citadel on Friday, Aug. 5.  (Photo by Jackie Ruso)

To understand just how talented the 25-year-old Mexican singer/songwriter Silvana Estrada is, you need only watch the first few minutes of her song “Si me matan” on YouTube. With a single camera and a lean budget, the video captures the power of her unique voice and the intense, honest way she connects as a performer, even with an audience of just one.

Estrada, guitar in hand, is seated in a large stone courtyard empty but for two chairs and a stand-up mike. She sings to another woman, seated directly across from her, whose identity keeps changing—a young woman with tattoos, an older woman with glasses who begins to weep with the first words of the song, an indigenous woman with a squirming girl on her lap, a woman whose arms embrace her very pregnant belly.

The lyrics of “Si me matan” speak in an achingly personal way to the gender violence that every day takes the lives of more than ten women in Mexico, with Estrada imagining what she hopes would be said of her if she too were found murdered: “Digan…que como todas crecí con miedo / Y aun así, salí solita a ver estrellas” (“Say… that like all girls, I grew up with fear / But that even so, I would go out all alone to see the stars”). She writes in her notes on the video that she hopes the song will be a balm for the wounds left by the indiscriminate violence. 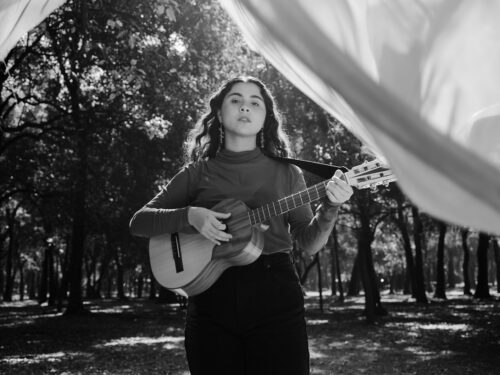 Silvana Estrada poses for a portrait in Bosque Chapultepec, Mexico City with her cuatro, a small four-stringed guitar, which was made by her parents in their luthier in Veracruz. (Photo courtesy of Jackie Ruso)

Like her mentor and friend, Natalia Lafourcade, Estrada caresses her native Spanish as she sings, and like the jazz singer Cécile McLorin Salvant, she can take a note and effortlessly twist it into sublime, otherworldly patterns.

Miami audiences will have the opportunity to see the rising star, who has been selling out concerts in Mexico, the United States, and Europe, at The Citadel’s intimate, state-of-the-art music space on Friday, Aug. 5.

Estrada hails from Coatepec, Veracruz, an area of Mexico rich in musical traditions. “I grew up playing with my family and with my friends,” she explains in a telephone interview, “going with my family to the fandango,” neighborhood hootenannies where the community would come together to sing and dance the son jarocho, the typical folk music of the region.

Her childhood, in fact, was fertile ground for a budding musician. Both of her parents not only play instruments, but they also make them: “I grew up in family of luthiers,” she says. “My mom, she does violins and violas, and my dad, he does double basses and cellos.”

She remembers growing up in her country home as a joyous environment.

During a Tiny Desk concert for National Public Radio, which featured the singer, there’s a glimpse of the idyllic childhood.  The performance was filmed in her parents’ home workshop, where tools and string instruments in different states of assembly line the walls and nature seems poised to burst in through the windows. Estrada finishes the video singing a haunting duet in the garden with her father, who accompanies her on the double bass. It is a musician’s heaven. 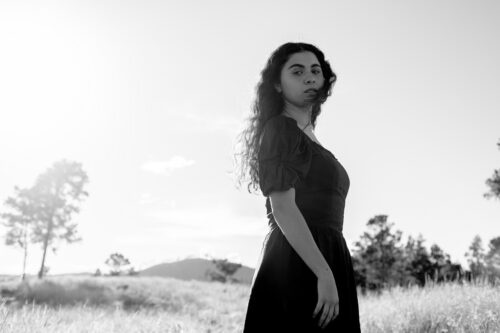 In addition to her parents, Estrada’s main reference points growing up, she says, were legendary Latin American singers and songwriters. Chile’s Violeta Parra, Argentina’s Mercedes Sosa, and Mexico’s adopted daughter, Chavela Vargas, were the soundtrack of her youth, with a healthy dose of American jazz from Ella Fitzgerald, Billie Holiday, and Sarah Vaughan rounding out the mix. In fact, Estrada was so taken with jazz that as an adolescent she studied it in Xalapa’s university conservatory, then went to the U.S. to immerse herself in the New York jazz scene.

At nineteen, she was doing background vocals for Snarky Puppy, among others. But when band leader Michael League heard Estrada’s own compositions, he helped to convince her that she should really be cutting her own path as a songwriter in Mexico.

Estrada, who says she has been writing poetry “since always,” at first didn’t see her future as a singer-songwriter. The encouragement of musical guardian angels like League, guitarist Charlie Hunter, and drummer Antonio Sánchez helped her to realize that singing her own work was a more authentic expression of who she was as an artist than singing jazz in English could ever be. 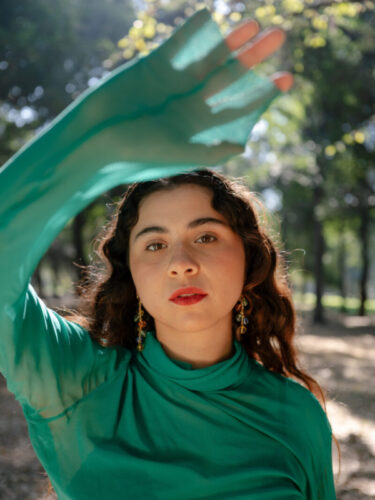 Musician Silvana Estrada poses for a portrait in Bosque Chapultepec, Mexico City, in advance of the release of her album “Marchita.”  (Photo courtesy of Jackie Ruso)

Miami’s concert will showcase music from “Marchita,” her debut solo album from Glassnote Records. “Marchita,” which garnered a four-star rating from Rolling Stone magazine and was featured in British newspaper The Guardian’s June list of the best albums of 2022, is an ode to first love and the singular pain felt at its loss. Her lyrics are richly poetic: “Cambiaste mareas y corrientes / Dejaste tu nombre en el mar / Volteaste la cara sonriente / Y yo, que no supe nadar” (“You changed the tides and the currents / You left your name on the sea / You turned your smiling face / And I, who didn’t know how to swim”). The arrangements are sparse, letting the raw honesty of Estrada’s voice shine.

While Estrada licks the wounds of lost love on “Marchita,” her first passion, the Venezuelan cuatro, is still with her. She has said in interviews that when she discovered the small, guitar-like instrument at 16 or 17 years old — it was one of her father’s that was lying around the workshop—she also discovered her voice as a songwriter. What was forced on the piano, which she studied at conservatory, flowed effortlessly on the cuatro. A cantautora was born.

Estrada already feels far removed from that difficult moment in her young life that ushered “Marchita” into the world and is bent on enjoying every minute of this new, hard-won period, performing around the world and sharing the stage with musicians like Lafourcade, Mon Laferte, or Andrew Bird. As she says in one of her songs, “Sonreír es remedio de valientes” (“To smile is the cure of the brave”).

A tribute to Nina, ‘Ladies of Simone’ kicks...

The phases of Nina Simone's career are interpreted by four vocalists in the concert revue "Ladies of Simone," the official kick off of the Live in the Park! series at Miami-Dade County's Westchester Cultural Arts Center.
Continue Reading

The Community Arts Program in Coral Gables features a summer series where concertgoers can experience a rare opportunity to see musical luminaries in an up-close setting.
Continue Reading