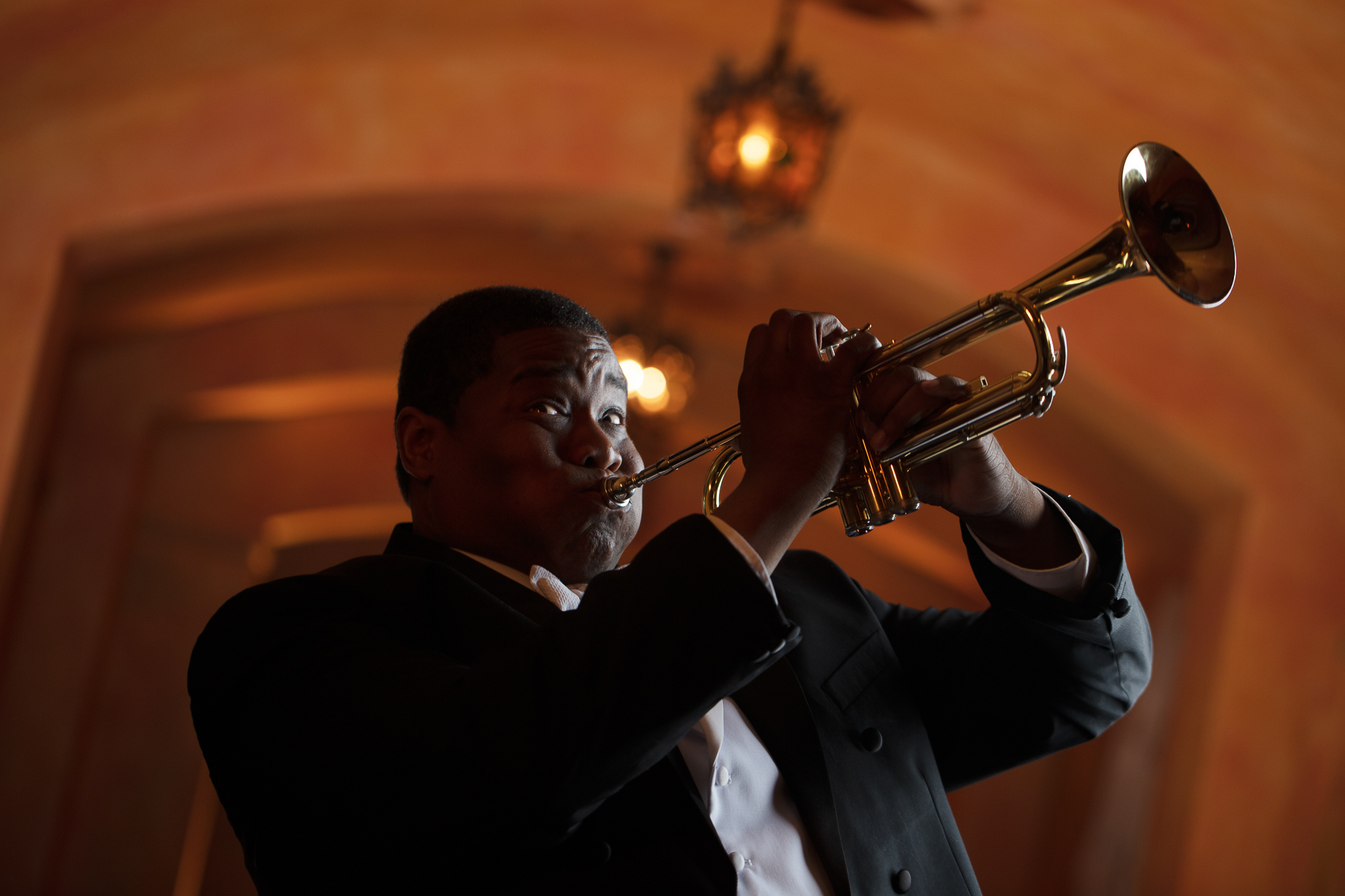 If you’re a person of a certain age, a lover of jazz, a fan of outsized personalities, you’re probably familiar with the late Louis Armstrong.

He was the great jazz trumpeter and gravel-voiced singer whose 1964 recording of “Hello, Dolly!” dethroned the Beatles from a 14-week run atop Billboard’s Hot 100 chart. He pulled that off at the record-setting age of 62, scoring the biggest seller of his career and topping the chart for 22 weeks with a song he hadn’t particularly wanted to record.

As impactful, admired and versatile as he was during a multifaceted career that began at 13 and lasted until his death at 69, Armstrong’s life was the stuff of complicated drama.

At age 11, Armstrong dropped out of school and later was sent to the Colored Waif’s Home in his native New Orleans for taking and firing his stepdad’s gun while celebrating New Year’s Eve. He went on to have four marriages – faithful, he was not – and his first wife, Daisy Parker, was working as a prostitute when they met. For decades, he was an enthusiastic pot smoker, and he did nine days in jail after being arrested for drug possession in 1930. At several points, the mob was after him. Some of his fellow black musicians called him an “Uncle Tom” for ingratiating himself with white audiences, yet his outspokenness during the Civil Rights era earned him an FBI file.

Complicated, yes – yet so rich with interpretive artistic possibilities.

That’s what Tony Award-nominated director Christopher Renshaw and his writer friend, Andrew Delaplaine, thought when they came up with the idea for the biographical Armstrong musical, “A Wonderful World.”

With a book by South Florida native Aurin Squire, and nearly 40 Armstrong-linked songs arranged and orchestrated by Annastasia Victory and Michael O. Mitchell, the show will get its official Miami New Drama world premiere on March 14 at Lincoln Road’s Colony Theatre on Miami Beach. Previews are set to begin March 5, and the musical runs through April 5.

Taking its title from the 1967 Armstrong recording “What a Wonderful World,” the musical is Miami New Drama’s most ambitious show since it launched in 2016 with “The Golem of Havana.” With a cast of 18 and a seven-member band, the production has a $1.2 million budget, thanks in part to enhancement money from investors Tom and Renee Rodgers. A typical Miami New Drama show costs $300,000.

Told from the shifting perspectives of his four wives, “A Wonderful World” is full of Armstrong songs both well-known and obscure. But it is not, everyone involved emphasizes, a simple jukebox musical.

“This is a dangerous play. It’s not a safe, feel-good play,” says Miami New Drama artistic director Michel Hausmann, who played collaborative matchmaker between playwright Squire and director Renshaw. “It explores without restriction the life of a very complicated man. We don’t know about him in the way we know about an artist like Elvis … It’s impossible to tell the story of Louis Armstrong without telling the story of racism in America in the 20th century. And the repercussions are not finished.”

When they first got together at a restaurant near the Colony, Renshaw asked Squire about his background and his interest in Armstrong. The playwright, who grew up in Opa-Locka and co-wrote Miami New Drama’s “Confessions of a Cocaine Cowboy” with Billy Corben, is a writer-producer for the CBS series “Evil” and “The Good Fight.”

He first took a deep dive into Armstrong’s life through happenstance. When he was at Manhattan’s New School, he spent a year working as a gig coordinator for the School for Jazz and Contemporary Music. In a Secret Santa gift exchange among the musicians, there was one present left over, and it was given to Squire.

“It was a giant biography of Louis Armstrong,” he recalls. “I sat and read it and became enthralled and engrossed in it.”

Squire says he signed on to write “A Wonderful World” in part because “I’m fascinated by his life. He led the life of 20 people, compressed into one. I knew Miami New Drama would let us create it the way we wanted to.”

Renshaw – a British director whose Broadway and West End credits include “Taboo,” “We Will Rock You” and the Tony Award-winning 1996 revival of “The King and I” – has lived a stone’s throw from the Colony for the past 14 years. He notes that “A Wonderful World” progressed from idea to production in about a year and a half, a very fast developmental process for a new musical.

“The only other show I directed that came together this fast was the original ‘Taboo’ with Boy George,” Renshaw says. “It can happen when you have the right collaborators and an artistic director willing to take risks. I’m getting older and don’t want to spend years on a musical.”

A white British theater artist, Renshaw says he initially was insecure about taking on a show about “an icon of black American culture.” Squire reassured him about the value of his perspective, then created a script that the director calls “filmic” and unconventional in its style.

“For example, ‘I Can’t Give You Anything But Love’ is used for all four wives in different situations,” Renshaw says. “The music feels like it was written for the show.”

As for the actors, the world premiere cast is a mixture of New York- and South Florida-based performers.

Juson Williams – a New York actor, director and choreographer who appeared in the 2001 Actors’ Playhouse production of “Smokey Joe’s Cafe” – stars as Armstrong. Although he doesn’t play the trumpet, the actor is altering his natural tenor voice to speak and sing with some of Armstrong’s signature rasp. Yamin Mustafa will be performing live when Williams mimes playing the instrument

“I’m not trying to emulate him; it needs to be the essence of him, because we are doing an icon,” Williams says.

Dionne Figgins, who began her career with the Dance Theatre of Harlem, plays the first wife and anchors the New Orleans section of the show. Lana Gordon, who has played Nala in “The Lion King” and Velma Kelly in “Chicago” on Broadway, portrays second wife Lil Harden, a musician who helped transform Armstrong’s image when they lived in Chicago. Third wife Alpha Smith, married to Armstrong during his Hollywood years, is played by University of Miami grad and jazz singer Nicole Henry. Homestead-born Darlene Hope plays fourth wife Lucille Wilson, a Cotton Club singer whose marriage to Armstrong was the musician’s longest, lasting from 1942 until his death in 1971. The home she shared with him in Queens is now the Louis Armstrong House Museum.

Once cast, Williams –  who describes himself as “an R&B singer who incorporates jazz” –  started his Armstrong research and got coached on how to properly hold a trumpet. What he discovered, he says, are similarities between himself and the man known as “Satchmo,” “Satch” and “Pops.”

“His story lines up with mine,” Williams says. “I fight hard for the things I believe in. I don’t get things easily. I hide things by being so joyful – Louis did that too … This is a beautiful show. I feel it was crafted for me. I’m exercising muscles I didn’t know I had. Everything I can do, I do in this show … This is all the universe feeding into it. When it’s right, it’s right.”

For Figgins, creating the role of Daisy Parker, whom she describes as “very complex, violent, not educated but with a lot of heart,” has involved a certain amount of freedom because the only descriptions of her came from Armstrong, who was also a prolific writer.

“This has changed my perspective about sex work. It’s hard, violent and dangerous,” Figgins says. “This has been a surprising journey. There are layers to Daisy, including loving a man you can’t go with when he’s ready to move on with his career. Yet she never thought marriage was a possibility, never expected to find a love who would see her and accept her.”

Gordon identifies with the passion that pianist Lil Harden brought to her music and her makeover of the man she initially saw as “a country bumpkin.” Of Williams, she says, “He has such an infectious personality, such charisma. You just want to hug him.” She also appreciates the way Armstrong’s music and Squire’s writing are intertwined, and the combination of narration and scenes.

“I’ve never experienced this as an actress. There’s a flow. It keeps the audience leaning forward,” she says.

Henry, who moved to New York from Miami three years ago to kickstart her acting career, read Laurence Bergreen’s 2012 Armstrong biography, “An Extravagant Life,” as she researched Alpha Smith – who was, she points out, “the only wife who left Louis.”

Acting, she says, is a challenge she’s appreciating: “I love the psychological investigation of it. I thought acting would bring me closer to [understanding] myself … Alpha is still evolving. I tell myself I can do this. We are our own worst critics,” she says.

Hope, who grew up in Orlando, earned her bachelor degree from the University of South Florida and a  master of fine arts degree from Florida State University and Sarasota’s Asolo Repertory Theatre. She took the subway to Queens to research Lucille Wilson, looking through archives and memorabilia Armstrong’s widow donated to the city of New York as well as touring the couple’s home.

She is a writer as well as a performer, and she has a deep appreciation for Squire’s work on “A Wonderful World.”

“The book could stand on its own as a play. I was impressed with how complex it is,” she says. “You get smart, fun, sometimes serious and dark commentary on the state of the human soul. I hope it does go to Broadway.”

That’s a hope shared by everyone involved, though Hausmann is pointed about the musical’s South Florida debut.

“This is a black empowerment show written by an African-American member of this community. Aurin is a Miami-Dade guy in all of his writing,” he says. “I think this has extraordinary potential. But before that, I want it to resonate profoundly in this community.”

What: Miami New Drama production of “A Wonderful World,” by Aurin Squire