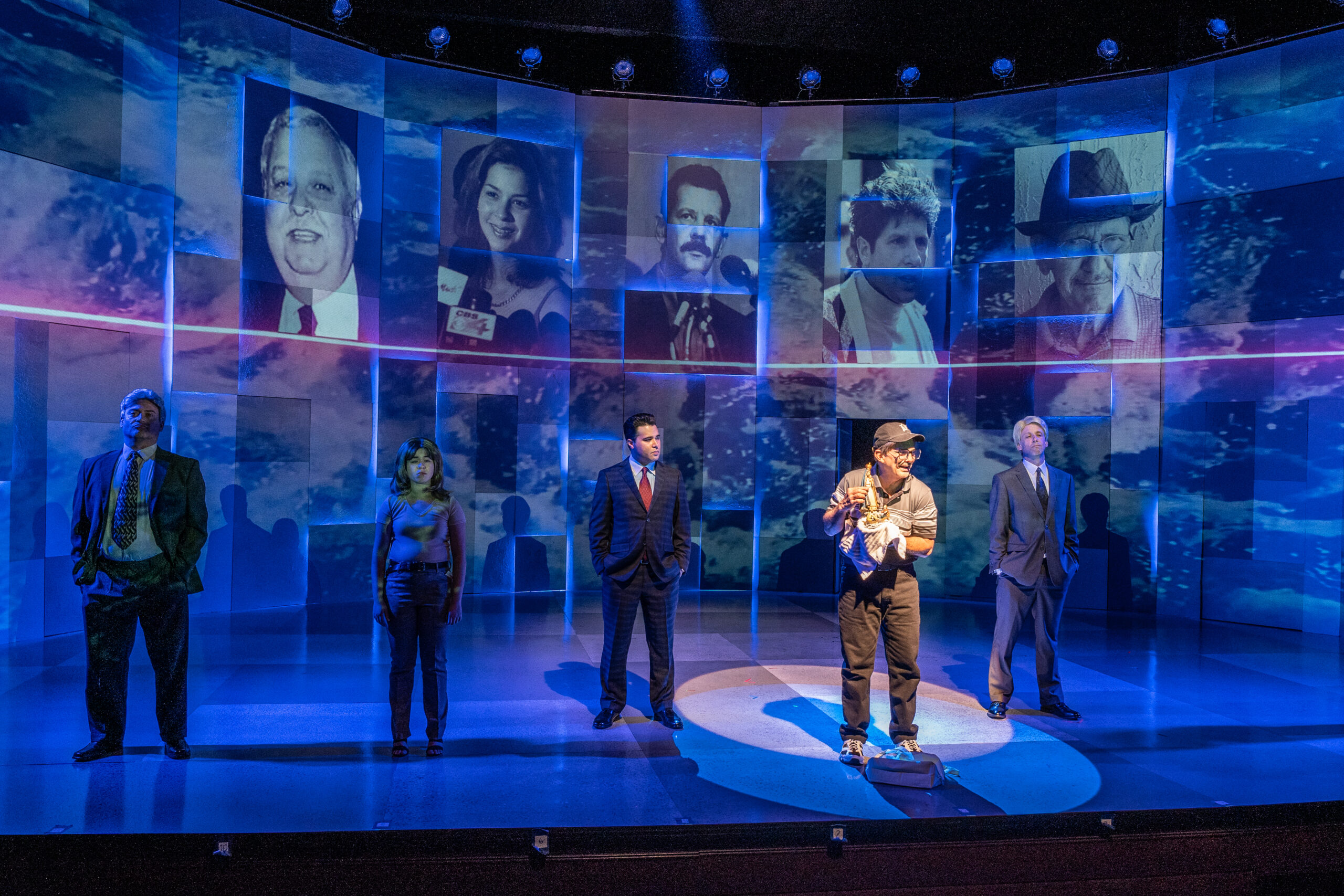 The cast of Rogelio Martinez’s world premiere of “Elián” at Miami New Drama is shown with their real-life counterparts. Photo credit Andres Manner.

In the moment, the battle over Elián González was a hugely impactful struggle for those who lived it and for Miami’s Cuban exile community.

Twenty-three years later, the story of a Cuban boy whose mother drowned trying to bring him to freedom in the United States still has lessons to impart, nuances to explore, political ramifications to ponder.

Rogelio Martinez’s “Elián,” a commissioned Miami New Drama world premiere, is revisiting that volatile time in late 1999 and early 2000 when Elián was at the center of an international custody battle.

Ostensibly, the fight was between his father Juan Miguel, who wanted the boy returned to him in Cuba, and Elián’s Miami relatives, who took him in after his Thanksgiving Day rescue from the Atlantic Ocean three miles off the Fort Lauderdale coast. In truth, at least as “Elián” sees it? Fidel Castro knew a six-year-old could be a powerful propaganda tool. 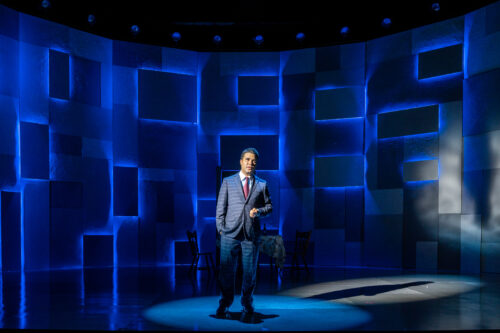 One is a fairly straightforward, deeply researched retelling of the story by those who lived it, with González family attorney and future Miami mayor Manny Diaz (Andhy Mendez) as its strategic center. The other is a wild, narcissistic recounting by political operative and dirty trickster Roger Stone (Mike Iveson), who does have a link to the Elián story – and, the script suggests, to Vice President Al Gore’s loss in the 2000 presidential election.

For this ambitious drama – or maybe, given Stone’s character, the play verges on becoming a dramedy – Hausmann uses nine actors to play more than 20 characters.

Elián himself is seen only in projected videos or photos from that time, the most chilling being Alan Diaz’s Pulitzer-winning photo of an armed federal agent pointing his weapon at a terrified boy during the early-morning raid that would return him to his father. Otherwise, we hear the sound of too-loud childish laughter offstage or see one of the boy’s toys appear to remind us that yes, an innocent child is present in a small home surrounded by chaos.

The actors in “Elián” embody such excellence and versatility that savoring their work becomes a key reason to see the production. 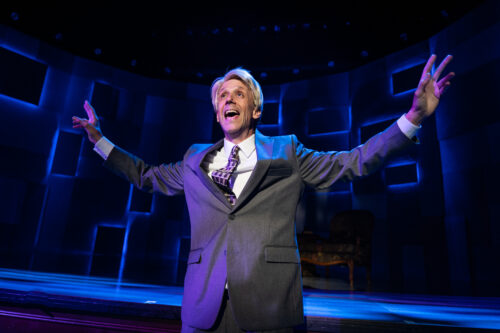 Iveson plays both Stone and President Bill Clinton, transforming into the latter by altering his accent and unzipping his fly, a running bit that never fails to get giggles from the audience. His Stone is a comic wonder, charismatic, crude, awful, irresistible.

Mendez is quietly intense as Manny Diaz, who led the dramatic 11th hour negotiations to keep Elián in Miami, and he also voices the puppet comically representing Fidel Castro. Putting aside the fact that Castro was more the puppeteer (he threatened to launch a second massive Mariel boatlift if Elián wasn’t returned to his father), the actor’s Castro voice is so high and quick that some of the lines don’t land. 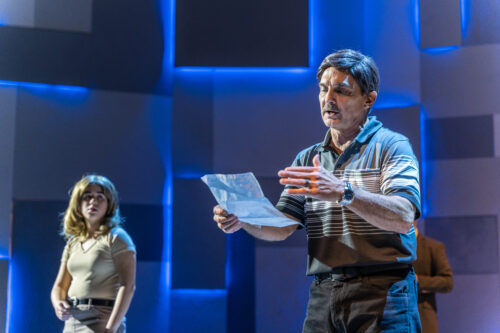 Cristina Ortega as Marisleysis looks on as Jonathan Nichols-Navarro as Lázaro González makes a decision in the world premiere of “Elián” at Miami New Drama. Photo credit Andres Manner.

Jonathan Nichols-Navarro, whose roles include Cuban National Assembly president Ricardo Alarcón and the ghost of Cuban American National Foundation (CANF) founder Jorge Mas Canosa, is compelling and sometimes wry as Elián’s great uncle Lázaro, whose Little Havana home was ground zero in a media circus.
Nichols-Navarro also transforms before our eyes into Lázaro’s older brother Delfin, a former political prisoner who was first in the González family to come to Miami. He delivers a speech in Spanish about La Virgen de la Caridad del Cobre, Cuba’s patron saint, linking her to Elián’s rescue. The actor’s performance of that passage is so powerfully heart-wrenching yet filled with faith and joy that you cannot fail to be moved, even if you don’t know a word of Spanish.

Carmen Pelaez, a fine playwright and actor who has found a creative home at Miami New Drama, gets to demonstrate her transformative chops, including a bit as future Vice President Dick Cheney’s assistant, charged with keeping the obnoxiously condescending Stone away from her boss. 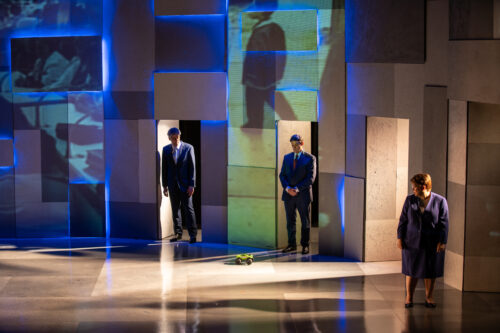 Pelaez gets laughs as the fierce and very recognizable media personality Ninoska Pérez Castellón, whose fiery approach to the Elián situation didn’t sit well with Jorge Mas Santos, her then-boss at CANF. She is also (after a bizarre yet hilarious introductory dance) a low-key and logical U.S. Attorney General Janet Reno, the Miami native who was bullied by Clinton into resolving the Elián fight and taking the political heat.

Playing a variety of roles, René Granado conveys the nervousness of Elián’s father Juan Miguel in his first meeting with Castro, subtly suggesting that bringing Elián home to Cuba may not have been his original plan. He’s also amusing as Armando Gutierrez, a “family” spokesman trying to monetize the situation at Lázaro’s home and insisting all checks be made out to him.

Caleb Scott’s work in “Elián” is also an absolute marvel of versatility. He morphs from a politically calculating Al Gore to Clinton attorney Greg Craig to Donato Dalrymple, the “fisherman” who became a González family groupie addicted to media attention. 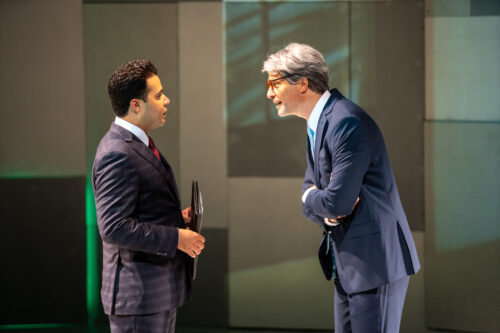 Andhy Mendez as Manny Diaz gets into a verbal tussle with Caleb Scott as Greg Craig in the world premiere of “Elián” at Miami New Drama. Photo credit Andres Manner.

Daniel Capote is sincere and straightforward as Mas Santos, the man determined to take CANF and its power in a new direction, and he gets a comic turn as one of two men named Carlos who advise Diaz on how to resolve the crisis. Cristina Ortega, a recent New World School of the Arts grad making her debut as Lázaro’s daughter Marisleysis, conveys the intense emotion of a young woman who assumed the main caregiving role for her little cousin. Gaby Tortoledo plays several wives – Diaz’s, Mas’s, Stone’s – as well as media types, effectively differentiating each character.

To create the environment for telling such a sweeping story with multiple locations, Miami New Drama turned again to the Carbonell Award-winning, New York-based design team of Christopher and Justin Swader, who have created six previous sets for the company. This one consists of a towering wall of squares surrounded by lights that can disappear or change color, with multiple doorways set into the wall.

Projections by Yana Biryukova shift locations from Miami to Cuba to Washington D.C., and they allow for the emotion-stirring child version of Elián to be shown. Kirk Baran-Bookman’s lighting anchors the shifting scenes, and Salomon Lerner’s sound-music design summons time and place. Costume designer Christopher Vergara respects the turn-of-the-century styles and uses them to help communicate place and class, and wig designer Carol Raskin does her bit to help with all of those actor transformations.

New plays are tricky to pull off, and though this one has been polished and honed and edited, this first production of a play by the incisive Martinez offers the opportunity for more tweaking. 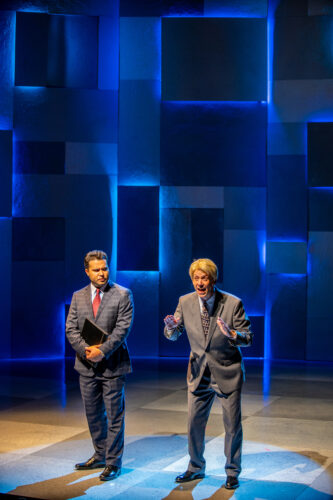 The playwright and Hausmann might look at finding an even better balance between the serious story and the abundant laughs. Though the play runs just a couple of hours with an intermission, there are so many scenes that sometimes it seems as if the characters are charging in from the doors, standing in a near-void, then quickly departing to make way for the next scene.

Several lines pointedly make connections between politics circa 2000 and today, and a bit more of that would certainly resonate. And although “Elián” was written as a piece for and about Miami’s Cuban-American community, the cascade of characters is large enough that it wouldn’t hurt to put an insert in the program briefly describing each of the real figures being portrayed.

Hausmann and his Miami New Drama colleagues continue to hew to the company’s mission as they tell fresh stories about our diverse, unique community. “Elián” turns out to be a thought-provoking surprise, one that is bringing out the best in a company of actors from South Florida and beyond.

ArtburstMiami.com is a non-profit source of theater, dance, music and performing arts news. Sign up for our newsletter and never miss a story.