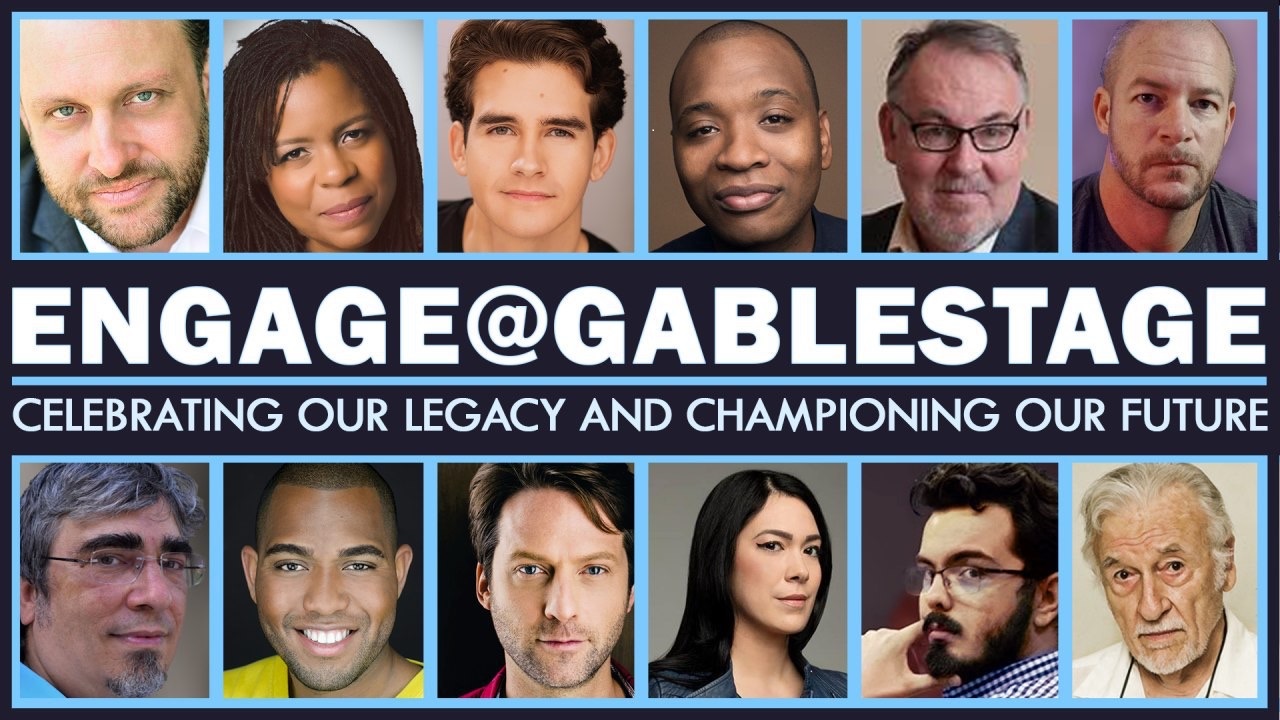 “Engage@GableStage,” featuring works by a diverse group of artists of all ages, will run each Friday from July 31 to Sept. 25. All of the virtual pieces will remain as free content on the company’s website. (Image courtesy of Alejandro Martin)

Like so many performing arts organizations, GableStage found itself facing an unplanned hurdle when the COVID-19 pandemic forced the company to shelve its production of Arthur Miller’s “The Price” in mid-March.

That hurdle turned into a crossroads on April 16 when Joseph Adler, the company’s award-winning producing artistic director since 1998, passed away after an 18-month battle with pancreatic cancer.

Added to the major loss of Adler, an outspoken artist whose company reflected his eclectic taste and passion for deeply engaging theater, GableStage’s planned move to a smaller, state-of-the-art version of the Coconut Grove Playhouse continues as its own contentious drama. And the remainder of its current season, which was to have run into the fall, has been scrapped.

Even so, GableStage’s board and its chairman, Steven M. Weinger, along with general manager Isabel Almaraz and the theater’s staff, are continuing to connect with artists and audiences via a world premiere digital project titled “Engage@GableStage.”

Administered by director Margaret M. Ledford, who produced GableStage’s version of Joseph McDonough’s “Ordinary Americans” with Adler, “Engage@GableStage” awarded grants of $1,500 to $3,000 to “thought-provoking and engaging” projects by a diverse group of artists of all ages: men and women; straight and LGBTQ creators; Black, Latinx and White writers, performers and composers; people with a long GableStage history and others who had never worked there.

“Eight panelists chose the projects,” says Ledford, who serves as artistic director of Miami’s City Theatre. “They had to be high-quality, high-caliber mini-productions dealing with where we are as a human race right now.”

Virtual content, which has been more expansively explored during this pause in live performances, is its own art form, but Ledford thinks it can help sustain artists and organizations as it fills a gap.

“Although we can’t be together in a room, this gives you the opportunity to find a connection, even though it’s not the connection. I know some people are having Facebook and YouTube watch parties because they’re seeking that sense of community, that synergy,” she says.

The eclectic projects will premiere at 7 p.m. each Friday from July 31 to Sept. 25 in a special section of the company’s website, Gablestage.org/engagegablestage. All of the virtual pieces will remain as free content on the site.

On the Monday before a piece premieres, the site will feature a video of Ledford interviewing the creator or creators behind that week’s offering.

A special tribute piece, “Sight & Sound” by George Schiavone and Matt Corey, will kick off the project on July 31. Schiavone, a photographer and actor who was a close friend of Adler’s, narrates a montage of GableStage production photos he shot over the theater’s long history, and composer-sound designer Corey has blended new original music with the music he created for numerous productions.

“The form is kind of Ken Burns,” notes Schiavone, who was in rehearsal to play Gregory Solomon, the antique furniture dealer in “The Price,” when the pandemic hit. “It has a mixed purpose. Although it exhibits the photography and Matt’s music, it also provides a look at the wide range of Joseph’s curiosity.

“These sessions afforded me some income as well as the fun of working ‘with’ Joseph again. He always had a very good visual sense, and we practically finished each other’s sentences as we worked … I feel as though part of me left with Joe. The thought that I can’t call, text or email him for an opinion – or vice versa – anymore leaves me bereft and very sad.”

Kunya Rowley’s “My Black Body Is,” premieres Aug. 7. The piece blends different art forms with the perspectives of Rebecca L. Hargrove, Ace Anderson, Rodney Jones II and Rowley, who is a New World School of the Arts graduate and artistic director of the multidisciplinary performance series, “Hued Songs.”

As the artists navigate “walking through a world in Black bodies,” Rowley says, the goal of the piece “is to highlight the trauma and the pain, because it’s very much real, but to also highlight the joy, the light and the beauty of being Black, and to celebrate our blackness unapologetically.”

Premiering Aug. 14 is “Intimate/Internet,” a piece by recent Florida International University grad Brandon Urrutia and director-playwright Michael Yawney, an associate professor in FIU’s theater department. The piece is about a man who has moved back to his parents’ house during the pandemic and wants to explore relationships online – but the WiFi in his bedroom is bad, and the décor is all about “Star Wars.” His delicate, personal search for love gets complicated when he discovers that the only decent connection is in his mom’s dominion, the kitchen, and she’s usually only a few feet away.

Jessica Farr and Caleb Scott, the playwright-actor duo who created and cohost the Florida Man-inspired “Worst Place on Earth” podcast, are represented by “A Florida Story,” which premieres Aug. 21. Performed by Vanessa Elise, Chad Atkins and the two playwrights, the piece features characters in distinct environments.

“The audience will be meeting four strangers as they recount experiences from their past; gradually, perhaps imperceptibly, all of these stories blend together into a symphony,” Farr and Scott say of their project, which interweaves visual storytelling, performances, archival footage and a new score by Miami’s Afrobeta.

Working in this new way, the duo says, is worth exploring beyond the pandemic: “We should be asking ourselves all of the questions when it comes to presentation, form, content and engaging with audiences. Everything is uncharted territory. We don’t have to return to our old modes of operating. We need new voices, and those new voices should reflect both our community and the radically changing landscape of our environment.”

Joshua Hernandez, who got his first professional role in 2018’s “Admissions” at GableStage, premieres “Pretty Boy Josh” on Aug. 28. He transformed an early draft of a script for a solo show into something he describes as “performance art theater-meets-documentary film.” The piece explores “my experience growing up as a closeted queer Latino man in Miami, my battle with ulcerative colitis, and the possibility of living an optimistic queer life,” he says, adding that his dream is to develop it into a fully realized piece of theater.

Rachel Finley’s “American Bullet,” which premieres Sept. 4, is one piece of a solo show titled, “America Burning.” An actor-playwright and drama professor, Finley originally wrote “American Bullet” as a poem a few months before the 2018 school at Parkland’s Marjory Stoneman Douglas High School, where her son was a student.

“The anguish of waiting to know who survived and who was lost, the pain of attending funerals of my former students and my son’s friends and his wrestling coach, participating in the protests rallying for common-sense gun control … were all a lot to process,” Finley says.

“The difficulty of processing this moved me to revisit and expand the poem into a performance piece that grapples not only with the shooting at my son’s school but America’s obsession with guns and martyrdom. I found that I couldn’t address this, as a Black woman, without also being influenced by the ways in which that obsession has specifically impacted my ancestors and contemporaries.”

Carbonell Award-winning actor Gregg Weiner, a veteran of 17 GableStage productions, has been using pandemic isolation as a time for taking stock and reinvention. His virtual piece, “Reboot,” which debuts Sept. 11, is the result.

“‘Reboot’ is a dark comedy about a man approaching the midpoint of his life and finding that his expectations for it have not come to fruition. He feels out of place, out of touch, and is losing control of his mental health,” he says. “Mental health, societal expectations and our ever-changing world all rear their heads in it.”

British-born actor-author Colin McPhillamy – whose resume includes roles on Broadway, in London and in numerous regional theaters including several in South Florida – has created a piece titled, “Stars in the Bard,” which premieres Sept. 18. In it, he interweaves material about William Shakespeare, astrology of the late 16th and early 17th centuries – and GableStage’s late guiding star, Adler.

The series winds up Sept. 25 with “1/1000” by New World School of the Arts alum Joshua Jean-Baptiste. Creator of the digital series “Grown” with fellow Haitian-American artist Edson Jean, Jean-Baptiste performed in GableStage’s “Actually” in late 2018.

His piece is a work of science-fiction “that came out of my own personal struggles with quarantine,” he says. “The project follows Melvin, a cynical tech worker who has unplugged from his responsibilities and submitted to a nihilist outlook … Instead of facing himself, he resorts to a mystical piece of technology that grants him access to change certain factors of his life – only to realize that new circumstances come with newer problems.”

Like his fellow grant winners, Jean-Baptiste welcomes the chance to continue making art in an altered world.

Artists, he says, are being forced to “think outside the box, within the box – the boxes of our houses, our Zoom calls, our phones. Creativity (and capitalism) have a funny way of driving innovation. I think ‘Engage’ is doing the smart thing and aligning with the present. This bridges the time by giving audiences a temperature check on the theater scene. It reminds them that creatives are still here, still chipping away at ideas and still ready to tell compelling stories.”

“Engage@GableStage” content will be available for free at Gablestage.org/engagegablestage at 7 p.m. each Friday from July 31 to Sept. 25. Visit the website for the schedule and more information.