Review: At Actors’ Playhouse, ‘Now and Then’ explores roads taken and paths ignored 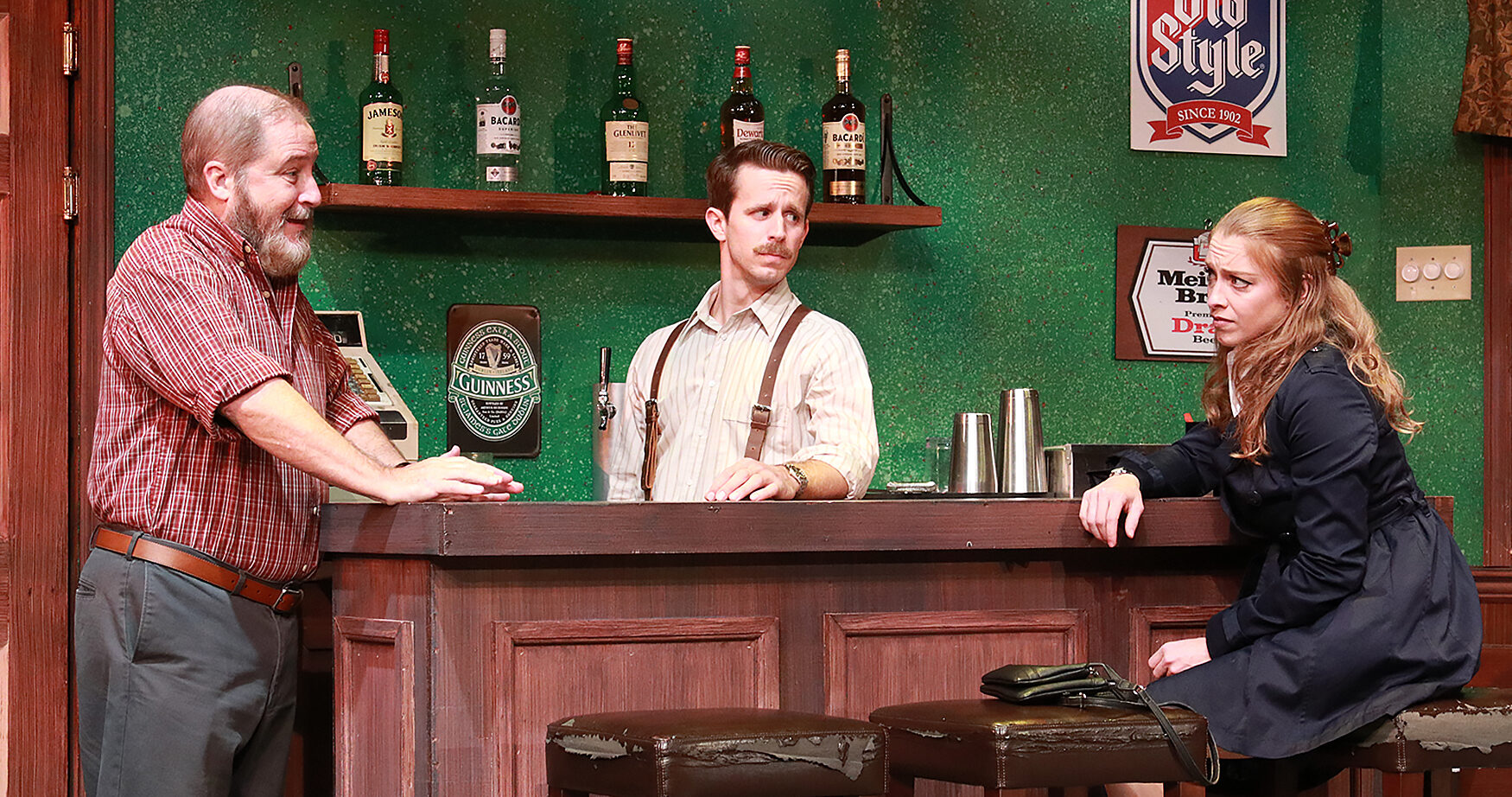 Stephen Trovillion, Kristian Bikic and Mallory Newbrough in Actors’ Playhouse’s “Now and Then” at the Miracle Theatre in Coral Gables through Sunday, Sept. 11. (Photo courtesy of Alberto Romeu)

A man walks into a bar and – OK, we’d stop right there if we’d vowed to keep this particular review 100 percent spoiler free.

But Sean Grennan’s dramatic comedy (or “dramedy,” as director David Arisco describes it) is neither a joke nor a shaggy dog story.  Even if you guess what’s going on minutes into the new Actors’ Playhouse production of “Now and Then” (and many people will), Grennan’s play keeps you hooked from start to finish.

Something in Grennan’s work speaks to Arisco, the company’s artistic director for nearly all of the 35 years Actors’ Playhouse has been in business. “Now and Then,” which premiered in 2018, is the fifth Grennan show Actors’ has presented (“Married Alive!,” “Another Night Before Christmas,” “Making God Laugh” and “The Tin Woman” were the others).  This one, with its carefully layered-in “surprises,” is as thought-provoking as it is entertaining. 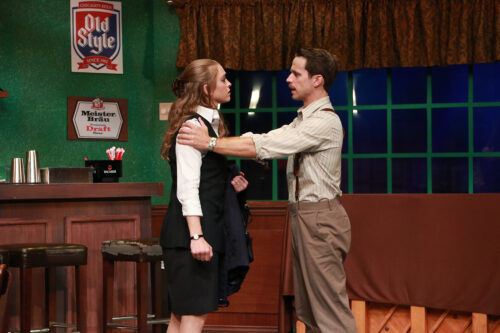 Trying to share much of the story while avoiding spoilers is pretty much futile, so we’ll stick to the setup.

The aforementioned Man (Stephen Trovillion) walks into Mulligan’s Irish bar in Chicago in 1981.  Bartender Jamie (Kristian Bikic) is starting his nightly closing ritual as he waits for his girlfriend Abby (Mallory Newbrough), a waitress at the IHOP down the block.  The Man (that’s how he’s identified in the program) is in a hurry, desperate for a drink and determined, so Jamie pours a Scotch and soda with a twist – at the going rate of $1.25.

Once Abby arrives, the Man makes the couple a strange, escalating offer which ends this way:  If they’ll sit with him for one hour, talking and drinking, he’ll pay them $1,000 – each.

They bite. Jamie has been saving to take a break from the bar so he can focus on becoming a great jazz pianist. Abby wants to go back to college to study literature and writing. The Man’s money will speed up the process for both, so Jamie fixes a Tanqueray and tonic for Abby and a Rusty Nail for himself, then the Man launches into his storytelling, his questions and his agenda, sometimes with the help of a few rounds of Truth or Dare.  The very late arrival of a character called Woman (Laura Turnbull) adds more layers of complexity and emotion. 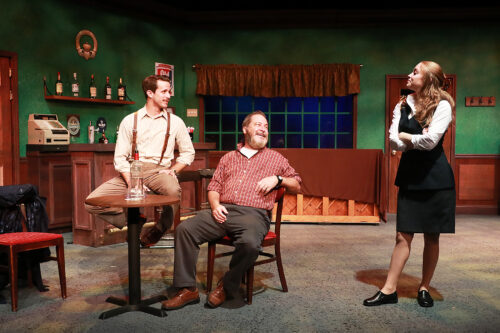 Kristian Bikic, Stephen Trovillion and Mallory Newbrough share a laugh in the Actors’ Playhouse production of “Now and Then.” (Photo courtesy of Alberto Romeu)

As the younger couple looks ahead to their future and the older one contemplates the past, Grennan explores the myriad decisions, the small ones and the big ones, that forge the course of a life.  Hopes, regrets, dreams, loss and love in its many manifestations all come into play, as well as that big, inevitable question: What if I choose this path instead of that one?

Bikic’s Jamie knows what he wants but isn’t sure yet about what he doesn’t.  Newbrough’s Abby seeks a way forward toward a bigger picture. Turnbull, intense and commanding, reminds us why she’s considered one of the region’s finest actors.  The versatile Trovillion, back in South Florida after 16 seasons with City Theatre’s Summer Shorts festival and retiring from his subsequent university teaching job in Wisconsin, is everything in “Now and Then” – funny, maddening, heartbreaking.

With the play performed in the smaller Balcony Theatre upstairs at the Miracle Theatre, set designer Gene Seyffer and set dresser/properties designer Jodi Dellaventura give the cast a compact though proper Irish bar, its green-hued interior just waiting for the rush of  St. Patrick’s Day revelers, though here’s hoping Jamie can get the jukebox fixed before then. 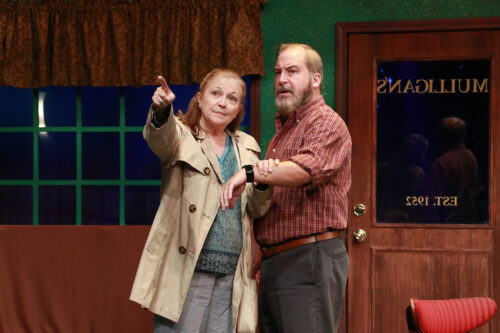 Laura Turnbull as Woman and Stephen Trovillion as Man in “Now and Then” at Actors’ Playhouse in the Miracle Theatre, Coral Gables. (Photo courtesy of Alberto Romeu)

Eric Nelson has designed lighting that fits the play’s shifting moods – mysterious, unforgiving, dreamy.  Alex Bonilla’s sound includes a snippet of Frank Sinatra crooning George and Ira Gershwin’s “I’ve Got a Crush on You,” Jamie and the Man playing the piano, and the noise of the era’s hot Asteroids arcade game.  Costume designer Ellis Tillman’s on-point work reflects the times, the characters’ taste (Jamie is one snappy dresser) and their financial status.

“Now and Then” isn’t a long play – under two hours, including an intermission – nor is it likely to change the way you look at life.  You’ll feel it, though, especially in its final moments – a transporting stage picture involving all four characters, with Trovillion crooning the same tune as Ol’ Blue Eyes.

WHAT: “Now and Then” by Sean Grennan

WHERE: Actors Playhouse in the Balcony Theatre at the Miracle Theatre, 280 Miracle Mile, Coral Gables

COST: $40 to $90 (seniors 65 and over get 10 percent off weekdays only; students 25 and under with valid student ID pay $15 for a rush ticket available 15 minutes before a weekday performance. Special Lunch Break deal offers half-price tickets between noon and 2 p.m. to same-day weeknight performances; Tix @ 6 offers half-price tickets weeknights between 6 and 6:30 p.m., with both requiring an in-person purchase at the box office, subject to availability)