Michael McKeever is pondering big questions in Zoetic Stage’s “American Rhapsody,” a world premiere that boldly traverses more than 60 years in an extended family and an ever-evolving country.

The audience sees a changing America through the lens of the Cabot family of Lawrence, Kansas, and New York City.  This Cabot line begins with the distinguished, much-admired judge Franklin Cabot, a man already deceased when he first appears onstage. His descendants include a celebrated poet, several attorneys and a rising politician.  Diversity in sexual orientation, ethnicity and race enriches the generations as they become a family by birth and by choice.

Plenty of sorrow and tragedy play out through McKeever’s story – because, you know, that’s life – but this is a playwright who is deft at comedy and knows that’s part of life too.  Director Stuart Meltzer, Zoetic’s artistic director (and McKeever’s husband), has proven himself masterful at finding laughter at just the right moment, and thanks to the combination of playwright and director, “American Rhapsody” elicits a richly varied tapestry of emotions.

Poet Franky Cabot (Alex Weisman) is the narrator and fulcrum of this memory play, a piece in which time is both orderly and fluid.  The patriarch everyone calls Papa Frank (Stephen Trovillion), for example, has a hilarious and enlightening interaction with Franky’s future BFF Nat Morris (Lela Elam) when the judge has already lived his life and Nat, a Black lesbian, is yet to be born. 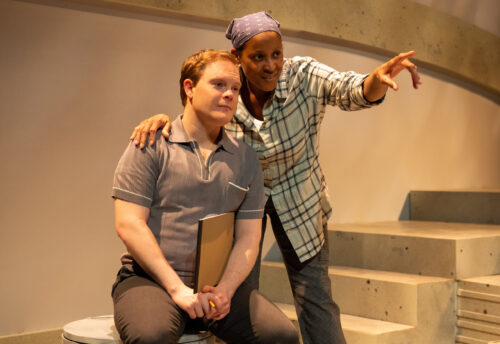 Alex Weisman and Lela Elam are the best of friends in Zoetic Stage’s world premiere of “American Rhapsody.” (Photo by Justin Ramon)

After Franky reads from an epic poem he’s struggling to get right, the play shifts to the 1969 lunar landing, as a sleepy five-year-old Franky (then called Little Frank) is plucked from bed to join his family as they watch Neil Armstrong become the first human to set foot on the moon.

His father Big Frank (Aloysius Gigl), intense mother Eleanor (Laura Turnbull) and big sister Jenny (Lindsey Corey) have gathered around their television to watch history being made. Big Frank insists his little boy should also share in a moment he’s convinced will propel America into its future. Eleanor and Jenny are dubious about a five-year-old’s capacity to take it all in, and as it turns out, they’re right.

Expectations, hopes and the sometimes-brutal sting of reality collide repeatedly in “American Rhapsody,” as they do in life.

The driven and outspoken Jenny, described as having the same sort of “blue fire” in her heart that Papa Frank did, finds herself at a crossroads when she discovers that she and her Cuban-American boyfriend Albert Bernal (Carlos Alayeto) are expecting. Their personal crisis – have the baby or have an abortion – is vividly conveyed through some of McKeever’s finest writing.

Franky, who has abandoned his extremely flat and conservative home state for gay-friendly Manhattan, navigates his own career struggles against the backdrop of the AIDS crisis.  He approaches famous literary agent Terrence Ray (Trovillion who, like the majority of the cast, plays more than one role) about representing him and gets a short, polite, devastating response, which includes these words: “I find what your work currently lacks is a sense of experience. The weight that comes from facing tragedy.” 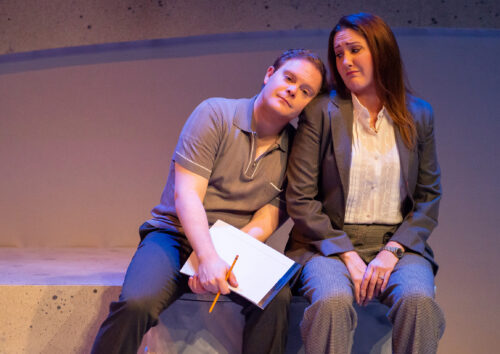 Soon enough, Franky’s work will acquire that weight as the poet-essayist grows famous and ever more furious.

Weisman, who grew up in Davie, won Chicago theater’s prestigious Joseph Jefferson Award for his work in “The History Boys” and “Hand to God,” and his many TV roles include gay dad Frank on “Sesame Street.”

Still boyish in his mid-30s, he is an inspiringly skilled actor whose performance as Franky embraces the character’s weaknesses as well as his talents.  Evolving from that confused five-year-old to a debilitated 68-year-old nearing the end of his life, Weisman earns every moment in the spotlight.

Trovillion, veteran of many a Summer Shorts festival, demonstrates his versatility yet again as the curious, progressive Papa Frank and the supremely snooty Terrence Ray.  As Big Frank, Gigl is a man-of-few-words midwestern farmer. Then he changes utterly as he becomes Justin, Franky’s New York editor and friend, a gay man whose experience of the AIDS crisis begins when he locks eyes with a smiling stranger in a bar. 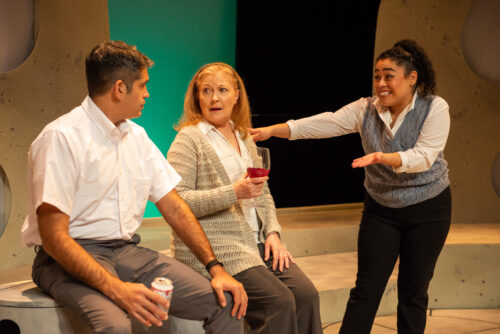 Carlos Alayeto and Laura Turnbull react to Stephanie Vazquez in a scene from “American Rhapsody.” (Photos courtesy of Justin Namon)

Turnbull makes Eleanor a prickly woman who fails to realize for far too long that she might have made other choices in life. Then as Miss Cunningham, she becomes an outraged sparring partner with transgressive college student Jenny.

Like Jenny, Corey keeps that blue fire blazing in her character’s heart, aging from girl to young woman facing a life-changing decision to on-the-rise lawyer with a suffering husband and young daughter at home.  She also briefly plays Sally, the woman who brings true contentment into Nat’s life, but it is her journey as Jenny that’s so powerfully captivating.

Elam’s Nat isn’t the first role McKeever has written with the actor’s voice in mind, but this one – complex, wry, provocative, funny – is a perfect fit.  Elam has theatergoers in the palm of her hand from the get-go, and as she becomes increasingly important to Franky and others in his family, the audience falls for her too. The actor also fleetingly plays Judge Emily Barnett, a woman who will help Franky’s niece pursue a career path she never imagined.

Stephanie Vazquez plays Maddie Cabot-Bernal, the daughter of Franky’s sister  Jenny and Albert Bernal.  She’s a pistol, another blue fire kind of woman, emphatic in the correctness of her ideas and ready to take on the world.  The young Vazquez plays Maddie from girlhood to a pivotal moment in 2032 when both she and the country are about to change. She’s energetic, enthusiastic, sometimes overwhelming, but her evolution isn’t entirely convincing.

In his Zoetic debut as Maddie’s father Albert, Alayeto transforms from a tender caretaker to a man suffering from PTSD.  Moving from strength to despair, he heartbreakingly illustrates the post-service reality for too many veterans.  Alayeto also has a short scene as Senator Mendez, a politician who helps fuel the biggest change in Maddie’s life.

As for how the story is delivered, what it looks and sounds like, it’s rather strange and not as enveloping or inviting as most Zoetic shows. 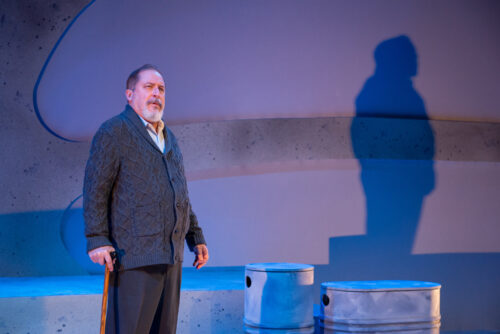 Robert F. Wolin’s abstract set allows for Delavega’s videos and Steven Covey’s projection mapping to offer up multiple elevated images when the play moves into a new year (that particular year is projected onto the stage itself).  While the photos and videos serve as timeline touchstones, they’re generally so numerous that you can’t possibly take them all in before they vanish.

Differently shaped faux metal containers dot the stage, serving as seats and places to conceal the props by designer Natasha Hernandez.  The containers may be utilitarian, but they’re also unappealing.

Marina Pareja’s costumes effectively assist in the play’s time travel, as well as commenting on a character’s age, taste and urban or rural lifestyle.  The only miss is Maddie’s schoolgirl getup, which looks out of place on Vazquez’s grownup figure.

Rebecca Montero’s lighting helps shape each scene – she’s a truly fine designer – but she comes up with an eerie golden glow in which to bathe the actors as they oh-so-slowly walk onto the stage from who-knows-where. Maybe they’re being summoned from Franky’s memories. Maybe the afterlife is that color.

Matt Corey has created the soundscape and woven in selected music, including some from composer Steve Reich whose work Meltzer describes in his program note as “pulses, counterpoints, minimal, complex and, at times, aggravating.” That’s quite right.

However, you should know this: Whether or not any design elements bother you, “American Rhapsody” is a new play worth experiencing.

McKeever makes you laugh, tear up, feel nostalgic. He captures the dynamics of a family bonded by love but struggling as its members face life-and-death challenges.  Those big moments that affect the country as a whole?  The playwright demonstrates how they claim a place in our memories, how they change us.  He finds the constants in the cycle of life, illuminates them, and makes you feel their resonance in your own experience.

WHAT: “American Rhapsody” by Michael McKeever