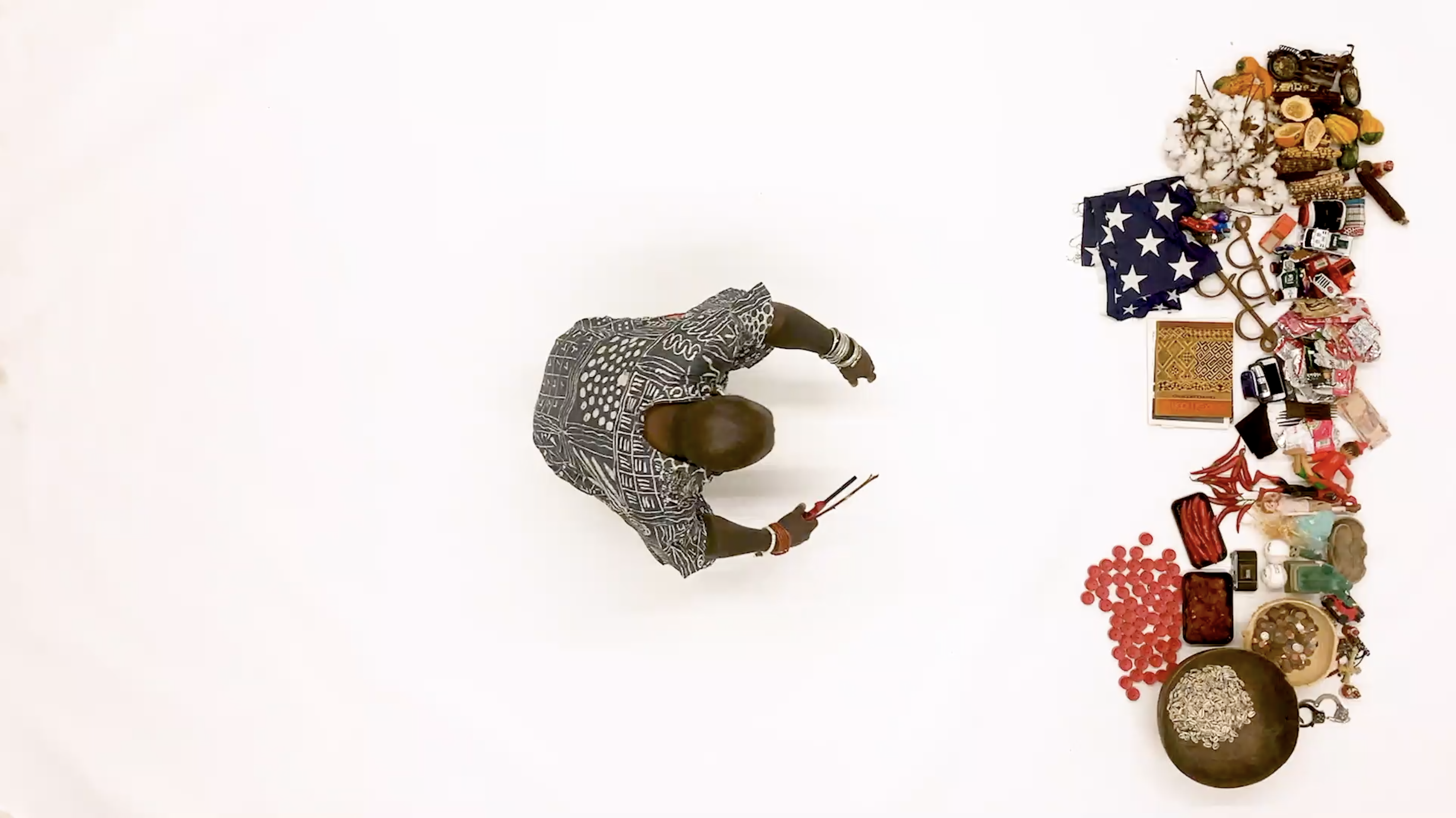 It is a bold statement, and Nigerian artist DaàPò Réo isn’t afraid to make it.

In an eye-opening video piece, entitled “ReincarNATION,” Réo offers searing commentary and often humorous observations on race, immigration and nationality. The symbolic use of African textiles, cowrie shells and Barbie dolls, interwoven with his thoughts on Kentucky Fried Chicken, provide a backdrop to a thought-provoking conversation that will take your breath away.

The pieces in “Witness” address issues affecting the African continent, its inhabitants and the Diaspora from a postcolonial perspective.

Réo’s porcupine statement references a recent case in which two former Maine police officers were sentenced to jail for beating porcupines to death. In the work, Reo wonders aloud about justice for the marginalized in this country. 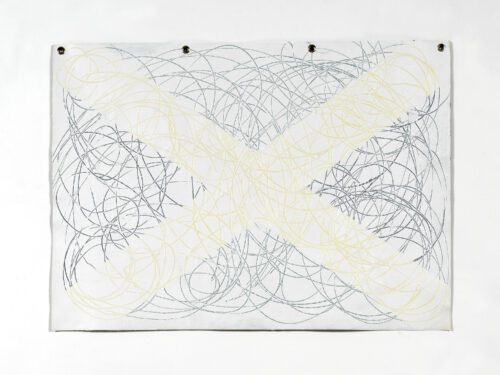 The artist is keen on reaching out to those willing to engage with his artwork.

“ReincarNATION,” he says, is much more than meets the eye.

“It’s very ritualistic. You are engaging with my ritual, and I am desperately trying to tell you a story,” he says. “A lot of people are interested in the craftsmanship of the piece, but every textile, every line, is a paragraph, a comma and an exclamation point.

“My work is mostly about rendering the texture of an experience as closely as possible, much more so than the aesthetic aspects of the work itself,” he adds.

Réo isn’t the only one at the exhibit who taps into different materials to deliver a message. South African artist Soal uses his artwork to breathe new life into items that are often mindlessly discarded. 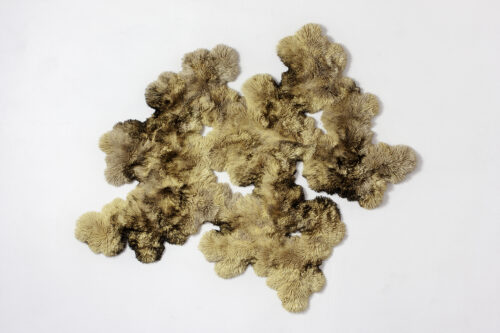 “There are a number of materials that I work with in the studio, but I think the most prominent would be bottle tops, toothpicks and then a combination of industrial materials such as concrete, rebar and whatnot,” Soal says.

His use of bottle tops began when he first noticed their sheer prevalence.

“Johannesburg itself is a city that was founded on a gold rush in the 1800s. Today, it’s known as Egoli, which is nicknamed the ‘city of gold,’ and essentially the only gold that I was seeing on the streets … was these gold-colored bottle tops that were thrown away and lying in the gutters,” Soal says. “So, this was a way for me to utilize this medium to examine the sociopolitical history of that space and the contemporary legacy of that mining history.”

With some luck and ingenuity, Soal was able to shoehorn his way into the manufacturing world of these bottle tops. A world that few people ever see.

“I managed to pull the ‘poor-struggling-student-artist-curious-about the-world card’ to get my foot in the door of this ridiculously layered, high-end security, 24/7 manufacturing plant. And I’m now friends with people in management who have just showered me with kindness,” he says.

Soal discovered, among other things, that the amount of waste materials produced is staggering. Bottle tops are routinely rejected due to exacting computer systems.

His piece entitled — “Even revolutions don’t cause change. Change causes revolutions.” —embodies his passion for upcycling. 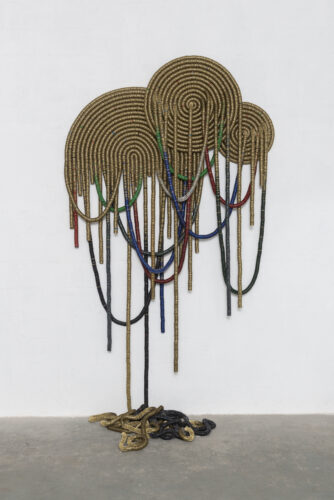 “It’s constructed from hundreds of thousands of discarded beer bottle tops, which has become a signature material within my work,” Soal says. “I think it’s quite an exciting piece, because it merges so many of the different forms and compositions that I’ve been playing with over six years.

“You have this relationship between order and chaos, these tightly wound spirals at the top of the piece that unravel and descend downwards,” he continues. “I think that the color choices are very specific. [It] incorporates royal blues and reds and greens, similar to what you’d find in portraits of Madonna and the apostles.”

The significance and use of symbolism and color is not lost on Ethiopian-born artist Shiferaw, whose pieces are part of his series titled, “Africa Paintings.” His technique of mark-making, coupled with African Diaspora flags, is a unique addition to the exhibit.

“The flags are underneath the painting, and you can barely see them. They’re painted over with white acrylic paint, and there’s some markings, some gestures, some lines, some scribbles, that allow you to see the overall image of the flag,” he says. “But when you’re too close to it, all you see is just this white paint, sometimes with some colors in it. The white covers up the entire surface to the point where you could barely tell. It’s sort of abstract.”

The pieces also harken back to colonialism.

“There’s this quality of mark-making, that is in conversation with painting and the history of the way Western abstraction is talked about, but in this particular case, these markings, the white coverup, is an act of covering up the flags of these African and Caribbean nations, simultaneously negating the forced division of the people and reimagines the new future for all black diasporas across the globe,” he says. “Africa, in the past, has historically been divided during the European nations’ scramble for territories, where they divided some of the biggest tribes into multiple nations so that the natives would not unite and become a power to take over their own land.

“It’s not until the 1950s and ’60s that we see independence from colonialism, but even then, that’s just an illusion of independence. We’re still financially dependent on the European market, and that is a form of financial colonization as well.” 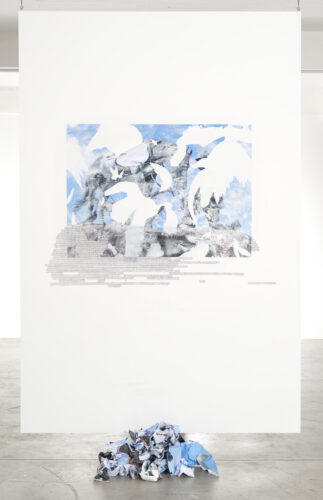 The exhibit aims to provide an avenue for continuous conversation about these topics and the role that African artists play.

As a South African of European descent, Soal says his participation in the exhibit may serve to add a layer of nuance when it comes to the topic of identity and how that plays a role in artistic expression.

“I think I can add maybe another dimension to the conversation that we’re currently having. And it kind of expands with these narrow boxes that we’re trying to fit into,” Soal says. “I think that all of our identities, in many ways, are in flux to some degree. And I think that it’s very few of us that fit into any particular box, or can be restrained or constrained by one.”

Réo also hopes the exhibit will provide a way for others to reexamine commonly held perceptions.

“When someone says they are an African artist and they make African art, I tend to ask: What does that mean? It’s a label that I struggle with a lot,” he says. “Art is art, the perception of the world. We are not just talking about Africa or Africans. Where does an African artist stand in today’s context in the art world? Where do we stand? What do we represent? What does our work, our art, our music, what does it do to the society? Does it affect it? Where do we go from here?”

The Piero Atchugarry Gallery has two locations: in Miami and in Garzón, Uruguay. It opened near the Design District neighborhood in December 2018 and has since been commited to supporting and presenting the work of local and international artists with an institutional approach.