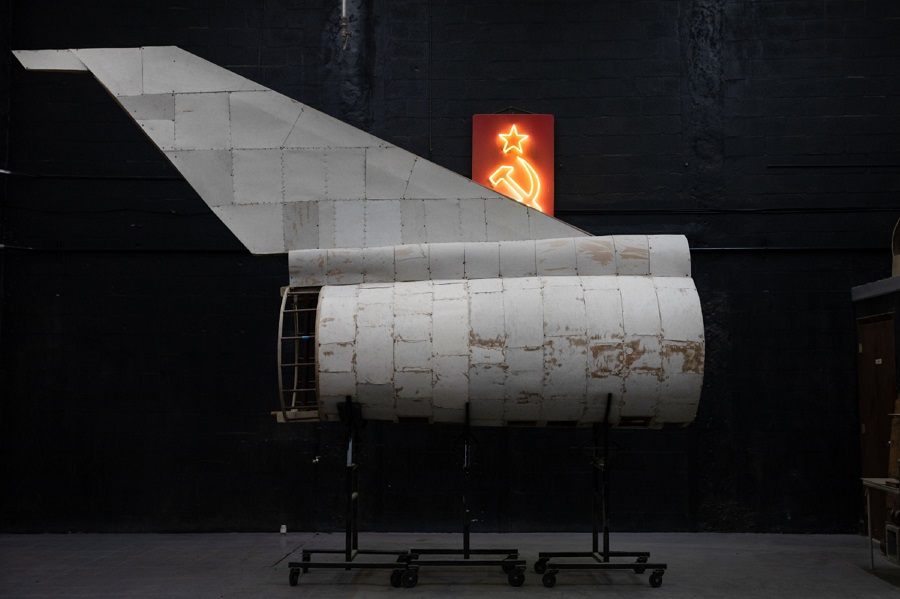 In a small project room on the second floor of Oolite Arts on Lincoln Road, a monitor displays a circle that resembles a sonar. Below that, a printer sporadically releases a large, colored abstract work on paper.

It’s meant as a visual representation of continuous flow of digital data moving between Miami Beach and Havana, Cuba. The work by Rodolfo Peraza, entitled “Pilgram: Naked Link 3.0,” is part of “Where there is power,” which is on view through Sept. 19 at the Miami Beach gallery

The exhibit, which runs through Sept. 19, 2021, features an array of works by 13 Miami-based artists, touching on topics of particular relevance in the current landscape of bipartisan battles, worldwide protests, border issues, gun violence, and policing disparities in the Black community. When viewed on a deeper level, the pieces are meant to be thought-provoking and unsettling.

“The exhibition creates an entry point into understanding some of the larger systems that govern our daily lives,” says Amanda Bradley, programs manager at Oolite Arts. “What ties every piece together are the deeply personal and political intersections of power.”

She and co-organizer René Morales, director of curatorial affairs and chief curator at Pérez Art Museum Miami, say the exhibit pieces represent the many ways that artists “access, spy upon, expose, memorialize, and occasionally trouble the machinations of power.”

Peraza’s “Pilgram” creates a trace route gathering all the IP addresses in Cuba tracking the flow of information. (IP is short for Internet Protocol, and each unique address identifies a device on the internet or a local network.)

“The radar creates a visualization map of the exact locations that the IP is pinging and prints it out,” Bradley explains.

Peraza’s work was created even before Cubans took to the streets in early July. In an effort to stop the flow of information into and out of the island, Cuban authorities reportedly restricted internet access. Bradley has noticed that the IP addresses have been less and less active because of these latest restrictions. 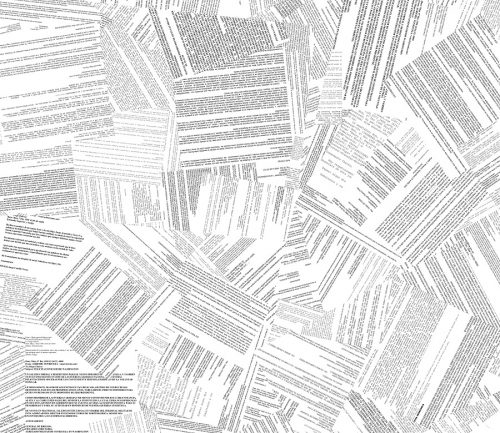 Artist Yucef Merhi’s wallpaper installations of digital prints on laser paper are plastered along Oolite’s curved walls at the entrance of the exhibit. The assemblage of emails and government documents may appear arbitrary, but Merhi invites the viewer to look closer at how he’s placed them piece by piece.

“Each single sheet of paper was laid consciously, even though it looks random,” Merhi says. “There is something poetic about the data and arranging some of the information that is out of sight and not reachable.”

This exhibit marks the first time that two of the pioneering digital artist’s installations exist in the same space.

On the left is his “Maximum Security” (1998-2004). At age 20, and using only a dial-up modem available at the time, Merhi hacked into the emails of Venezuela’s Hugo Chávez. Merhi says he was living in his native Venezuela and had information that Chávez was going to be a presidential candidate. The project traced his candidacy and early presidency but came to a halt, Merhi says, when Chávez’s official account was transferred to a new server.

While all the emails are in Spanish, the magnitude of the work speaks for itself.

As for any retribution for the hacked emails, Merhi says: “I have had some issues. Fortunately, I was and am surrounded by good people who understand what I am doing.”

Directly across from “Maximum Security,” on the other curved wall, is the more recent “No Fly Security” (2018-2019), another assortment of documents and emails that includes the non-public roster of individuals prohibited from flying in and out of the United States on suspicion of terrorist ties. There are many emails from citizens asking why they were stopped at the airport. One, from an 84-year-old woman from Lexington, Ky., describes how she was detained at a Florida airport.

“This is only the second time it’s been shown in public. This information is [supposed] to remain invisible, and that’s one of the strongest points of control,” Merhi says. 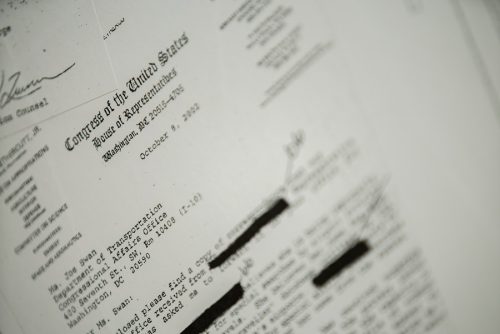 Together, both installations make up 1,500 documents of a “datagram,” a term coined by the artist, in which the aesthetic of the site-specific work examines the network of documents as they make their circuitous route through cyberspace.

“René and I talked about this intersection and for us having both Latin America and the United States was very important,” Bradley says.

The curatorial idea, which Merhi readily embraced, was that “No Fly Security” symbolizes the North (United States) and “Maximum Security,” directly across, represents the South (Latin America).

Across the gallery, and high above on the V-shaped ceiling, is a large photomural by Edny Jean Joseph that brings us into the present.

She and Morales got the idea to place Joseph’s mural on the ceiling while sitting on a ledge in front of the arched windows at Oolite.

“We talked a lot about where his work would go, because we wanted the scale to remain large,” Bradley says. “We looked up at the ceiling. In art history, the ceiling has represented wealth and power. We wanted to change the narrative of that and, as viewers look up, his work shifts the power dynamic.” 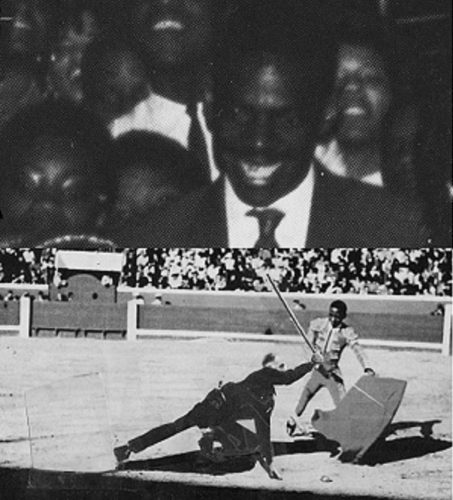 On one side of the photo collage, entitled “The Spectacle” (2020), Joseph reimagines a bullfight. The bull charging at the Black matador is a white police officer armed with a long club. An adjacent image shows the face of a smiling Black man, positioned to be “watching” the fight. Joseph says the face was originally a small piece of a larger photo, which he has zoomed in to make hundreds of times bigger than the original image. The matador image had been shown previously, but this is the first time he’s paired it with the smiling man looking on.

“I didn’t just want to put an image onto a wall. I wanted to make something that activated a spectacle,” Joseph says. “So now, the viewer looks up at the matador, and the man on the other side is also watching.”

Joseph says creating commentary by manipulating photos brings with it another type of power: “I think about myself in participating in revisionist history because of my ability to make images that never existed.”

In the middle of the exhibition space are pieces from the late Asif Farooq’s dream project, “Balalaika” (2012-ongoing), described by Oolite as a “slightly larger-than-life-size, fully-detailed paper airplane based on the Russian MiG-21 fighter jet.” When the artist died unexpectedly at age 40 in August 2020, the plane was about 85 percent completed.

The model of the 2-ton plane is in a warehouse space in west Miami-Dade County, where his studio team continues working to complete it.

Bradley says Farooq was wholly dedicated to making sure that every element was true to scale and that the plane would be fully functional when completed.

Farooq’s work is indicative of how the exhibition touches on power but not always in an obvious way.

“The plane is such a recognizable object of military control,” Bradley explains, adding that the sections they picked for this exhibition were intentionally pieces that give the plane its power.

‘WHERE THERE IS POWER’ ALSO INCLUDES:

Reginald O’Neal’s “My Father” (2018). This oil on canvas captures the first depiction of his father, who has been incarcerated since O’Neal was a child. There’s also an audio recording of one of the many prison phone conversations between O’Neal and his dad. 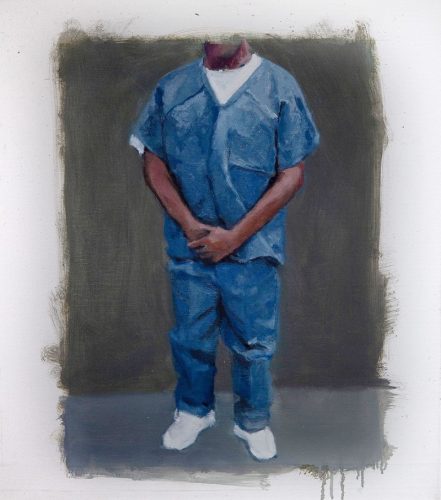 Chire Regans’ “When They Ask Me What I Did, I’ll Say Everything I Could” (2021). The charcoal, pencil and acrylic paint portraits depict young people who have been victims of gun violence in Miami. To date, Regans (known as VantaBlack) has created more than 250 portraits.

Tony Vazquez-Figueroa’s “Ourglass” (2019). Instead of sand, this hourglass has three minutes’ worth of slowly dripping crude oil.

José Álvarez’s “The Visitor” (2007). A single-channel video shows the artist, also known as D.O.P.A., playing the role of a medium channeling a 2,000-year-old spirit. With packed houses across the globe coming to see him between 1988 and 2003, Álvarez never accepted money for his shows. At the end of each performance, he would reveal that he was a conceptual artist whose purpose was to “use deception to reveal the truth.”

Agustina Woodgate’s “Emergency Exchange” (2019). The bullet-resistant acrylic box with one month’s supply of emergency drinking water pouches is a commentary on how money is made from commodities that are central to human life, Bradley says. 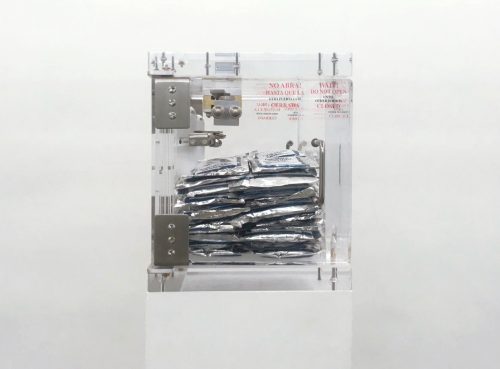 Judi Werthein’s “Brinco (Jump)” (2005). Werthein developed custom-made sneakers to start debate on the subject of illegal immigration along the U.S.-Mexico border. The shoes come equipped with necessities such as a map, compass, flashlight, money, medicine and documents. She provided them free of charge to people in Mexico and sold them for $200 as limited-edition art objects at a high-end San Diego store. Part of the proceeds was donated to a shelter for asylum seekers.

Francisco Masó‘s “The Architecture of Power, N° 7″ (2019). Made of acrylic on wood panel, his abstract geometric compositions are based on the colors and patterns that appear in the shirts worn by secret police in Cuba.

Antonia Wright and Ruben Millares’ “Where there is power, there is resistance” (2021). For the most recent piece in their steel barricade series, the pair added fluorescent lights to their installation sculpture. The series contemplates the connotation of barricades, from the innocence of crowd control at parades to the seriousness of the deployment to manage protesters. By replacing the steel, vertical bars with fluorescent lights, the artists aim to neutralize the barricade’s power, evoking the notion that the objects as an obstacle are easily shattered.

WHAT: “Where there is power” exhibition

WHEN: Through Sept. 19, 2021; appointments are encouraged