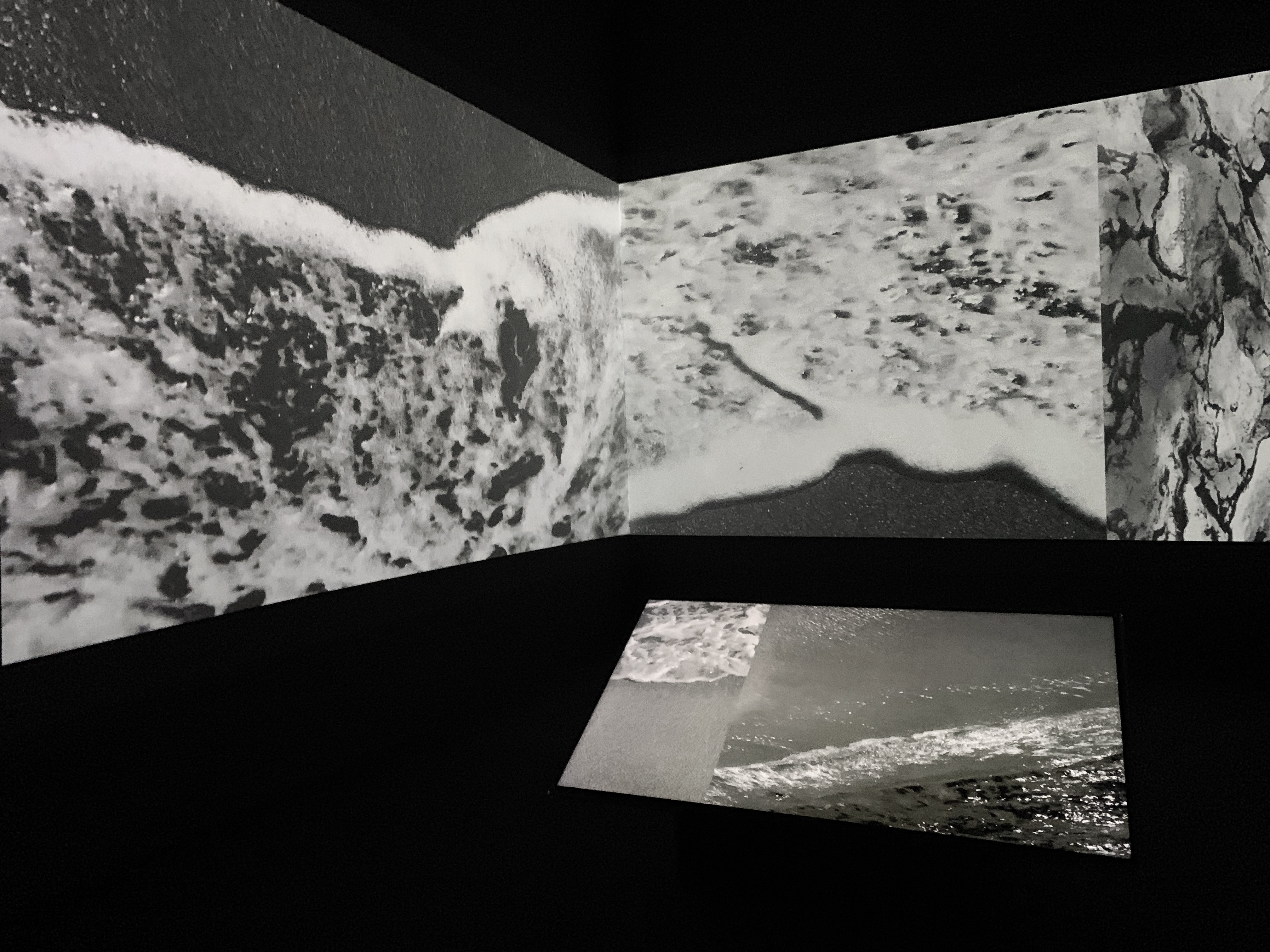 When contemporary Caribbean artists push back against tourist-friendly hoopla ubiquitous in their region, they invite us to look beyond the easy allure of cocktails with sexy names and satiny beaches shaded by palm trees. They respond to clichés peddled by the travel industry with visually challenging art. Their work celebrates diverse Caribbean culture but often finds inspiration in a troubled economic legacy, apparent still today, from the slave trade plied in these azure waters years ago.

The latest Caribbean-focused exhibit at the Pérez Art Museum Miami, “The Other Side of Now: Foresight in Contemporary Caribbean Art,” assembles work by 14 artists from the region and its diaspora. The show takes a slightly different tack from exhibits delineating connections between Caribbean past and present. It considers the future, as well, particularly following recent natural disasters in the region.

The Pérez has commissioned several new works for this exhibit. They include Lavar Munroe’s “Rehearsal for Reconstruction,” compelling for its translucent overlay of figures that mysteriously seem to shift in space, resisting predictable definition.

“Certainly, a lot of people say that the Caribbean is ground zero for climate change,” says María Elena Ortiz, who curated this show in collaboration with scholar Marsha Pearce of University of the West Indies in Trinidad and Tobago. However, Ortiz adds, “I was talking to an economist last year, and he was mentioning how the biggest issue to the Caribbean is actually disease and lack of food.”

Ortiz says the premise of the show is to explore “what a Caribbean future might look like.” The title “The Future is Now” comes from “The Last Warner Women,” a novel by Jamaican writer Kai Miller that tells the story of a woman who has the protective gift of “warning” others of impending catastrophe. In that novel, Miller writes, “every story stretches in two directions—creeping into a past, galloping toward the future.”

And what might that future look like? “I think the future of the Caribbean has to rely on personal autonomy,” Ortiz says, speaking the day before Puerto Rico Gov. Ricardo Rosselló announced his resignation, following massive protests.

The Caribbean future is “beyond the foreign powers,” she says. “It has to rely on individuals thinking, ‘I don’t need this daddy figure’ or this kind of figure who hasn’t benefitted our local level. That person needs to be out, which is what’s happening in Puerto Rico as we speak.” 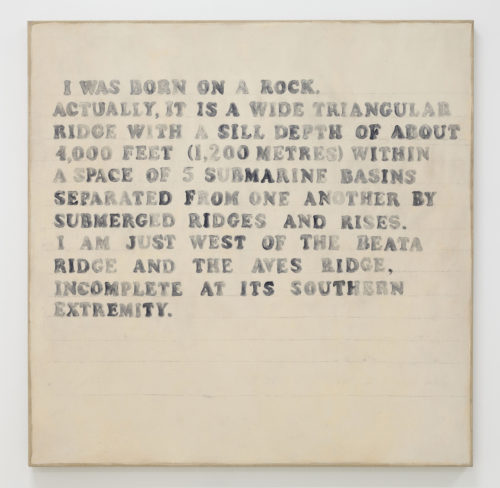 Jamilah Sabur’s “This Is Where I Was Born” is featured in “The Other Side of Now” at Pérez Art Museum Miami. Photo courtesy of the museum.

In the exhibit catalog, artists write about their visions of the Caribbean’s future, suggesting links between their ideas and their art. Unfortunately, some of the artists’ works don’t correspond with their well-intentioned words and seem unsuited to this context. That’s the case with abstract mixed-media works by Manuel Mathieu and a grouping of ceramic plates by Alicia Milne.

Deborah Jack writes that the future should be “one where we see ourselves as a center and not on the periphery. The richness of language and cultures that have come together have created a unique space for creative expression.”

Jack’s three-channel video and sound installation “Saltwater Requiem … and Then the Wind Whispered, Sometimes the Aftermath Is the Storm” is exceptional. Perhaps the most impactful in the exhibit, it captures the ocean’s powerful sweep with black and silvery-white imagery of waves roiling beaches. Occasionally, geometric forms suggesting architectural building blocks appear and disappear above the waves.

The soundtrack is meditative and eerie, melding sounds gathered from the Atlantic Ocean, the Caribbean Sea and a Methodist hymn Jack remembers from childhood. Her video employs various perspectives, so that sometimes the motion of sea meeting land seems to happen upside-down or sideways. It unfolds the ongoing spectacle of a place being submerged and regenerated, akin to the Caribbean’s age-old history with severe weather, but evoking a new urgency.

Jack writes in the exhibit’s catalog that the region’s future can be described as a kind of “chaotic metamorphosis.” She portrays this cycle of disaster and recovery as immediate, visceral and swiftly evolving.

Chaos tempered with ingenuity is the dominant theme of the installation “Échafaud (Scaffold)” by Louisa Marajo. It incorporates drawings, photos and wooden pallets. Small sections in this work are unified by distinct compositions of repeating form and color, underscoring the deceptive sense of overall chaos.

Part of his long-standing “Bundlehouse” series, Nyugen Smith’s 2019 mixed-media and found-object assemblage imagines a map where age-old boundaries no longer exist and continents drift together, forming yet another new world, foretelling a marriage of hope and audacity.

Another creative approach to geography, Charles Campbell’s intriguing sculpture presents a geometric, chiefly abstract and three-dimensional map of Jamaica’s Cockpit Country. The area is famous for its limestone hills and ridges where runaway slaves, known as Maroons, settled after escaping plantation life. His sculpture aims to propose a future community of imaginative resourcefulness, but including the artist’s aerial photograph of the area (reprinted in the catalog) would have provided a fuller context for his sculpture.

“Cognitive,” a large-scale figurative painting on drywall by Sheena Rose, occupies one gallery wall with its fanciful figures in black and white. They stage a joyous, eccentric parade.

Jamilah Sabur is the sole Miami artist represented here. Her straightforward, text-based piece, “This Is Where I Was Born,” is a gut-punching coda for the entire exhibit. It begins, “I was born on a rock,” and follows with an oceanographic description of waters near her native Jamaica. This slim text robustly defies cultural stereotypes and clichés.

Top photo: Deborah Jack’s sound and video installation “Saltwater Requiem … and Then the Wind Whispered, Sometimes the Aftermath Is the Storm” includes sounds gathered from the Atlantic Ocean, the Caribbean Sea and a Methodist hymn. Photo courtesy Deborah Jack.

The museum seeks community participation to record what daily life was like as South Florida endured a barrage of historic events, including the pandemic, BLM protests and elections.
Continue Reading

The last of Miami-based artist Mette Tommerup’s trilogy to be on view through Jan. 23.
Continue Reading

Collector Jorge M. Pérez on his most recent art obsessi...