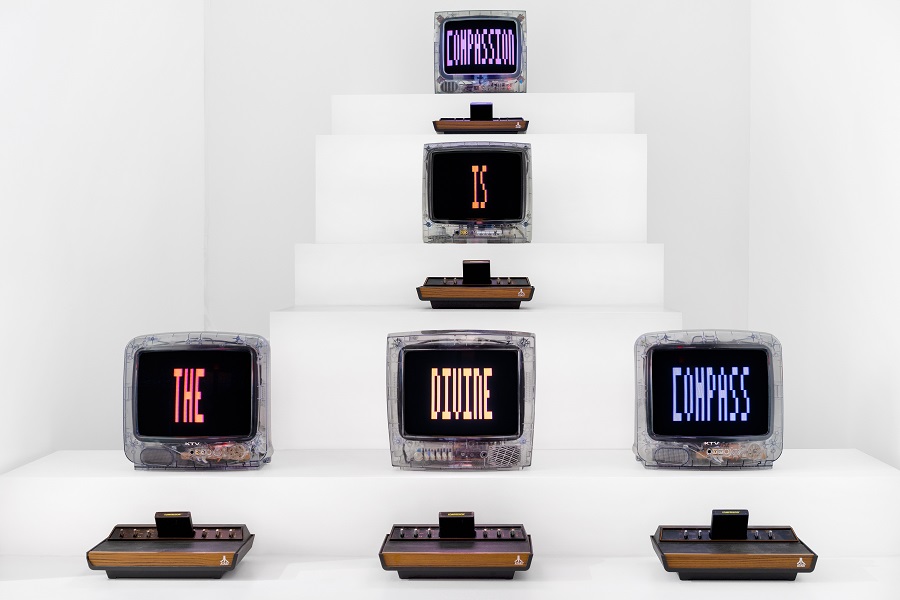 Yucef Merhi’s “Compassion” is part of a new exhibit at The Bonnier Gallery. (Photo courtesy of Zachary Balber)

With its new exhibit, “Yucef Merhi: Open,” The Bonnier Gallery invites visitors to open their eyes, hearts and minds to digital art — to feel its energy and go beyond the buzz.

“There has been a lot of buzz and conversation about digital art as of late because of NFTs,” says gallery co-owner Grant Bonnier, referring to non-fungible tokens — those digital assets (from music clips to photos to artwork) that exist only in cyberspace and are bought and sold using cryptocurrency. “For a lot of people who are new to the art world, they think that because of NFTs, digital art is something new and it’s not.”

They may also see it as “something that is cold and sterile,” says Bonnier. “With Yucef’s work, it’s very much not.”

The Venezuelan-born, Miami-based Merhi infuses a certain energy into what could be considered vapid technological components and gives them life. The exhibit features 15 pieces from the artist, poet and computer programmer. 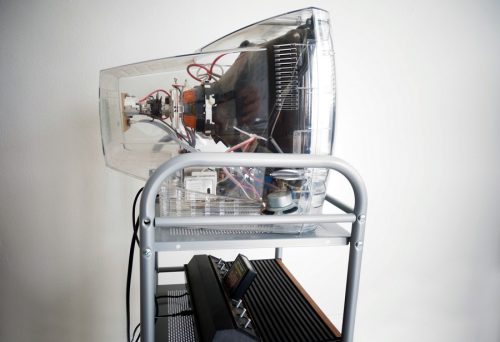 The artist uses TV sets with clear casings in some of his works, including in “Atari Poetry VI” (2006). The TVs were originally used in prisons. (Photo courtesy of The Bonnier Gallery)

“Cathexis, it’s the art of instilling energy into an object, and that’s what Yucef does,” Bonnier explains, adding that much of what’s included in “Open” is work that is also steeped in poetry. He says The Bonnier Gallery, which he opened in November 2018 with wife Christina in the Miami neighborhood of Allapattah, has a “particular interest in works that find themselves at the intersection of visual art and language.”

“Open” presents a mix of ideas, a “critical mid-point” of Merhi’s career, according to Bonnier. Some works are indicative of Merhi’s very early explorations, while others show the evolution and metamorphosis of the 44-year-old’s decades-long practice.

When he received an Atari console as a child, he turned it into a programmable computer. That was the beginning.

“When I was a kid, I felt like I could communicate with Atari machines,” Merhi says. “Electronic toys were the way I was able to build my reality.” 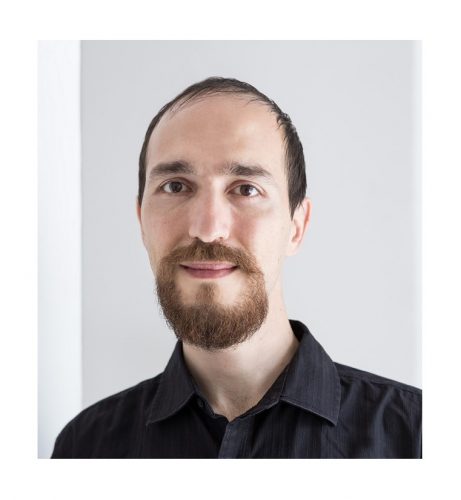 “Compassion,” the largest piece in the exhibit and one of the newest, features five television sets and five Atari 2600 game consoles and cartridges, which Merhi programmed to display words. Set up on a rising staircase, the top TV shows the word, “Compassion,” with the TVs on the next steps completing the statement: “Compassion is the divine compass.”

Merhi says he spent all of 2020, “the year of the pandemic,” building the work. The intensity of creating “Compassion” came from coding the Atari cartridges.

“They take several months each to build, and there were five of them,” Merhi says.

The 13-inch RCA television sets had been manufactured specifically to be used in prisons, with clear back panels that are meant to ensure prisoners cannot tamper with the electronics.

“I also spent time meditating in front of them, because I wanted to put energy into the objects and to make peace with the people who had these TVs,” Merhi says. “I also wanted to cleanse the past out of them and especially my own darkness, my own shadows.” 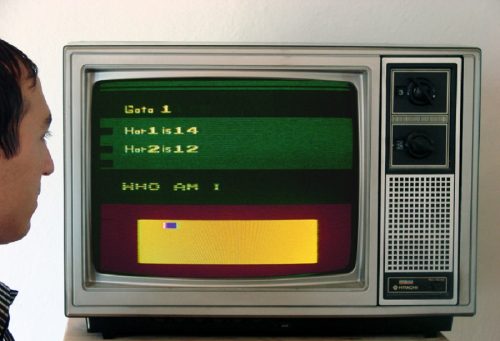 A computer is programmed to create the question “Who Am I?” in Yucef Merhi’s “Atari Ex Machina” (2007). (Photo courtesy of The Bonnier Gallery)

The idea was to reclaim the televisions with positive meaning, according to Merhi.

“Compassion” is the grand finale and is perhaps the most powerful piece in the exhibit. It also incorporates the early Atari work that gained Merhi acclaim. He’s coined a word for the use of the Atari systems and the TVs: retrocycling. Rather than the old consoles, computer boards and TVs ending up in a landfill, he gives them a new life and a new purpose.

This idea is what grabbed the interest of the Massachusetts Institute of Technology (MIT), which selected Mehri for a fellowship as part of its MIT Open Documentary Lab. For the fellowship, he will be investigating how to reduce electronic waste that comes from obsolete technologies — such as Atari consoles, cassette and CD players, TVs and slide projectors — and have been filling up dumps for decades. 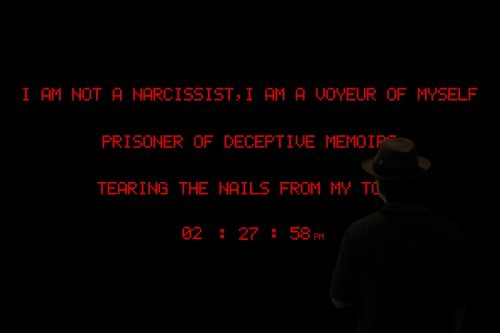 “The Poetic Clock: 2.0” (2020) transforms time into poetry and generates 86,400 different poems every 24 hours. (Photo courtesy of The Bonnier Gallery)

Another grand work in the “Open” exhibition at The Bonnier is “The Poetic Clock 2.0” (2000), a digital time machine that displays three lines of poetry. Merhi created software so that, at different times, each line will change. The top sentence changes every hour, the second verse shifts every minute, and the third every second. The digital artist here is displaying language through the movement of time with a new poem constantly being generated.

Political commentary is also prevalent in much of his art. In “Artificial Stupidity” (2019), for example, what looks like a friendly video arcade game, upon closer inspection, features Venezuelan leader Nicolas Maduro chasing flags. As the user moves the character of Maduro, who is the computer game’s equivalent to Pac-Man, the end game is to have him eat the flag and watch it be expelled into a poop emoji, or “transformed into digital excrement,” Merhi says, “alluding to the systematic destruction of the country.”

Merhi recently had two pieces on display at Oolite Arts as part of its group exhibition, “Where there is power.” His work, “Maximum Security” (1998-2004),” consists of hacked emails from Venezuela’s previous leader, Hugo Chavez, while “No Fly Security” (2018-2019) is composed of an assortment of documents and emails that includes the non-public roster of individuals prohibited from flying in and out of the United States on suspicion of terrorist ties. 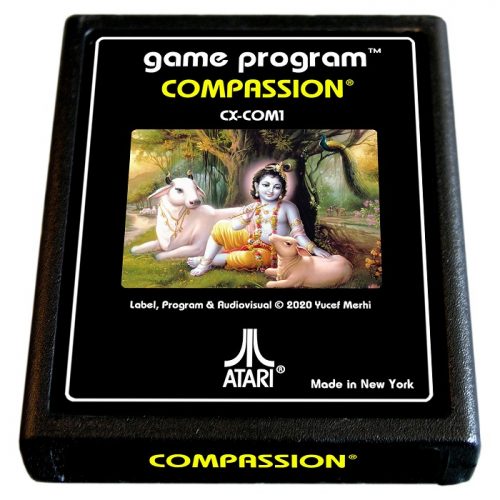 One of the custom programmed Atari cartridges created for “Compassion” by Yucef Merhi. (Photo courtesy of The Bonnier Gallery)

A smaller study, which was the genesis for “No Fly Security,” is on exhibition as part of “Open.”

Bonnier says all of the works are especially thought-provoking, and he invites visitors to spend time with each. He walks over to a retro Hitachi television set displaying computer language on the screen. Two lines move back and forth before spelling out, “Who Am I?” It’s a work entitled, “Atari Ex Machina” (2007).

“Every time the pixels meet, the question appears. If you stop to think about the question, is it Yucef asking, ‘Who am I?’ Is it the Atari asking itself the question? Or is it the viewer?” Bonnier says. “Just the nature of sitting with and engaging with an idea, that’s no different than the way we would [look] at an abstract painting.”

SAFETY PROTOCOLS: Facial coverings should be worn inside the gallery, and appointments are encouraged.