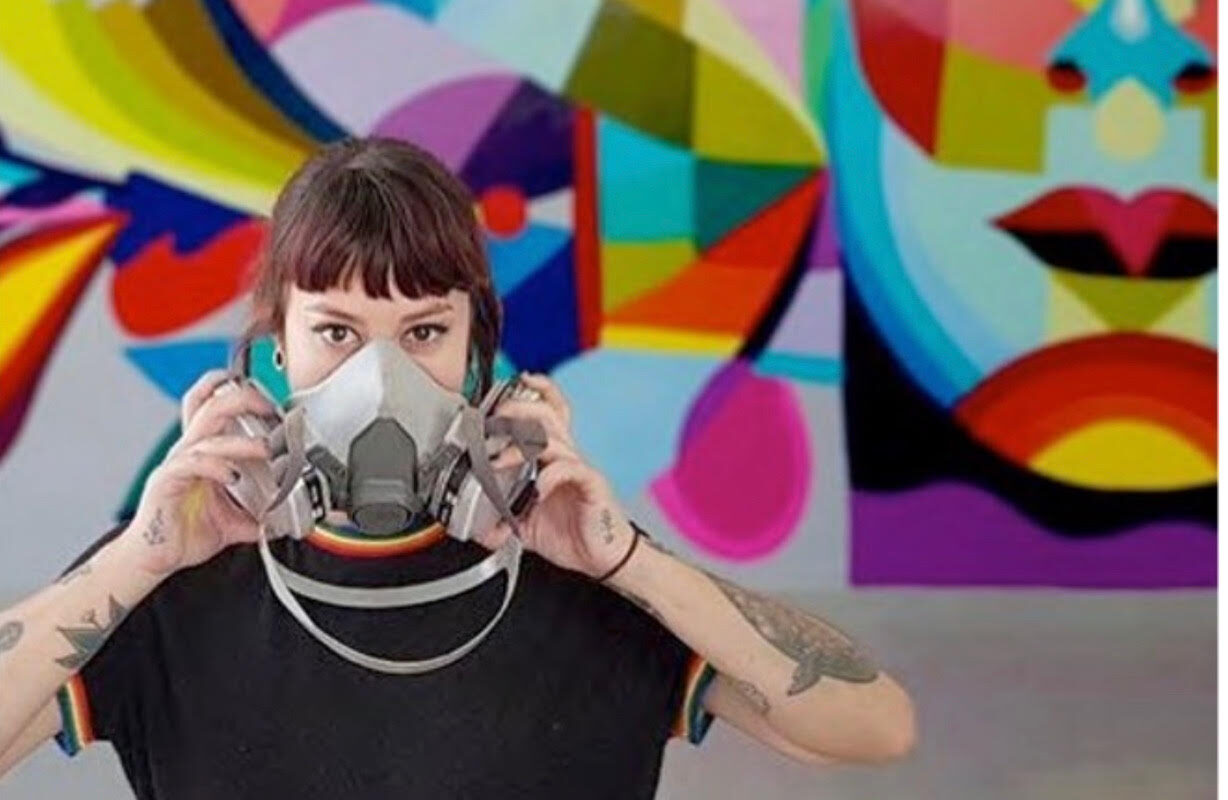 She’s one of the most prominent artists on the Bogota graffiti scene. Diana Ordoñez, known artistically as Ledania, brings her art to Miami’s Museum of Graffiti in a show through November in Wynwood. (Photo courtesy of the artist)

Graffiti. The word itself can cause a strong reaction. Many see it as the defacement of public walls and buildings. But graffiti has arrived to become something else — art.

“So many people are focused on whether (the art) is legal or illegal and they are not looking at the sheer talent. When you look at Ledania’s work, you see pure talent with aerosol,” says Allison Freidin, co-founder of the Museum of Graffiti in Wynwood. 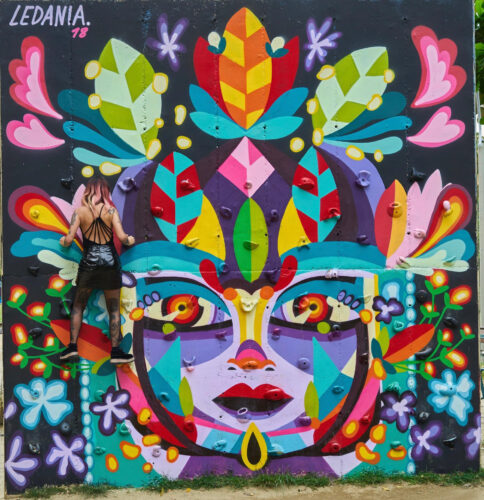 Diana Ordoñez, known artistically as Ledania, began graffiti painting 15 years ago on the streets of Bogota, Colombia. (Photo courtesy of the artist)

“The most significant part (for me) was that I didn’t want only people who knew about art to see my work, but everyone who takes up the same space I do,” says Ordoñez. “It’s a motto I took upon myself — to take over the walls that were built to divide people and spaces and use them as a unifying piece through art and color.”

The 34-year-old has taken the motto to heart throughout the world in the past decade, displaying her murals in places such as the Artscape Festival in Sweden and the Curitiba Biennial in Brazil. Now, she is bringing her solo exhibition, titled “Ledania: Private Spaces,” indoors to Miami’s Museum of Graffiti.

While “Ledania: Private Spaces” is only the second solo show of a female artist at the Museum of Graffiti, which opened in 2019, Freidin says the mostly male-dominated world of graffiti art is opening up to women. 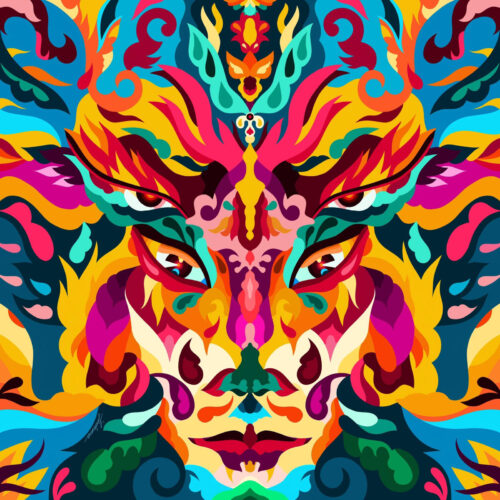 “It used to be really rare (to have female graffiti artists), but now, as a new generation of writers is coming up, there have been certain artists like Lady Pink (first female artist to show at the Museum) who have paved the way for more women to come,” says Freidin.

Ordóñez says her experience as a writer (what graffiti artists are called since graffiti is a letter-based art) has changed over time, not just as a woman in the field but as an artist.

“You discover new tools, and you start growing even more because you have to start climbing higher places and turn in art at higher elevations, so you’re dealing with climate change and wall texture changes (that) make the art dependent on improvisation,” says Ordoñez, who uses primarily aerosol spray for her art.

“That is one of the reasons I love graffiti because I am not someone who plans most things out. I just wait to see how the improvisation moves the piece along.”

Unlike her previous work, she says the Miami exhibition brings “part of Latin America” with her into a much more private space. She says for the exhibit she chose to pair vibrant colors, florals, and forestry with the feeling of nature that would be a natural fit in a place of rest.

“It will be a fusion of what I started with, which is graffiti, but it is very important to me for people to be able to bring a piece of this outside artwork into the spaces that are the most private, which is the home, office or wherever it is that they rest,” she says. 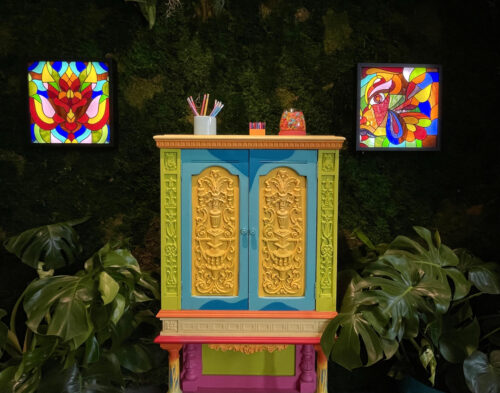 The conceptual aspect of “Ledania: Private Spaces” is important to note. It isn’t just a matter of coming to look at paintings on a wall, but rather becoming a part of the art, according to Ordoñez. That collaboration between spectator and artist includes an interactive and immersive site-specific installation that brings a more three-dimensional quality. It’s this excitement of depth that runs throughout all the work she creates.

“Art is really the only way a person has freedom,” she says. “A person who can express themselves freely through any kind of art, whether it’s music, theater, painting, or whatever helps you express yourself in the most sincere way, helps (us) not feel limited by the standards that society imposes. For me, art and culture and everything within are what gives people breath within this grid-like existence that we live day to day.”

She says her inspiration comes from the people she meets, either working in a public place or in the many countries she visits.

“I am used to painting with the noise on the streets, the onlookers walking by and talking to me and it’s almost like they are taking the art out of me, so (inspiration) can happen at any moment, at any time. But what takes the creativity to another level is learning about other cultures,” says Ordoñez, who says she spends about 10 months out of the year traveling.

She cites Asia, Japan and Singapore, specifically, as sources of great creativity. 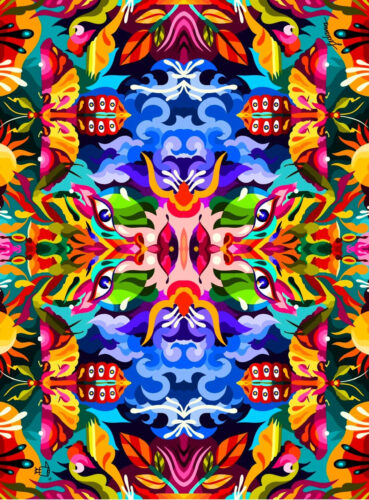 It’s no surprise that Ordoñez derived part of her artistic name from Leda, the famous female seduced by Zeus in Greek mythology, and whose Greek origin means happy.

Ordoñez says she is happy that she is able to create a life and has found success doing her art, something that her parents, both artists, dreamt about but never fully realized.

“My dad is a muralist, my mom is an artisan and they both studied art, but on their own time because they liked it, but they didn’t pursue it because they thought it was too complicated to actually make a living off it,” she explains. “At the beginning, there was talk about (me) pursuing graphic design or public relations, just somewhere where a paycheck was more of a sure thing, but as much as I tried, I couldn’t bring myself to think that way. I just had to be more free.”