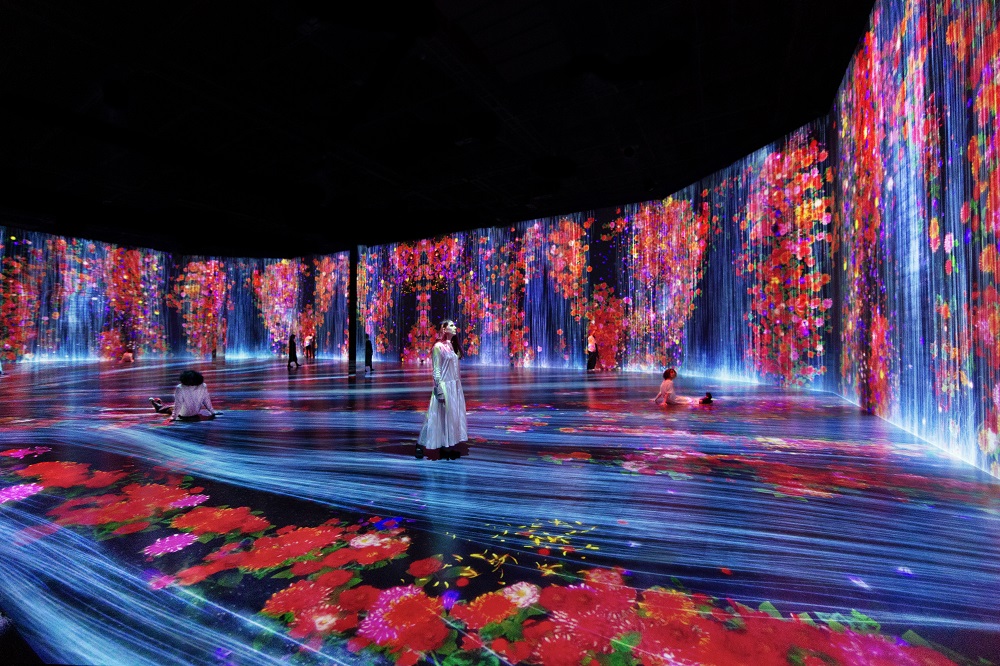 “Flowers and People, Cannot be Controlled but Live Together – Transcending Boundaries, A Whole Year per Hour” (2017), by the art collective, teamLab, is part of the Superblue Miami experience. (Photo courtesy of Pace Gallery)

Cover up in a rain poncho, booties and goggles, and enter a space filled with bubbles that is meant to recreate being lost in the clouds. Then, pop into a series of huge rooms with black backdrops where computer-generated flowers blossom in and out as trippy music plays in the background. In another space, behold a giant movie screen that shows a dizzying film before opening to allow visitors to explore a two-story maze of mirrors.

It’s all part of Superblue Miami, the first of many planned experiential art centers set to open around the country. With the tagline “created by artists, completed by you,” the expectation behind this immersive art extravaganza in Miami’s Allapattah neighborhood is that of the visitor becoming a part of the work.

Yet, it can feel like a confusing tangle of disjointed installations, instead leaving you questioning how immersed you actually feel after the hourlong experience.

Part of the disjunction comes from the odd juxtaposition. All of the inaugural installations in the exhibition, entitled “Every Wall Is a Door,” deal with elements of nature: clouds, flowers, light and trees. But artificiality abounds – computer-generated images of flowers; soap bubbles that form clouds in an enclosed room where visitors slog through while suited up in plastic gear; a shallow pool where the image of the visitor is distorted into a shadowy tree-like figure. Nothing seemed connected with the natural.

In the lobby area, visitors first encounter “Meadow,” created by Amsterdam-based Studio Drift. The beautiful kinetic sculptures are upside-down mechanical flowers, which open and close, but the visitor is merely looking up at the ceiling to take in the intricate design and its movement.

For an extra fee, visitors may enter “Massless Clouds Between Sculpture and Life,” created by the art collective, teamLab. 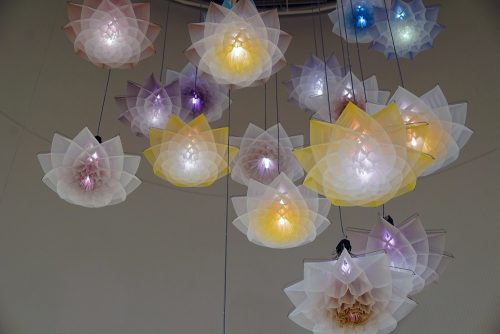 “Meadow” is the creation of Amsterdam-based Studio Drift. (Photo courtesy of Studio Drift)

Soap (the guide pointed out that organic soap is used) forms the bubbles that stream out of overhead chutes and from metal pillars perforated with holes. As explained by teamLab, the bubble-bath clouds are a floating sculpture where visitors immerse their bodies and then “the sculpture will break and naturally repair itself like a living thing.” It is fun playing around in the bubble room, much like splashing around in a tub without water. It didn’t, however, render an effect of floating in clouds or of being part of a sculptural creation.

(Visitors have the choice to wear a poncho and booties, which is suggested, as the soap has a sticky residue. Lockers also are available to keep purses, cellphones and other valuables dry, much like those found at a theme-park water ride.)

After discarding the “wet gear,” visitors may head to the next installation, also by teamLab, which features computer-generated flowers blooming all around. Apparently, when one steps on the flowers projected on the floor, the petals are meant to scatter and wither. But without clear explanation, some may not know they must stand in place to make the installation interactive.

Where to go next? A holding area awaits and visitors are instructed to don another pair of disposable booties, so as not to mar the floors inside the next two exhibition rooms.

Following a guide’s brief introduction, visitors descend black stairs into a large, white room for “AKHU,” created by experiential artist James Turrell. The white floor slopes downward in the spatially odd enclosure. On the back wall is an oversized oblong of light, which gradually changes color from pink to green to tan, tinting the room. 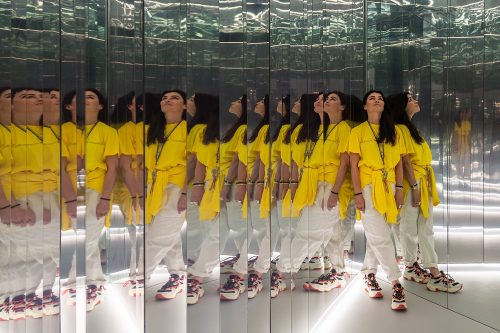 As part of Es Devlin’s “Forest of Us,” a film first plays, then the walls open up to reveal an infinity maze. (Photo courtesy of Andrea Mora)

Turrell, a pilot with a degree in psychology, refers to his light installations as “Ganzfeld” (for the Ganzfeld Effect, which – used in psychology – happens when the brain reacts to a lack of visual stimulation).

To fully experience Turrell’s work, one must linger with it for a while, to take it in and become immersed in how he plays with space and light. Turrell’s work requires a degree of surrender, but the experience of “AKHU” is stunted since, after 10 to 12 minutes, visitors are ushered out to the next installation.

The final experience is Es Devlin’s “Forest of Us.” A three-minute film plays, with a whirling array of people, nature and bronchi, and then the walls open up to reveal an infinity maze that its creator says is meant to resemble the human respiratory system. One couldn’t help but recall Yayoi Kusama’s “Infinity Mirror Rooms,” which were displayed at ICA Miami during 2019-2020. But where Kusama’s illusion created endless reflection, Devlin’s twists and turns and the harsh lighting have  become more of a selfie spot, as visitors line up against the mirrored tiles or lay on the floor looking up into the mirrored ceiling to snap their photos.

After more than a year of soulless disconnection amid the pandemic, of viewing art through Zoom screens, Superblue Miami should have allowed us to break out of the confines and once again embrace a feeling of connectedness. However, despite the obvious longing to involve and envelop its visitors in the works, the aloofness that looms over the inaugural exhibition makes everything disappear into the darkness of the space. And starting out by being covered head to toe in protective gear doesn’t leave much room to feel fully immersed in art.

WHAT: Superblue Miami’s “Every Wall Is a Door”

WHEN: Ongoing through at least 2022