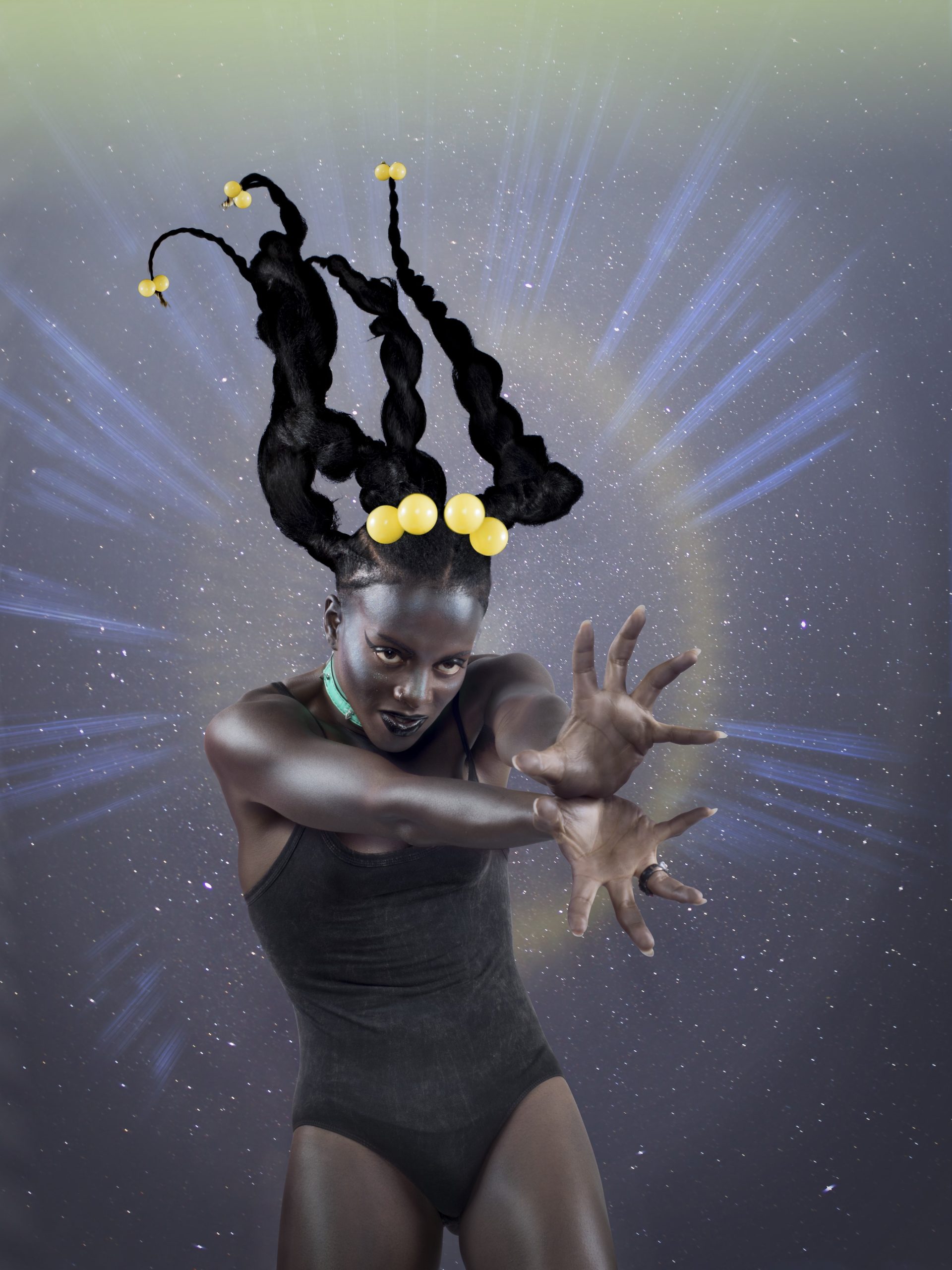 Juliana Huxtable’s “Lil’ Marvel” (2015) is part of “The Body Electric” exhibit at the Museum of Art and Design at Miami Dade College. (Courtesy of the artist)

A strange, life-saving paradox pulsates at the heart of “The Body Electric,” an ambitious contemporary art exhibit at the Museum of Art and Design at Miami Dade College. It tackles controversies concerning race, class and gender, while showing how art and technology have converged since the mid-1960s.

In its title, there’s an unexpected nod to 19th-century American poet Walt Whitman’s famously sensual and exuberantly titled poem, “I Sing the Body Electric,” celebrating the union of body and soul.

Yet voices in this Miami body electric are surprisingly soft.

“The Body Electric” brings together 59 artists from several generations. Influencing their art are sights and sounds from the historic impact of television and the 1960s Sony Portapak, the first widely available, portable video-recording system that could be carried by one person. There’s a significant video presence — the exhibit presents 34 works in video with sound, out of 90 individual works on display.

But here’s the paradox for an exhibit with so much video: For life-saving reasons brought on by the global pandemic, headphones — which allow visitors to hear videos privately without interrupting the experience of others — are banished. As a result, the sound in videos is available to all visitors, but it is by necessity less than optimal, except in the few cases where a video installation merits a single gallery. 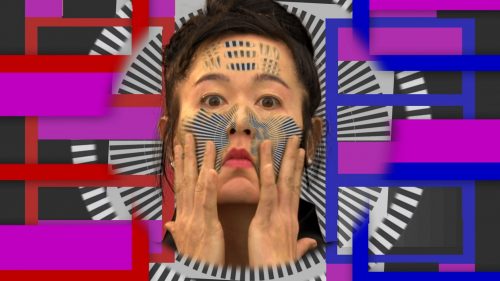 It’s often tough to parse remarks from Black artist Howardena Pindell in her seminal 1980 video, “Free, White and 21,” as she describes encounters with racism and sexism. At one point, she wraps her head in bandages to symbolize being silenced and treated as invisible.

An excerpt from the 1986 video, “What You Mean We?” by performance artist Laurie Anderson, shows her in what appears to be a zany dialogue with a chain-smoking digital double, but faint sound can render her performance largely sterile.

Such frustrating experiences were never meant to happen. Before traveling to Miami, “The Body Electric” first opened during the heady pre-pandemic days of 2019 at the Walker Art Center in Minneapolis, which organized this exhibit.

After Minneapolis, the exhibit’s next stop was Yerba Buena Center for the Arts in San Francisco, where it closed in February 2020, shortly before life as we used to know it shut down. The exhibit then opened in November in Miami at the Museum of Art and Design at MDC as a pandemic ravaged the globe, necessitating near seismic changes for many cultural institutions. 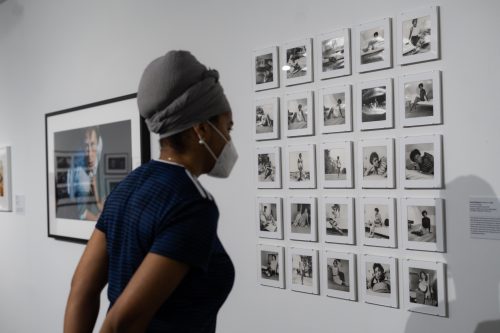 Experienced today in Miami, “The Body Electric” anticipates how many of us have lived much of our life through computer screens during lockdown and quarantine. Zoom technology has replaced physical meetings, sending forth endless electronic versions of human bodies.

Seeing this art through the unintended lens of a pervasive dependence on technology to navigate millions of social encounters conveys new urgency. As more technology pervades daily life, the art illustrates how we invite more surveillance, more ethically questionable manipulation of information.

Curiously, that dark potential isn’t really apparent in pioneering works by Nam June Paik, considered the founder of video art and widely known for wanting to “humanize technology.” “The Body Electric” includes his iconic 1969 “TV Bra for Living Sculpture.” Avant-garde cellist Charlotte Moorman wore a “TV bra” instead of a real one while playing the cello in a five-hour performance in a New York gallery.

While the TV bra seems almost anti-climactic as an object, with its ungainly welter of Plexiglas boxes and vinyl straps, a 1971 silent film transferred to video shows her legendary performance. Her body truly becomes a kinetic sculpture merged with technology.

Produced much later, “Surface Tension” by Rafael Lozano-Hemmer may have humanized technology by creating a giant video eye, but its impact is ominous. This nightmarish, oversized eyeball tracks the museum visitor walking near the video.

According to the wall text, Lozano-Hemmer was inspired by camera-guided bombs raining destruction on Iraq during the Gulf War in 1991. During the Iraq War beginning in 2003, he reformatted “Surface Tension.”

Today, it’s a metaphor for constant 21st-century surveillance, such as data mining conducted by social media and internet sites. As such, it reminds us how Facebook posts were used to identify participants in the Jan. 6 attack on the U.S Capitol. 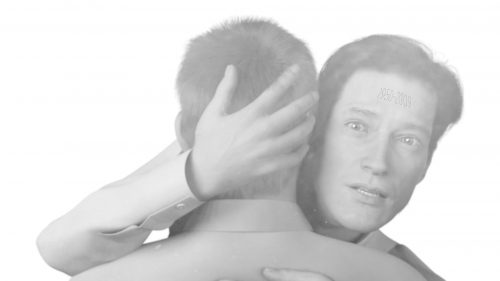 Black-and-white photographs by Lorna Simpson also take cues from images of women in the media. Simpson’s 2009 “LA ’57-NY ’09” offers a witty critique of vintage photos of Black pinup models. They seem indebted to white notions of beauty popularized in movies. Simpson was said to be inspired by a 1957 photo album purchased on eBay that featured anonymous Black women in Los Angeles posing flirtatiously. In 2009, she took portraits of herself posed in similar fashion, presenting them side by side, shining a light on dated images of “prettiness” from another era.

The 2015 self-portrait, “Untitled (Lil’ Marvel),” by Juliana Huxtable possesses the fierce hustle of a Marvel Comics heroine highly seasoned with a Black supermodel’s sexy confidence. A transgender artist, Huxtable is known for creating gender-fluid avatars, electronic images that can be manipulated by computer users such as video gamers.

Ed Atkins dives into avatar technology as well. His 2014 “Happy Birthday!!” in HD video uses computer graphics to create a robotic male figure that seems anything but happy while embracing another robotic figure.

Clever computer-generated scenarios contrast with chilling commentary on surveillance technology in Hito Steyerl’s “How Not to Be Seen,” commissioned for the 2013 Venice Biennale. Relevant today, it presents a mock tutorial with absurd advice for eluding detection in a world of watchers.

WHAT: “The Body Electric”

WHEN: Through May 30. Public hours of exhibition are 1-6 p.m. Wednesdays and Fridays-Sundays, and 1-8 p.m. Thursdays.

COST: Museum admission is $12 for adults; $8 for seniors and military; $5 for students; and free for children age 12 and younger, as well as Miami Dade College students, faculty and staff. General admission is free from 4-8 p.m. Thursdays. Tickets are available for purchase online or in person at Freedom Tower.

VIRTUAL PROGRAMMING: MOAD Talks is offering live events and prerecorded presentations that unite artists, curators, critics and others to discuss the effects of art, science and technology on contemporary life. MOAD Talks are free, but advance registration is required for live events. Visit the website for the schedule and registration information.