It occupies the Miami Dade College Cuban Legacy Gallery at MDC Special Collections on the first floor of the Freedom Tower, and is organized by Wanda Texon, senior curator of the MDC Museum of Art and Design, which is also in the Freedom Tower.

Valdes has scavenged remains of what could be called the capitalism of “collectibles” to map centuries of trade between the northern and southern reaches of the globe. Her effort peels back a unique perspective on world geography and history. That perspective is rooted in the artist’s own experience and genetic research into her mother’s ancestors, who were primarily Sub-Saharan and East Asian.

As Valdes explains in a statement, she is charting “the complex terrain of multiple cultures and nations” comprising her own identity, and “how it is constantly shaped and reshaped by experiences of displacement and transculturation.”

The genius of “Terrestrial Bodies” is that it takes on this mighty task in a deceptively modest way. It dares to meld the tacky, sweet clutter of a yard sale with the contemplative spirit of conceptual art.

Entering the Cuban Legacy Gallery, you’ll notice that posted on its walls are history museum-inspired labels that say, for example, “Congolese,” “Broadly European” and “Indonesian,” to mark this as a place of cultural crossroads, a nexus between north and south. 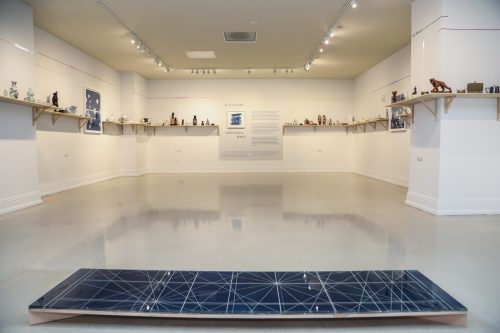 “Juana Valdes: Terrestrial Bodies” is on view at the Freedom Tower through April 26, 2020. (Photo courtesy of Liliana Mora)

There’s a shelf about 5 feet high running along three walls of the gallery. In keeping with the artist’s map-making sensibility, the shelf marks a precisely drawn line around the gallery similar to the Tropic of Capricorn demarcating a region in the Southern Hemisphere.

Stepping closer, you are directly confronted with the mock yard sale aura suffusing the exhibit. Arranged along this shelf is a curious assortment of more than 100 objects and souvenirs. They include mass-produced plates, mugs, goblets in glass and metal, as well as hand-carved wooden figures and animals. Individually, many objects seem fairly unremarkable, but arrayed in this distinctive context, they impishly and defiantly command our attention.

Why are they here? What do they mean? Whose souvenirs are they? Whose memories do they reflect? For viewers, such questions may flicker with the annoying insistence of a strobe light, while the eye travels on to yet more compelling and maddening juxtapositions of objects.

The objects are carefully, even gracefully spaced, positioned one after the other. In this placement is an aesthetic attention to scale, to the rhythm of contrasting shapes following next to repeating forms. This delicate procession of hand-held, ordinary objects on a shelf creates an unfolding visual composition, parallel to notes written across a musical composition, or images in a three-dimensional artist’s book.

A carved wooden stork gracefully points his beak upward. A white sugar bowl with gilded handles is next to a mismatched creamer with tarnishing silver trim. A wooden stool with an elephant carved in its base supports dark, wooden boxes inlaid with tiny, intricate geometric patterns of variously colored wood and possibly ivory.

There’s the preening white china figurine of a woman with a lavish Marie Antoinette-styled pompadour and gown. Not far away are two carved wooden heads with Afro-Caribbean features, one stacked on top of a cigar box labeled “La Perla Habana.” 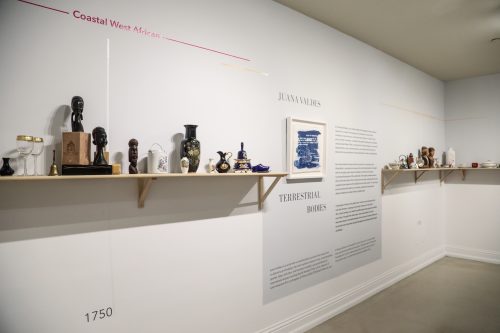 “Juana Valdes: Terrestrial Bodies” melds the clutter of a yard sale with the contemplative spirit of conceptual art. (Photo courtesy of Liliana Mora)

What’s curious about these objects is that while some are similar, none of the dishes, goblets or cups match. Each is a kind of orphan in this gathering of market-savvy souvenirs, which might or might not accurately represent the country from which they seem to originate.

Many are made from mass-produced porcelain, a material that’s fascinated Valdes since she took part in residencies in The European Ceramic Workcentre in The Netherlands in 2002 and 2013. As an indication of her long interest in the metaphoric resonance of simple, hand-held objects, she first produced a series of delicate porcelain objects resembling children’s paper boats. She then became intrigued with the role of Dutch ceramics in the history of global trade, beginning with the Dutch East India Co. in the 17th century.

Thus began her historic research into connections between routes of global trade and migration, finding links to colonialism and exploitative labor practices.

What has resulted from this research is not a scholarly text but poetic, stimulating art. An accomplished printmaker, Valdes enhances this exhibit by punctuating the display of objects with her exquisite series of cyanotype prints. They are radiant with an oceanic deep blue, evoking centuries of risky overseas travel.

Some depict a cartographer’s gridded charts, while others depict floating undersides of white pieces of china. As stand-ins for terrestrial bodies, these fragments of trade carry faint marks of their origins, too easily washed away and forgotten.

Admission (includes admission to Museum of Art and Design on second floor): $12 for adults; $8 for seniors and military; $5 for students age 13-17 and college students (with valid ID); free for MOAD members, MDC students, faculty, staff and children younger than 12