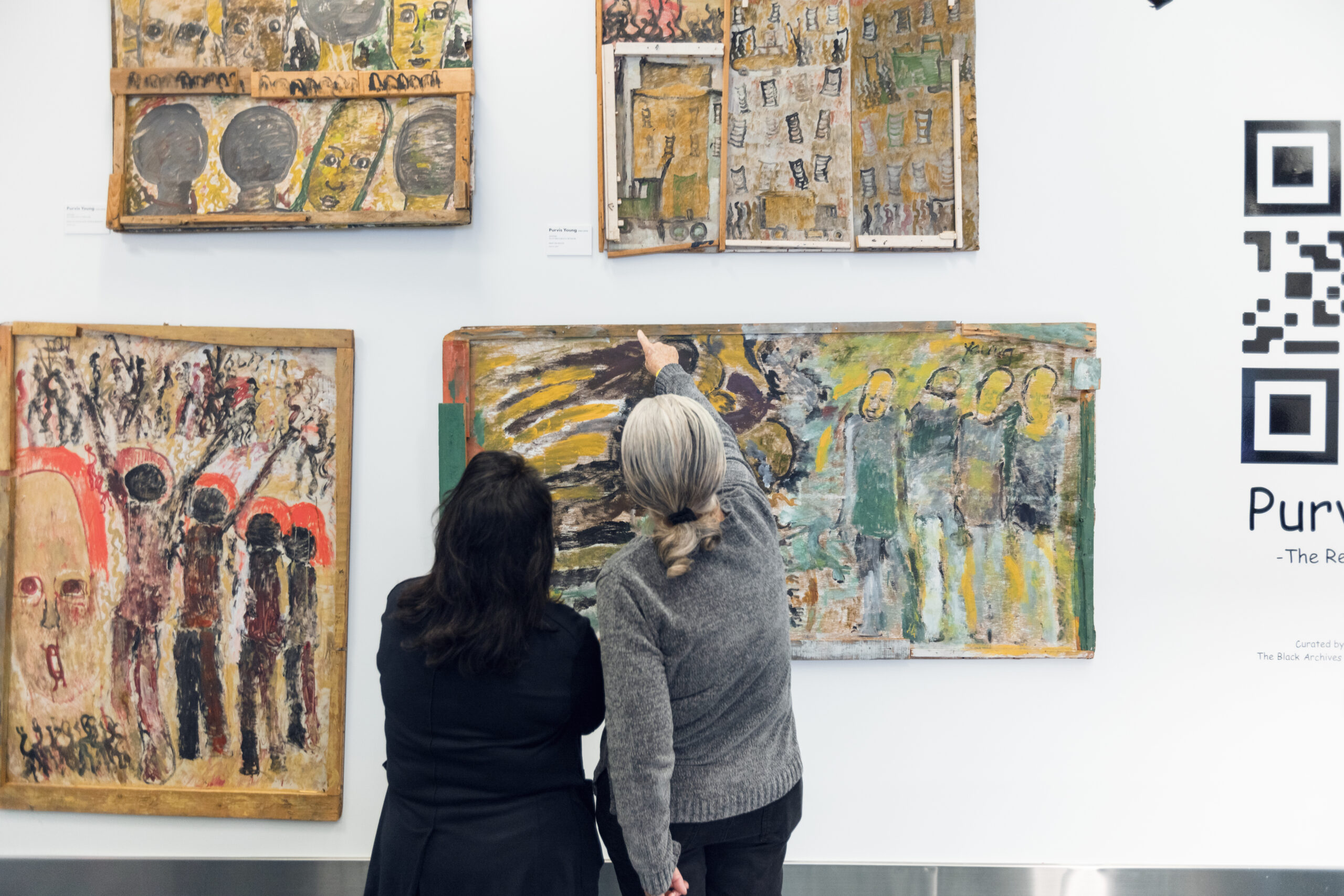 The Purvis Young exhibit is on display in the Premium Lounge at the MiamiCentral Brightline Station in Overtown. (Photo courtesy of Brightline)

Purvis Young’s artwork was a running commentary on his surroundings, a window into the concerns of his soul.

Originally from Miami’s Liberty City, the late artist was a well-known neighborhood fixture in Overtown and chronicled life there.

Now, in time for Black History Month, some of his pieces are on view in his beloved Overtown — thanks to a partnership between the Brightline intercity rail system and The Black Archives History and Research Foundation of South Florida.

The free exhibit features 19 original pieces inside the Premium Lounge of the MiamiCentral Station, 600 NW First Ave., with a QR code video showing Young describing his artwork and his creative process. Both the art and videos were supplied by The Black Archives, a nonprofit organization whose mission is to preserve materials that reflect the African-American life, experience and culture in Miami-Dade County.

“Purvis Young was a modern-day griot in terms of how he documented the Black experience through his eyes and what he saw in his environment,” said Timothy A. Barber, executive director of The Black Archives. “All of his artwork was created from what many people would consider trash that was thrown out: carpet, metals, telephone books. He took that trash and made it into a treasure through his artwork.”

Young, who died in 2010 at age 67, was a prolific, self-taught artist. His interest in art reportedly was sparked while imprisoned as a teenager, during a three-year sentence for breaking and entering. After his release, he was readily found at the library, where he spent his time devouring art books and studying greats such as Cezanne, Rembrandt, El Greco and Van Gogh.

When he wasn’t at the library, he was most likely puttering around in Good Bread Alley, so-called because, at one time, residences and bakeries were said to sell bread there. But the construction of Interstate 95 in Overtown brought a downturn to the area.

Young refused to give up hope, most days hard at work, urgently attempting to transform the alley into an artistic oasis. Through his vision, Young ultimately took the art world by storm.

“Here is a man that was considered crazy and homeless. He painted on wood, metal, whatever he could find, and hung them outside of abandoned buildings,” Barber said. “Now this is the same artwork in museums across the world.” 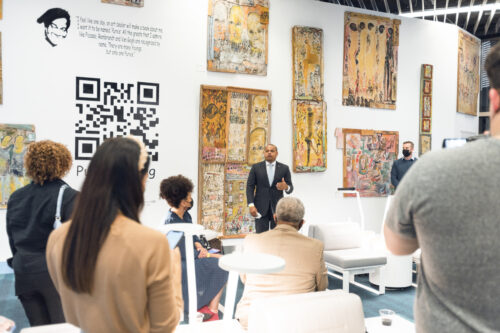 Nationally, Young’s pieces have been featured at institutions such as the Smithsonian American Art Museum in Washington, D.C., and The Metropolitan Museum of Art in New York City.

Young’s passing did little to lessen his impact. One of the reasons Young’s artwork is so important, Barber said, is because he looked beyond blight and focused on aspects that most would readily overlook.

“He drew people with a halo above their heads because he saw the good in everything that was happening in the community,” Barber said. “Showcasing his work allows for people to dream big.”

Barber hopes those who view the exhibit will be inspired to explore the artist further by visiting The Black Archives, which is headquartered within Overtown’s The Historic Lyric Theater and is home to hundreds of the artist’s works.

“We want people to know that The Black Archives is a repository for Black history from 1896 to the present. We’ve been around since 1977, and we are certainly happy that we have been given the opportunity by Brightline to showcase what the Black Archives are,” Barber said.

Brightline has also made a $5,000 donation to the organization.

“This is the first time that we have done an art exhibition in conjunction with Black History Month,” said Patrick Goddard, president of Brightline. “We are always looking for an opportunity to shine a spotlight on our communities …

“Overtown is a destination that has a lot to offer, and there’s a lot for all of us to learn.”

For those who haven’t experienced the art of Young yet, Goddard said it’s something that must be done in person.

“I’m not an art curator, but I find that Purvis Young’s artwork is the type of art that you have to see in person,” he said. “It’s so much more impactful that way.”

WHERE: Brightline MiamiCentral Station, 600 NW First Ave.; accessible to riding public as well as from outside the lounge