Six artists’ works, including the above billboard by Faylita Hicks, are featured in the Art at a Time Like This public art exhibition ‘8X5: Artists Against Mass Incarceration, Calling for Judicial Reform’ throughout Miami. (Photo courtesy of Fred Vogel)

Public art brings art to people where they are. That’s the purpose of a billboard and bus-stop billboard exhibition throughout Miami. The nonprofit Art at a Time Like This commissioned six artists for “8X5: Artists Against Mass Incarceration, Calling for Judicial Reform,” to create public artwork meant to create awareness and spark conversation about the United States’ criminal justice system. Not just awareness, however, but more a focus on the inequities of mass incarceration.

The more than two dozen billboards have been strategically placed throughout the city near courthouses and government offices, according to Anne Verhallen, the co-founder of Art at a Time Like This, who curated the exhibit with co-founder Barbara Pollack. The title of the exhibition, “8X5” refers to the size of an average prison cell.

“The billboards can have up to 350,000 viewpoints a week,” says Verhallen. “It’s important to bring politically and socially engaged works to the public and make them easily accessible. . .to influence one person’s thought, to trigger someone’s mind, to make an impact with an artwork versus an advertisement.” 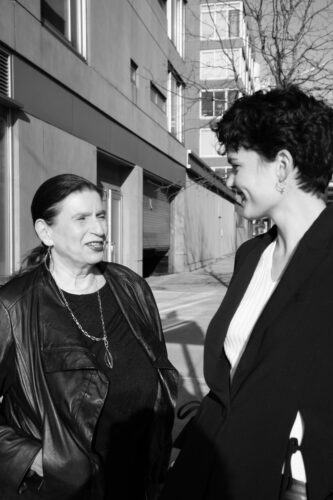 Barbara Pollack, left, and Anne Verhallen, co-founders of Art at a Time Like This, are curators of “8X5: Artists Against Mass Incarceration Calling for Judicial Reform.” (Photo courtesy of Dana Buckley)

Art galleries and museums, Verhallen explains, can be intimidating by design and, to many, not available whether it be because of economic constraints or a feeling of not belonging at a museum or inside an art gallery. “They might be intimidated in a sense that they don’t know if and how they can interact with an artwork or if they feel they aren’t an ‘expert’ on art. If you bring these works into the streets, you remove that element of access,” she says.

Art at a Time Like This partnered with SaveArtSpace, another nonprofit whose sole mission is to replace advertising spaces with public art. Both are based in New York.

The works included in “8X5” are by Guerrilla Girls, a collective of feminist activist artists, Shepard Fairey, Trenton Doyle Hancock, Sam Durant, and two artists who have themselves been incarcerated, Sherrill Roland and Faylita Hicks. There are no Miami artists included in this iteration of Art at a Time Like This. Verhallen acknowledges that is something that is missing in the Miami “8X5” project. Time constraints, she says, prevented an open call to Miami artists. Moving forward, they will include artists selected from an open call. 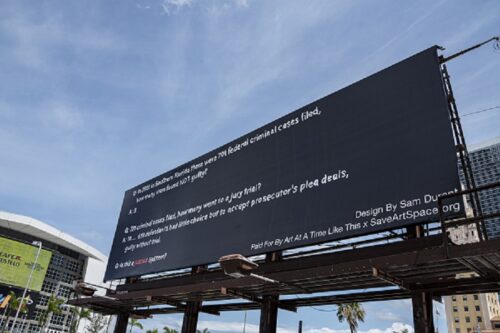 Strategically placed by the Freedom Tower and FTX Arena is the Sam Durant billboard as part of the public art exhibition ‘8X5.’ (Photo courtesy of Fred Vogel)

There are messages, however, that are Florida-centric. Guerilla Girls’ billboard cites statistics: “Floridians are sentenced to prison at a higher rate than 37 other states and every nation worldwide. Black Floridians are imprisoned at a rate 4 times higher than others. Florida prosecutes more children as felons than any other state.”  Sherill Roland’s Florida facts are displayed by poking fun at the cheeky “Did You Know?” way of presenting information.

With the project next traveling to Houston, Los Angeles, Washington, D.C., and ending in New York City, Verhallen says billboards in other cities will have some of the text-based art specific to those areas, such as the ones in Miami that accented Florida’s inequities.

The dates of the display in Miami are dictated by the contract with the billboard companies. Many of the billboards throughout the city will be on display through July 6. One, near the FTX Arena by Durant, however, will remain until July 20. Verhallen says that depending on the billboard company’s (in this case Clear Channel) schedule, some of the art may remain longer.

Guerilla Girls also addresses Spanish speakers in one of its billboards in two locations in Miami. (Photo courtesy of Fred Vogel)

Hicks, currently based in Chicago, born in California and raised in Texas, is one of the featured artists. (She identifies as a non-binary femme person and prefers a gender-neutral pronoun.) They spent 45 days in a Texas jail for a $25 check that bounced at a grocery story. It was May of 2010 when Hicks was homeless and living in their car. Because they had no permanent address, a warrant was issued and was never received, so when they failed to appear in court, they were found and arrested.

Hicks’ billboard, which, like the others appears in multiple locations throughout Miami, features a photo of a person smiling with an American Flag placed over their eyes. The text reads: “Hold these truths to be evidence, all are created equal endowed with rights, among these: life, liberty, the pursuit of happiness.” 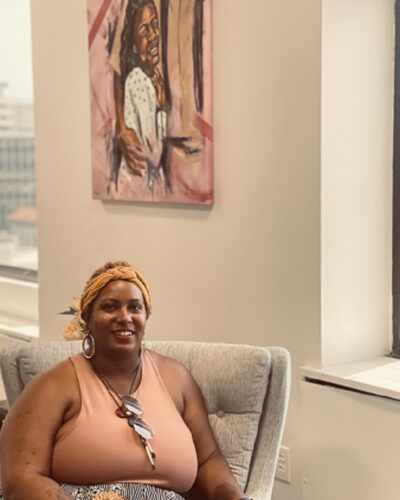 Faylita Hicks spent 45 days in a Texas jail whose billboard in the ‘8X5’ project features an ‘erasure poem.’ (Photo courtesy of the artist)

“I released an essay entitled ‘The Lineage and Language of a Liberation.’ In that essay, I mention that the conversations that impact us regular (folx) the most are not the ones being held via major television stations and political campaigns—it’s the ones being held at the bus stop or train station, the ones being had while sitting at the kitchen table or in a bar. A billboard is a conversation starter—and it’s one that desperately needs to be happening,” says Hicks.

Hicks is currently a writer in residence for the Texas After Violence Project, a nonprofit curating an oral history archive for people impacted by mass incarceration and people on death row.

“Before my arrest, I was a spoken word artist and writer whose work often focused on the rights and protections for marginalized communities both in and out of the US, including the performance pieces created to highlight human trafficking in Texas,” says Hicks. 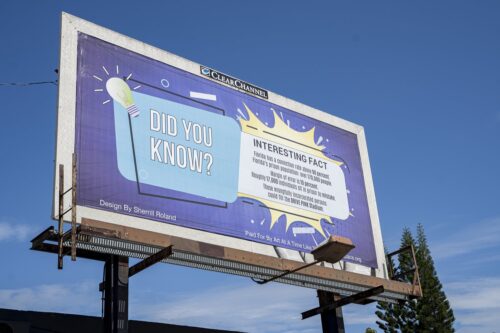 Artist Sherill Roland spent 10 months in prison for a crime he didn’t commit. His work is part of the Art at a Time Like This 8X5 billboard project in Miami. (Photo courtesy of Fred Vogel)

In the decade after their arrest, they began to integrate music, photography, digital art and film into their work. Being included in the Art at a Time Like This project is vitally important, Hicks says, especially right now.

“My billboard is the opening of an erasure poem that will reimagine the Declaration of Independence,” says Hicks. “If the U.S. Constitution, the one that has been so mercilessly abused by our Supreme Court Justice over the last several months, is based on the principles put forth by the Declaration of Independence, then it feels only natural to evaluate the quality and weight of the language used  . . . and to consider if it is perhaps time to revise or start a new draft . . . one that prioritizes the inclusion of ideals and values of the historically marginalized.”

WHAT: “8X5: Artists Against Mass Incarceration, Calling for Judicial Reform,” Art at a Time Like This and SaveArtSpace

WHERE: Throughout Miami. See Google Map of Locations

Surfside resident Oliver Sanchez called on the talents of his close networks of artists to create "CHAMPLAIN in memoriam" at Swampspace, his Design District gallery and studio space.
Continue Reading