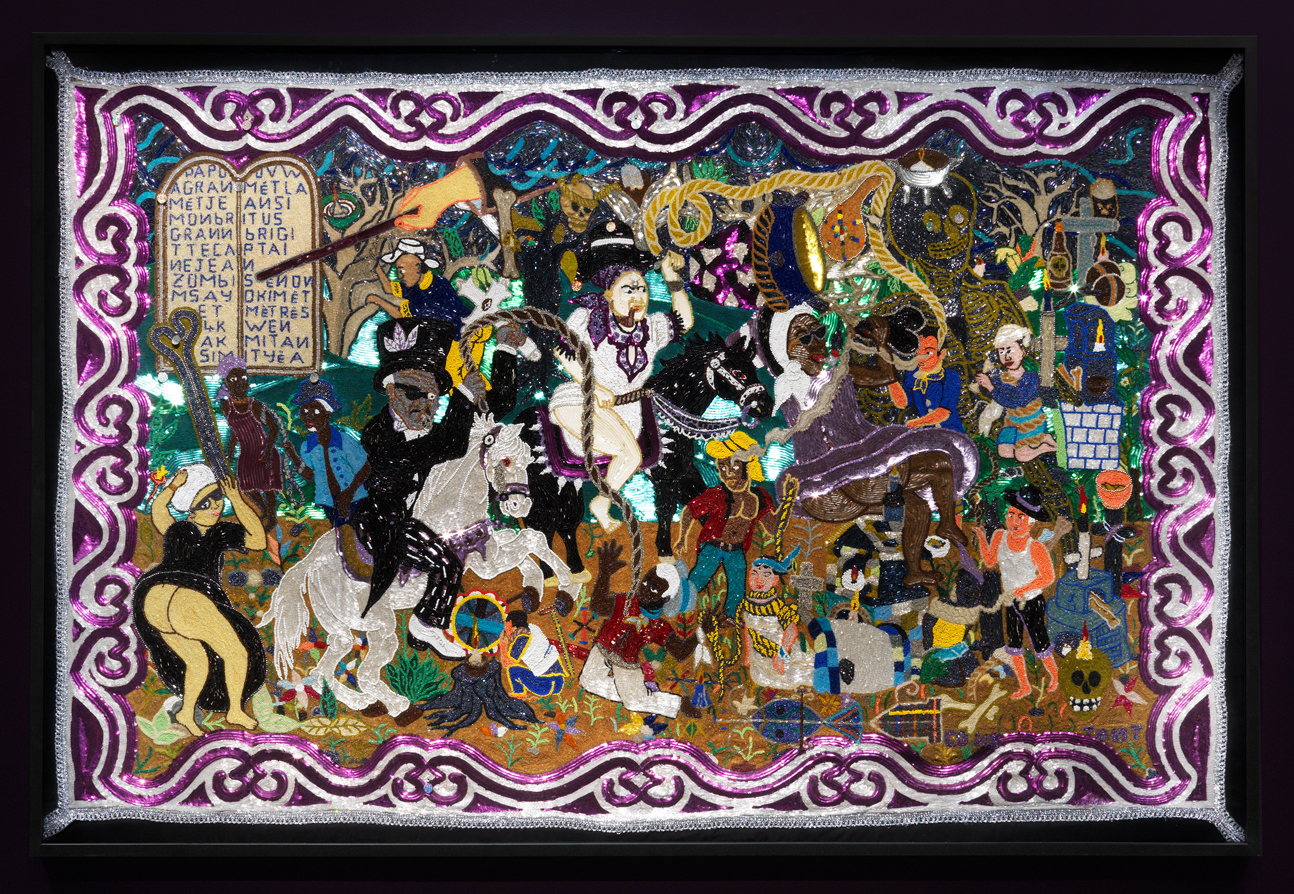 Pieced together as a mosaic of glitter and gritty refuse, “Pòtoprens: The Urban Artists of Port-au-Prince” at Museum of Contemporary Art North Miami charts a unique map of Haiti’s capital. It documents neighborhoods where artists persevere despite their country’s recent past of disaster and dysfunction.

Artists create harsh magic from recycled industrial trash scavenged on the street and limestone boulders found in a river, Rivière Froide, running from mountains to the urban coast. This magic is intensified by the extraordinary Haitian tradition of sacred Vodou arts. Its rich visual legacy is present today in many forms throughout Haiti. Entwined with the defiant history of a country tracing its birth to a 1791 slave rebellion, Vodou is a syncretic fusion of Roman Catholicism imported by French colonizers with religious traditions brought to the colony from West Africa by slaves.

With astonishing work by over 20 artists, “Pòtoprens” includes sculpture, photography, beaded textiles and a selection of films. The title is the city’s name in Creole. This art ranges from powerful and raw to delicate and exquisite, evoking complex, wrenching challenges of daily life in Port-au-Prince.

“It’s a city that has important sites of artistic production,” co-curator and Miami-based Haitian-American artist Edouard Duval-Carrié says. “These are artists recognized on an international level. Haiti is an evolving country with a lot of contradictions, a lot of problems, but still culture exists. It’s unique to Haiti.”

Before the country’s massive earthquake in 2010, Duval-Carrié recalls visiting one of those sites, La Grande Rue. He found artists making art that was “very raw, very strong,” he says. “It was representative of what was going on, like the collapse of the state and economic breakdown.”

Other sites highlighted at the museum are Bel Air, where artists create sequined Vodou flags and other objects, and Rivière Froide. Artists there make distinctive carvings from the river’s porous limestone boulders, used at one time to manufacture Roman Catholic rosaries under the guidance of a local priest. 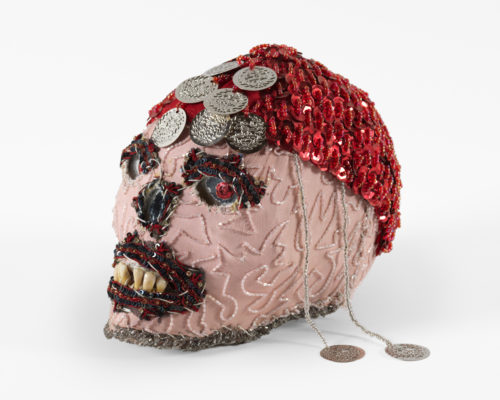 Ti Pelin carves Rivière Froide boulders. The grouping of his furrowed, expressive human heads, some with exaggerated features, creates an intense effect at the museum. As sculptures, they recall pre-Colombian art as well as centuries-old, coveted Benin bronzes from West Africa. They also highlight a prominent focus on the human head throughout the exhibit, from the lavish, sequined skulls by Dubréus Lhérisson to Michel Lafleur’s painted portraits and his installation re-creating a Port-au-Prince barbershop.

Several La Grande Rue artists are represented in the exhibit, some with art made before the 2010 earthquake, but most works in “Pòtoprens” were created afterward. Duval-Carrié calls the city’s art “post-apocalyptic.” He says, “The artists are very true to their situation. Their art reflects what is happening now. They are making art in very dire conditions. It’s an aesthetic of despair.”

Greeting visitors to the exhibit is a 2010 digital-inkjet, panoramic series of photographs, “Grand Rue after the Earthquake,” by renowned documentary photographer Maggie Steber, who has worked in Haiti for over three decades. One foot in height, it spans some 23 feet and offers an eerie, in-your-face chronicle of storefronts both decimated and apparently somewhat intact, punctuated by piles of concrete rubble and a dislocated iron gate.

In the first gallery are groupings of abstract and loosely figurative sculptures by La Grande Rue artists. Some sculptures tower over visitors. Rangy and forbidding, they include a tangled mass of car parts, mattress coils and bicycle wheels. The pieces are often melded with intricate wooden carvings, retrofitting techniques used to create tourist-friendly souvenirs in Haiti and elsewhere in the Caribbean. Sharp edges dominate, wielding a critique of failed efforts to revive Haiti’s economy.

Indicative of a determined community, artist André Eugène has played a leadership role for fellow artists in La Grande Rue and beyond. With “Pòtoprens” co-curator Leah Gordon, he founded the Ghetto Biennale in 2009. According to its website, it provides an alternative to costly biennales for artists who may not have funds to garner international attention by attending other biennials. Eugène also co-founded with artist Jean Hérard Céleur a collective for La Grande Rue artists, Atis Rezistans.

“Pòtoprens” includes Eugène’s 2009 sculpture “Gede Sekey.” “Gede” refers to a family of trickster Vodou spirits linked to ancestors, sexuality and children. This sculpture portrays the interconnectedness of death and life in a place that has witnessed devastating hardship. It’s a grotesque figure with a gaping skull for a head and a comically huge phallus. It arises from a coffin spangled with glittering CDs, a fierce riff on sequins favored by Bel Air artists.

A vertical sculpture by Céleur is composed of discarded tires, shoes and metal clustered on a seemingly haphazard wooden scaffold. Created before the 2010 earthquake, it could be a misshapen totem pole to the “aesthetic of despair,” prescient of further devastation.

Céleur’s sculpture is ornamented with clearly worn-out shoes and other discarded objects shipped from the United States to sell in Haiti. Perhaps this sculpture pays ironic, reverse homage to the glittering, ornamental style of Bel Air artists. It’s also a wry comment on the country’s bleak economy.

For years in La Grande Rue, there has been “a brisk business,” Duval-Carrié says, in selling old clothes, old toys and old electronics shipped from the United States to Haitians. Some are functional and some are not. Artists gather such battered, obsolete objects as materials for their art.

Myrlande Constant extends the Bel Air tradition of Vodou ceremonial flags with feminist imagery in her beaded and sequined textiles, larger than traditional flags. Their intricacy is exquisite, wrought with vignettes of domination and resistance, placing her among pioneering artists such as Judy Chicago, Faith Ringgold and Miriam Shapiro who elevate to fine art so-called “women’s work” in materials like textiles.

Photography by Josué Azor adds another dimension to this portrait of a city by documenting its nighttime LBGTQ community. Roberto Stephenson, a Haitian-Italian photographer now living in Haiti, documents the city’s architecture, including upper-class “Gingerbread” homes in the historic Pacot district.

Top photo: Myrlande Constant’s ceremonial flag is on view in “Pòtoprens: The Urban Artists of Port-au-Prince.” Photo courtesy of the artist and Pioneer Works.