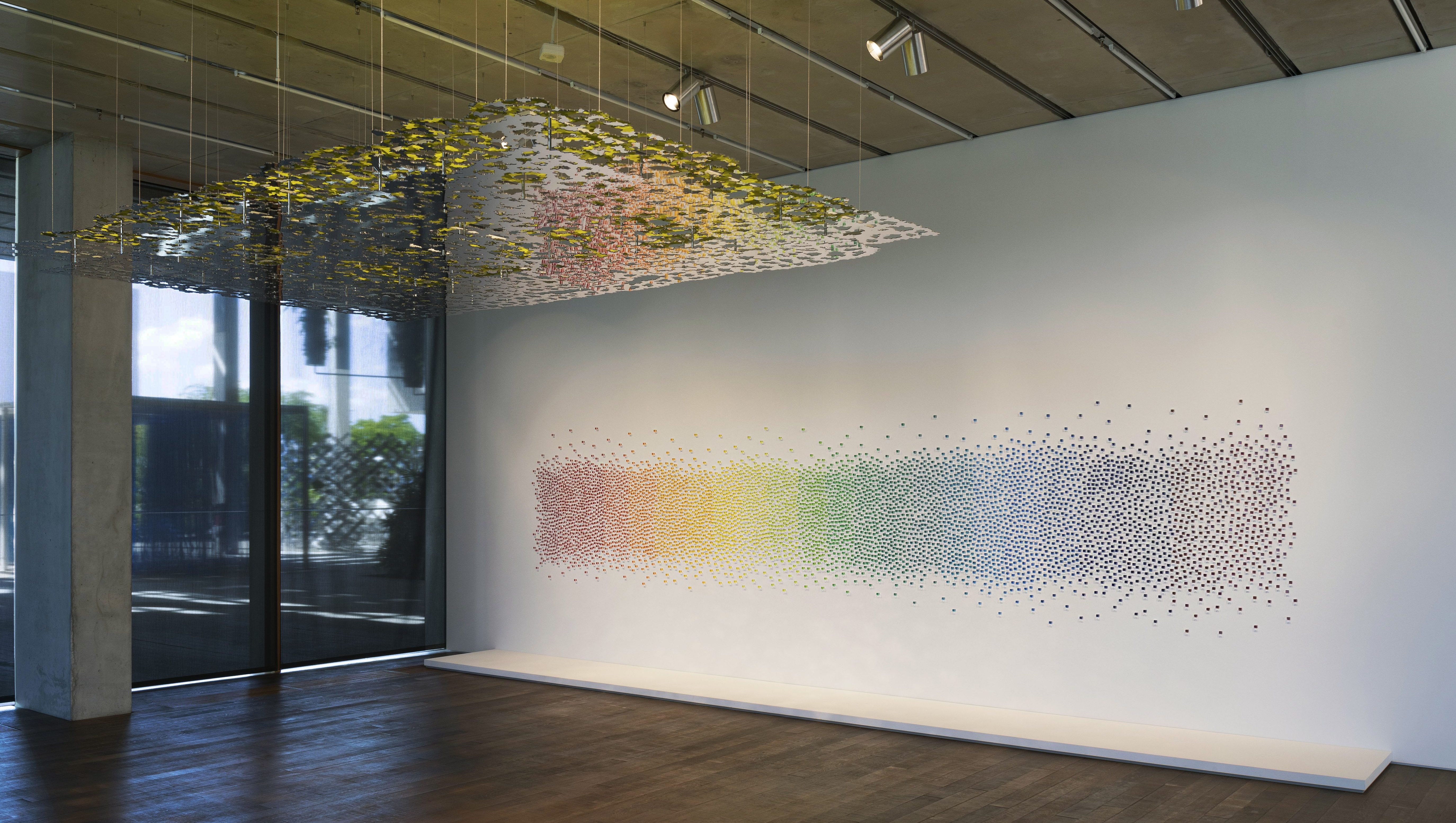 Acknowledging her ancestry, and advocating for inclusion through her appointment by President Obama to the U.S. Commission of Fine Arts, she rejects stereotyping.

“I am quietly aware of how my personal history is everywhere in the work,” she wrote in an email exchange, “but this manifests itself, like every other reference, very subtly and solemnly, and always unannounced, without being reduced to oversimplified labels or explanatory narratives. That sense of intimacy and subtlety in the work is key for me.”

Fernandez, the daughter of Cuban immigrants, was 12 years old in 1980, when Miami was rocked by the Mariel Boatlift and McDuffie race riots, while mired in anti-Cuban sentiment, exemplified by English-only initiatives. It also was – and remains – a place of seductive beauty, shifting light and shimmering vistas. As PAMM Associate Curator Maria Elena Ortiz noted, Miami influenced the young artist, “not only as a physical site, but as an intellectual and historic site.”

Her engagement with “elemental” issues of cultural identity, nature, the body and personal autonomy was bolstered by friendship with eminent artist Felix Gonzalez-Torres, whom she met in Miami. Ana Mendieta’s work also resonated deeply for her, and Fernandez’s “Viñales” specifically honors her.

Fernandez’s homecoming exhibit delivers the remarkably varied results of 20 years of experimentation, enhanced by extensive travel, research and introspection. She lives in New York and is represented by Lehmann Maupin.

“Elemental” was co-organized by PAMM and Phoenix Art Museum. Fernandez considers it as much installation as exhibition.

“From the beginning to the end of the show, I’m trying to create these experiences that contract and expand, and, as a viewer, you’re kind of led through these spaces that get smaller and tighter, or are expansive and kind of cosmic, and then they get smaller again,” she explained in a recent phone interview and virtual tour.

This journey begins in the ground-floor lobby, where the perforated, laser-cut “Untitled (Silver),” suspended from the ceiling, mirrors both the adjacent, rainbow-hued “3:37 p.m.,” fabricated from hundreds of tiny mirrored cubes, and everything else nearby. That includes a hollow cylindrical sculpture, newly sited on the plaza. Viewers thus find themselves flipped up into the overhead work and merged with the outdoors. This is characteristic of Fernandez’s subtle methodology: orienting and disorienting, solid and ephemeral. Without literally depicting people, the reflective surfaces seen throughout the exhibition bring the viewer into the work.

Upstairs, visitors enter a gallery abounding with mirrored, matte and satin forms that beckon from overhead, from the floor and walls. Navigating this large space, anchored by five somber rectangular graphite panels, visitors encounter “Sfumato,” whose smoky veils float across three walls. Created by painstakingly affixing hundreds of small, irregular chunks of graphite to the walls, each shadowed by a fuzzy vertical line, this piece achieves great scale from small units and toggles between apprehension as object and natural phenomenon – like drifting fog. 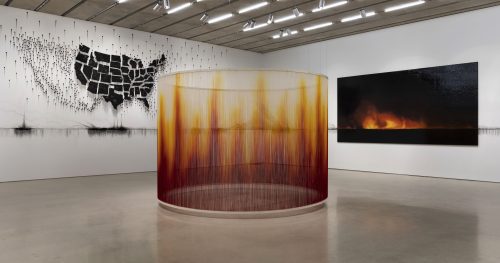 The exhibition’s newest and most overtly political gallery is titled “Fire.”(Photo courtesy of Oriol Tarridas)

“Stacked landscape” is a phrase she uses to signify the numerous references a “place” may carry: above and below ground, ancient and contemporary, local and distant, real and imagined.

Fernandez wrote, “What I’m after is a lingering ephemeral engagement, slow, quiet and with enough depth, kinesthetically, to be recalled by the viewers after the work is no longer in front of them.”

Whether fashioning works in her studio, or leading collaborating teams, the artist experiments continuously.

“I’m often working with people who have never done what I’m asking them to do, even though they may be experts in their field,” she said.

“I already knew that she was very hard-working and meticulous,” said Ortiz, about Fernandez’s practice. But witnessing the intense labor involved in the installation, she said, “It’s almost like she’s literally giving herself to us, the audience.”

Viewers move from the “daytime” gallery into a suite of drawings, prints and small, exquisitely carved graphite panels, suggestive of waterfalls and seascapes. A “nocturnal” gallery next appears, dominated by three “Night Writing” panels, based on the aurora borealis, but incorporating clusters of tiny mirrors. Intriguingly, they read as constellations and Braille characters – and reflect viewers.

“They’re so much about putting you inside the work,” said PAMM Director Franklin Sirmans about this recurrent strategy.

Fernandez has lived in Japan and worked collaboratively with studios there. “As Above So Below,” from her “Golden” series, suggests a conversation between Western and Asian landscape traditions. A large panel – coated with gold chrome, then delicately washed with India ink by the artist – radiates warmth and majesty. Devoid of figures, it subtly reflects images of passing viewers.

Fernandez’s extensive use of gold entwines its elemental visual seduction, mystical associations, and historical connection to invasion and exploitation. “As Above” hangs among kindred wall-mounted works, a gold-toned sculpture, titled “Rorschach;” and an exquisite, double-sided, translucent woven screen, “Nishijin Sky,” that creates a complex, shadowy veil across the space.

Proceeding further, a side gallery presents three darkly shimmering, mosaic-like, glazed ceramic wall panels, surrounding a sculpture, “Viñales (Reclining Nude),” that’s fashioned of green Congolese malachite rocks, arranged on charcoal-toned polyhedrons. The malachite’s complex miniature topography served as source imagery for the painterly panels and expressly pays homage to enslaved Congolese miners, whose forced migration brought them to 19th-century Cuba, where some found refuge in the Viñales Valley’s caves. Fernandez referred to this niche as the “subterranean” segment of her installation, and it again embodies her notion of “stacking”: a location laden with social history, geology and memory. 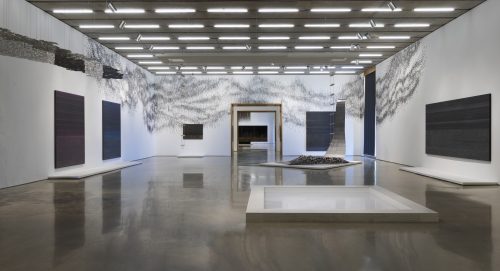 Viewers next enter the exhibition’s newest and most overtly political gallery: “Fire.” At the center stands a 12-foot diameter translucent cylinder, fashioned from vertical strands of silk yarn, bearing flame-like motifs. This striking feature – along with the viewer – is surrounded by multiple wall-mounted elements, made of charcoal – literally, burnt wood. They consist of an encircling horizon line, interrupted by ominous, smoky charcoal “islands” and by two monumental, glazed ceramic panels, representing nighttime infernos.

Additionally, a charred relief map of the United States dominates one wall. With acute timeliness, it’s flanked by a ghostly image of Mexico. Each state is isolated from its neighbors; the whole is shadowed with charcoal. Fernandez, who spent days in the gallery, designing and drawing, doesn’t simply reference wildfires in the western United States. She also invokes the raging hostility that ravages the nation. And that roiling social discord has a long history.

“These are not new things,” she said. “We can look at 1840, and it’s the same things that have always been happening.”

She continued, “It’s toggling between this very specific thing that offers the viewer an understanding rooted in the present and then toggles back to being elemental fire. And there’s marks on the wall that start to turn into these meteors, or stars, and so it’s at once all of these scales and all of these tenses happening at once.”

Several years in planning, the exhibition, accompanied by a sumptuous catalog, will thoroughly reward the season’s surge of arts enthusiasts, but also intrigue children with its myriad optical effects. As Sirmans summarized, “It’s nuanced and complex in its meaning, but physically it offers a really fun experience.”