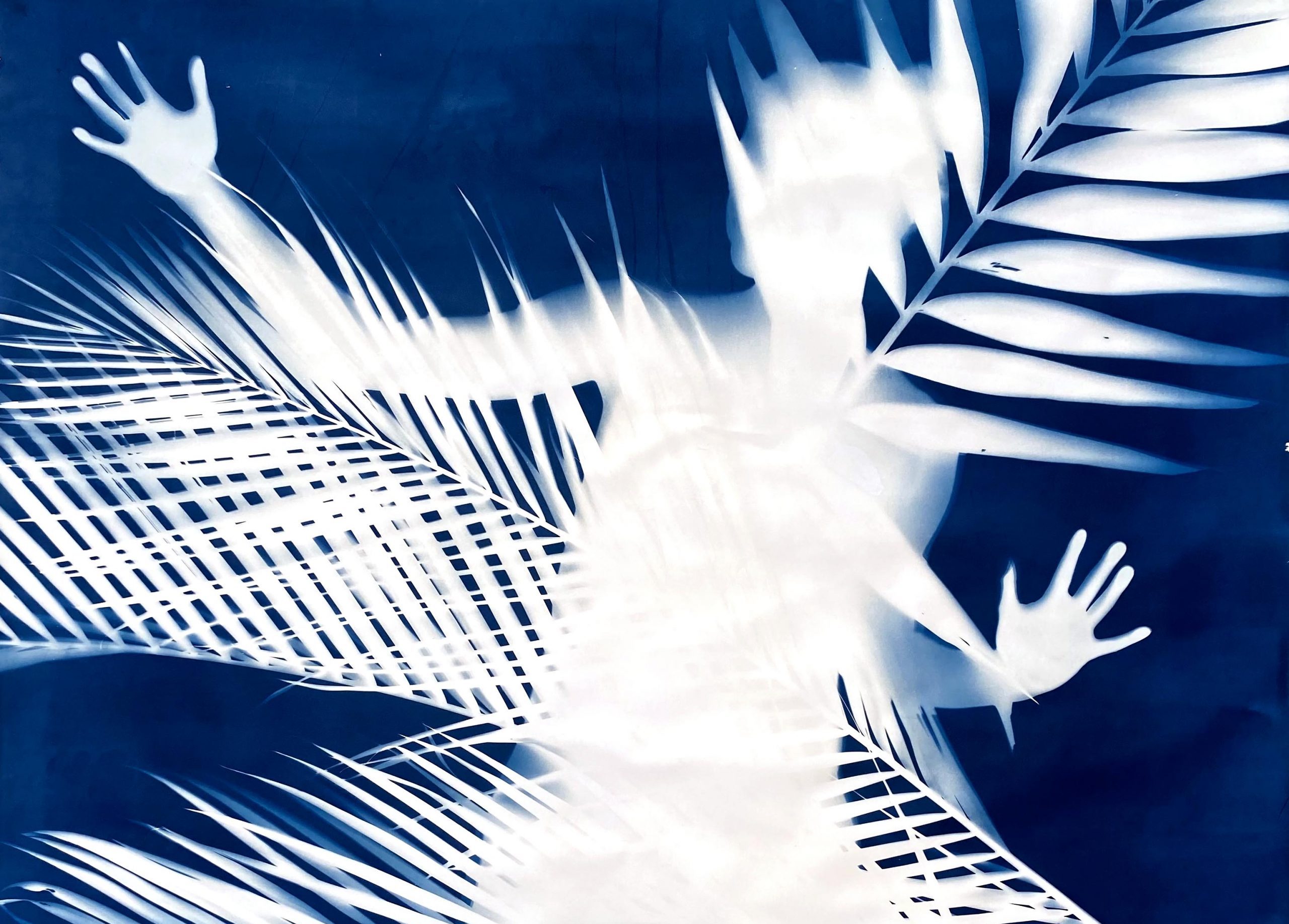 If it seems like it’s too good to be true, it usually is.

When internet reports emerged of dolphins creeping back into Venetian canals, as a result of human inactivity during quarantine, the tale put a smile on faces everywhere.

“I thought it was one of the more uplifting stories during the pandemic, with everything else being so apocalyptic,” photographer Anastasia Samoylova said.

But, of course, it wasn’t true. Samoylova’s “Dolphins In Venice,” a vibrant photo collage with a striking color scheme, boldly captures the quirkiness of the event.

“It is exaggeratingly theatrical. It’s like a kaleidoscope, and there’s definitely an element of humor,” Samoylova said. “It is also a visual metaphor. Always seek out truth and dig deeper. Always look beyond the facade of an image.

“Art is not just aesthetics,” she continued. “It’s about thought. Nothing is just black and white.” 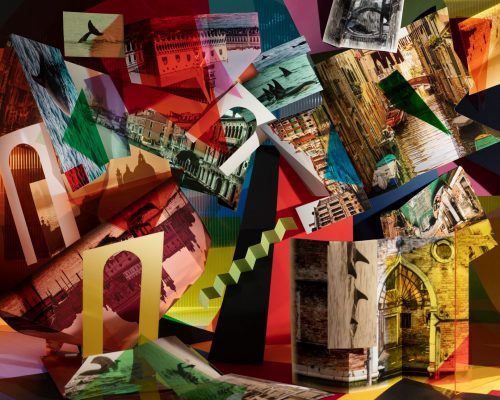 Samoylova’s piece is one of several featured in the lens-based exhibit, “Natural Transcendence,” presented by Oolite Arts in Miami Beach through Nov. 7. The exhibit has been extended past its original end date of Aug. 22.

“‘Natural Transcendence’ is our first exhibit in over a year that is open to the public,” said Dennis Scholl, president and CEO of Oolite Arts. “Given how it poignantly ties to our experiences during the pandemic, we are hopeful that the community is able to embrace and be inspired by these seven artists who, through their unique vision, allow us to connect to our deeper sensibilities with nature.”

Filmmaker and video artist Rhonda Mitrani, who curated the exhibition, said she focused on finding artists whose work is heavily based on the environment.

“For me, it’s important to raise socially conscious issues,” she said. “I knew they all worked in nature. Each artist brought their own personality.”

There were several who immediately came to mind, such as artist and educator Wendy Wischer. Her  “Where Water and Rock Collide” stimulates the senses while providing a meditative and immersive experience. 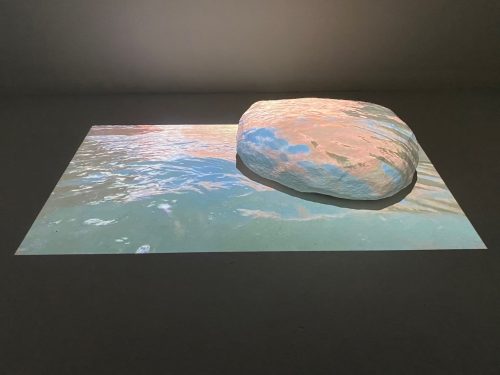 Wendy Wischer’s “Where Water and Rock Collide.” (Photo courtesy of the artist)

“I tried to give it the feeling that you are on water,” Wischer said. “Most of the footage came from the Grand Canyon. The piece is about any river, but at the same time, it is the Colorado River. I made it ambiguous enough so that people can insert themselves.”

The symbolism of the piece is clear.

Megan McLarney’s “Blue Cascade” is another water-based piece. Mitrani approached McLarney because of her uncanny ability to focus on what others may overlook. 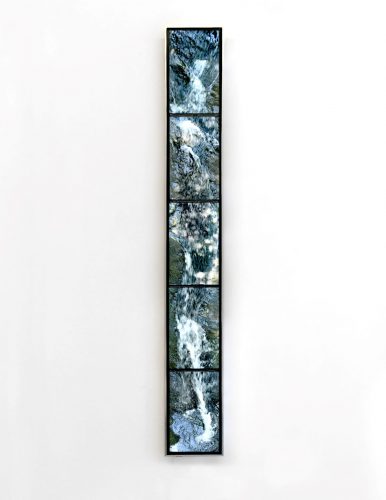 “[She] takes an ordinary moment in nature and makes it extraordinary,” said Mitrani.

The five-panel vertical video display features a continuous cascading waterfall. The piece, which was captured near a meditation center, is deliberately devoid of sound.

“Sounds can be very aggressive. White sounds are less [so], but I want you to have your own sound,” McLarney said. “Art is kind of like therapy. You take away what you need and explore what you need to explore. But what I would hope is that there’s a moment of peace and solitude that you look for in nature.”

McLarney also views the piece as a celebration of the minutiae in honing her craft: “Here’s this water moving and, as it moves, it creates these grooves. It cuts into rock and you see the movement over time, but it also shifts. I feel like that’s kind of like the shooting process that I do. [I shoot] again and again and again.” 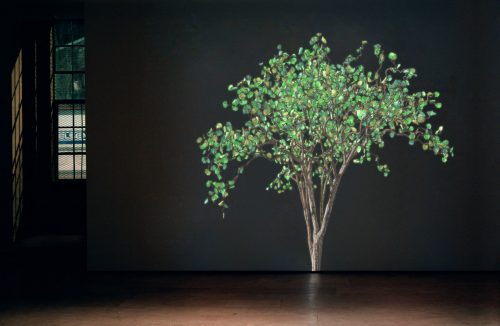 The enthralling video projection, which draws heavily on whirling Islamic dance, is what inspired Mitrani to showcase her work.

“The physical movement of the trees echo human movement,” said Mitrani. “You can’t dance without using your soul.”

Steinkamp said “Dervish 2” evolved out of “Eye Catching,” a piece she did in 2003 that explored Medusa heads in the Yerebatan Cistern.

“I researched Medusa and decided to make this enchanted area for her with trees that move like the snakes in her hair,” she said. “If a man looks her in the eye, he turns to stone. You can interpret that with a sexual innuendo if you want. I think it’s funnier that way.”

After viewing a dervish performance, she was inspired to make trees that whirled just like the dancers.

“This piece, in very quick time, goes through all the seasons in a year,” Steinkamp said. “I guess it never dies. Although winter is sort of a death, but then there is a rebirth once again.” 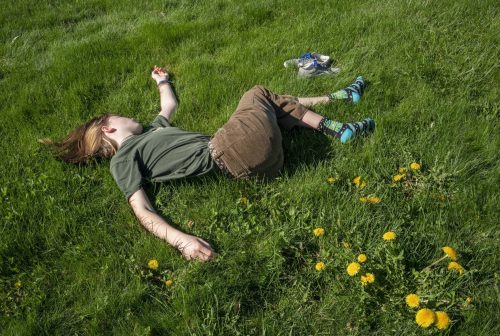 Colleen Plumb’s “Elsa in the Grass with Dandelions.” (Photo courtesy of the artist)

After a rebirth, there is often resilience. And who better to teach us about adversity than children?

“Elsa in the Grass with Dandelions” shows us the importance of taking time to kick back, relax and take our shoes off even, if (and especially when) we are dealing with challenges.

“[This piece] indirectly speaks to the experience of kids during the pandemic,” said Colleen Plumb, whose daughters have often been the subject of her photography.

Children are often keen observers in environments that adults may take for granted.

“I think the whole show is a lot about paying attention,” Plumb said. “It addresses the exquisite balance of life on earth. When I’m around trees, water or animals, I have a chance to be reminded of their interconnectedness, especially now, after we’ve all been forced to slow down.”

Plumb captured the piece during an outing with her daughter. “I didn’t direct her to be in that position,” she noted. “But I think that’s symbolic of what we all need, to just lie down in the grass. Maybe we don’t do that enough as adults.”

For Antonia Wright, creating “Touch Has a Memory,” a cyanotype photogram, was one way of keeping herself grounded.

“When the quarantine began, everything was so separated and removed from each other, so making these prints, where I’m actually laying on the page, was a way to have a connection during a time that was so devoid of touch,” Wright said.

The process involves several steps: “I go out into the sun, really quickly, and I lay the paper down. I place plants on the page and then I lay my body on top of the plants. Then I stay there for 8 minutes and that’s the exposure. So, normally photographs, a lot of them, you can make them in the darkroom. But this one uses the sun as the light source, and then it’s a photograph but it’s a non-negative photograph…”

Mitrani views the large-scale vinyls as “a unique and wonderful addition to the show.  She is literally physically embedding herself in nature.” 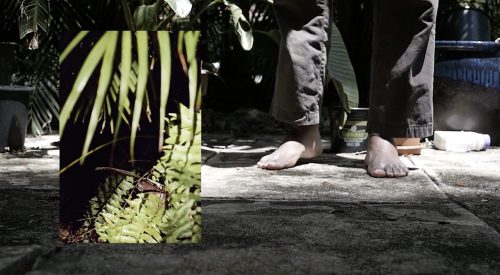 Adler Guerrier’s “Untitled (Hello! How am I spending my time_!). (Photo courtesy of the artist)

Adler Guerrier also uses plants as a vehicle to convey his thoughts.

In “Untitled (The croton brightens and dignifies; here we will be.),” he offers a contemplative and unique perspective right from the vantage point of his own personal space.

“It’s an image that illustrates a moment where I have found within the corner of my yard how a croton and a palm frond at a particular moment in time, and at a particular moment in the day, catches light, and bounces back,” he said. “It becomes a central object that shapes and dominates my physical space, and me spending time next to that, it does what the title suggests, it brightens my day. And it continues to add to the dignity in my life.”

He noted how we often incorporate the environment in our daily lives.

“Even though we don’t always live in nature, nature lives in our homes,” he said. “We replicate nature and natural settings, sometimes as large as a garden, or as small as a potted plant on one’s windows. But this desire to replicate the natural world, we do it because we’re trying to connect.”

“The way that nature and humans connect is beyond scientific analysis,” she said. “We are recalibrating our relationship with nature.”