New PAMM exhibition to pull back the curtain on Miccosukee symbols, stories 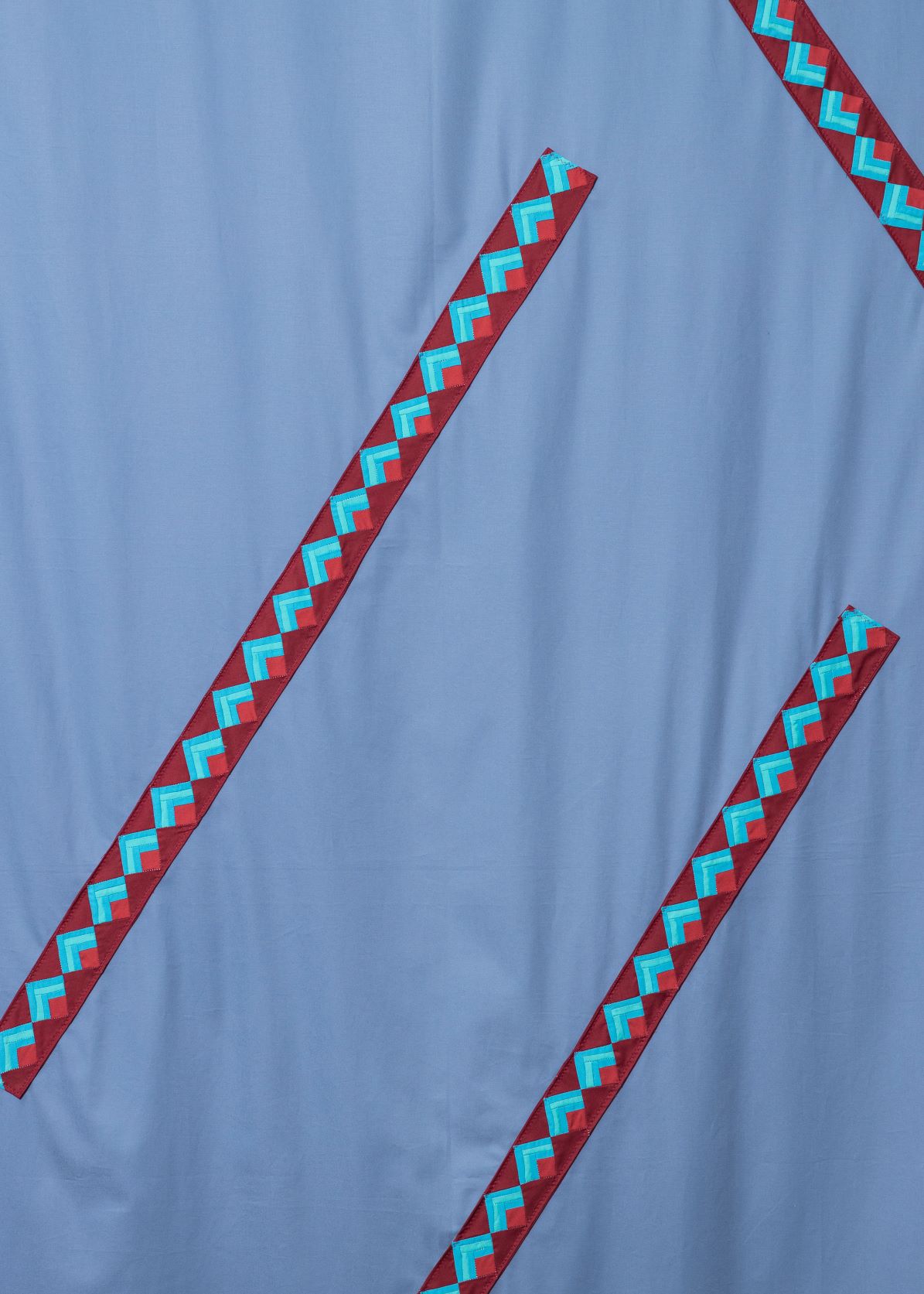 Miccosukee tribal member Khadijah Cypress learned patchwork by watching her grandmother weave strips of contrasting colored fabrics by hand. The bands of the intricate patterns were then sewn into clothing – horizontal stripes layered into rows, which created a skirt, dress or shirt.

These patterns are now at the heart of an exhibition opening May 20 at Pérez Art Museum Miami.

With “The Swaying Motion on the Bank of the River Falls,” Chilean artist Felipe Mujica has woven Cypress’ Miccosukee patchwork and symbols of South Florida into large, abstract-design fabric panels. Together, they are telling a collaborative story.

“The patchwork themselves are abstract and that’s something I wanted to incorporate in the work,” Mujica says. “To see that applied to a much larger scale and in dialogue with architecture and in relation to space, there is an expansion of their knowledge into another field. And for me, it is vice versa. My work expands and incorporates their knowledge.”

This site-specific commission at PAMM – Mujica’s first large exhibition in a museum – will feature more than 20 panels, measuring about 6X4.75 feet each.

“Sometimes people will refer to them as flags or banners, but I call them curtains,” Mujica says. “There’s a connotation or a symbolism that shifts the conversation with that reference.” 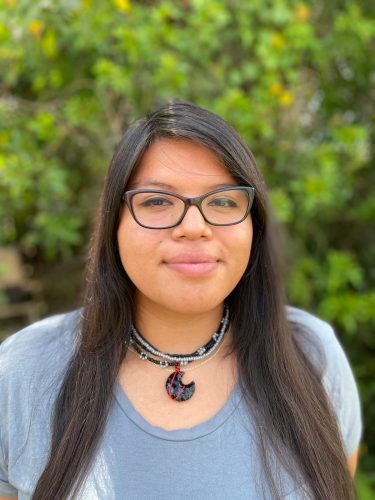 Miccosukee tribal member and patchwork artist Khadijah Cypress opened a community center on the reservation, which is in the heart of the Everglades in Miami-Dade County, to teach the tradition of patchwork. (Photo courtesy of Courtney Cypress)

Perhaps he is helping to pull back the curtain, so to speak, on these traditional handicrafts that hold so much history and tradition, knowledge and culture – all transferred through the artisans’ hands in the work.

“Most of the abstractions are something from nature – the elements or animals,” he says.

Mujica typically starts out with a design on a sketchbook, then the works evolve with the patchwork creators.

“He had designs, yes,” says Cypress. “I told him, ‘I’m just going to make whatever patchwork I can think of and we can figure it out later.’

“When we got together, I was looking at the designs he made and some of them reflected the patchwork, and that’s how we were able to put it together.”

While Mujica chooses the background textiles – mostly all of them, except for a few that will appear in outdoor spaces, are made of 100 percent organic cotton – in this case, Cypress selected which patchworks to produce and their color combinations. How the patchwork relates to the background and to the drawing Mujica creates from the outset is what he says creates the dialogue of the pieces.

“Each curtain’s title will have the name of its patchwork: Big Storm, Fire, Snake Skin, Steps, Worm, Turtle, Frog, Bird, Diamond, Man on Horse, Pyramid, Lightning,” he says. “And with most of the color combinations decided by [Cypress], this brings into the project both her personal and cultural self.”

Also, how the curtains interact in the space and with the visitor is meant to evoke interpretation.

“He’s interested in how the viewer experiences the work physically as well as visually,” says PAMM associate curator Jennifer Ignacio.

Some of the curtains will be hung by a single string. “Imagine a flat panel hung that way,” Ignacio says. “It is going to move around and rotate as the air flows. It is not going to be static.”

Others will be hung by two strings. “That is when the artist is making the decision of exactly where he wants them – that maybe those, he doesn’t want to move around,” she adds. 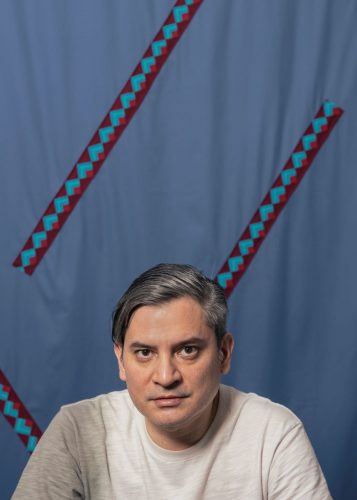 A third set will be hung by wire on a cable. “This is a way more direct way to interact. Viewers are meant to move them across the room,” she says.

In all three cases, the installation will be in constant movement, “whether that is created by the viewer or as a result of the space itself,” she says.

Ignacio first noticed Mujica’s work at the 2016 São Paulo Biennial in Brazil and says she knew in an instant that he was someone PAMM wanted to bring to Miami. At the root of his practice is the collective, where he works with traditional artisans and introduces the forms onto a different medium.

What she saw at the biennial was the partnership he had created with Brazilian designers and a local community of embroiderers from outside of São Paulo. He also previously partnered with Wixárika tribal artisans from Zacatecas, Mexico, incorporating their traditional beading method into his panels.

“We wanted to have him here and to show his work, but also in a way that invited him to look at Miami and connect with a community here,” Ignacio says.

“It was so out of the box,” Cypress says, about the idea of her patchwork merging with Mujica’s textiles.

To think of them being incorporated in a museum work of art was astounding to her, she says.

“If you were to tell me I could come up with something like that, I wouldn’t think I would know how to do it,” Cypress says. “I’ve always made patchwork for skirts and traditional things,” she says.

Cypress started a community center on the Miccosukee reservation, where she lives in the Everglades. It is there that she teaches others about patchwork and fosters the traditional craftwork of the tribe.

“It ended up being a marriage between the two interests, but coming from different angles,” Ignacio says. “[Cypress] is already building collaboration and building community within her own community and that is what Felipe’s work is about – he builds bridges working with these communities.”

The exhibition is also meant to serve as a platform for environmental and cultural issues of importance to the Miccosukee Tribe. The museum is planning educational and historical talks to bring attention to these topics, and Cypress welcomes the exposure.

“When we speak out, it feels like we’re just talking into a void,” she says. “I know some people are into art and hopefully it expands their world.”

WHAT: “Felipe Mujica: The Swaying Motion on the Bank of the River Falls”

COST: Visitors must reserve tickets at this time due to COVID-19 protocols. Tickets are $16 for general admission and $12 for seniors age 62 and older, students and children age 7-18. Admission is free for children age 6 and younger and first responders and health-care professionals.