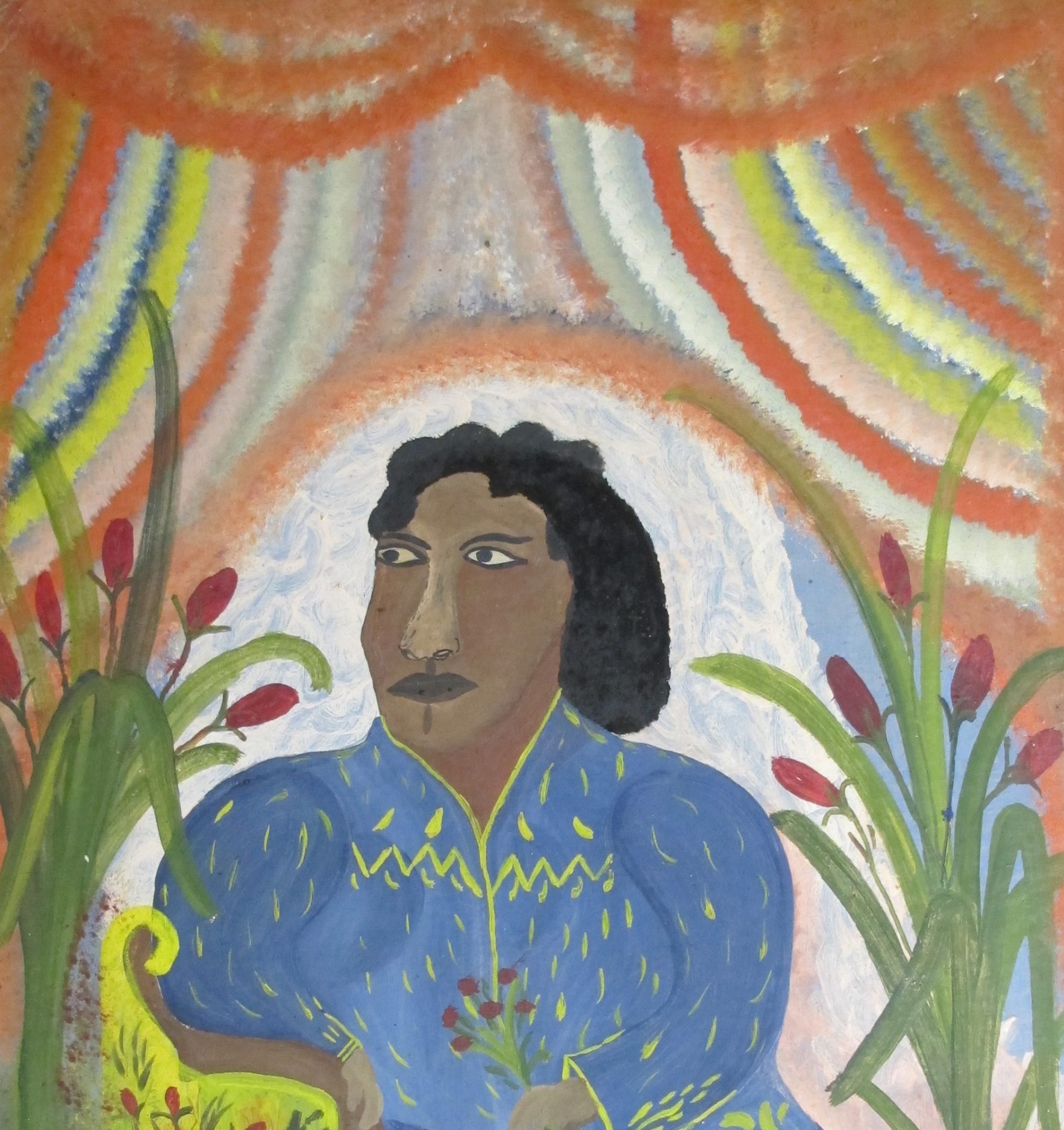 Hector Hyppolite’s “Une jeune dame” features mixed media on wood. The artist drew international attention in 1947 when his work was featured in a UNESCO exhibit in Paris. (Photo courtesy of the Betty and Isaac Rudman Trust Collection)

The works in “Life and Spirituality in Haitian Art: Selection from the Betty and Isaac Rudman Trust Collection” — on display at the Museum of Contemporary Art in North Miami — offer a stylized portrait of Haiti, primarily in the 1940s and 1950s, by artists working with simple materials and exceptional vision. They depict the hardscrabble Caribbean nation with grace and pride.

However, paintings such as these were once labeled “naive,” says exhibit curator Francine Birbragher. “This was a negative connotation,” she adds, arising from the artists’ lack of formal training and materials.

Yes, the paintings often have the “flat” look common to artists unused to portraying their subjects with three-dimensional perspective. Although some paintings are by artists more skilled than others at depicting subjects realistically, she says, “In general, these artists are all self-taught. They did not have acrylics or oils. They used house paint. They were very resourceful.”

MOCA’s “Life and Spirituality in Haitian Art” features master works that have rarely, if ever, been exhibited, according to the museum’s executive director, Chana Budgazad Sheldon.

“The artists in this exhibition, such as Hector Hyppolite, are considered masters of the Haitian art movement, or the Haitian Renaissance, in the 1940s,” she says.

Immediately the exhibit takes viewers to a seminal moment. It begins with paintings by the legendary Hyppolite, one of the first artists championed by the pivotal Le Centre d’Art in Port-au-Prince.

Founded in 1944 by American watercolorist DeWitt Peters, Le Centre has provided support for artists while promoting their work. It was there, in 1945, that Hyppolite’s paintings caught the eye of a celebrated visitor, French Surrealist poet Andre Breton, who was said to admire them for the absence of European techniques and styles.

Initially, Hyppolite worked with brushes made of chicken feathers and the enamel paint he’d used for painting doors and furniture to earn a living. Later, he acquired conventional brushes from Le Centre.

Prestigious recognition followed the artist’s encounter with the poet. Breton included Hyppolite in a widely read essay on Surrealism, and the artist drew international attention in 1947 when his work was featured in a UNESCO exhibit in Paris.

Today, his 1946 painting, “The Congo Queen,” hangs in The Museum of Modern Art in New York. It reflects influences of Roman Catholicism from French colonizers in Haiti and the country’s Vodou religion.

The son and grandson of Vodou priests, Hyppolite was a self-taught artist and, by many accounts, a Vodou priest. He had not formally studied European art but was well-versed in the sacred arts of Haitian Vodou, interlacing iconic scenes of spirits with flora and fauna.

These artists range from Hyppolite to contemporary figures such as Edouard Duval-Carrié and those included in a dazzling, challenging exhibit co-curated by Duval-Carrié in 2019 at the museum, “PÒTOPRENS: The Urban Artists of Port-au-Prince.”

With “Life and Spirituality in Haitian Art,” MOCA provides a “historical context for contemporary Haitian artwork,” like that exhibited in “PÒTOPRENS,” Sheldon says. Overall, the tone of that exhibit and its art from ingeniously recycled materials, reflecting the country’s extreme hardship, was more blunt and grim.

Only a few paintings in the current exhibit fall into the cliches of portraying an impossibly idyllic paradise, such as the candy-colored village painted by Roland Palanquet. 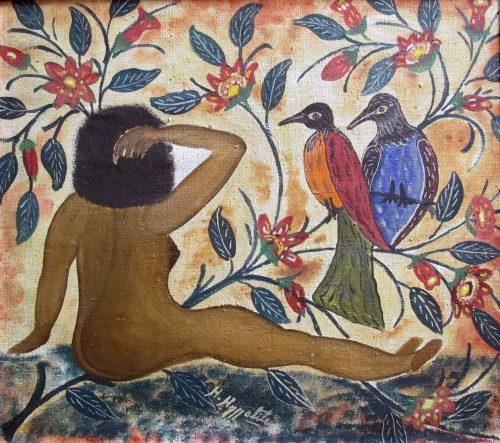 Works by Hyppolite include a female nude posed among rhythmic, nearly abstract patterns of flowers and leaves. Two tropical birds gaze at the woman, whose face we cannot see, enhancing her mystery.

The painting, “Femme nue avec oiseaux,” is disarming for its “flatness” or lack of three-dimensional perspective, signifying the artist’s self-taught status. Its dreamy, vivid allure is undeniable. The woman’s body seems to float above small green mountains, overpowering them with heavenly, voluptuous beauty.

The 1946 “Toilette Paysanne” by Louverture Poisson shows a woman in a modest country home arranging her hair before a mirror propped on a log. Realistic details, from pots for collecting water to her reflection, capture a private, personal experience. 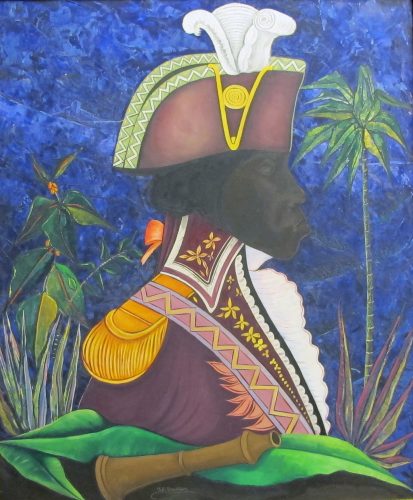 Jacques-Enguerrand Gourgue’s untitled portrait of Toussaint Louverture, oil on board. (Photo courtesy of the Betty and Isaac Rudman Trust Collection)

All these historic paintings offer a sudden, disorienting contrast to the contemporary “Raúl de Nieves: Eternal Return and the Obsidian Heart” in the first gallery at MOCA. To enter and depart “Life and Spirituality in Haitian Art,” visitors must walk through the carnivalesque “Raúl de Nieves” exhibit.

In our screen-dominated days, when it’s easy to shift from one point in time to another on our devices, moving between MOCA exhibits is somewhat akin to switching from Eric Satie’s piano music in early 20th century Paris to Mardi Gras fanfare in New Orleans.

Be prepared to welcome this instantaneous passage between past and present.

WHAT: “Life and Spirituality in Haitian Art: Selection from the Betty and Isaac Rudman Trust Collection”

WHEN: Through March 14. Public hours of exhibition are noon-7 p.m. Wednesdays and 10 a.m-5 p.m. Thursdays-Sundays.

COST: $10 for general admission; $3 for students and seniors; and free for children younger than 12, MOCA members, North Miami residents, city employees and veterans.