MOCA extends monumental ‘My Name is Maryan,’ then it goes to Tel Aviv 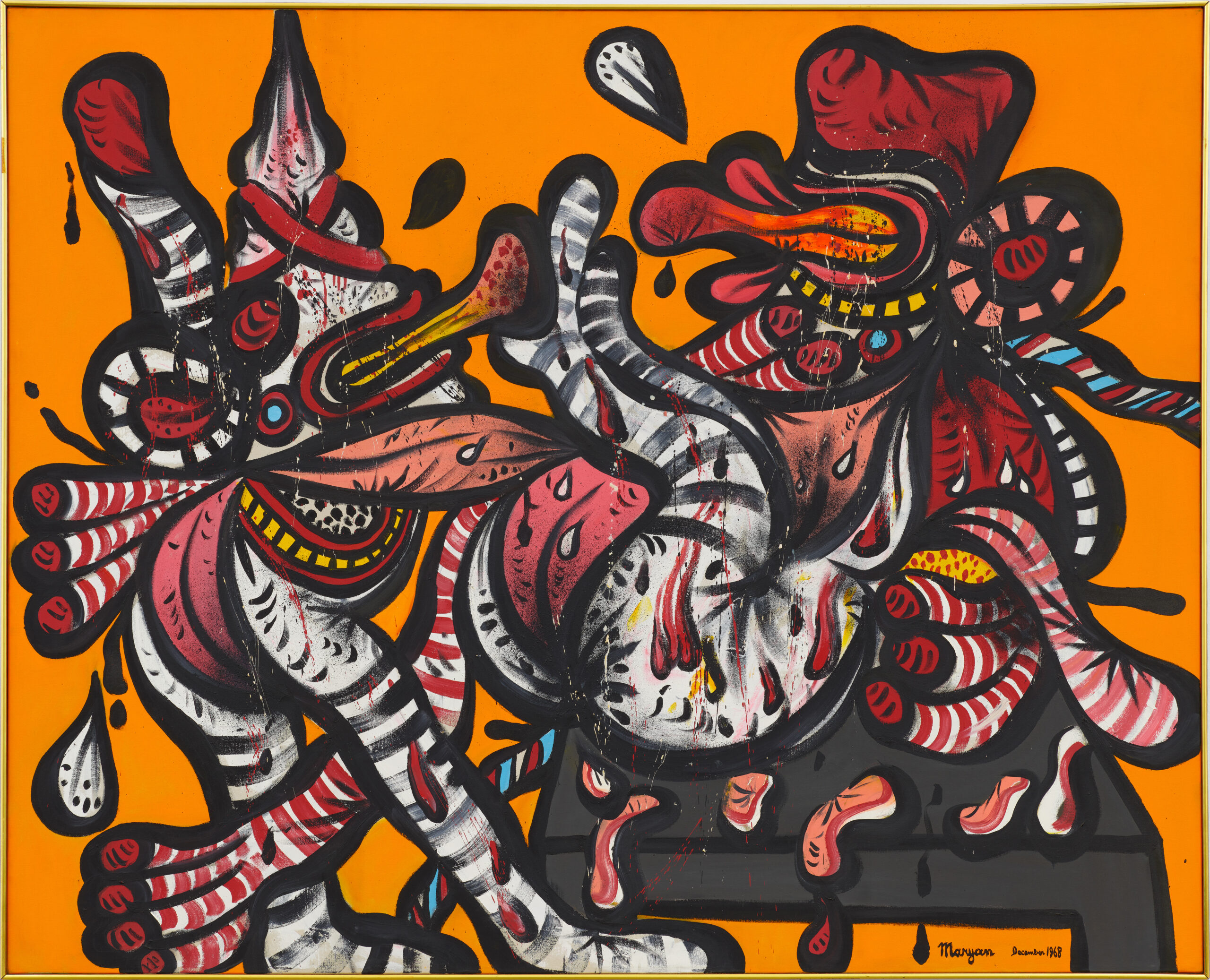 He shed his real name to reinvent himself from the person who was persecuted by the Nazis. While much of his work was born of the atrocities he suffered, the artist known as Maryan was firmly against being labeled a Holocaust artist. His wife, Annette, fiercely guarded his work for the same reason after his death at the age of 50 in 1977.

This aversion to what could be a rigid classification of his art explains why, after viewing the Museum of Contemporary Art, North Miami’s comprehensive and prolific exhibition, “My Name is Maryan,” you are left with the feeling that Maryan might just be one of the most overlooked artists of the 20th century.

The exhibition is all-encompassing – “holistically” examining the chapters of the artist’s life and work, according to MOCA guest curator Alison M. Gingeras. Four decades of paintings, sculptures, drawings, and his 90-minute black-and-white film take up 12 galleries inside. In addition to 176 of Maryan’s works, there are 36 pieces by his like-minded contemporaries included, and 29 ephemera.

“My Name is Maryan” opened on Dec. 2 during Miami Art Week and was set to close at the end of March. It has been extended through Oct. 2, 2022. It needs to be seen. 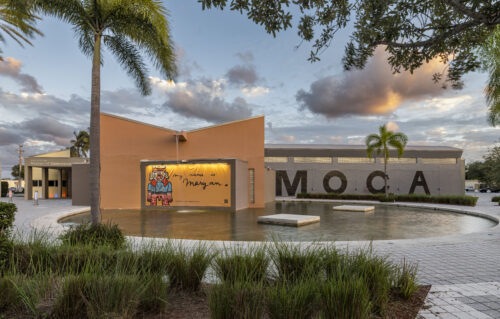 “It’s been three years in the making,” says Chana Budgazad Sheldon, executive director of MOCA about the large undertaking. After it closes at the North Miami museum, “My Name is Maryan” will travel to the Tel Aviv Museum of Art for a five-month showing beginning in December.

Gingeras explains that while Maryan’s widow physically preserved his work, she was also known for being “overprotective of his legacy.” She says Annette “thwarted the work of art historians and researchers,” especially those who were interested in the works that explicitly addressed his Holocaust experience. “This certainly was an impediment to his legacy,” she says.

For MOCA, Sheldon says the museum’s mission perfectly aligned with an exhibit of Maryan’s oeuvre.  “The work that we do is both focused on connecting with the community, lifting up diverse voices and stories, and featuring unexplored art and artists.” Based on the scholarship and a selection of never-before-seen works from the artist’s estate, the intent is to cast a new light on Maryan’s contributions. “As comprehensive as this exhibition is, it really is a new beginning for understanding the artist,” says Sheldon.

So, who is Maryan? Born in 1927 as Pinkas (sometimes written as Pinchas) Schindel to Abraham Schindel and Gitla Bursztyn, the first 12 years of his life were unremarkable in Nowy Sącz, Poland. But in 1939, his Jewish family was captured by the Nazis, placed in forced labor camps, and Auschwitz and Birkenau concentration camps. He was imprisoned under his mother’s maiden name of Bursztyn and survived several near-death encounters. Injuries inflicted upon him made it necessary for his leg to be amputated. The rest of his family perished. He was 18 years old when Russians liberated the camps in Germany.

He then went to Israel to begin his art training and after that to Paris, where he adopted the name Maryan, a common Polish first name, according to Gingeras. 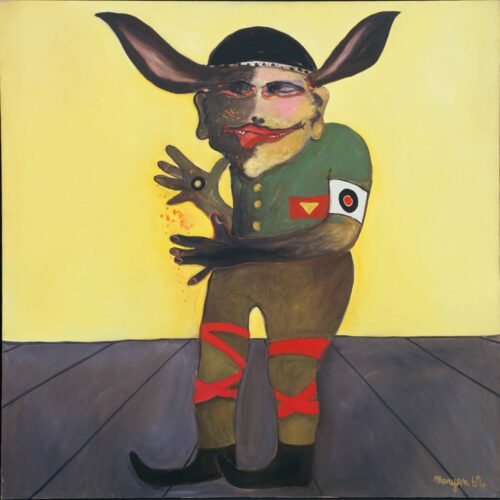 The story of how “My Name is Maryan” was born at MOCA comes from a personal encounter.  Sheldon joined MOCA in January of 2018 and recalls that she had only recently been appointed director when she was touring Art Basel Miami Beach at the Miami Beach Convention Center. It was the first year that New York gallery Venus Over Manhattan was exhibiting. There, in booth S5, were a group of paintings depicting wildly garish, cartoonish figures, yet sinister in their slyness. These were Maryan’s “Personnage” paintings.

“I recognized the work from catalogues that used to sit on the bookshelf of my mother’s house that I remembered from a young age,” Sheldon says.

Sheldon’s grandmother was one of the Hidden Children of the Holocaust. “She was hidden in a convent in France with the woman who ended up married to Maryan,” Sheldon recalls.

She says she didn’t meet the artist before he passed away, but she had met Annette and knew that her husband was an artist. “When I started working in the arts in my 20s, Annette invited me to her apartment on the Upper East Side. It was basically a trove of paintings and like a time capsule of all of his works. His paintbrushes, his journals that she had been protecting for years were there. At the time I thought, ‘Someone should archive this,’ ” she says.

After connecting with the Venus Over Manhattan gallery and reaching out to Gingeras, a writer and curator who is based in New York and Warsaw, the journey of “My Name is Maryan” began.  “It’s been quite the adventure,” Sheldon says.

One of the last works of the Polish-Jewish artist included in the exhibition is the 1975 black-and-white film shot on 16mm, “Ecce Homo,” which took a year to make. He is sitting in his Chelsea Hotel studio in a straitjacket, a Star of David drawn across his chest. He reenacts Holocaust memories, giving first-person accounts. The sketchbooks that preceded the making of the film are also included in the exhibit. The film and the books are compelling accounts offering a deeper understanding of the artwork on display. 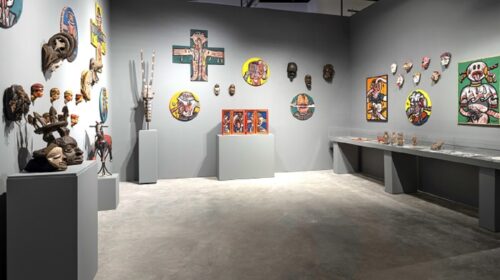 Gingeras traveled to Maryan’s hometown of Nowy Sącz. Back in New York, she visited friends and neighbors of Maryan’s from his days living in the Chelsea Hotel. That storied apartment-studio is re-created in the MOCA exhibition. It is, in fact, the first gallery in the retrospective.

“I wanted the viewer, especially one who had never heard of Maryan, to walk into the ‘Chelsea Hotel’ approximative installation and be immersed in his visual universe, to be saturated by the optical power of his painting when he was at the height of his artistic powers,” says Gingeras. She reconstructed the Chelsea Hotel studio from photographs from his time there in the 1970s.

And, it was in New York where he once and for all changed his name to Maryan S. Maryan.

For the exhibition at MOCA, Gingeras was definite in her decision to not follow a conventional linear chronology.

“If we began with Maryan at the start of his artistic life, we would have immediately overwhelmed the viewer with the harrowing tale of his childhood under Nazi occupation and imprisonment,” says the guest curator. “It was important to me that viewers be able to read his work on multiple levels and not just through the lens of his trauma and survival.” 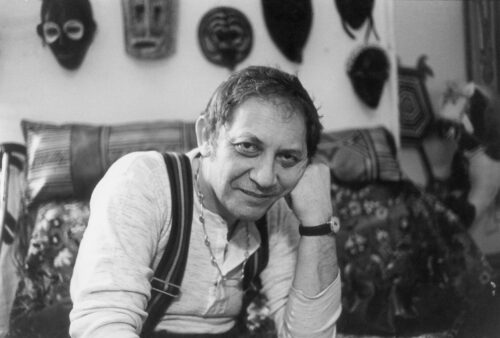 The curator says it wasn’t easy to select what works would be included. “Maryan was a prolific artist. By all accounts, when he painted or drew, he would work in permutation and produced a lot of work in one go. It was challenging to edit down the work, but I attempted to give an overview of the range of his oeuvre,” says Gingeras.

She highlighted key themes in his paintings, while also going into depth about his groundbreaking film and drawings he made while in therapy for his Holocaust-related trauma.

There is excitement about the next chapter of “My Name is Maryan” as the retrospective heads to the Tel Aviv Museum of Art. Gingeras is working with Noa Rosenberg, Tel Aviv Museum’s Curator of Modern Art.  “She has unearthed new information about his time in Israel, which will be an important part of the Tel Aviv version of the show,” says Gingeras.

When it opens at the museum in Israel, Rosenberg, speaking from Tel Aviv, says it won’t be a carbon copy of MOCA’s exhibition. Rather than an all-out retrospective, there will be more emphasis on the three years the artist spent in Israel and a larger conversation, including but not limited to, how Israel received Holocaust survivors.

“His time spent here is unfortunately a reminder of how difficult, how detached, and how misplaced he was. When you talk about this artist here, there are few people who know the work, and not many know who he is still,” says Rosenberg. 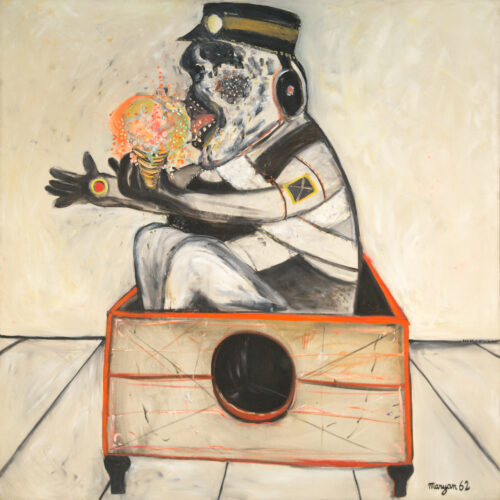 She remarks that she was surprised to discover that there were more than 20 pieces of Maryan’s works that had been donated to the Tel Aviv Museum of Art.

“It is unbelievable in doing the research that we found so many works that he did while he was here, and they are very different from the ones that he made later on,” Rosenberg says.

Rosenberg says those works will be added to “My Name is Maryan” in Tel Aviv along with letters discovered. She says there will be two questions that will be part of the discourse: “Where does Maryan belong in art history? And to talk or not talk about the Holocaust?”

Her hope is that the exhibition can travel after its Tel Aviv stop to Poland and Germany, although she emphasizes, nothing has been decided.

“It is very moving to me that his work would return to the Tel Aviv Museum of Art where he had a major exhibition in 1977, opening just months after his untimely death. The Tel Aviv project will contribute to our effort to tell as much of Maryan’s story as possible,” says Gingeras.

WHAT: “My Name is Maryan”