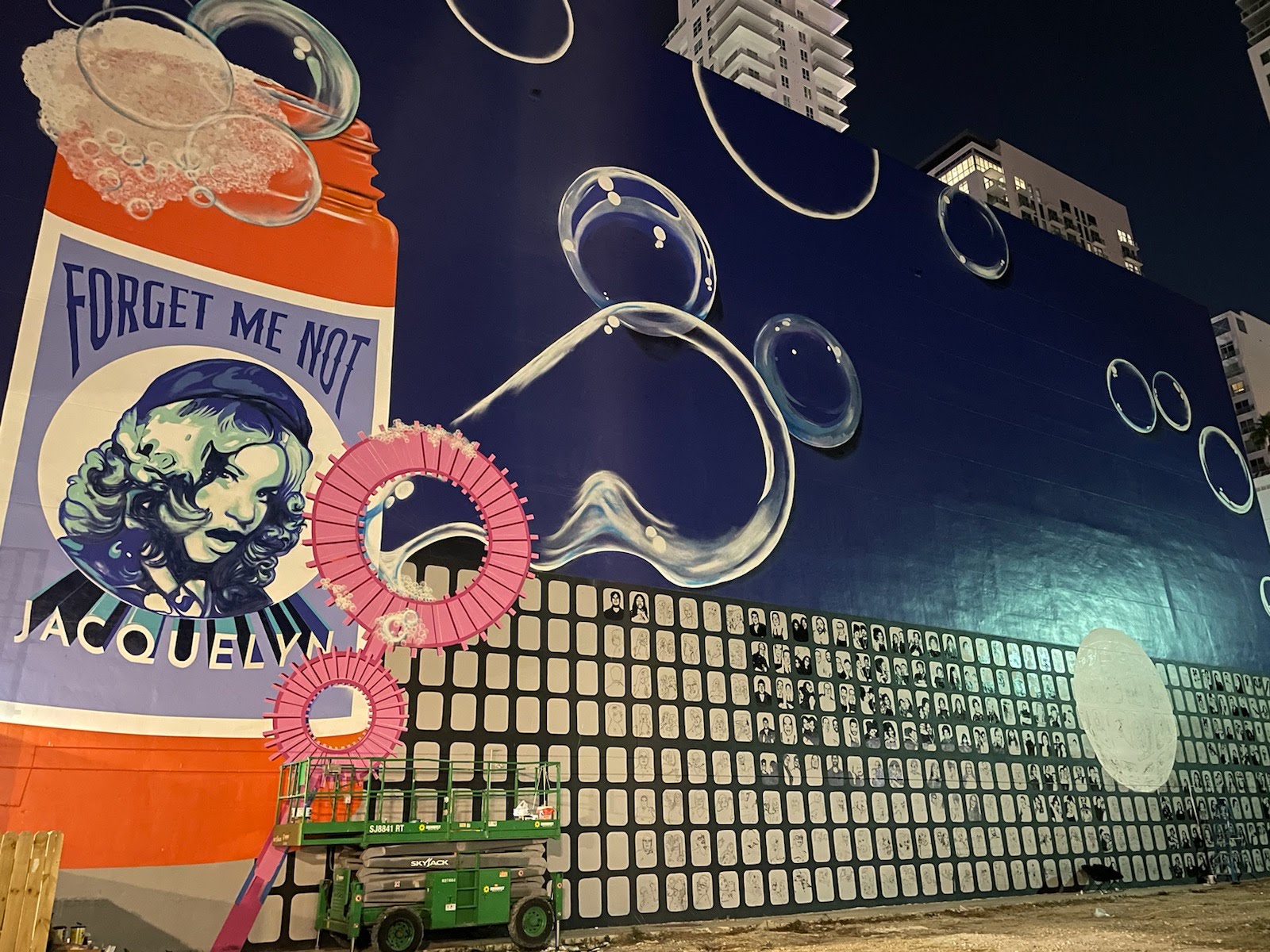 At first, no one wanted to give them the time of day.

Maren Conrad, a Sacramento, Calif.-based artist, needed someone — anyone — to pose for her contribution to the Miami Mural Festival.

“We were honestly begging people to take a photo of them. It was so weird … We were chasing people down,” Conrad said, with a laugh. “And the more we tried to sell this, the creepier we sounded.

“‘Don’t you want a picture of your kid on this wall?’” she would say to skeptical pedestrians who passed her by. The approach, needless to say, was not working. Yet she persisted, and the hard work paid off.

Conrad’s sprawling 11,000-square-foot piece, at 261 NE First St., features a giant bubble bottle bearing the words, “Forget Me Not Jacquelyn,” next to the images of more than 1,000 people who finally said yes to the proposition. Titled “Legacy in Levity,” it is one of the works featured as part of the Miami Mural Festival, running through Sunday, Dec. 5, in the downtown and Wynwood areas.

Festivalgoers will have the opportunity to watch artists work live on their projects. A map detailing the locations of all pieces is available via the festival’s website.

“About two years ago, we decided to take a more active approach in community involvement and creative placemaking,” Ward said. “We started looking at downtown Miami and the Flagler districts. There is really a very big absence of public art, and we decided that we wanted to use the impetus of Art Basel to help address that.”

The impact of art, said Ward, is substantial: “Community access to art is very important for just general happiness and the overall benefit of the city.”

Additionally, from an economic development standpoint, “mural street art and creative placemaking has become a huge tool in terms of generating foot traffic, which in turn generates dollars spent, which in turn generates tax revenue and benefits for the overall city … What we want to do, so that there are more economic opportunities at the end of the day, is to create public art for the general good, but it’s also [to think about] how we can find ways to improve the neighborhood so that more businesses come in.”

Miami artist Daniel Fila, who is also known as Krave, has seen for himself how art has the ability to completely transform neighborhoods.

“It’s a proven model that works,” he said. “It brings pride to communities and forms a unified identity.”

This is why he decided that it was important to help out, not only by producing the festival, but also by contributing his own piece.

“I’m doing one behind the old Macy’s building [on Flagler]. It’s going to be about 80 feet tall. It’s going to be a tribute to the ‘Mother of Miami,’ Julia Tuttle, and also Marjory Stoneman Douglas,” Fila said. “It’s a representational portrait in an abstracted way where I can note all these different contributors to the development of our city.” 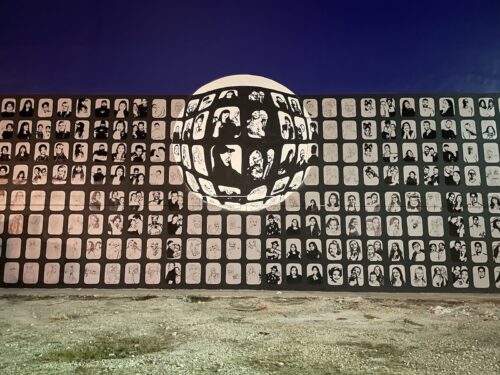 Maren Conrad’s “Legacy in Levity” mural is made up of images from community residents. (Photo courtesy of the artist)

Ward said this year’s event is just the beginning.

“This is going to be something that grows annually … in subsequent years we hope to extend it to all parts of the county,” he said. “We’ve really done our best to give opportunities to local artists, to make sure that the artists that live in Miami year-round have that opportunity, which doesn’t always happen around Art Basel.”

Conrad said she was particularly sensitive to that issue. Her mural, inspired by the passing of her friend, a photographer named Jacquelyn Anderson, incorporates elements of Miami’s different neighborhoods and the people who live in them.

“We really wanted to capture the spirit of Miami and the identity of Miami, even though we’re a California-based crew,” Conrad said. “We went out to the community and we worked with the HistoryMiami museum and La Cantina Restaurant … and our artists hit the street.

“There was this funny group of Trumpsters, [as well as] people who hated Trump. People who were diehard Floridians, who have been here for four generations. People who just moved here yesterday. Our criteria was you had to live in Miami. Other than that, you could be anybody.”

But there was one person she remembers in particular.

“There was a gentleman who I think really captured what we were trying to say. It was a man in a wheelchair. He wasn’t homeless, He wasn’t asking for money or anything. He just had a little sign with him that said, ‘Even without legs life is beautiful.’

“Even when our loved ones are lost, we can breathe for them. We can create for them. We can honor them. We can carry on their work,” she said. “We’ve all been through hell, and all of us as a community are finding ways to find happiness and be together again. And this gentleman with that little message on his lap really is exactly the sentiment that we were trying to get to.

“As a community we can overcome anything.”

Though transportation between the murals will not be provided, HistoryMiami museum is hosting a walking tour centered on the murals in downtown Miami’s Flagler District. The free event is scheduled for 10 to 11:30 a.m. Saturday, Dec. 4. For more information, visit historymiami.org/city-tour/miami-mural-festival-walking-tour.

WHERE: Throughout Miami’s downtown and Wynwood neighborhoods

INFORMATION: See the full list of mural locations at 305muralfestival.com