Whether or not she’s in sight of the sea, artist and designer Michele Oka Doner has the soul of a beachcomber, ever curious to comb her imagination for paths linking art and science. Those paths have taken this New York-based artist and Miami Beach native as far as China. In 2021 her “Velocity of Light,” inspired by clusters of stars, was installed at the Shanghai Astronomy Museum.

Growing up in Miami Beach, Oka Doner recalls how much she loved to play on the beach, obsessively sorting through sand to collect fragments of coral and shell. To her, they resembled an alphabet, a calligraphic record of natural history.

Those calligraphic fragments would one day find their way into her widely exhibited body of work melding art and natural history – work that now spans five decades. The upcoming conference, “Aspen Ideas: Climate,” from Monday May 9 through Thursday, in Miami Beach, recognizes that our coastal region is seriously threatened in this era of climate crisis. It will also pay homage Oka Doner’s various contributions to public awareness of the natural history of Miami Beach and South Florida, interlacing the history with her art.

“We’re going to give (the book) to sponsors and speakers because it tells such a beautiful story about Miami’s rich history,” says Michele Burger, the chief of staff for the City of Miami Beach. 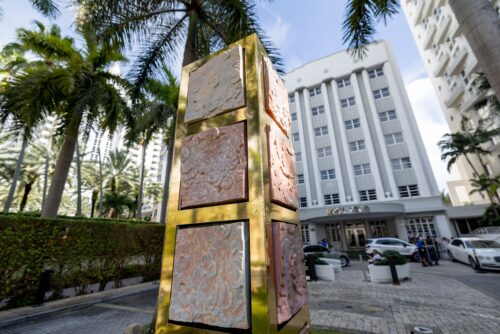 Lauren Shapiro’s large sculptural intervention will be on display at the Royal Palm South Beach during the “Aspen Ideas: Climate.” The work, entitled Site-R16 Transect 1, refers to a now-extinct coral population. (Photo courtesy of Shireen Rahimi)

Conference attendees will also see subtle reminders of Oka Doner’s “A Walk on the Beach,” the stunning bronze and terrazzo concourse extending over a mile through Miami International Airport and commissioned by Miami Dade County Art in Public Places. The concourse is embedded with nearly 9,000 unique bronze forms, echoing the biodiversity of South Florida aquatic plants and creatures.

An image of one of those bronze forms adorns tote bags, water bottles, and staff and volunteer T-shirts at the conference. The image is inspired by a colony of star coral where each cell in the colony is a separate living creature but interconnected with the others in order to survive and thrive.

As Oka Doner explains, “Like star coral, our human species can join together and function as a colony in order to navigate a rapidly changing environment.”

The May conference is the first time the Washington, D.C.-based nonprofit Aspen Institute has addressed climate change, where it is bringing together local and international policy makers, scientific experts, corporate leaders, and other stakeholders.

According to Jon Purves, associate director, media relations and communications for “Aspen Ideas,” more than 70 to 80 educational programs at venues, both held in- and outdoors are in place to engage those attending with ideas about ways to address the dramatically altering climate. Attendance is expected to exceed 800, Purves says. 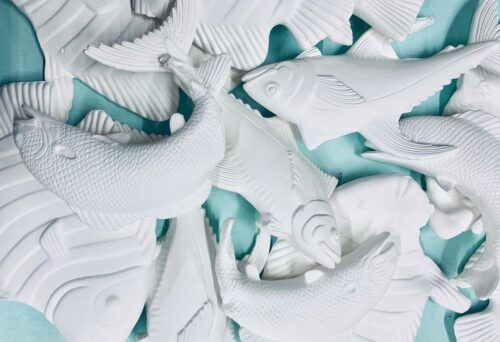 Burger says Oka Doner inspired her to include artists in the event. Deeply involved in the planning of “Aspen Ideas: Climate,” Burger notes that while individuals may have their own definition of climate resilience and sustainability, some may be inspired by art or design, food or fashion to ponder their own environmental footprint.

“We are suggesting using art as one of those vehicles to inspire people,” Burger says. “So, we’ve engaged about 15 artists to participate in some kind of visual art and performance art program.”

Oka Doner plans to attend the conference. She says she is curious to see how it will address the “monumental shifts” Miami Beach is facing, commenting that the area is threatened by both rising waters and winds from storms that are stronger than in previous generations.

And there’s the issue of South Florida’s incessant building on vulnerable land that is cause for concern, she says. 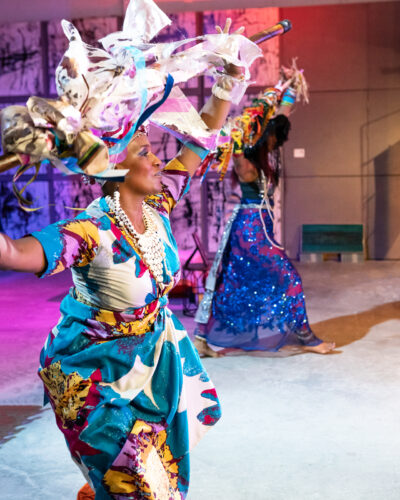 Performances at “Aspen Ideas: Climate” will include work by Michelle Grant Murray. Pictured is Rose Water Dance by Olujimi Dance choreographed by Grant Murray. (Photography courtesy of the artist.)

“It’s a cultural issue. We live in a culture that if you overeat too much you can take a pill. If you have too much sugar, you can go to the doctor for insulin. There’s been a pill for everything. And we have not taken personal responsibility. The planet is not here for our use and that’s how it’s been perceived.”
Oka Doner believes that developers are looking to big tech to solve the problem, or as she says, “deliver the pill.”

She continues: “They’ve sold that you can build up, and that things will evolve. Well, perhaps they could evolve but the problem is nobody knows when a Katrina-like moment will come.”

Pondering where we are today, Oka Doner says that the culture has shifted from where we were even a decade ago.

“I think the values of zero sum, winner take all, are much more apparent.” She expresses disappointment by “the inability of adults of grown adults to sit in a room and do what’s best for the community not for their constituency.”

How to move toward solutions?

She does not mince words.

“We need a council of elders. We need everyone working together.”

WHEN: May 9-12 with programming, receptions, field trips, performances, and art activations.