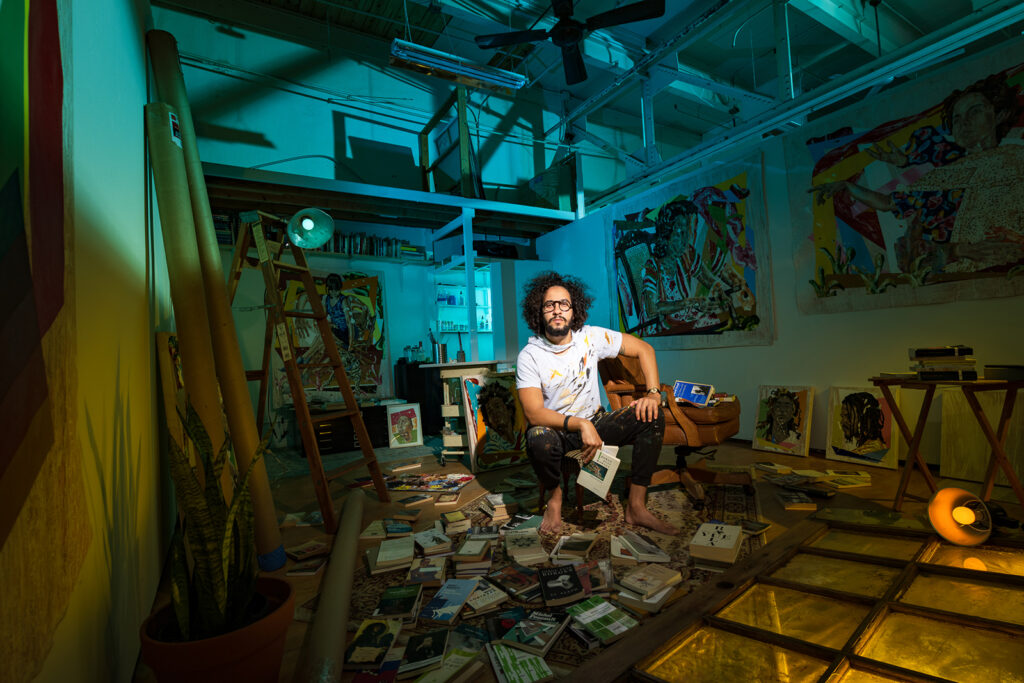 For the Cuban-born and Miami-based William Osorio, the question of identity is personal. (Photo courtesy of LnS Gallery)

“Margins of Truth” is the title of William Osorio’s exhibit at LnS Gallery in Coconut Grove – and it is, he says, a paradox.

“When we think of truth, we think of something that is absolute and complete. When I use the word ‘margins,’ I am confining truth to a space. When something has margins, it has limits, and there is something outside of the limits, which is the possibility of all the truths to come to existence,” says the Cuban-born and Miami-based artist. “Truth here has to do with reality, the reality of all the beautiful things in the world, but also the suffering.”

Absorbing his work, on display through May 22, it is noticeable that some of his paintings reflect the reality of the past year. His COVID-inspired works illustrate the state of inertia the whole world found itself starting last year. Pieces such as “Conversation with Simone,” “Paraiso I” and “Paraiso III” show the stillness of time and bodies waiting to return to normal or adapting to a new normal. Some subjects are on a sofa, others in hammock or reading.

“His works are mirrors in many ways of what we’re going through today, the challenges we’ve gone through over the last 18 months since COVID, having to deal with interior spaces, having to understand our position on a global scale,” says Sergio Cernuda, curator and co-owner of the LnS Gallery. “This is an important exhibit that allows you to dialogue with this perspective of inner spaces. It’s exciting to have an artist being so dedicated to do what an artist needs to do, which is to document and discuss what’s happening in their surroundings and our time.”

Cernuda says he met Osorio about four years ago by following the Instagram hashtag #MiamiArtist.

“I saw one of his paintings, so I clicked on it and I really loved the talent,” Cernuda says. “I visited his studio and that was the debut of a successful relationship.”

That is the power of the Internet and hashtags. This is now Osorio’s second solo exhibition at LnS Gallery.

“We believe that he is an artist that keeps pushing the boundaries of painting, [with] a figurative expressionist style that continues to challenge the idea of painting,” Cernuda says. “It’s an honor to have his paintings on our walls and showcase one of the local talents in Miami.” 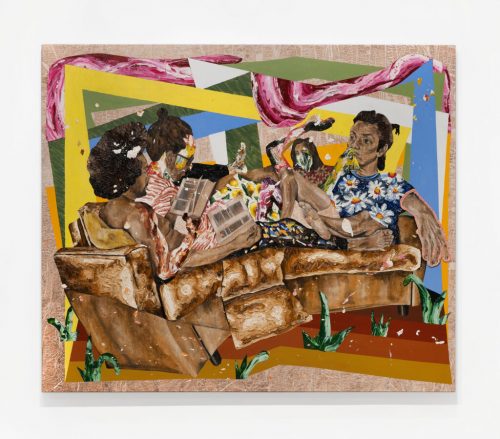 “Paraiso I” by William Osorio. (Photo courtesy of LnS Gallery)

The question of identity

Osorio’s “Margins of Truth” also explores the concept of identity as more of a journey than a destination, according to LnS Gallery. To the artist, the question of identity is personal.

“For me, it became a personal experience when I left Cuba, which is an island,” he says. “An island is a sort of planet in itself. When you leave the island, you realize that a lot of specific anthropological characteristics that you believed in were only yours and part of who you were.”

When Osorio arrived in the United States in 2007, he began meeting people from everywhere, “which is different from Cuba, where we have a very close political system and less foreigners.”

“At that point,” he adds, “I realized that leaving Cuba was the beginning of me climbing that self-mountain that was going to be my identity.”

He concluded that identity is something that is constructed by history and traditions. However, he insists, some traditions are not ethical today, being more destructive than constructive.

“Building an identity becomes a process of removing skins that have been given to you by your past and finding the skin you want to be seen in,” he says. 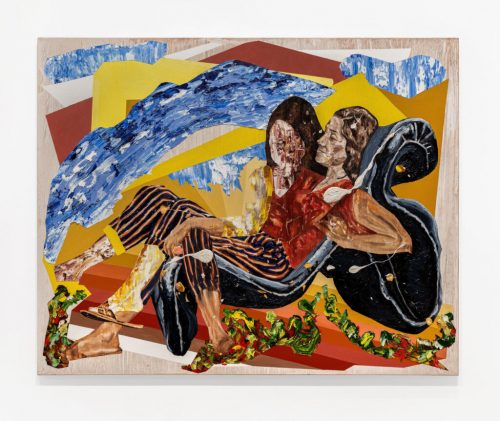 “Contingency I” by William Osorio. (Photo courtesy of LnS Gallery)

The art of Osorio

Though he has some formal training – having studied sculpture and painting in his hometown of Holguin – what defines Osorio as an artist, according to LnS Gallery, is “his rejection of continued studies through the traditional academic path,” and “the spontaneity and expression that he aims to achieve within his artwork.”

Explaining his approach to painting, Osorio says he wants “to put a light into the kaleidoscope of the human condition.” In order to achieve that, in addition to philosophy and literature, the artist lets several movements influence his work, such as action painting, also known as abstract expressionism. Geometric figures are a constant in Osorio’s works. Artists Francis Bacon and Jackson Pollock are some of his influences.

He is also an avid reader of international philosophers and poets, such as Friedrich Nietzsche, Martin Heidegger, John Milton, Hermann Hesse and Jorge Luis Borges – whose books were in plain view during a recent visit to the LnS Gallery.

One of Osorio’s missions is to achieve authenticity. He admits, however, that it’s hard to be authentic while being fed information from everywhere, surrounded by meanings.

“We live in a system where everything already has a meaning. And the work of an artist is to create new things. How do you do that?” he says. “As human beings, we have the possibility to bring the infinite to the finite. That is how we create.”

WHAT: “Margins of Truth”

COST: Free; timed ticketing will use timeslots to allow visitors in and out of the space; visitors are urged to reserve their spot online