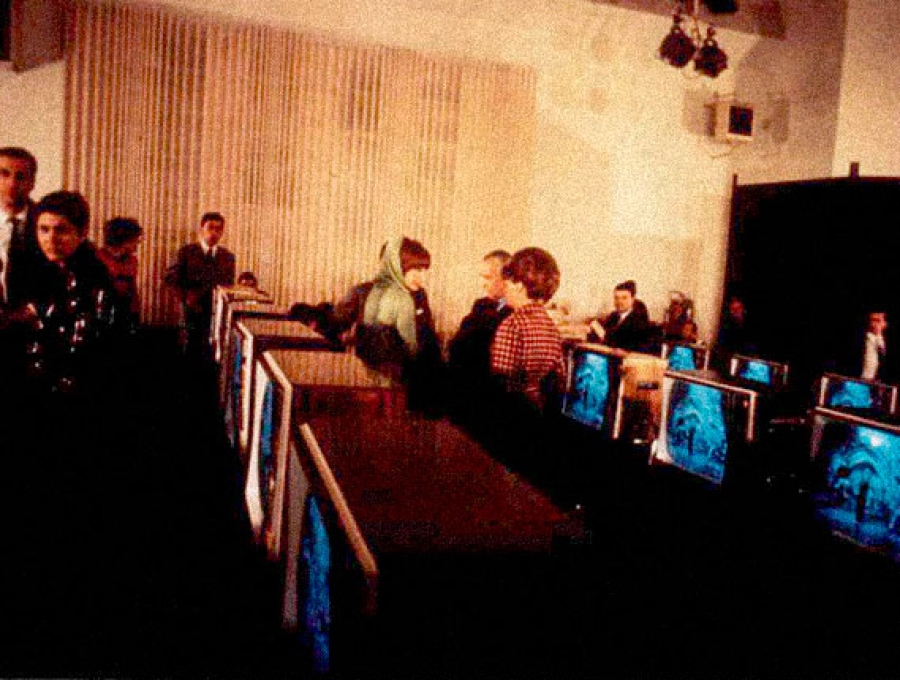 Months before the pandemic that shut doors of institutions throughout the region and around the world, Rina Carvajal was scouting projects for Miami Dade College’s Museum of Art and Design (MOAD).

The museum’s executive director and chief curator discovered “The Body Electric,” an exhibition by The Walker Art Center in Minneapolis that is a searing commentary on the way technology has evolved and continues to change our lives.

She planned to bring the exhibit to MOAD in November, but she’d had no idea back then that it would mark the museum’s reopening after nearly eight months of closures due to the COVID-19 pandemic.

“Honestly, all this virus situation that we have gone through with the pandemic has shown more than ever how dependent we are on technology,” Carvajal says about the theme of “The Body Electric,” which runs through May 30 at the museum’s space in downtown Miami’s Freedom Tower.

Though not organized chronologically, the exhibition features influential artists beginning from the late 1950s through the present day.

“There is certainly, you can say, a canon of artists engaging with new technologies with the screen and exploring issues surrounding the body and identity,” says Pavel Pyś, curator of visual arts at the Walker Art Center, who first organized the exhibit. “How have artists engaged with that space between the analog and the digital, the real and the virtual, the place of the world and the space of the screen?”

Pre-pandemic, “The Body Electric” was displayed in its original Minneapolis home and at Yerba Buena Center for the Arts in San Francisco. Bringing it to Miami for display in the times of COVID-19 created challenges and opportunities. Both curators agreed that organizing the exhibition for Miami was more complex, robust and ambitious than it had been for previous venues.

Because of its subject matter, the exhibit was to be extremely interactive – but how to make it touch-free now?

“We wanted to do it in a way that was user-friendly,” Carvajal says. “We didn’t want to put apps or QR codes that people have to put on a phone or download an app. I did a lot of research just to figure out how we are going to do this, and we found the solution that was technologically easy for people, so people can enjoy the show.”

The solution: The team at MOAD created interactive elements, installing directional speakers and motion sensors to activate the digital content.

In order to support audience participation without having touch points, organizers had to adapt the space and create immersive environments by investing in new technologies and working with some of the artists to adjust their masterpieces.

“The exhibition was full of single-channel videos that would [typically] be experienced on headphones,” Pyś says.

Then there was the major installation by Trisha Baga, an incredibly immersive experience titled “Mollusca & The Pelvic Floor,” which required the use of 3-D glasses.

“There were many conversations that we had among the curatorial team in terms of how we adjust the show … but also with some of the artists in terms of adjusting their work to be shown in a way that is safe, given that we are in this situation,” Pyś says.

As far as selecting the art, Pyś says he discussed Miami audiences with Carvajal and wanted to highlight a diversity of voices.

“We added works that we felt were necessary to see in Miami by artists who maybe hadn’t been seen much in this city,” he says. “So that was one of the key things. I wanted the exhibition to have a greater relevance to the community.”

With the large space inside The Freedom Tower, organizers were able to add 27 artists, some of whom were Latin American, who had not been included in previous presentations.

Additions for Miami included Marta Minujín, an Argentinian artist and pioneer of performance art, video, and soft sculpture, and Venezuelan artist Claudio Perna, who explored conceptualism through collage and photographs, among other artists.

“I think it’s relevant to Miami because there’s such a large population from Latin America living here that people will be interested in knowing what was the contribution of some of Latin American artists to this conversation,” Carvajal says.

“It’s a gigantic show. You have 50 years of history of artists interfacing with technology and showing the importance of technology in everyday life since the invention of television.”

WHAT: “The Body Electric”

WHERE: Museum of Art and Design at MDC, inside The Freedom Tower, 600 Biscayne Blvd., second floor, downtown Miami

MUSEUM ADMISSION: $12 for adults; $8 for seniors and military; $5 for students (ages 13-17) and college students (with valid ID); free for MOAD members, children 12 and younger, and MDC students, faculty and staff. Purchase tickets online or in person at The Freedom Tower.