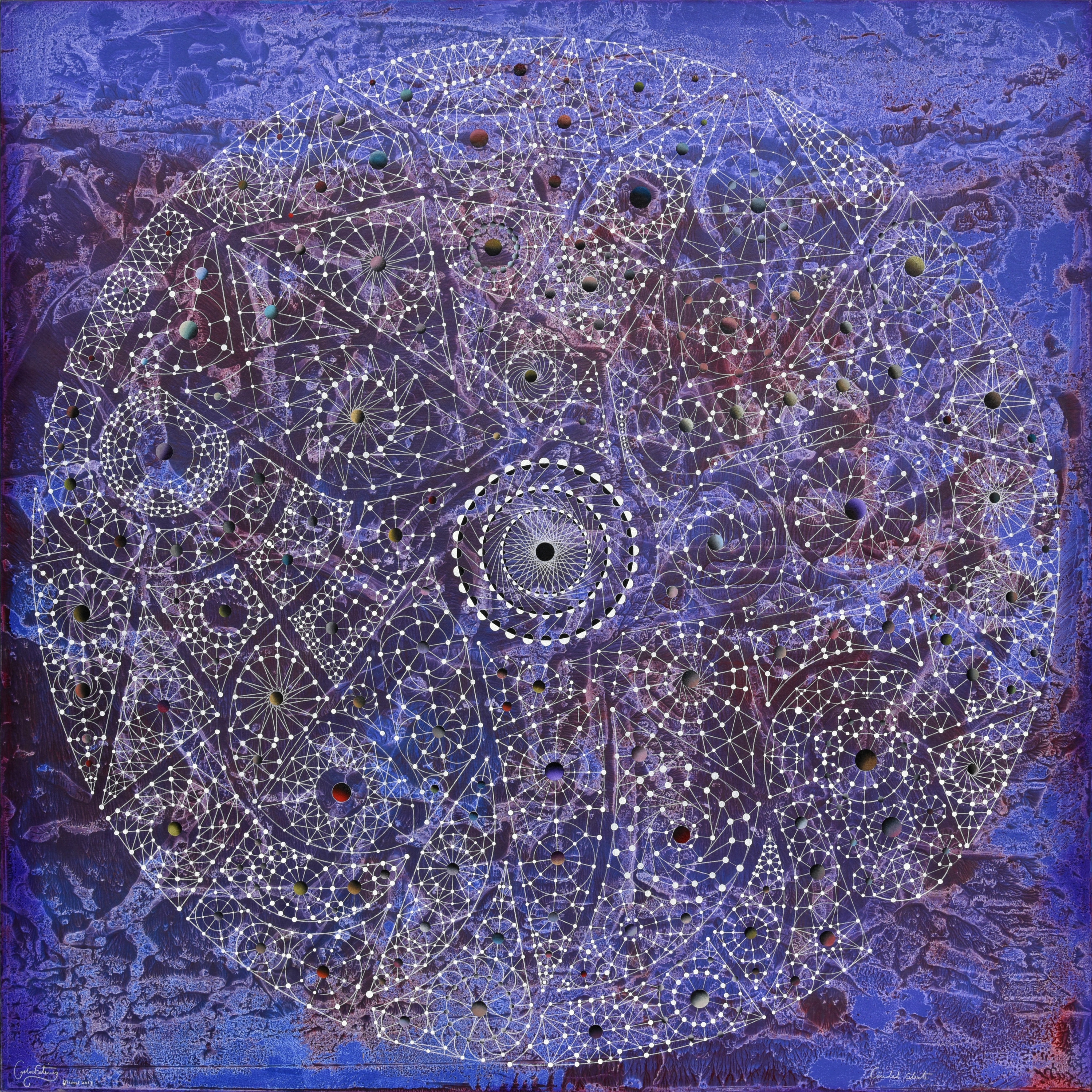 These maps will not make a difference if you are lost.

These maps will not get you from point A to point B.

These maps could even make you more lost than ever.

And, just maybe, that might be a good thing. You could be startled into discovering a distinctive new way of seeing the world.

Maps and their traditions have long found their way into the work of Cuban-born artist Carlos Estevez. He’s also taken creative cues from illuminated manuscripts, ancient classical and medieval literature, astronomy, and art history. His current show at the Lowe Art Museum, “Cities of the Mind,” charts a cartographer’s curious quest to map the rich historical and metaphorical life of cities.

This creative strategy merges what sometimes resemble architectural blueprints of built environments with his own delicious, time-traveling imagination.

He amplifies that imagination with painstaking techniques. First, he treats canvases with oil paint applied in assorted ways, from sponging to wiping with layers of colors. Next, he places detailed watercolor pencil drawings over that surface.

In addition, another layer of patterns, created by stenciled dots and geometric shapes, distinguishes these intricate, obsessive paintings. The effect can be mesmerizing, sometimes spatially disorienting — not at all what you’d expect from a conventional map. 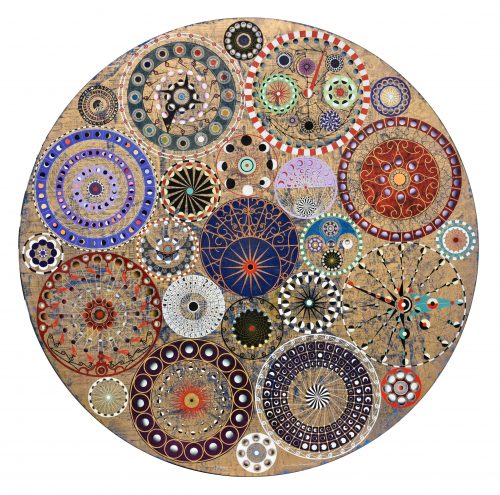 “Inner Vision of the Outer Space” (2017) is an homage to the famed astrological clock in Prague’s Old Town Square. (Photo courtesy of Carlos Estevez)

These nine monumental, map-inspired paintings occupy a single gallery at the Lowe that’s been painted a deep royal blue. For the most part, this shade of blue enhances their vibrant, even at times mystical, presence. The paintings “Thera” and “Savannah,” with subdued tones and less inventive compositions, don’t match the show’s overall intensity.

“I was born in the heart of Havana … Palaces, castles, squares, and colonial houses surrounded my neighborhood,” Estevez writes in the exhibit catalog. “It was there I learned to observe life. When I think of Havana, I imagine the city’s profound relationship with its inhabitants. The same thing happens when I take up temporary residence in or even visit other significant sites, including Venice, Paris, London, and Madrid (to name but a few).”

A passionate traveler thanks in part to artist’s residencies in the United States and Europe, Estevez was inspired for this exhibit by his visits to cities including Athens, Avila, Istanbul, Prague, as well as Savannah, Ga.

“Inner Vision of the Outer Space” is a stunner. It shines with glorious color and an elegant, rhythmic composition. The artist sees this painting as an homage to the famed astrological clock in Prague’s Old Town Square. Formally, the painting does suggest the inner workings of a clock, recalling how a vintage timepiece contains circular mechanical devices known as movements as well as gears propelling their timekeeping motion behind a clock’s face.

Animating “Inner Vision of the Outer Space” is a spirited composition with more than 20 circles, large and small. They are elaborately painted on a tondo, or round canvas, that’s 8 feet in diameter. It creates a movement for the eye that can be both dizzying and meditative, as the artist has transformed the singular medieval landmark of a singular city into a multi-tasking metaphor for the passage of time and ancient efforts to map starry constellations.

This painting’s accumulation of radiating circles can bring to mind the spectacle of a star-studded night sky, with the added benefit of outrageous color. Perhaps with this expansive work, the artist is making several creative leaps, alluding to the dramatic explosion of celestial colors brought on by the Northern Lights or aurora borealis. 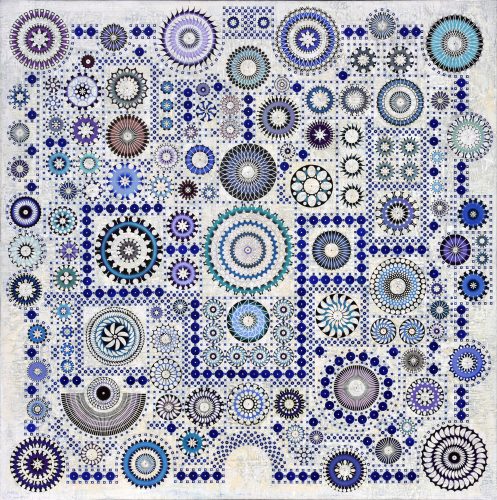 The painting “Celestial City” is an even more resounding witness to his fascination with starry nights. As he explains in the catalog essay, it was directly inspired by ancient maps of the skies, although he confesses that: “I never manage to decipher animals, creatures, or gods in the sky as figurative representations.”

For this painting, he envisioned “my own patterns in the sky, imaginary urban maps based on the cosmos.”

The lacy filigree of geometric patterns in “Celestial City” takes the eye on another circular journey, punctuated with multiple diagonal and curving pathways like avenues leading to a city center. They lead to the painting’s radiant heart, where concentric circles surround a piercing blue dot marking the midpoint of the canvas.

This dot is akin to the round oculus window found atop domed buildings throughout architectural history, from the Romans to the Renaissance and beyond. This type of window allows light to shine inside from a high vantage point as well as dramatically framing a view of the heavens.

What: “Carlos Estevez: Cities of the Mind”

When: On view through May 3

Cost: $12.50 for adults and children age 12 and older; $6 for students; $8 for seniors; free for members, children younger than 12, UM students and faculty and staff, US military personnel, AAM members, AAMG members

Top photo: The lacy filigree of geometric patterns in “Celestial City” (2017) takes the eye on a circular journey. (Photo courtesy of Carlos Estevez)