Knight Foundation grants aim to foster togetherness through the arts 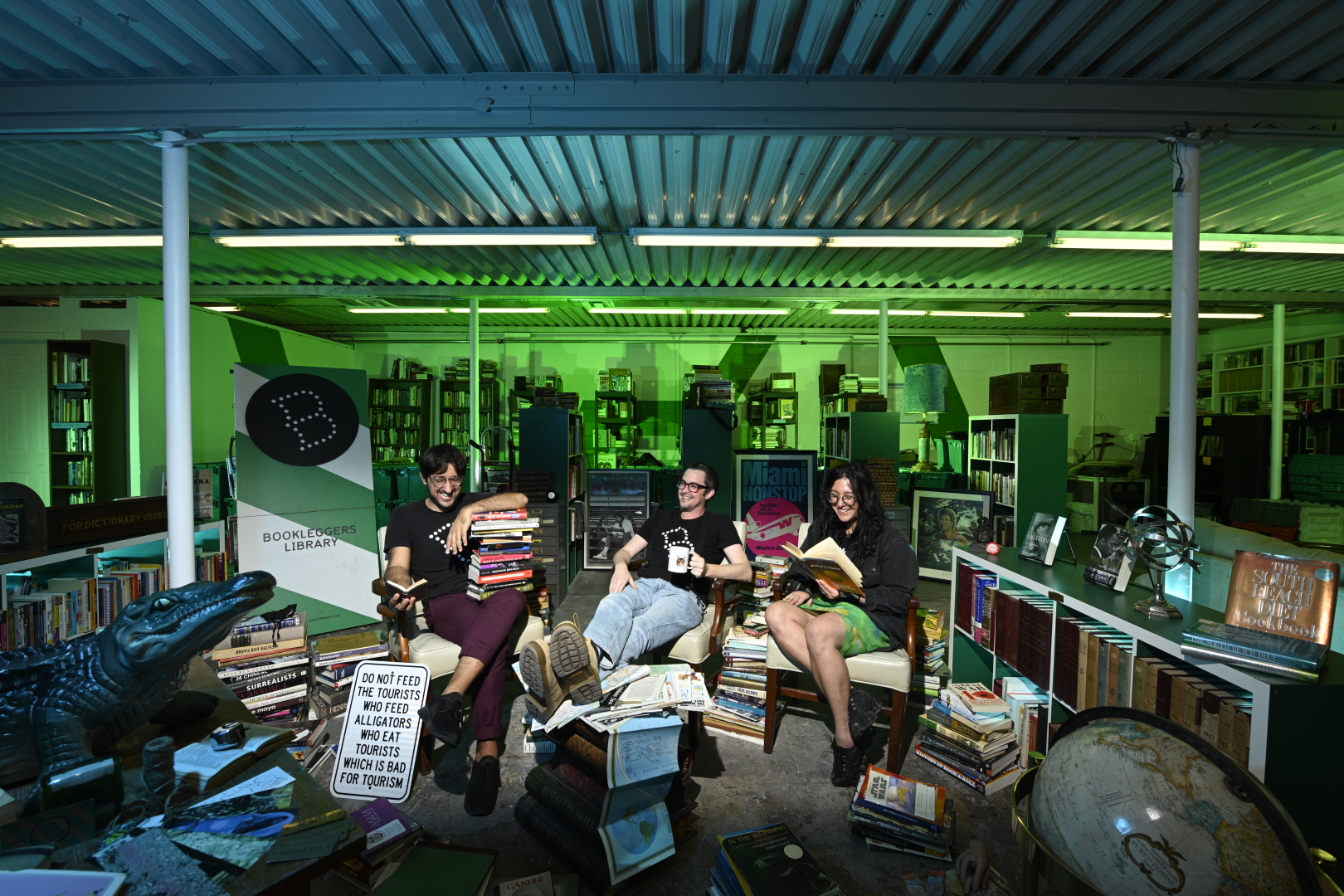 The Bookleggers Library was one of nine nonprofit beneficiaries of a $2.2 million investment by the Knight Foundation. Its staff includes, from left, Robert Colom, founder Nathaniel Sandler and Laura Monzon. (Photo courtesy of Pedro Wazzan)

Nathaniel Sandler founded Bookleggers in 2012 out of his Miami Beach apartment, with the dream of opening his own public library.

His mission: To use books as a way of building community.

Since growing out of its original home space, the Bookleggers Library had a few incarnations, moving to Mana Contemporary Miami in 2018, then to its current home at Wynwood’s Bakehouse Art Complex in 2020. These moves allowed Sandler to host ever-expanding community gatherings.

Despite the arrival of COVID-19, and the ensuing quarantines and shutdowns, Sandler continues working to keep that sense of community, exploring new ways of reaching its intended audience.

And his organization has received some sizable help, in the form of a $250,000 grant from the John S. and James L. Knight Foundation. The Bookleggers Library was one of nine nonprofit beneficiaries of a $2.2 million investment by the foundation, which has been creating grants to support arts groups during these unusual times.

“The big thing for us is the validation the Knight Foundation grant gives, along with the funding,” Sandler says. “To see our name up with institutions that are so established in the local public consciousness, it puts us out there in a way that is really meaningful.”

Each grant was tailor-made to the organization and its specific purpose, which was how the amount of funds was determined too, says Adam Ganuza, an arts program officer with the foundation.

“Bookleggers is not only rethinking the way that they do their in-person literary events, but finding ways, in these unprecedented times, to recreate new experiences to connect with audiences,” Ganuza says.

The grant will further the development of Bookleggers’ audiobook series and its online “Storytime for Grown-Ups,” which is an Instagram-based, storytelling series. It will also contribute to the completion of a Book Box Bicycle, a custom-made vehicle that will have wi-fi and musical capabilities and a front-load cargo box filled with a small library of books. The bicycle operator will be a dancer, musician or theatrical performer who creates an event around the Book Box Bicycle – for a multidisciplinary, outdoor experience, Sandler says.

“The idea is that we will be able to take the Book Box Bicycle out into the public and do scaled-down versions of our events, where the library becomes a one-to-one experience,” he explains.

The Bookleggers Library and other recipients are continuing to build on the foundation’s vision of a Miami where art is inclusive and accessible to all, even amid a pandemic, according to Victoria Rogers, Knight’s vice president for arts.

And these funds are meant as an investment in their evolution, Ganuza adds, helping “them transform into what their post-pandemic form will be.” 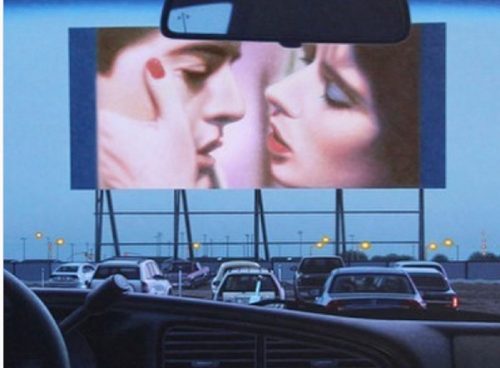 Another organization that is creating an indoor-to-outdoor experience is Nite Owl Theater, which received $128,800 for development of a drive-in theater in downtown Miami.

“It’s the next level for Nite Owl,” says Ganuza.

Nayib Estefan, son of Miami’s own Gloria and Emilio Estefan, opened Nite Owl Theater in the Miami Design District’s Melin Building in 2017. It was born out of his Secret Celluloid Society, which is dedicated to showing 35 mm films.

Thanks to the new funds, Nite Owl can transition from 35 mm to laser digital cinema projection, which will be retrofitted into an airstream trailer. The mobile projection booth will enable Nite Owl to host drive-in theater experiences and launch a four-week film series in a green space covering an entire city block.

“[Estefan] has this incredible ability to generate excitement around films – and not first-run films,” Ganuza says.

The largest grant given in this round of funding, $750,000, went to another film-centric organization, Third Horizon.

“From the very beginning, the Knight Foundation has helped us explore an explosive growth,” says Third Horizon co-founder Jason Fitzroy Jeffers, whose organization began in 2016 to showcase an annual film festival of Caribbean and Caribbean-American filmmakers. “This investment is transformative. It empowers us to root down into what we are already doing but do so much more.”

The success of the film festival over the past four years has spurred a demand for Third Horizon programming year-round. “Be that at different museums, other film festivals, other art institutions,” Jeffers says.

A portion of the grant will get Third Horizon’s film residency programming up and running, in what Jeffers describes will be “the mentoring of seven different filmmakers per cohort in the creation of a film.”

As part of its continuing evolution, Third Horizon merged with New York-based Caribbean Film Academy (CaFA) – a move meant to provide Caribbean filmmakers with an even wider reach. The Knight Foundation grant propels that, Jeffers says: “With more funding, there’s stronger work, and with stronger work, there’s more investment. It’s all part of the transformation.”

Says Ganuza: “What Third Horizon has done is that they’ve gone from being an upstart film collective to becoming the primary source for Caribbean and Caribbean-American storytelling, especially through film.” 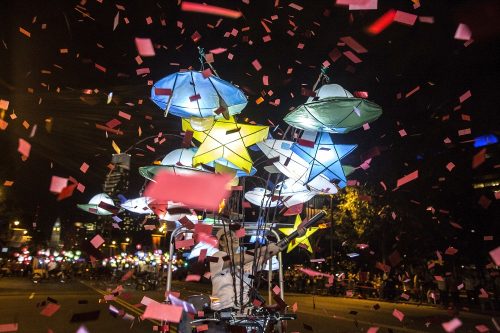 Cai Guo-Qiang’s “Fireflies” will be one of the installations in the outdoor public art exhibition, “Illuminate Coral Gables,” which opens Feb. 12. (Photo courtesy of Jeff Fusco Photography)

The Coral Gables Community Foundation’s Illuminate Coral Gables was already in the works when COVID-19 hit, but organizers had to pivot. The $35,000 grant helps finance the tech-enabled outdoor public art exhibition, which is set to run Feb. 12 through March 14 in the city’s downtown area.

“Some of the organizations that received grants had ideas that were already in development,” Ganuza says.

Plans for the exhibition began in January 2019. “So, this was way pre-COVID,” says Patrick O’Connell, co-founder of Illuminate Coral Gables. “It was in motion for 14 months before COVID took the wind out of our sails.”

O’Connell says they were “wringing their hands for two months,” asking themselves if they could make the exhibition possible in a pandemic environment.

“We thought about it for a couple of months and stopped the planning for a bit. We had 20 installations that we had planned, many of them static sculptures and art that would require people to gather around,” he says. “But the more we thought about it, and with our chief curator (Lance M. Fung), we were able to plan it in a way with sensitivity to COVID.”

The exhibition will turn the streets, buildings and public spaces of Coral Gables into an outdoor museum, says O’Connell. The installations of newly commissioned and existing works from world-renowned local, national and international artists are in the form of light sculptures, projections and interactive works that can be safely viewed from afar and within socially distanced recommendations.

The grant will support Illuminate Coral Gables in its first year, O’Connell says, and will build a foundation for the outdoor exhibition to become an annual event.

Adam Ganuza, who joined the Knight Foundation in 2016, says the sense of togetherness and connection that comes through arts and culture is “incredibly critical. (Photo courtesy of Knight Foundation)

The idea behind the Knight Foundation funding also was to bridge physical divides brought on by the pandemic and allow organizations to continue their forward-thinking as they adapt to a new reality.

“At a time when we are so disconnected from each other in so many different ways, not just physically, the sense of togetherness and connection that comes through these kinds of experiences – through arts and culture – is incredibly critical,” Ganuza says.

Money for institutions such as the Museum of Contemporary Art, North Miami ($250,000); the Institute of Contemporary Art, Miami ($150,000); and Prizm Projects ($200,000) is meant to spur their digital outreach strategies and online platforms, providing pathways for audiences to access new works via digital portals.

The Miami Dade College Foundation, which presented its annual book fair for the first time online in 2020, received a $150,000 investment to continue development of the event’s online streaming platform – created in response to the challenge of presenting author and literary gatherings in virtual spaces.

Miami City Ballet received $250,000 for continued support of its outdoor production of George Balanchine’s “The Nutcracker,” which allowed for the holiday classic to continue its annual tradition – albeit reimagined to navigate COVID-19 health protocols for dancers, production staff and audience members alike. It also received $67,500 to commission two digital dance works.

“What we’re funding here are parts of these necessary adaptations that arts and cultural organizations and artists had to make to respond to the constraints of the pandemic,” Ganuza says. “Certainly, some of that will stay with us moving ahead into the future.”