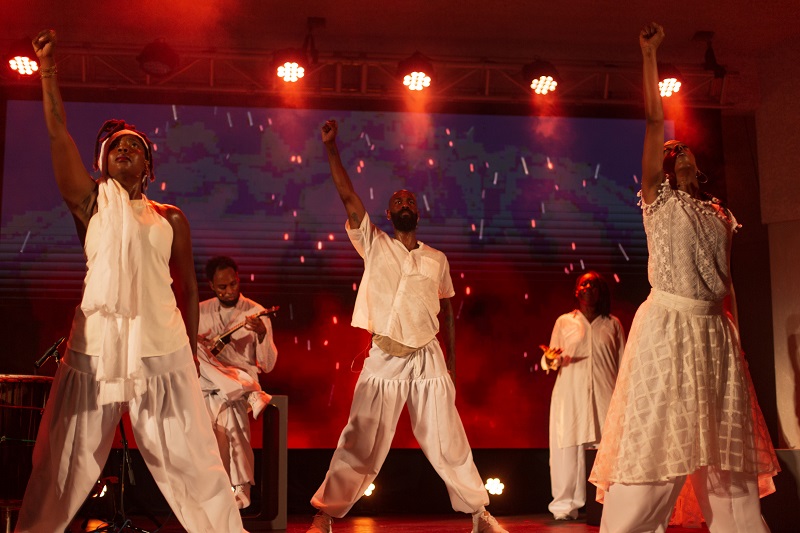 Hued Songs’ presentation of “The Juneteenth Experience” started in Miami-Dade County and is expected to expand north to Broward and Palm Beach counties thanks to funds from the Knight Arts Challenge. (Photo courtesy of Hued Songs)

A multimedia rock-and-guaguancó opera that captures the sounds of Miami. An homage to the songs of Juneteenth, born during the pandemic. And a downtown-centric outdoor theater experience with audiences arriving to each segment riding a bicycle, scooter, or anything else on wheels.

These three projects are among the 24 winners of the 2021 Knight Arts Challenge, selected by the John S. and James L. Knight Foundation for a combined $2 million in grants.

The aim of the grant program is to enable artists and arts groups to do their work. For some of the recipients, it helps propel projects that have already had their springboard but need a financial foundation to take them to the next level.

There are, however, some fundamental components, according to Adam Ganuza, chief of staff for the Knight Foundation’s President’s office. To win a grant, the projects must contribute to the greater good and have what he calls “a bona fide connection” to Miami.

“We aren’t interested in investing in projects or groups that parachute into a place, do their thing, and then leave as quickly as they came in,” says Ganuza, who helped review proposals along with a selected panel from throughout the arts community. “We look for an authenticity to place, i.e. Miami, then we consider the artistic rigor of the project itself.”

This year’s Knight Arts Challenge is part of a new yearlong initiative, titled “365 in the 305.”

“Especially just coming off of Art Basel and Miami Art Week, and having the eye of the international art world here … we launched ‘365 in the 305’ with the point being that the creative spirit is something that defines our community all year round, not just on Art Week,” Ganuza says. “For most of the projects that we are talking about, we are a starting line for them. We want to have a platform for them once they cross the finish line and that will be all within the framework of the ‘365 in the 305’ campaign.” 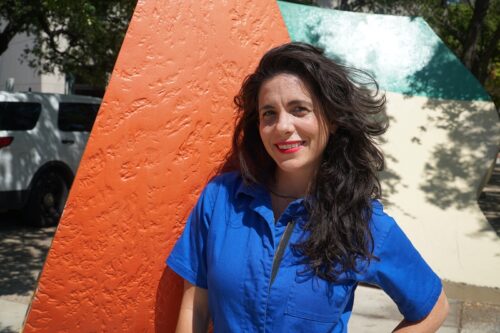 Since 2008, the Knight Arts Challenge has invested about $34 million on more than 400 projects ranging from large-scale public art to new theatrical performances, according to the foundation. Recipients are required to find matching funds.

“This is a grant program that scours our arts and cultural scene to find the best work that’s being done by people and groups that are an authentic reflection of South Florida,” Ganuza says, who added that about three-quarters of the projects are led by BIPOC (Black, Indigenous, People of Color) artists or groups, or those who explore BIPOC themes.

And it keeps paying forward. Opera singer and actor Kunya C. Rowley won a $20,000 award back in 2017 for his proposal “Hued Songs of Strength and Freedom,” and as a result today leads the nonprofit performing arts group, Hued Songs, which celebrates Black culture through experiences rooted in music. On June 19, 2021, Rowley produced and performed in “The Juneteenth Experience! Live from the North Beach Bandshell.”

This year, Hued Songs received $90,000 to broaden “The Juneteenth Experience” through performances in Broward and Palm Beach counties as well.

“The funding does a couple of things,” Rowley says. “It allows us to expand across multiple counties, but it also allows for us to keep the experience free to audiences. We really believe that the arts are a right and not just a privilege.”

The money also helps to pay the performers. “We want to be a platform where Black and Brown artists can be seen, heard and paid,” Rowley says.

To expand the experience, Hued Songs has found partners in Broward, with the African-American Research Library and Cultural Center in Fort Lauderdale, and in Palm Beach County, with the Theatre Lab at Florida Atlantic University in Boca Raton.

Rowley hopes the expansion will create more exposure for the event to become an annual tradition for families.

“This award is such a big step for us to expand and to let people know that ‘The Juneteenth Experience’ is something the community can look forward to every year,” he says. 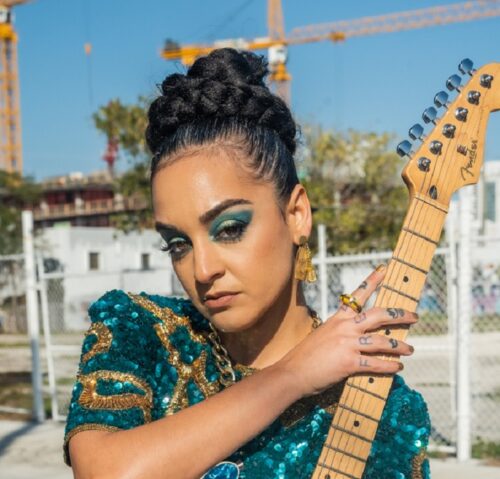 Miami-based multi-instrumentalist Sol Ruiz began her multimedia music opera with a commission from the Miami Light Project. Now with funds from the Knight Arts Challenge, she has a bigger vision for the project. (Photo courtesy of Miami Light Project)

Grammy Award-nominated singer-songwriter Sol Ruiz received $59,000 in this round of the Arts Challenge for her project, “Positive Vibration Nation.” The Miami-bred, Cuban-rooted performance artist released a concept album with her band, Sol and The Tribu, during the pandemic, which led to the larger vision of creating a multimedia rock opera.

Commissioned by the Miami Light Project, as part of its Here & Now program, “Positive Vibration nation” focuses on the unique sounds of Miami, fusing Caribbean music and modern technology. She presented excerpts during Miami Light Project’s Here & Now Festival earlier this year, and now has the chance to further the work.

“It consists of six characters, including myself, who embark on a journey to search their roots and, through their discovery and unification, they unlock their superhero powers,” Ruiz says. “This rock opera is a way to export what our identity is here in Miami, to take this project throughout the world and introduce the Miami sound and what creates its uniqueness, a melting pot of music.”

The other Knights Art Challenge 2021 winners are:

Gustavo Matamoros: “And Sometimes The Space is Full of a Previous Space” — $64,000

​​For more on the winning projects, visit knightfoundation.org/2021-kac-winners.