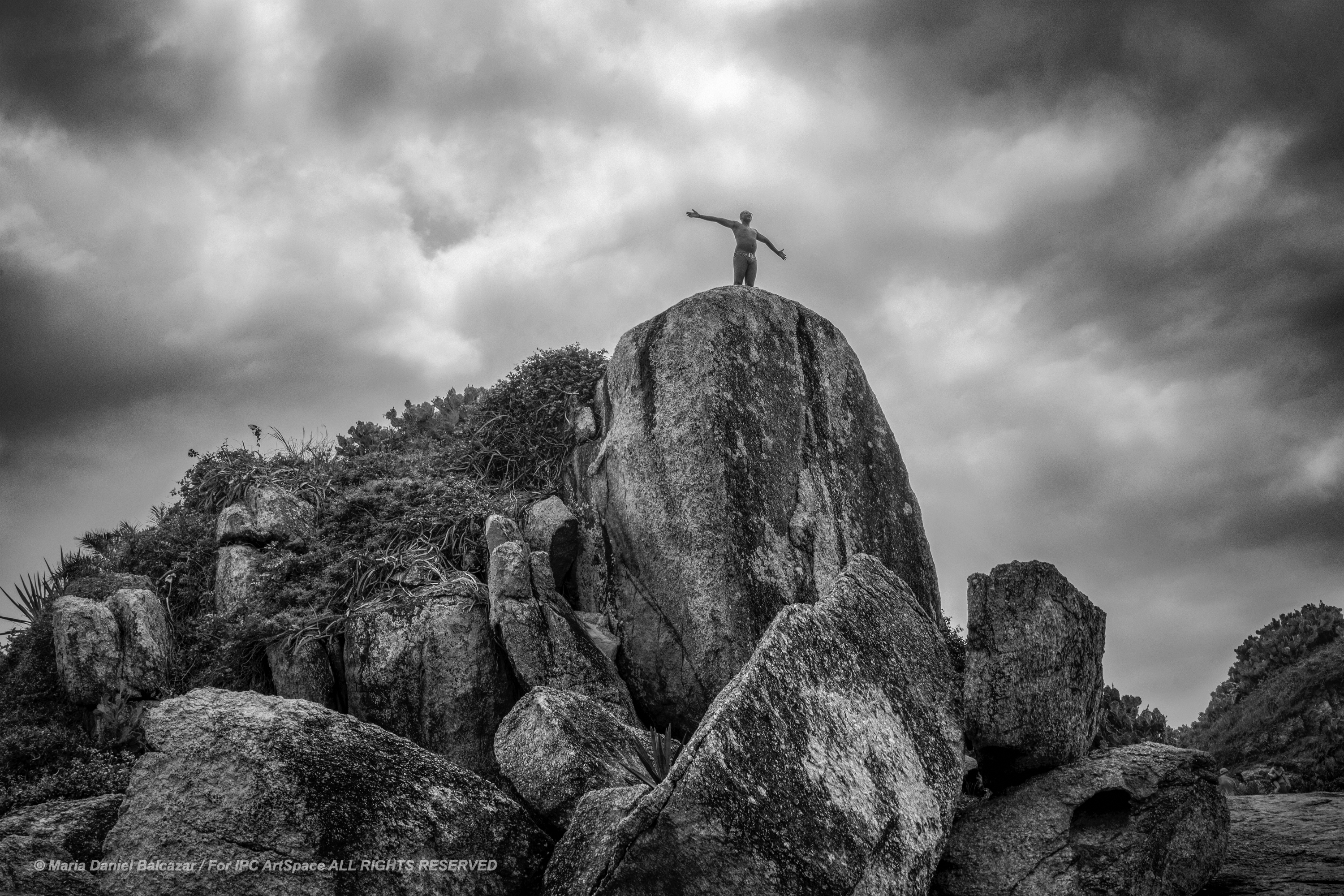 The little black angel looks tired, even a bit sad. Not at all like a Rubenesque cherub cavorting in Old Master paintings. Evening approaches. She’s been walking more than a mile in a Holy Week procession in Minas Gerais, Brazil.

Her body leans slightly to one side. Sleep is near. Fluffy, white feathered wings framing her face are no longer symmetrical. Wearing a crown fashioned from tiny flowers and a flowing white satin gown, she’s a young girl of African descent, maybe about 5 years old, dressed as an angel, captured in a vivid photograph by Maria Daniel Balcazar.

“Paint Me Little Black Angels” is the title of the photograph, alluding to a poem by Andrés Eloy Blanco of Venezuela. It belongs to Balcazar’s extraordinary series of black-and-white photographs documenting intimate, up-close moments of daily life in Brazil’s many “quilombos,” autonomous communities established several centuries ago by runaway slaves. These communities continue to honor religious customs and lore brought to Brazil from Africa during the country’s 300 years of notoriously brutal slave trade. 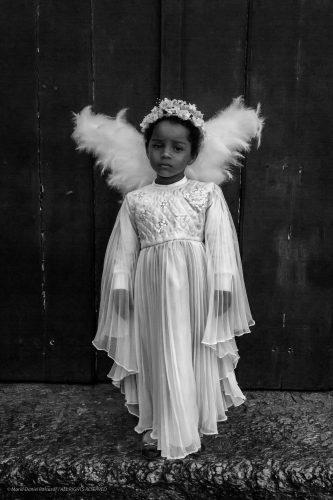 “Kilombo: A Photographic Journey Through a Mystical Universe,” which opened Dec. 3, is on view from 7 p.m.-11 p.m. Dec. 19 and 11 a.m.-5 p.m. Dec. 21 at the Iris PhotoCollective ArtSpace, adjacent to the Little Haiti Cultural Complex. As the accompanying book for this exhibit explains, “Kilombo” is the title instead of the Portuguese word “quilombo.”  That’s because the word “kilombo” belongs to the Bantu language traditionally spoken in what is now Angola. In this context, the Bantu word signifies a proud and persistent heritage of outlier resistance.

In a recent interview at IPC ArtSpace, Balcazar recalled how her mother used to read Blanco’s poem to her. She said Blanco has explained that the poem was inspired by a woman who had lost her son, who is said to have implored, “God, please paint me a little black angel. Why do you always paint white angels?” So Balcazar chose a reference to this poem for the photograph’s title.

Reflecting on the ubiquitous presence of alabaster-skinned cherubs in a Catholic country’s religious art, she thinks this is a question many black women in Brazil must ask themselves when they enter churches.

“I was at the end of my shoot that day and I saw this little girl,” she recalled. Immediately, she took the shot.

Other photos in this exhibit pay trenchant witness to Brazil’s syncretic mix of African religious traditions with Roman Catholicism, both imported long ago to the country and then subtly — or not so subtly — braided into Afro-Brazilian religions Candomble  and Umbanda.

The Biblically titled “On Earth as It Is in Heaven” illustrates Balcazar’s gift for capturing spontaneous moments that mirror the deep roots of Brazil’s syncretic culture, illuminating ways Afro-Brazilians continue to evolve after surviving the Middle Passage nightmare across the Atlantic Ocean. This photo is intense and visceral. It reveals the marriage of flesh and faith.

It shows a man dressed for swimming, standing on the precipice of a huge boulder, his body silhouetted against the sky. Looking absolutely fearless, he opens himself to the immense embrace of surrounding clouds even as they foretell violent weather. With outstretched arms, he appears as a vigorous Afro-Brazilian reimagining the famed statue of Christ the Redeemer, resplendent in long, white robes and also with outstretched arms, atop Mount Corcovado overlooking Rio de Janeiro.

“Yes, this is what you call serendipity,” said Balcazar of  “On Earth as It Is in Heaven.” “I was in the right moment. I was walking, and a storm was coming. He was just up there. I don’t know what he was doing. He’s like the black Christ, getting energy from God.”

In “Untitled,” a young woman dressed in the white gown of a Candomble  follower stands at the water’s edge in Rio de Janeiro. With clasped hands, she pays homage to the goddess of the sea and protector of fishermen. Behind her, ceaseless Atlantic waves journey toward Brazil from Africa. 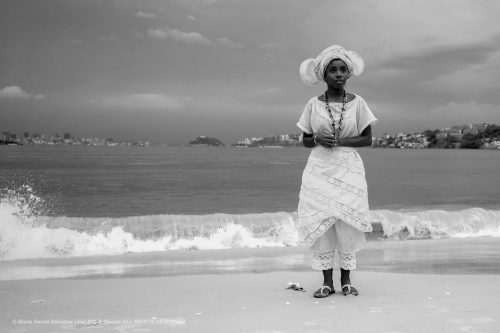 A young Candomble follower celebrates “Iemanja,” the goddess of the sea and protector of fishermen. She represents maternal love and fertility. In Umbanda, she is also associated with regional versions of the Virgin Mary. (Photo courtesy of Maria Daniel Balcazar)

This exhibit will also travel, said Balcazar. In 2020, it goes to Focus on the Story International Photo Festival in Washington, D.C.  Then it’s likely “Kilombo” will retrace its African origins, by taking part in Dak’Art Biennial of Contemporary Art in Dakar, Senegal.

Balcazar – a multilingual, Bolivian-American, fine art and documentary photographer based near Washington, D.C. – sees herself as a “citizen of the world.” Her father worked for the United Nations, so she has lived in numerous countries, including Brazil, Trinidad and Tobago, and Guyana. Although not of African descent, she “grew up with African heritage near me, but specifically Brazil,” she said. “My father lived in Africa for many years. He used to tell me how it was so strong in Brazil, how they preserved African culture.”

Many photos were taken in Brazilian cities’ “favelas,” or slums. She documented the resilience she witnessed, the determination to go about family life,  religious rituals and work despite grim circumstances. “I shot violence,” she said, “but I am not showing that and I don’t think I ever will.”

It was no spontaneous matter to gain the access that makes these photographs so compelling. Balcazar began research for this series in 2014 and started shooting the following year. “Kilombo” the book was published this year by Burn Magazine, a journal for emerging photographers founded by Magnum photographer David Alan Harvey.

As Balcazar’s mentor, Harvey helped her find local contacts who were essential for navigating the warring favelas, she said.

“They had to say if they trusted us or not, and they accepted me,” she remembers, with relief. Her soft-spoken, empathetic manner surely helped. If she was told not photograph something, she didn’t.

“It’s their territory,” she said. “You have to respect that.”

What: “Kilombo: A Photographic Journey Through a Mystical Universe,” featuring the works of Maria Daniel Balcazar and curated by Carl-Philippe Juste

Top photo: “On Earth as It Is in Heaven,” shot in Rio de Janeiro, reveals the marriage of flesh and faith. Cariocas (those born in Rio) have a close connection to the sea in this city that is squeezed between the Atlantic Ocean and the mountains. When the sea is not suitable for fishing and a storm approaches, there are those who are strengthened by the air of the storm and receive it with open arms, as the Redeemer, from above. (Photo courtesy of Maria Daniel Balcazar)