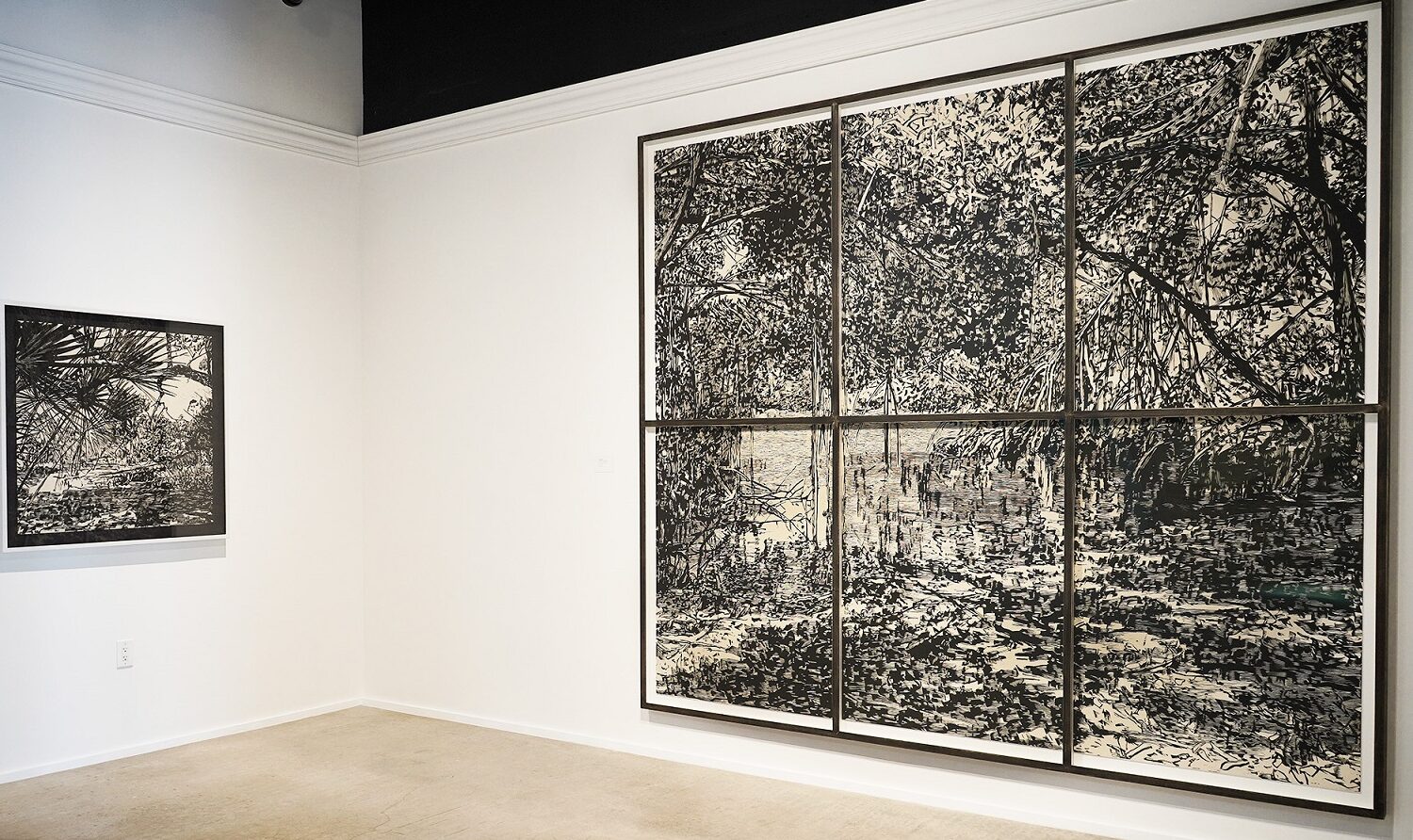 Surveying the exquisitely rendered Everglades landscapes in “Lasting Impressions: A Cessation of Existence” at LnS Gallery, viewers may notice a crucial, intentional omission in several works. The landscapes are empty of all animal life.

In some cases, the pastoral scenes in Jennifer Basile’s prints and mixed media works simply depict the beautifully desolate landscapes found amid South Florida’s famed “river of grass.” There could be fauna hiding in the reeds, or beneath the water. But Basile, an environmentalist, wants to make us consider that, because of human action, the landscape is being emptied. 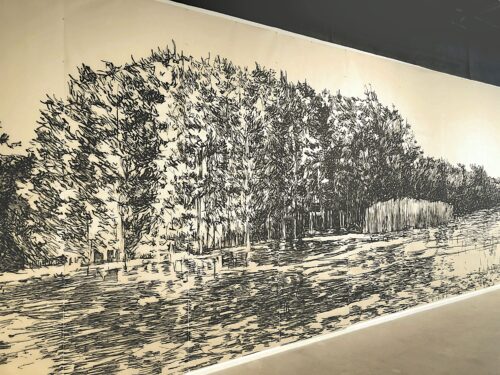 Jennifer Basile, “Cypress Dome,” 2022, is the largest work in the exhibition covering an entire wall of the gallery. (Photo courtesy of Douglas Markowitz)

“Cypress Dome,” the largest of her prints covering an entire wall of the gallery, exemplifies this idea. On the wall to the left of the black-and-white print showing the titular tree-covered island in the swamp, a silhouette of a bird can be seen, appearing as if it were cut out of the landscape. It flies above a pattern of stenciled houses, painted so lightly they’re barely visible, that represents the cookie-cutter single-family housing tracts that are slowly swallowing the ecosystem.

The artist expresses worry over the degree to which development is encroaching on the park’s borders. Her fears aren’t unfounded: On Sept. 22, Miami-Dade County Commission vote to extend the urban development boundary failed by just one vote.

“It’s sneaking up on us,” says Basile. 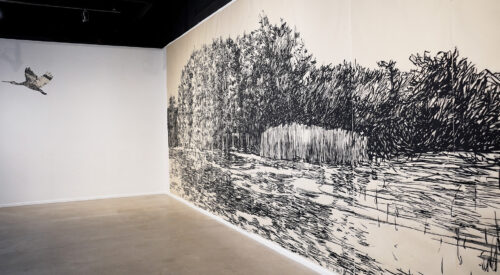 “Lasting Impressions: A Cessation of Existence,” at LnS Gallery through Nov. 19, is a solo exhibition of prints and mixed media works by Jennifer Basile. (Photo courtesy of LnS Gallery)

Her work reflects a profound anxiety over the effects of human action on the earth’s remaining natural landscapes. She keeps a “bucket list” of other national parks to visit in order to see them before they’re destroyed by climate change.

“‘We need to get to Glacier National Park, it’s the last glacier, it’s melting!’” she jokes, imitating a conversation she had with her partner. “These are the things that keep me up at night,” says Basile.

Having lived in South Florida since the early 1990s, Basile, who is also a professor at Miami-Dade College, frequently visits Everglades National Park to hike and bird watch. She wants her work to inspire a similar passion for the Everglades, letting the natural beauty depicted in her prints to speak for itself — viewing “quiet advocacy” as an alternative to the traditional tropes of environmental activism.

“I’m trying to advocate for the environment, but I’m not trying to show you all the obvious things, like the plastic bags and the thrown-out garbage,” she says. “I think we’re actually becoming, sadly, conditioned to seeing that.”

Basile’s work and its perspective is right at home at LnS Gallery. The art space in Coral Gables founded by married gallerists Luisa Lignarolo and Sergio Cernuda has championed South Florida artists since opening in 2017, holding shows for Miami-based artists such as Michael Loveland, William Osorio and the late Carlos Alfonzo.

“Our mission was to assist and represent Miami-based artists in a very professional realm, where we’re introducing a more international thought process,” says Cernuda. “We work a lot with museum curators, art historians, we love publishing, we’ve done 25 publications in five years.” 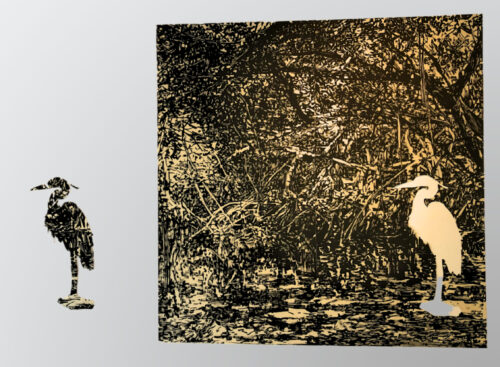 Basile was one of the first artists to join the gallery upon its launch in 2017, and her first solo show for the gallery, which presented a similar series of prints, was titled “The Power of Print: Iconic Images of the American Landscape.” Her familiarity with natural landscapes can be seen in the details of her work, as can her expertise with her chosen medium of printing.

In a series of small-scale works, for instance, she recycles the glassine, a layer of paper used during the printing process to prevent ink bleeding, creating colorful, almost psychedelic landscapes for her birds to explore in a process that marries sustainable practice with creative adaptability.

“The endless possibilities of printmaking is what motivates me,” she admits. “I’ve layered my paint, I’ve used different processes of painting, but there’s something in my brain about hard work, this idea of manual labor,” alluding to the physically demanding process of carving the wooden blocks used to make prints.

Basile began printmaking while studying art at the University of Miami. Having also grown bored with the ceramics she was studying at the time, a professor who visited her studio told her she “painted like a printmaker” and encouraged her to take a class in the subject. After making her first print she took up the discipline and never looked back.

“Just pulling the paper off the block, it’s really thrilling for me,” she says. 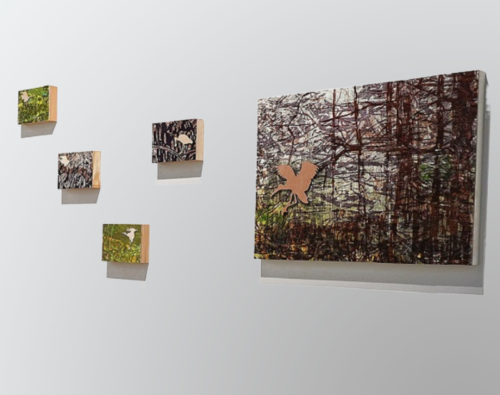 Basile’s work also owes much to the woodblock printmaking tradition of Japan, which influenced western artists such as Van Gogh. Works like “Long Pine Key,” with its saturated color palettes and slight three-dimensional effect, recall the early-20th century Japanese artist Hasui Kawase. The black and white prints such as “Cypress Dome,” which was drafted initially with a ballpoint pen before being re-drafted with an acrylic marker for a unique hand-drawn effect, resembles the thick black ink marks of traditional shodō calligraphy.

The artist admits to being enamored with Japan. Many of the works in “Lasting Impressions” are printed on washi, or traditional Japanese paper, and the artist also constructs the larger wall-size prints in grids resembling shoji screens. Yet as technically and stylistically as they are indebted to the Asian nation, they are works only a Floridian could produce, concerned with a place and plight only a Floridian would appreciate so deeply.

WHAT: Jennifer Basile: “Lasting Impressions: A Cessation of Existence”