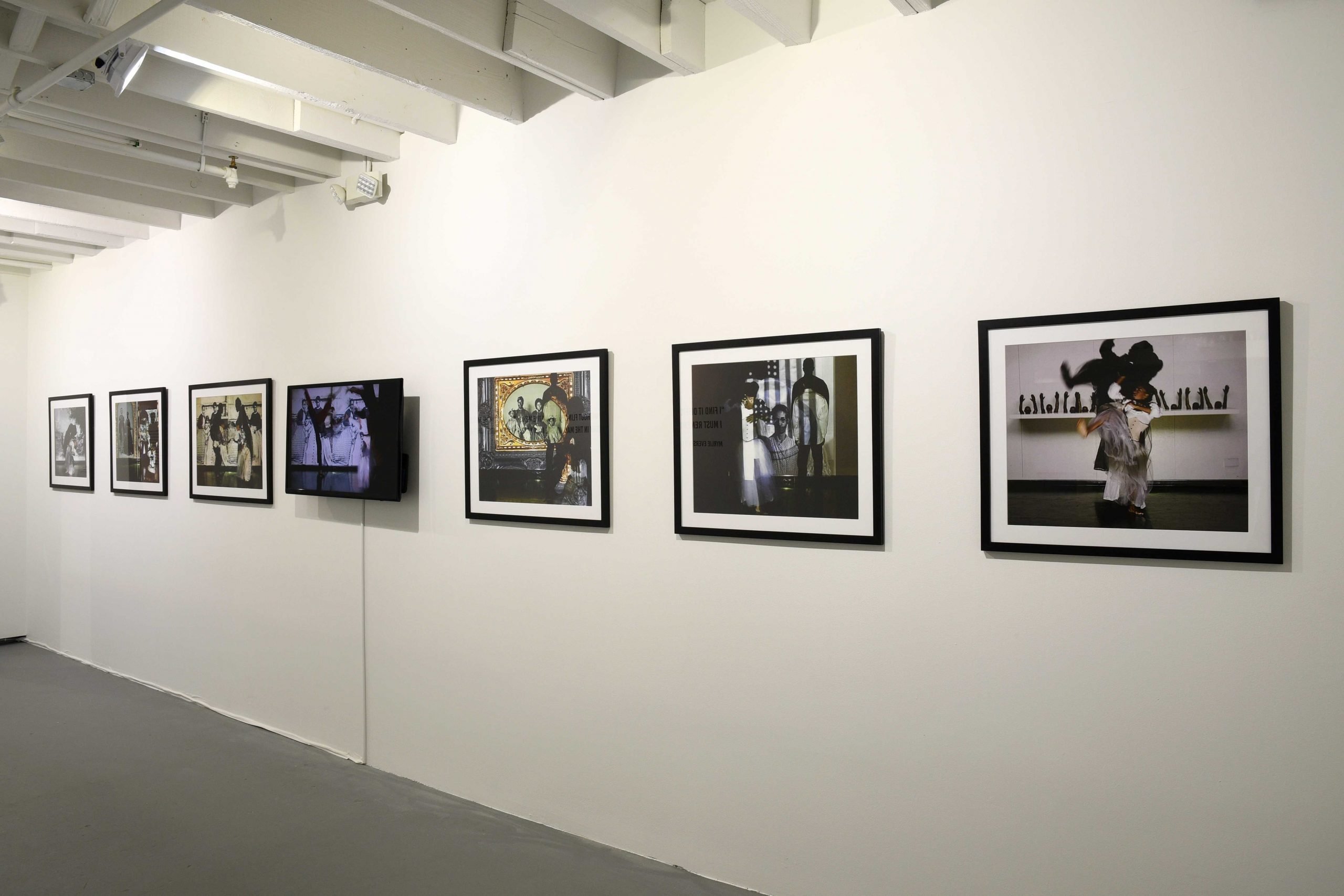 “Inter|Sectionality: Diaspora Art from the Creole City” is on display at the Moore Building in the Miami Design District. Featuring sculpture, photography, painting, video and installation art, it mirrors the city’s evolving Afro-Caribbean and Creole culture.

But before coming home, it had an impressive journey to Washington, D.C.  — one of triumph followed by uncertainty.

Rosie Gordon-Wallace, founder of the Miami-based Diaspora Vibe Cultural Arts Incubator (DVCAI), curated the exhibit, which opened in November 2019 at the Corcoran School of the Arts and Design at George Washington University. “Inter|Sectionality” brought together art by 27 artists from 18 countries, many of whom have worked or still work in Miami.

Principal funding for the Corcoran exhibit came from the Knight Foundation, with additional funds from The Andy Warhol Foundation for the Visual Arts and the Ford Foundation, says Gordon-Wallace. It was an unprecedented coup for this small nonprofit organization, founded in 1996.

But DVCAI’s fortunes changed abruptly after the global pandemic hit. “Inter|Sectionality” closed in D.C. in March 2020, and some future venues became unavailable until further notice. A few months behind schedule, “Inter|Sectionality” opened in July 2020 at the Harvey B. Gantt Center for African-American Arts and Culture in Charlotte, N.C., and remained there through Jan. 31, 2021. 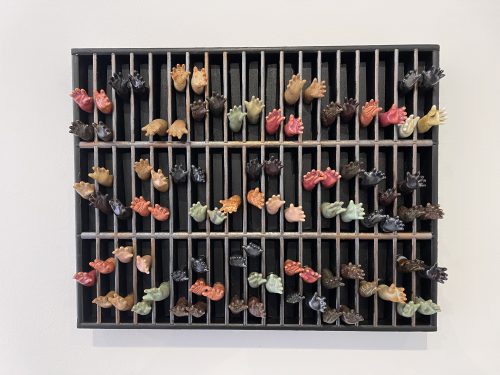 Now it’s at the Moore Building, a short walk from where DVCAI had a gallery on North Miami Avenue for more than 15 years. Craig Robins, an art collector who leads Miami Design District real estate development company, Dacra, invited her to bring the exhibit to the area, says Gordon-Wallace, because she was one of his longtime tenants.

“Rosie is one of the really important visionary personalities in Miami’s art world,” Robins says. “For us to have Rosie back with such an extraordinary show is a dream.”

In the Moore Building, “the art comes back to a multicultural community that knows this work,” says Gordon-Wallace. “DVCAI has a 20-year history of going to the Caribbean once a year, supported by the Miami-Dade County Department of Cultural Affairs. The artists in our exhibition have come from those meanderings around the Caribbean.”

Much of the art is as compelling as it is thought-provoking and timely. It underscores the legacy of Jim Crow and colonialism. Following the Jan. 6 attack on the Capitol, when a Confederate flag was carried inside, “Inter|Sectionality” is more relevant than ever.

“Yes, we are in this toxic system of racism,” says the Jamaica-born Gordon-Wallace. “But there is a new awakening.” For the first time since she has lived in this country, she adds, people in the United States are talking about systemic racism.

At the Moore, the haunting strains of Joan Baez singing “Civil War,” from her 2018 album “Whistle Down the Wind,” emanate from a magnificent installation by MacArthur fellow Deborah Willis, an artist and Black visual culture scholar who teaches at New York University Tisch School of the Arts.

“Reflections” is composed of digital inkjet prints and a video. Directed by Willis, the video shows an enthralling performance by dancers Djassi Johnson and Kevin Boseman, with choreography by Johnson. The video premiered in 2018 on Smithsonian.com.

Barefoot and wearing 19th-century garb, the dancers carve beautiful calligraphic shapes in space. They move apart, the woman seeming to pummel invisible foes, and then waltz together. Projected over their bodies in motion are historic and contemporary photographs recording Black history, including Civil War portraits of Black soldiers and domestic workers. Some photographs belong to the Smithsonian archives and Willis’ own collection.

In a nearby gallery, powerful videos by artists Guy Gabon and Minia Biabiany reiterate similar themes in differing contexts. Unfortunately, the crowded presentation of both videos prevents all but the most patient viewers to absorb their impact.

Gabon’s “Mary Prince” shows a Black woman’s feet repeatedly marking a place in the sand, as the surf threatens to wash away her footprints. This video is said to invite meditation on the slave narrative of Mary Prince, published in England in 1831.

Michael Elliot’s digital photograph, “Empire’s Pot,” with a Black arm replacing the spout on a classic British china teapot, exploits the decorative charm of a common household item with searing wit. What could be a play on “Alice in Wonderland”-type fantasy refers to the United Kingdom’s efforts to deport Caribbean immigrants who led productive lives for years in England.

In Caroline Holder’s “Insomniac’s Menagerie,” miniature pillow-shaped ceramic forms, featuring thought bubbles, hover above a standard headboard. They bear messages such as “Don’t look at me in that tone of voice!” and “Bend the branch or break it.” 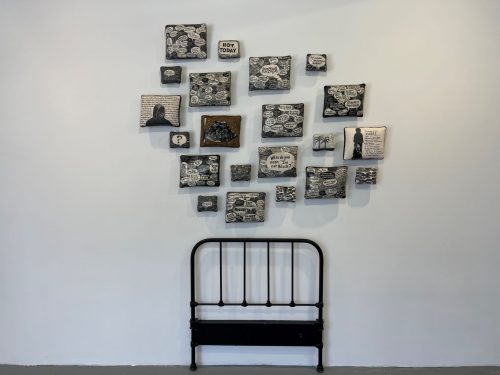 Materials evoking the body are found in works created with fibers, including those by Christopher Carter, Katrina Coombs, and Evelyn Politzer. Fibers like rope and yarn recall the vital, vulnerable infrastructure of blood vessels.

Juan Erman Gonzalez’s “El Camino” installation enlarges what appears to be a child’s drawing of a house to modest life-sized proportions. It’s built with transparent recycled fabric. This house-as-empty-shelter, perhaps evoking an immigrant experience, is frail but stands upright. Ceramic shoes are placed outside, as if to keep the colorless interior spotless and above reproach.

Asser Saint-Val’s vibrant paintings and audacious installation in the Moore’s atrium can’t be missed. “The Philosopher’s Stone” features a helium balloon radiant with fantastical tropical flora, suspended over a luxurious round bed placed in the atrium’s center.

For his activation of this space on Feb. 27, he collaborated with various artists. A performance artist’s delicate movements contrasted with a cellist playing Bach arpeggios. A professional body painter had already transformed the skin of both cellist and performance artist with surreal colors like those found in Saint-Val’s paintings.

Echoing the liberating spirit of “Inter|Sectionality,” Saint-Val says he strives to create open-ended experiences for seeing art that unleash “the essence of who we are, our true self that’s hidden.”

WHAT: “Inter|Sectionality: Diaspora Art from the Creole City”

WHEN: Through May 31. Public hours of exhibition are 11 a.m.-6 p.m. Thursdays-Saturdays and by appointment only on Sundays.