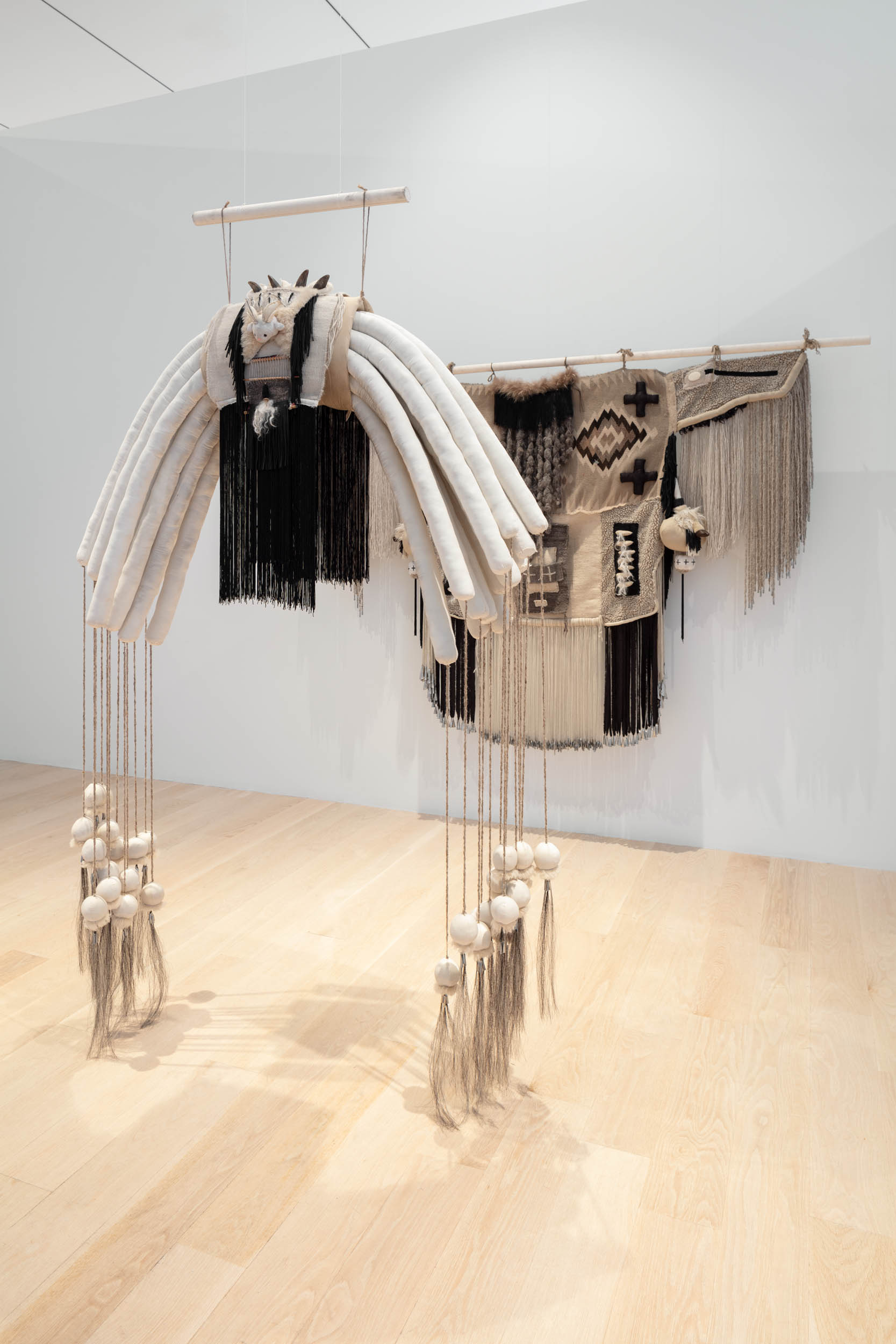 Five exhibitions at ICA Miami sharply critique the dominant cultures of North and South America. And while protest by non-White artists against societal repression isn’t new, this particular convergence is rich and varied. It also includes – alongside indictment – expressions of redemption, hope and solace.

Leading a small curatorial staff, Alex Gartenfeld, Artistic Director, and Gean Moreno, Director Art + Research Center, team up to plan and execute the exhibition program, which asks, “What does the world look like in its full range?” These current shows reveal vital segments of that inquiry.

Urgent to view before its October 6 closing is Paulo Nazareth’s exhibition “Melee,” which unleashes a veritable occupation force across the second floor. The Brazilian-born, Afro-Indigenous-Italian artist is internationally known for his months-long performative pilgrimages and for attacks against repressive politics and racist policies. These are especially relevant following Brazil’s election of right-wing President Jair Bolsonaro. In video performances, Nazareth investigates the mass “disappearances” of former protesters by digging for human remains on the grounds of a former prison camp and by lying prostrate among clusters of human skulls.

Encircling the floor’s center, an imposing red curtain encloses 49 boxed bronze portrait medals and engraved texts, commissioned by the museum. They depict largely unsung leaders of uprisings against repressive regimes – from centuries past to the present.

Another group of sculptures condemns the demeaning appropriation of indigenous Brazilian names, such as Macunaíma, Índio Rey and Asteca, for packaged food and cleaning product labels. Nazareth has embedded these consumer goods inside sinister-looking translucent resin boxes. His protest parallels comparable critique of such brands as “Redskins” and “Aunt Jemima” in the U.S.

In giving Nazareth his first U.S. solo museum exhibition, the ICA also boldly (but with a prominent disclaimer) allowed him to present a reprint of Carlos Marighella’s 1969 “Manual of the Urban Guerrilla,” a how-to urban warfare primer. Other series of Nazareth’s work alternate between somber and playful approaches. 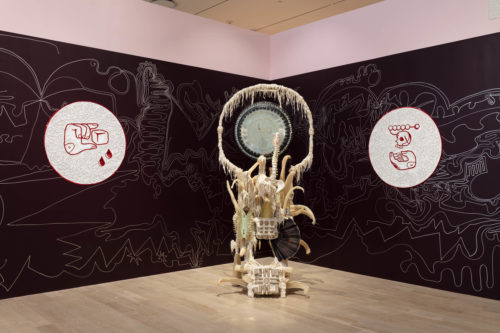 Maravilla, born in El Salvador in 1976, made the now commonplace, but equally perilous, exile journey to the U.S. as an 8-year-old. His commissioned “Tripas de Gato Mural” resulted from an interactive performance among three Latinx immigrants, who told their stories while drawing on the walls. The resulting maze design forms the background for highly charged graphic symbols, shimmeringly executed in red and white sequins.

Maravilla attributes the cancer he developed as a young man to the traumas of his fraught passage. Four “Disease Thrower” gong sculptures and a “Shrine of the Undocumented Children,” commissioned by the museum, form dramatic elements of the installation. These wildly complex assemblages – slightly over human scale – combine anatomical models of human and frog organs with antlers, loofah sponges, bones, hoses, conch shells, wool, tree roots – even plush toys. Suspending large, ornamented gongs, they become therapeutic instruments, played in ceremonial “gong baths” to which the artist attributes his own healing process and which he offers to embattled refugees in New York. video

An adjacent gallery presents hanging, enveloping sculptural forms, created by Navajo artist Eric-Paul Riege and also commissioned by ICA. Summoning another sanctuary space, the New Mexico-born artist draws on a multi-generational lineage of weaving and spiritual practice, rooted in his home region. As Moreno explained, he presents discrete objects, but views them “less as objects than as momentary freezings of enduring traditions,” like weaving. These also may be read as transitional states of birth, worship and death.

His work blends contemporary minimalist aesthetics – such as a hanging veil of yarns suspended between wooden rods – with complex combinations of vintage woven rugs, stitched, bound, tufted and draped organic forms. Some suggest harnesses; others cloaks, ceremonial regalia, wings, arms, legs, tendrils and oversize yarn spindles. One sculpture, interpreting the traditional cradleboard, holds an intricately fashioned child effigy wearing a powerfully symbolic spider cap that the artist carried up a mountain while accompanied by his parents. 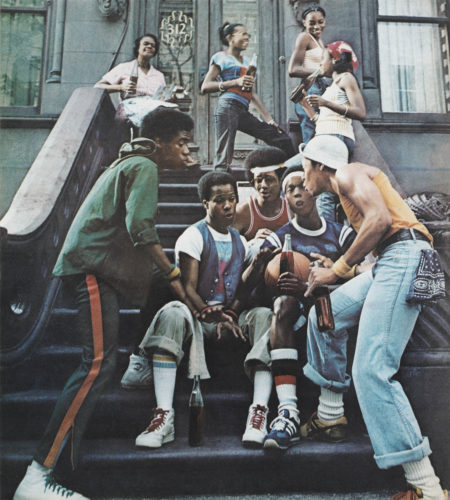 Hank Willis Thomas, born in 1976, regularly subverts the marketing messages of companies such as Nike, Coke, and Burger King by revealing how their coded imagery disguises prevalent racial subjugation, gender discrimination – even slavery. By erasing the familiar logos, Thomas offers their vintage advertising photographs as reductionist stereotypes. In one, energized young men dominate an urban stoop, while docile young women giggle behind, and an elderly woman sits passively. In “So Glad We Made It,” two well-dressed black men play backgammon; their women look on appreciatively. Thomas’s inquiry began during internships with TV and print advertisers, when he was astonished that a crew of 20 gathered around two models to create an illusion of beauty. Gradually, he recognized how branding transformed from a way to signify ownership to one of making money. His inquiry into image manipulation continues to generate powerful artwork across platforms.

Miamians prize Overtown native son, Purvis Young’s work, but he has gained international renown. This modest selection focuses on drawings from after the mid-80s when, as Moreno explains, “Young makes that leap from the early delineated, contoured drawings to free-handed, sweeping gestures. He doesn’t need to outline a body. With just with a brushstroke, he lets us know that pictorially he’s referencing a body.”

Those vibrantly drawn and painted bodies – alongside horses, bugs, syringes, oversize eyes and starry nights – distinguish the artist’s gripping response to the social disasters he and his community endured during his lifetime (1943-2010) and which he vividly chronicled on a dizzying array of  salvaged “canvases.” More than a sampler, this collection gives key insight into the artist’s fervent social critique and his artistic evolution.