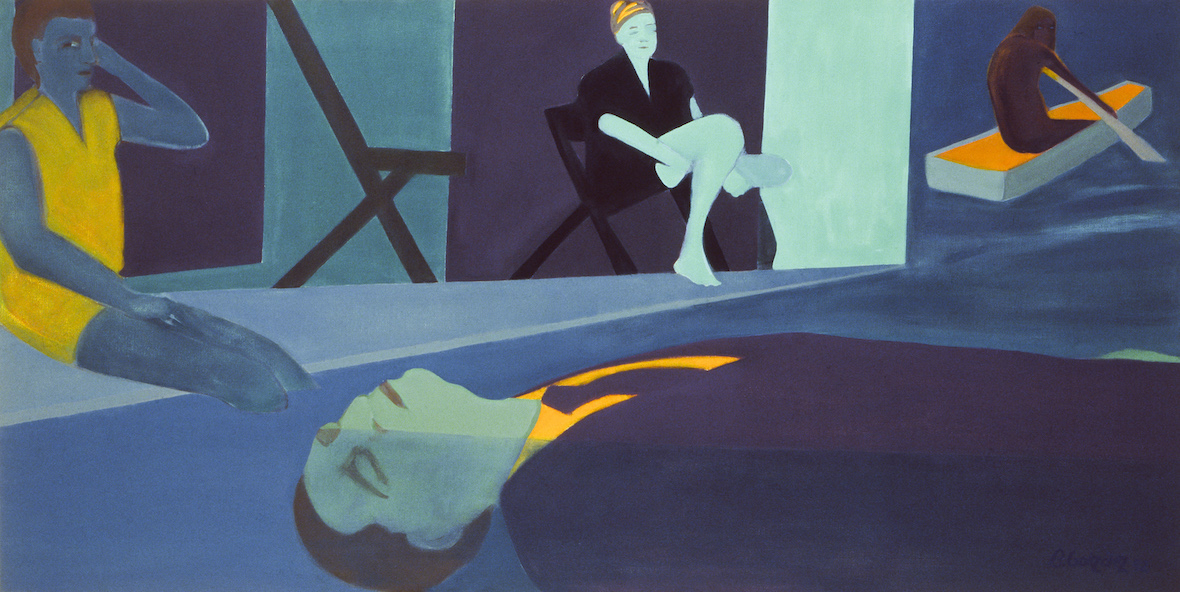 No doubt about it: In the current show at Pérez Art Museum Miami devoted to Latin American artist Beatriz González, the garish yellow, green and orange colors in her “Sun Maid” scream kitsch. They are a supersize riff on those colorful packs of Sun Maid raisins that are ubiquitous in lunchboxes. Typical of González’s art from the 1970s, the piece is like a fusion of a tacky flea-market wannabe with a prized museum object.

Leavening high-end irony with lightweight kitsch, González has painted an industrial-strength, restaurant-size tray with the cheery Sun Maid, using enamel to mimic commercial printing. Print media, including advertising and newspapers with sensational stories bearing headlines and captions such as “Murdered Woman at Lodging. Could Not Be Identified,” have long piqued the 80-year-old artist’s populist imagination.

“Sun Maid” betrays no nuanced color akin to those found in icons of European art by Vermeer and Velásquez, whom González admired when studying art history in the early 1960s in her native Colombia. The tray itself matches the one cradled by the iconic “spokeswoman” for Sun-Maid Growers, a California-based dried-fruit processor known worldwide.

The piece captures the artist’s wry sense of humor. Both spooky and cheery, González’s Sun Maid sports green teeth and green sclera, the white part of the eye. It is just one of many examples of the artist’s wit cloaked in adaptations of commercial-printing techniques. This tactic has often led González to be labeled Latin America’s pop artist, a label the artist resists.

Although González is well regarded in Latin America as an artist and teacher, it’s a coup that Miami is the first city to host this show in the United States. “Beatriz González: A Retrospective,” on view through Sept. 1, assembles more than 150 works from 1960 to the present and explores the prolific career of this outspoken artist. 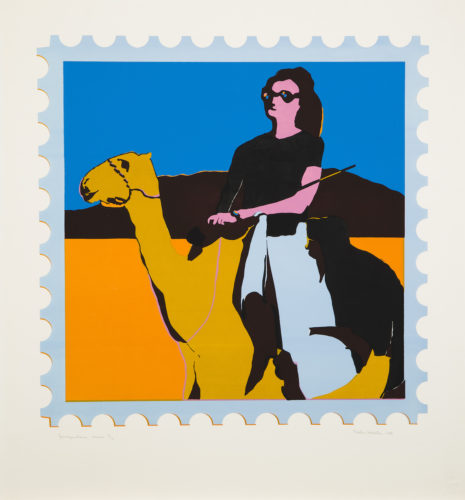 “Beatriz González: A Retrospective,” featuring such works as “Jacqueline Oasis,” is on view through Sept. 1 at the Pérez Art Museum Miami.

Still, the selection of her art expressing relentless, even cheesy ripostes on popular culture in Colombia could have been edited to convey a greater focus on González’s later, sobering art. In those more recent works, she decries the status quo in her home country, which has suffered more than 50 years of deadly civil strife.

The show is a collaboration between the Pérez Art Museum Miami and the Museum of Fine Arts, Houston. Pérez curator Tobias Ostrander and Houston curator Mari Carmen Ramírez teamed up to make the exhibit happen.

“This exhibition is really very much a part of our mission,” Ostrander says, “delving deep into artists working in modernism and contemporary art and particularly looking at Latin America.”

Ramírez adds, “Beatriz is a seminal figure, always in dialogue with her national context and centers of Western art, contesting the centrality of the U.S. and Western art history.” 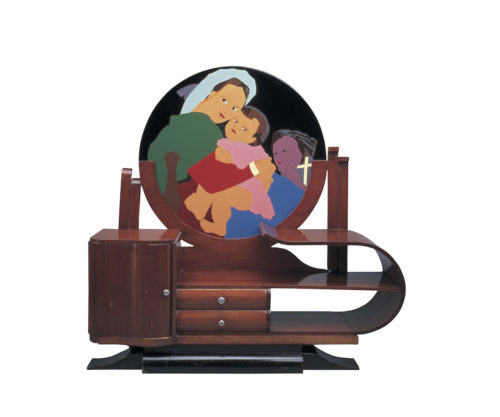 “Beatriz González: A Retrospective,” featuring such works as “Gratia Plena (Tocador),” is on view through Sept. 1 at the Pérez Art Museum Miami.

Indeed, the González retrospective underscores the Pérez Art Museum’s growing commitment to Latin American art. In 2016, the museum showcased stunning sculptural work embedded with memories of Colombia’s brutal history by another Colombian native, Doris Salcedo. Salcedo is an internationally prominent artist who studied with González before moving to New York, where she was deeply influenced by the conceptual, social sculpture of Joseph Beuys.

That Salcedo exhibit was billed as the most comprehensive survey of her work to date. Yet it was first seen at Museum of Contemporary Art, Chicago, which organized it. Now, with the González retrospective, the Pérez takes a major step forward by co-organizing the retrospective with a museum known for its focus on contemporary Latin American art and by presenting it first.

Consistent with work from the 1970s, when González modified ordinary items found in places such as street markets, is “Gratia Plena (Tocador),” or “Full of Grace (Vanity),” an Art Deco-style vanity that only seems ordinary. Replacing the vanity’s round mirror is a gaudy painting playfully echoing “Madonna della seggiola,” or “Madonna of the Chair,” by Renaissance master Raphael.

Two paintings from 1986 and 1987 bear the same title, rife with sarcasm: “Sr. Presidente, qué honor estar con usted en este momento histórico,” or “Mr. President, What an Honor To Be With You in This Historic Moment.” Both paintings refer to a brutal 1985 confrontation in Bogotá between military and guerrilla forces, known as the Palace of Justice Siege, that left at least 100 people dead. Mocking photos in the press of government leaders, González depicts a self-righteous President Belisario Betancur and his cabinet. 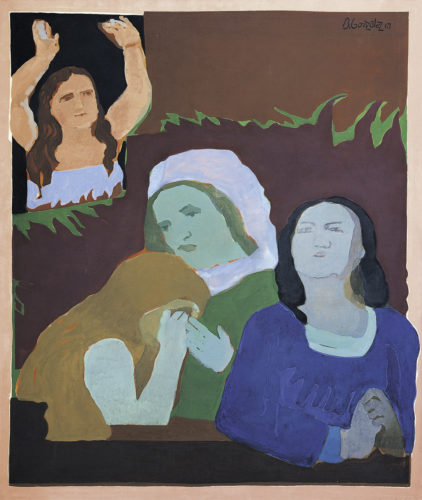 “Beatriz González: A Retrospective,” featuring such works as “Animas Benditas,” is on view through Sept. 1 at the Pérez Art Museum Miami.

That event marked a turning point in González’s art. In a film about her life and career screening at the museum, González remembers how she felt after the siege: “I thought, ‘No more laughing.’ ” Showing her childhood on her father’s farm and later in the city of Bucaramanga, about 200 miles from the capital, the film chronicles González’s career as the country slipped further into chaos. It also shows the artist sifting through boxes of newspaper clippings that recorded Colombians’ increasingly desperate daily life. The clippings provided a steady source of inspiration for her art.

A self-portrait from 1997 in which González presents herself as a weeping nude is painfully intimate. The signature strident color remains but with more subtlety. Luminous strokes of turquoise outline her body and delineate fingers covering her face in grief. Her naked body is the soft purple of a bruise that won’t heal. The work is from a late 1990s series, “Las Delicias,” based on images of grieving mothers. According to a museum label, the mothers’ sons were soldiers kidnapped at a military base in the countryside and held captive by the guerrilla group FARC. Other works from this series feature sober tones and blunt, unadorned compositions.

The show closes with a haunting reminder of González’s powerful, public witness to decades of tragedy: a partial, nearly floor-to-ceiling re-creation of “Auras anónimos,” or “Anonymous Souls,” a 2009 work she installed at Bogotá’s central cemetery. To honor thousands lost during the country’s bloody past, the installation occupies mausoleum-like structures and covers nearly 9,000 niches, emptied years ago, with hundreds of the artist’s stenciled black-and-white images of figures awkwardly carrying bodies.

The starkness of these images burns the eye. True to González’s years of reading newspapers, they derive from newsprint photographs of bodies recovered across warring regions of Colombia.

Top image: “Beatriz González: A Retrospective,” featuring such works as “La Pesca Milagrosa,” is on view through Sept. 1 at the Pérez Art Museum Miami.