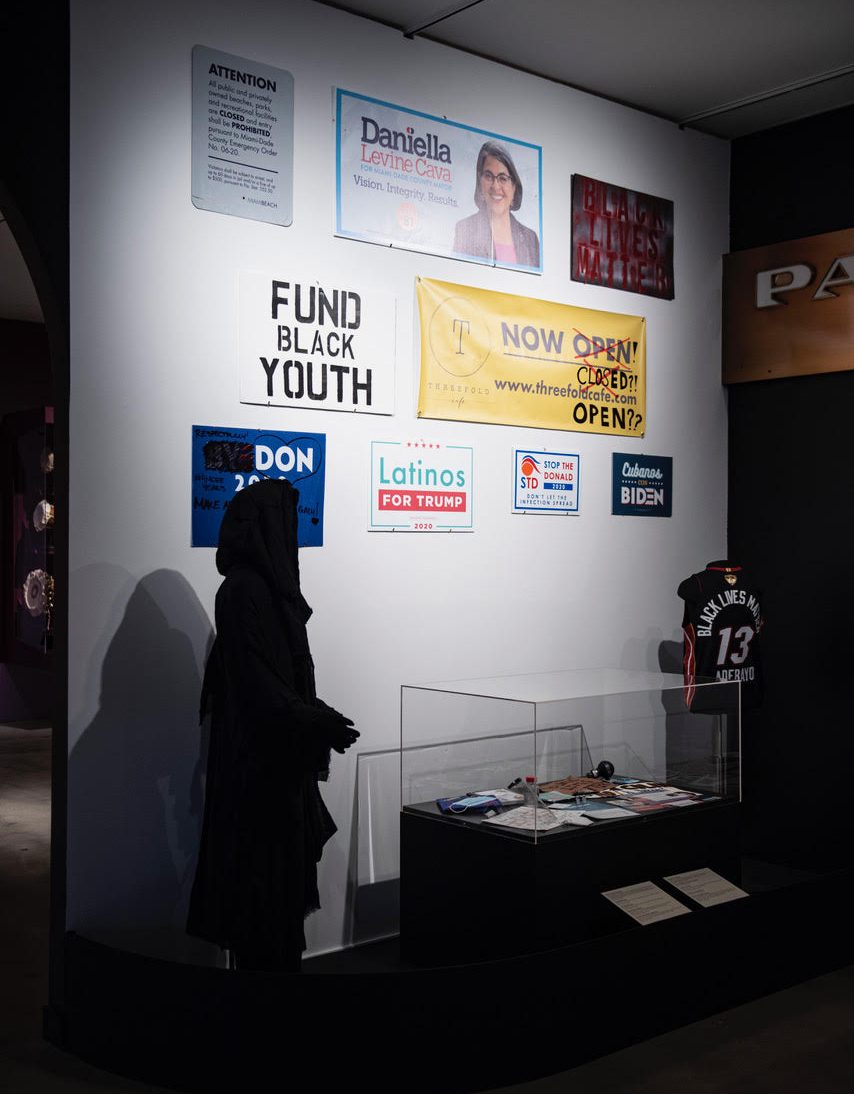 What do they have in common?

Indirectly or directly, they’re part of a project documenting the year many of us want to forget, jubilantly toasting its demise as New Year’s Day 2021 dawned.

The project is “Collecting 2020,” undertaken by HistoryMiami Museum, to record what daily life was like as South Florida endured a barrage of historic events: the global pandemic, Black Lives Matter protests, and divisive political elections.

HistoryMiami executive director Jorge Zamanillo urges the public to visit the “Collecting 2020” page on the museum’s website and contribute to this recently announced initiative. He spoke on Dec. 30, at the plaza in front of the museum, during a public call for community participation.

“You can submit anything, from a printed story to a video,” Zamanillo said. “You can request to submit objects, anything from personal protection equipment to a sign made by the kids next door to support front-line workers. Anything you think helps tell the story of COVID-19, the elections – either local or national – Black Lives Matter and racial injustice.”

Joining him in the plaza were Miami-Dade County Mayor Daniella Levine Cava, Miami Heat television host Jason Jackson and attorney Daniel Uhlfelder, who in May dressed as the Grim Reaper to walk through crowded Florida beaches and raise awareness of the COVID-19 pandemic. 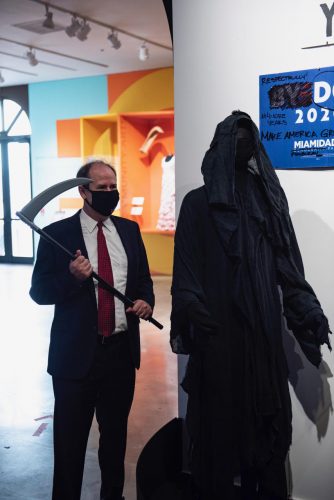 Attorney Daniel Uhlfelder stands next to the Grim Reaper costume he donated to “Collecting 2020.” (Photo courtesy of HistoryMiami Museum)

His Grim Reaper costume is already part of “Collecting 2020,” as is the Miami Heat BLM jersey worn by player Bam Adebayo when the National Basketball Association resumed its season at Disney World in July. There also are signs stating “Latinos for Trump,” “Fund Black Youth,” “Not All Heroes Wear Capes,” and “Cubanos Con Biden.”

The Heat’s Jackson expressed pride in the young people and players who stepped up to support the BLM protests. They are “one and the same for me,” he said. “In my position, the players seem so young. There were about 20 to 30 different messages that players were able to choose from, negotiated with the players and the NBA, and ‘BLM’ was by far the most-used phrase that Black, White, international players had on their back.

“As a unified association of teams and players, the message was strong and certain,” he added. “The injustice that has been part of Black life since the 1600s continues in 2020.” 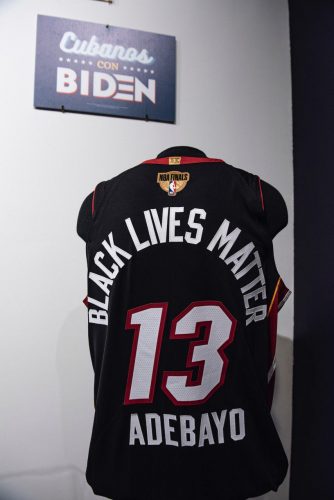 The jerseys, Jackson said, reflected a desire among the players, NBA and team owners to show that Black players “are still young Black men in America that experience this injustice. It doesn’t matter how much money you make.”

As “Collecting 2020” spotlights a year of relentless anguish, it will also demonstrate the critical value of learning from history, according to Cava, who was wearing a mask emblazoned with Rosie the Riveter, an iconic symbol of female strength and initiative.

“We learn what were the challenges and also the opportunities to solve the problems. We are moving ahead in 2021 with great hope for the vaccine, but we are going to have to use all our ingenuity to make sure that people take advantage of that vaccine and, as we recover, we do it in a way that will be equitable for everyone,” she said.

Cava also wore the Rosie the Riveter mask on Nov. 17 when she was installed as Miami-Dade’s first female mayor. Will she be donating the mask to the collection? 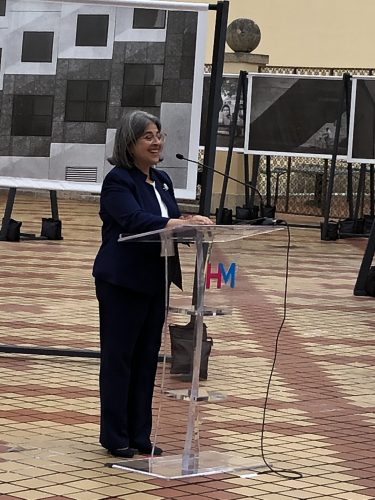 Cava smiled at the question, replying: “It’s not exactly my mask, it’s a general mask, so I’m going to hold on to it.”

However, she said she is donating items from her history-making political campaign in 2020.

In sharing his message, Uhlfelder appeared in business attire holding aloft a scythe: “As I now donate this item to the history museum of Miami, I recognize that there is not much to celebrate. “[COVID-19] cases continue to spike and hundreds of thousands of Americans have already lost their lives to the disease …

“What we can celebrate is the thousands of supporters who have joined us in this fight for truth. What I have learned from traveling the state dressed as ‘Death’ is that we are strongest when we work together and speak truthfully.”

As part of “Collecting 2020,” the public is invited to write a story, record a story, or donate items. Find more information and make your contribution at Historymiami.org/collecting2020.