Hampton House portraits provide peek into the past 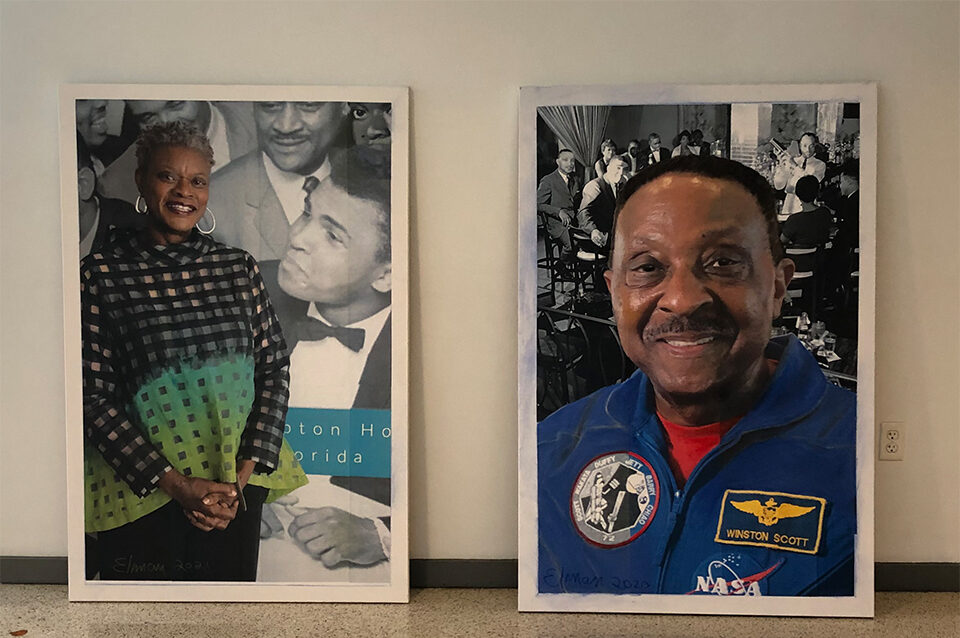 A revolving door of civil rights activists and celebrities – a who’s who of the glitterati – made Miami’s Hampton House a hub of activity and attention during the 1950s and ’60s. Situated in the Brownsville neighborhood, the motel was in the “Green Book,” offering refuge for Black travelers who needed a place to stay in segregated South Florida.

Today, it’s known as the Historic Hampton House, a museum that’s a hidden gem to many in the community. But now, there’s an opportunity to peek into the motel’s past through those who knew it best, including figures such as Enid Pinkney, crucial for her Hampton House preservation efforts; former astronaut Winston Scott; and Khalilah Ali, ex-wife of Muhammad Ali.

They, among others, are featured in a series of 40×60-inch, mixed-media portraits on view throughout Black History Month. The interactive exhibit is the project of artist Raymond Elman, who is founding editor-in-chief of Inspicio Arts, an arts publication platform sponsored by Florida International University. (Inspicio Arts has a video-sharing partnership with Artburst Miami.) 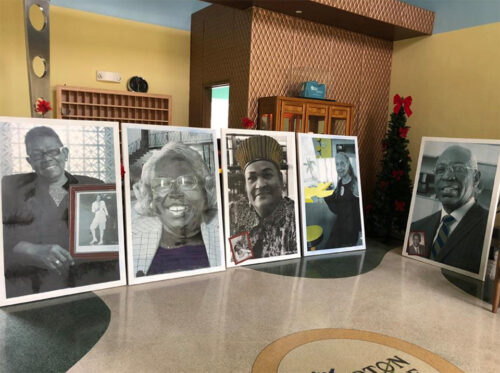 The series of portraits includes QR codes that visitors may scan to view video recordings of each person featured. (Photo/Lee Skye)

“I realized that African-Americans who grew up in Miami didn’t know [Hampton House] existed,” Elman said. “I teach at FIU and I have African-American students. I would ask them if they were aware of the Hampton House. They never heard of it. So I wanted to do whatever I could to try and shine a spotlight on it and help give it the attention it deserves.”

The interactive part of the exhibit: QR codes for each portrait.

“You can come in with your phone or your iPad, and scan the QR code and it will take you to video clips where the people in the portraits are talking about their experiences at the Hampton House. It’s really interesting,” Elman said.

The portraits will remain on-site at the museum, but visitors are encouraged to call ahead to confirm details. Anyone interested may also view them during the Historic Hampton House event, “The Greatest Weekend,” a three-day inaugural festival that starts Feb. 25, 2022. Co-presented with FIU’s Wolfsonian Public Humanities Lab, the festival will commemorate the anniversary of the Muhammad Ali (then known as Cassius Clay) and Sonny Liston boxing match in Miami Beach. Clay earned the World Heavyweight Championship title and the events of later that night at the Hampton House were eventually fictionalized and turned into a play then movie titled, “One Night in Miami.”

Elman said the mixed-media portraits are a departure from his previous artistic focus. For the first 20 years of his career, he immersed himself in abstract art, then moved on to portraiture. After moving to Miami, Elman met Pinkney, who is known for resurrecting the Hampton House after it fell into disrepair.

“She’s the one who raised millions of dollars to restore it,” Elman said. “She was able to galvanize and pull together a team that did all the things that needed to be done to make this happen.” 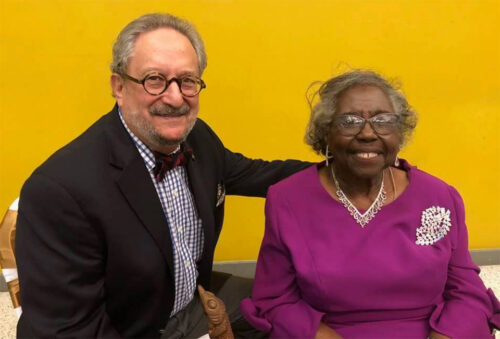 Artist Raymond Elman was inspired by the Hampton House after meeting Enid Pinkney, who is known for her efforts to preserve it. (Photo/Lee Skye)

The roster of distinguished guests from the motel’s past inspired Elman to capture the memories through the portraits and video recordings. An Ellies Award in 2018 from Oolite Arts helped finance the project.

“I realized what an extraordinary place the Hampton House was and the tons of legendary people who would either stay there or perform there during segregation,” he said. “They all came back to the Hampton House after-hours. People like Frank Sinatra used to come there because it was the coolest place to be.”

Jacqui B. Colyer, chairwoman of the Hampton House board, seconds that: It was “the social center of the South. It was the place where everybody wanted to be and to be seen.”

The Hampton House was also known as a hub for those fighting racial injustice. Martin Luther King Jr.’s famous “I Have a Dream Speech” was said to have its beginnings there.

“The manager at the time said that Dr. Martin Luther King practiced that speech in front of many of the guests because he was just testing it out to see what people thought,” said Colyer, who is among those featured in a portrait.

The exhibit, she said, offers a great opportunity to learn about the motel and highlights the determination and ingenuity of the African-American community.

“The Historic Hampton House is a treasure in this community,” Colyer said. “It’s a treasure because it speaks of a time when the African-American community was resilient, when the community figured out a way to make the best of a situation that it was stuck in.

“And that’s what I tell people all the time. ‘Green Book’ hotels were just basically making a way out of no way. And the community really worked hard to show that not only were they deserving, but they were equal, and that they should have what everyone else in America has, and that’s freedom.”

WHEN: Exhibit is ongoing, but visitors are encouraged to call for details.

COST: Museum general admission is $25 for adults, $10 for children age 12 and younger; and $15 for students with ID and seniors age 65 and older. Tickets for The Greatest Weekend may be purchased by clicking here.