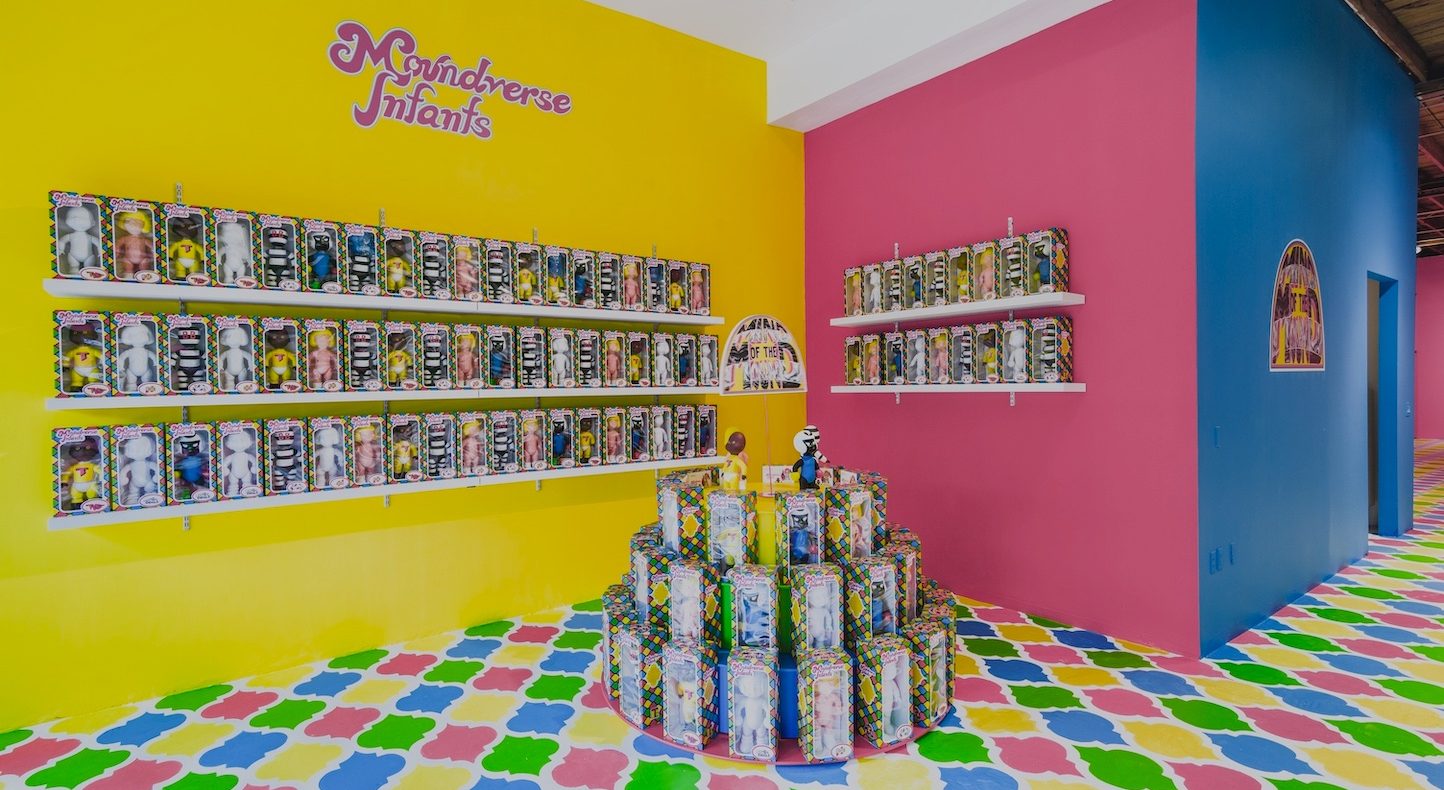 The entryway into the alternative art space now resembles a fully stocked toy store, featuring Hancock’s branded “Moundverse Infants” action figures, meticulously displayed. A brightly colored quatrefoil pattern animates the packaging and provides a floor pattern that leads back to the main gallery. A touchstone that recurs across mediums in Hancock’s work, the quatrefoil hearkens – in motif, not palette – to his grandmother’s linoleum floor, representing “home.”

“We stripped down all the markers of the brand of Locust to let Trenton really take over,” said Lorie Mertes, Locust Projects’ executive director, during a recent joint interview with Hancock.

His radical makeover can be initially disconcerting to regular museum-goers, but it is a huge draw for children, whose fascination leads them to explore the embedded questions of identity, justice, beauty, temptation, and even brutality, that impel the artist.

“Trenton’s work stopped me in my tracks,” said Mertes, about seeing Hancock’s work in the early 2000s at the Whitney Biennial, an event at the Whitney Museum of American Art in New York City, and at another major show in Houston.

Since then, his career has blossomed. This past spring, he had an enormous solo exhibition at the Massachusetts Museum of Contemporary Art in North Adams.

Whereas MASS MoCA was about sweeping views, Locust encourages intimacy. Hancock had to distill his messages, while still demonstrating the broad range of mediums he deploys, to fit Locust’s smaller footprint.

“The space helps make the decisions about what’s going to be shown,” Hancock said.

“We’re a space that gives emerging to established artists the opportunity to create ambitious new experimental work,” Mertes added. “I like to think of [it] as ‘yes’ for artists.”

The commissioned residency/exhibition wasn’t about a prescribed installation space, but rather about the freedom for something unforeseen to evolve.

“I’m the creator of my own universe, called the Moundverse, and that entails painting, drawing, printmaking, animation, film, sculpture, toy design, tapestry…” he said. “So, anything I feel has influenced me, I try my hand at it and then absorb that into the greater world of the Moundverse.”

Trenton Doyle Hancock’s work will be on exhibit at Miami’s Locust Projects through Feb. 8. (Photo courtesy of Mateo Serna Zapata)

Like many cosmologies, Hancock’s is both personal and global. As a child in Paris, Texas, he drew fantasy characters and favored horror movies and the megastars of comic books, science fiction and martial arts films over the biblical luminaries revered by his strict African-American Baptist family. But moral conundrums and the hero’s journey remain central concerns, and the plump, nerdy, oddly-costumed Torpedo Boy endures as his ever-evolving, heroic-but-flawed alter ego.

Hancock’s Moundverse is inhabited by benevolent, forest-dwelling, black-and-white-striped, plant-animal hybrids called Mounds. Extraordinarily complex organisms, they absorb the world’s negativity and protect themselves with ingenious strategies. Their natural enemies are, ironically, called Vegans, who stand in for zealots of all stripes. Other eccentric characters have evolved through Hancock’s introspection, sketching, avid toy collecting, and writing. They manifest in a multitude of forms within the Locust installation, including video, sculpture, and oversized cartoon panels.

“I always hesitate to say that I’m a political artist in the traditional sense,” Hancock said.

In college, he was grooming himself to become an editorial cartoonist, but he was turned off by the short shelf life of topical cartooning. “Politics are inescapable, but it’s reflected through the lens of the personal.”

In the main gallery at Locust, recent large-scale drawings, destined for a graphic novel, are presented opposite two prominent works from 2000 to 2001 that add a retrospective element.

“People get sucked into the wall like a vortex. It moves you along that wall and around the edges, and then the giant [Mound] thing is plopped into the middle of the room,” Hancock explained. “It’s like, ‘Well here’s the sun, and we have things orbiting around that.’ That’s kinda how that room operates.”

The Mound is a 13-foot-tall, tepee-like structure, wrapped in a boldly patterned wool pelt, and topped with a grimacing blue cartoon head. Entered through a slit, the structure offers visitors a spirited video animation, narrated by Hancock, about the vital hunting and capture of color. Along with a darker, live-action video, it represents the collaborative practice that Hancock increasingly engages to realize his extravagant ambitions. 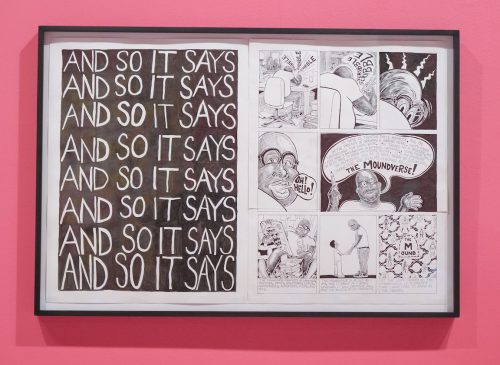 A closeup look at Trenton Doyle Hancock’s “I Made a Mound City in Miami Dade County.” (Photo courtesy of World Red Eye)

“The great thing about self-publishing is that you can make the format of your comic however you think best suits that form,” Brideau said. These range from stapled photocopies to glossy hardcovers.

“Upgrade Soul,” a graphic novel by Los Angeles writer/illustrator Ezra Claytan Daniels, exemplifies one extreme. Available as a 272-page book, this complex sci-fi story was also published on an app that allows its multiple layers to move independently.

By comparison, “Wash Day” is self-published by Jamila Rowser, a comics writer in Broward County. Modest in size and scope, it takes place over the course of just a couple of hours in the Bronx, during which a young woman takes time out to wash her hair.

“You learn a little bit of her life and how she interacts with people in her neighborhood and her roommate,” Brideau said. “And it’s all about the beauty and resilience of black women.”

What: “Trenton Doyle Hancock: I Made a Mound City in Miami Dade County”

When: On view through Feb. 8