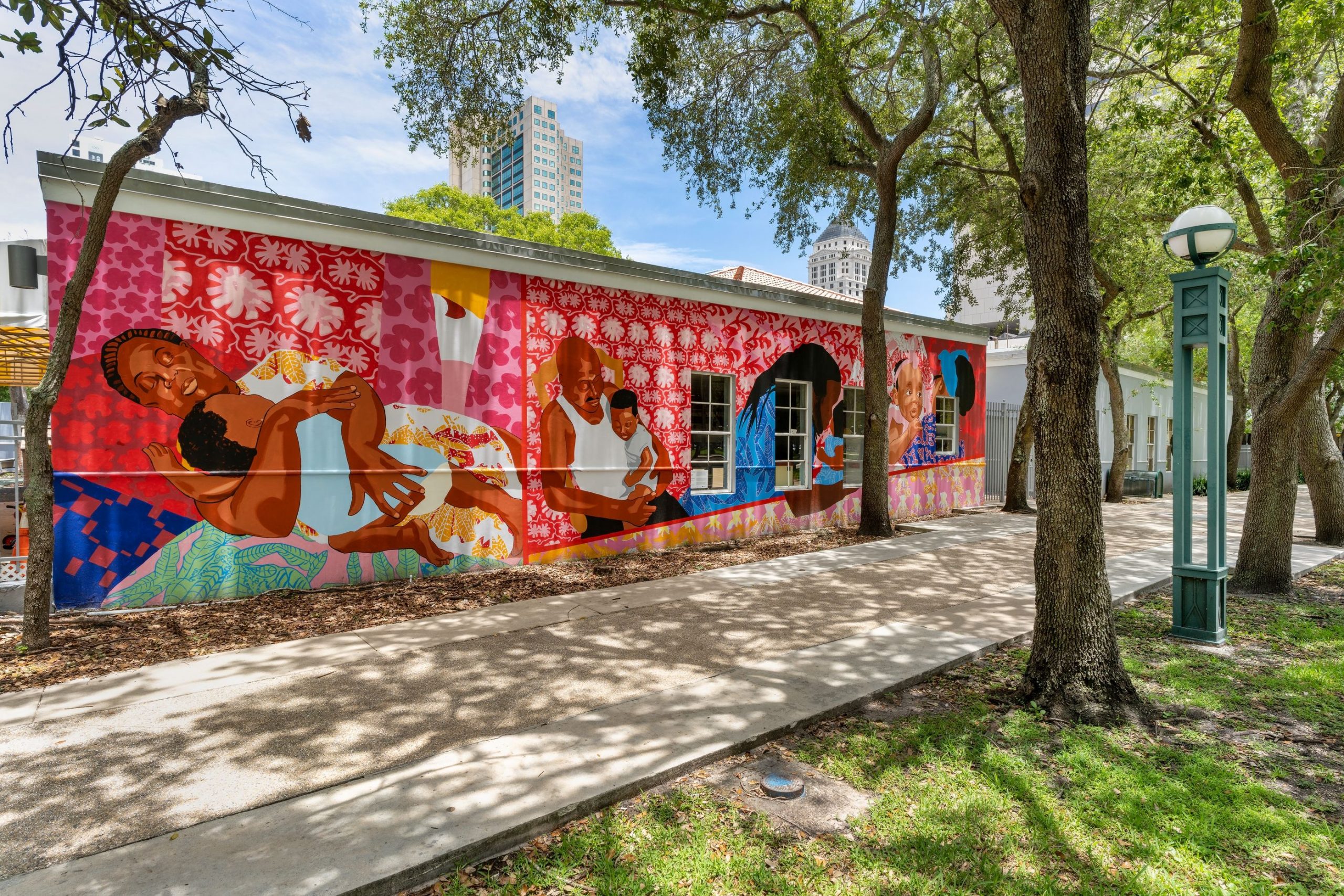 Mark Fleuridor’s “Being Held” mural covers one wall at the Carol Glassman Donaldson Childcare Center, across from the Miami-Dade Children’s Courthouse. (Photo courtesy of Zachary Balber)

The painted scenes depict the idea of being cared for, cherished. They’re tender family tableaus, all showing children of different ages cradled in the arms of someone who could be a nurturing parent, grandparent, aunt or uncle. They’re painted in bright colors, resembling a tapestry.

Entitled “Being Held,” the 52.9- by-12-foot mural from Miami artist Mark Fleuridor graces the front of the Carol Glassman Donaldson Childcare Center in downtown Miami. One of eight works commissioned by Fringe Projects, it’s meant to welcome families into the daycare center but also to serve another audience: people going in and out of the Miami-Dade Children’s Courthouse directly across the street.

“Mark’s work has that feeling of hope,” says Deborah Di Capua, executive director of Fringe Projects. “And we were thinking about the people that were going into the children’s courthouse for one reason or another and giving them this tenderness that they might, at that moment, feel a little distanced from.”

Fringe Projects’ “Public Color” outdoor exhibition, which appears throughout the downtown area and the Design District, features artists of Caribbean descent. All but one are Miami-based artists. 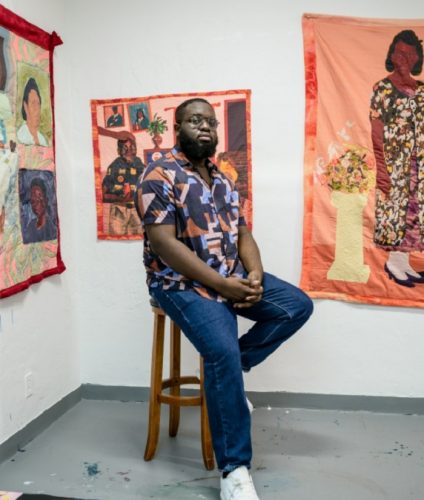 It’s the result of a partnership between Fringe Projects’ Di Capua and María Elena Ortiz, the curator at Pérez Art Museum Miami (PAMM) who leads the Caribbean Cultural Institute (CCI). Di Capua explains that Ortiz had opened a show of all contemporary Caribbean art as part of CCI: “We said, ‘Let’s do more projects with artists of Caribbean descent.'”

Fleuridor, who is Haitian-American, says his art is always based on depictions of his family. For the daycare mural, Fleuridor used sketches of “family members holding babies from images that I had taken. Then I saw the mural space and I thought it would fit perfectly together …

“I also added references to the artwork of things that remind me of Miami, food and patterns within the mural,” he adds. “There are patterns of hibiscus plants, which is the national plant of Haiti, and strawberry candies, which is something I grew up eating.”

Fleuridor also painted “Beach Day” above a storefront on East Flagler Street. Passersby can check out the mural of two children enjoying the beach, which he says was inspired by his niece and nephew. 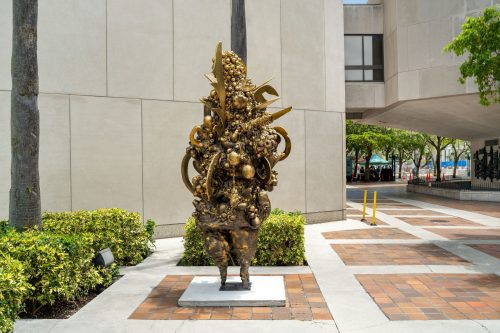 Charo Oquet’s mixed-media sculpture is meant to be a meeting point at The Plaza at Government Center in downtown Miami. (Photo courtesy of Zachary Balber)

Dominican-born, Miami-based artist Charo Oquet created her work, “Points of Joy,” at The Plaza at Government Center. The large monument, which could resemble a statue of a deity from another time, was made with hundreds of found objects then covered in gold.

“Points of Joy” is meant to be a place to pause and perhaps say, “What is that?”

“I hoped it would be a meeting point where people would gather and maybe stop and talk and think about what has been going on in these difficult times,” Oquet says.

The sculpture encompasses many of Oquet’s interests including Afro-Caribbean rituals inspired by her upbringing in the Dominican Republic.

Di Capua says “Points of Joy” is perfectly at home in its high-traffic area. “When it comes to site specificity, it just makes the projects richer,” she says. 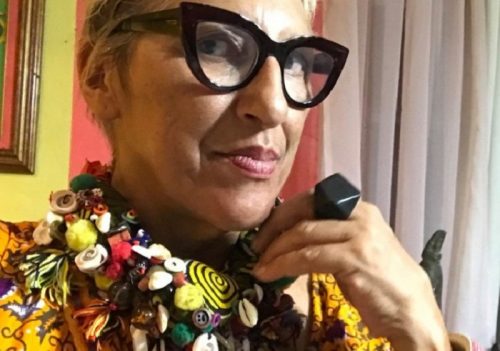 “It had to be something that appealed to everyone — the people who take the bus there, or who work in a government office, and there’s a cross-range of people, working-class people, so many who are multicultural, Hispanic, African-American … I wanted the work to speak to them,” says Dominican-born artist Charo Oquet, of her “Points of Joy” sculpture. (Photo courtesy of the artist)

Oquet took to heart the many different people who would likely cross paths with “Points of Joy.”

“It had to be something that appealed to everyone — the people who take the bus there, or who work in a government office, and there’s a cross-range of people, working-class people, so many who are multicultural, Hispanic, African-American,” she says. “There are [people] from all over the place. I felt that was my audience. I wanted the work to speak to them.” 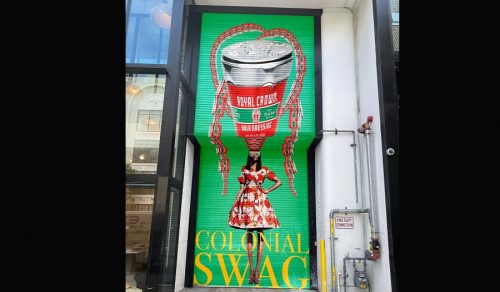 On a rolling garage door in the middle of the Miami Design District is April Bey’s “Colonial Day Sale: What Are You Gonna Do, If You Like a Woman and Your Mama No Like Am?” (Photo courtesy of Zachary Balber)

All but three of the pieces are currently installed. Morel Doucet’s digital installation, “Opia (Under the Stars, Black Girl’s Dream),” was exhibited for a short time on the side of the InterContinental Miami hotel, because of what Di Capua explains as “the transitory nature of the piece.” Another very large and intensive piece will be installed in the fall, and a site is still being scouted for a third work that’s already completed.

“There is a fluidity where some pieces have longer life spans and others are gone sooner,” Di Capua says, adding the decision for the works to not be permanent, like many public art projects, is entirely intentional.

“Permanent work becomes part of the infrastructure and you get used to it and it blends in. But when something is all of a sudden here, it has the ability to cause a bit of a surprise,” Di Capua says. “What I love about public art, and what I’ve always loved about public art, is that you can introduce it into the everyday life of people. These works of art can live in the world, like we all live, in the grid of everyday life, but still be a special experience that also gives solitude, mindfulness, and creates curiosity.” 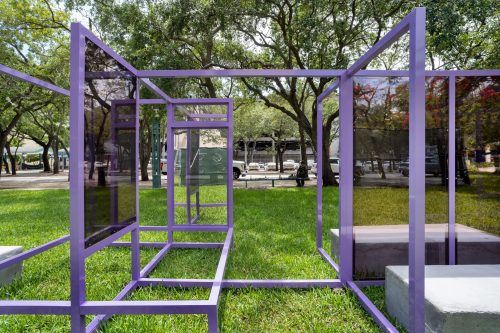 “Moving Interlude” by GeoVanna Gonzalez is at The Plaza at Government Center. (Photo courtesy of Zachary Balber)

The works in Fringe Projects’ “Public Color” include:

WHERE: Sites around downtown Miami and the Miami Design District