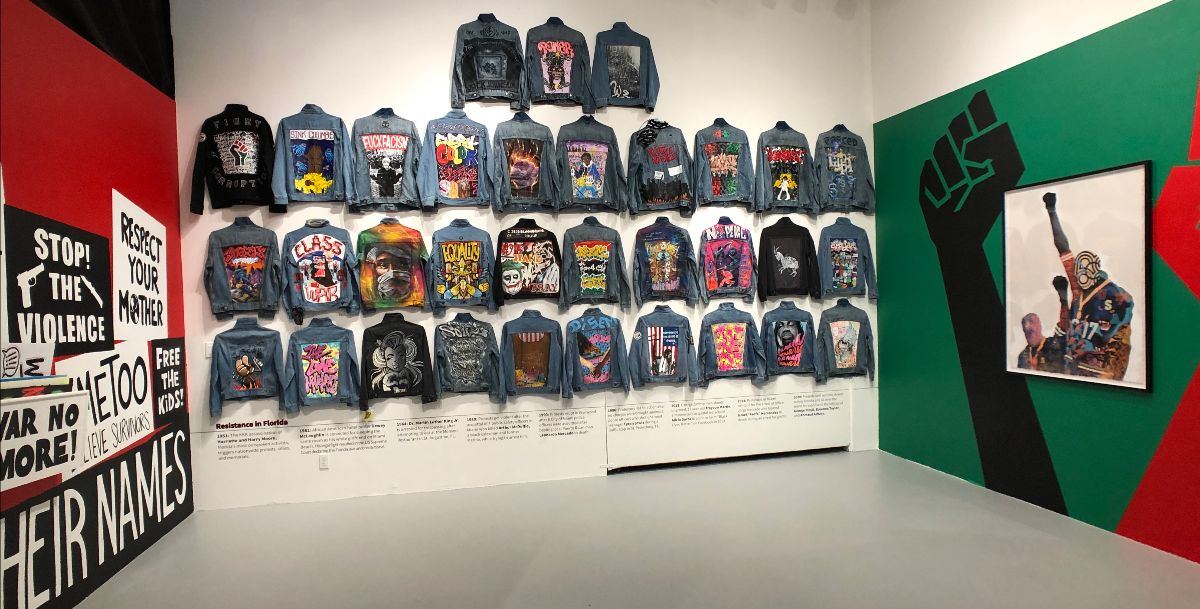 “The Fabric of America: Artists in Protest” features denim jackets bedecked in messages and symbols that take a stand and speak loudly of these troubled times. (Photo courtesy of Museum of Graffiti)

A crisis is the best time for artistic creation. So, creating is exactly what artists are doing today.

Some are creating murals, others wearables.

More than 30 South Florida graffiti artists and illustrators were invited to create protest-themed art on denim jackets for “The Fabric of America: Artists in Protest,” an exhibition launched July 18 by the Museum of Graffiti in solidarity with the Black Lives Matter movement.

“Artists typically inspire people,” said Alan Ket, museum cofounder and curator. “Artists have a way of presenting topics [and] ideas in a way that really reaches to the core of our beings and to our hearts.”

The exhibition, on view in person until Aug. 31, features denim jackets bedecked in messages and symbols that take a stand and speak loudly of these troubled times. With the momentum right now around the themes of racial inequality and police brutality – sparked by the death of George Floyd on May 25 – the museum provided this platform so artists could contribute to the national discussion, Ket said. 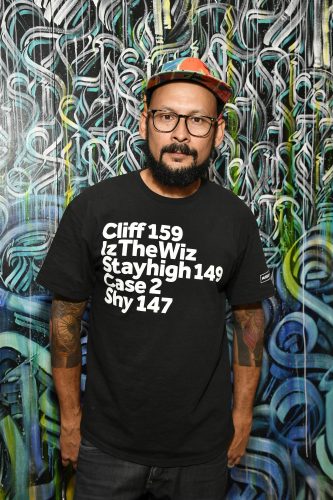 Alan Ket, museum cofounder and curator, said the exhibition includes diversity of topics and of media. (Photo courtesy of Museum of Graffiti)

“In order to bring change in society, that momentum has to grow and continue to push forward – and we wanted to be part of the change that this world needs,” he said.

For organizers and artists, the mission of the exhibition is multifaceted: “The idea of wearable art is not only to provide the artist with a platform to communicate and to share their ideas but also to be able to sell that work,” Ket added. “So that particular exhibition … allows people to own a piece of protest art to wear in public and to sort of show their position in the world as far as protesting.”

Added museum cofounder Allison Freidin: “In this particular time, it’s very clear that all of the artists that are in the show have a very similar message that they want to convey, which is their dissatisfaction with the current state of affairs and the need for equality and to eliminate the racism in our country.”

The main theme of the exhibit is protest. Some jackets make political statements (one portrays President Trump as the DC Comics character “The Joker”); others show the Black Lives Matter clenched fist symbol. One of the artists, known professionally as Cyst, painted an image of Malcolm X pulling back curtains to peer out of a window while holding a rifle.

The artists tackled a variety of hot-button issues.

“The main topic is police brutality and racial injustice, but other topics come into play in the exhibition such as equal rights, feminism, gender issues, politics and the presidency, immigration, human rights, migrant workers, capitalism, corruption, the history of resistance, even COVID,” Ket said. “It was an open platform. That’s why we have such a diversity of themes.” 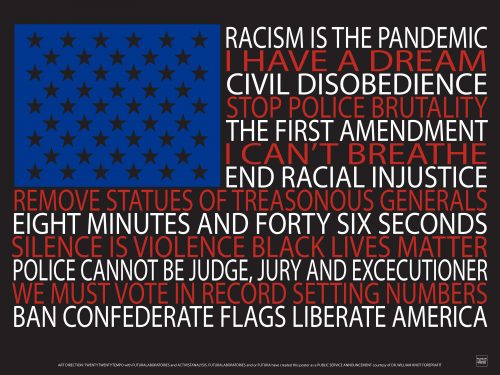 The exhibition features a poster by internationally recognized artist Futura 2000. (Photo courtesy of Museum of Graffiti)

The exhibit also embraces diverse forms of expression. There are posters by internationally recognized artists Futura 2000, Tristan Eaton and Cey Adams, as well as an audio/visual installation by Ket and fellow artist Chintz that counts down the reported time a Minneapolis police officer had his knee on George Floyd’s neck.

Rounding out the exhibition are photographs by Pablo Allison, a human rights worker and documentarian. According to the museum, Allison has been following the migrant trail from Central America to the United States since 2017, and his images captured powerful instances of protest graffiti.

A portion of the proceeds from the exhibition will be donated to Empowered Youth, an organization that aims to improve the lives of inner-city young men in the Miami area, Freidin said.

The Museum of Graffiti, situated in the Wynwood District, is enforcing safety procedures including an admission system that allows six people to enter the premises every 15 minutes.

What: “The Fabric of America: Artists in Protest”

When: On view in person until Aug. 31 and online indefinitely

Where: Museum of Graffiti, 299 NW 25th St., Miami; or useumofgraffiti.com/exhibitions-the-fabric-of-america-artists-in-protest

Cost: $16 for general admission and free for children age 13 and younger; tickets must be purchased online to avoid on-site transactions