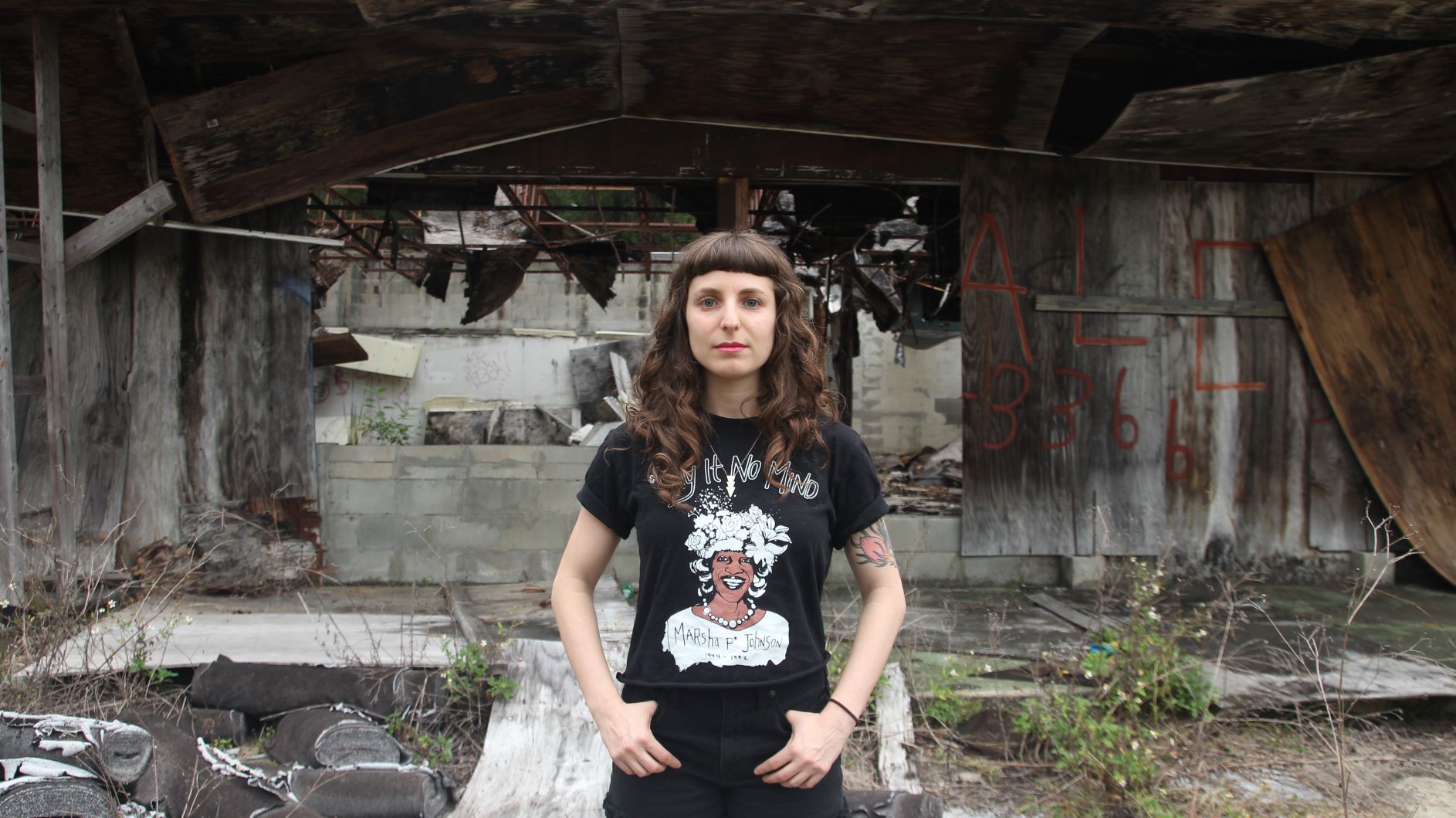 Artist and filmmaker Sasha Wortzel has an installation on display at Miami Beach’s Oolite Arts – entitled “Dreams of Unknown Islands” – that dwells on what emerges when life comes untethered from quotidian patterns.

It’s the perfect fit for 2021, after a year that taught us all about daily rhythms disrupted and lives placed on hold.

“When things are so constantly disrupted, one may feel in free fall,” says Wortzel, a South Florida native who lives in Miami Beach. “It could be that you are falling, and the world is also falling, so you would think everything is static, but it also awry. The pandemic exacerbated this sensation for most of us.”

The installation, on display through April 4, starts on the first floor of the Lincoln Road gallery. A long, glass vitrine bathed in a golden glow lines the hallway, and “A Litany for Survival” – by African-American poet Audre Lorde – coats the wall.

“For those of us who live at the shoreline

standing upon the edges of decision

“She is one of my favorite poets that I returned to at the beginning of the pandemic,” Wortzel says. 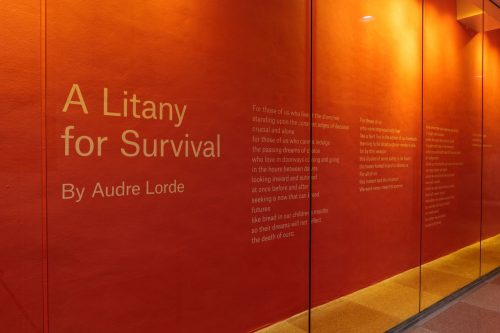 The installation features “A Litany for Survival,” by Audre Lorde, one of the artist’s favorite poets. (Photo courtesy of Pedro Wazzan)

Before the pandemic, Wortzel split her time between South Florida and Brooklyn, and her previous works have appeared at institutions such as ICA London, Manhattan’s MoMA, New York City’s New Museum and The Kitchen, and the Brooklyn Museum, as well as at film events including BAMcinématek, DOC NYC, and the Berlinale.

Wortzel’s recent works emphasize the artist’s search for a sonic, visual and cinematic language to both acknowledge those whose histories have been systematically erased and to interrogate the very processes by which that erasure occurs.

Exhibition curator Kristan Kennedy sees many points of continuity between Wortzel’s current installation and some of her other more cinematic works.

“In the case of ‘Dreams of Unknown Islands,’ we are asked to contemplate how we move and exist on this planet, as human beings in shifting landscapes and catastrophes exasperated by our existence and our impact on the environment,” Kennedy says.

Climbing the stairs to the gallery’s second floor, one enters the main part of the installation, greeted by the sounds of rushing water collaged with voices that chant and hum. 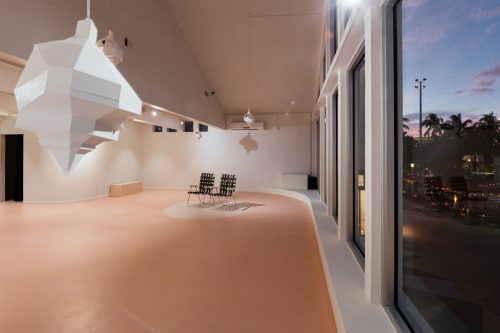 Two foldable, aluminum beach chairs sit side by side in a white circle on the floor, its web straps made with strips of black hide sourced from invasive Burmese pythons. (Photo courtesy of Pedro Wazzan)

Two small alcove rooms frame the upstairs gallery space, one facing east and the other west. Inside the western-facing alcove, a video projection captures a Gulf Coast sunset, the sun inching below the horizon, framed by vast sky and choppy waves.

Two videos are displayed on the walls of the eastern-facing alcove: One shows a sunrise at Big Cypress National Preserve. As the rising orb ignites the mist over the Everglades, it suddenly reverses direction and retraces its path before ascending again. The scene plays on loop.

The other captures a sea turtle emerging from the sea at night. The black-and-white film follows the turtle’s trek up the beach beneath a full moon as she deposits her glistening, pearl-white eggs into the sand.

Wortzel began the sea turtles film in June 2020, with the lockdown in full effect, and followed the turtle clutch until the last hatchlings emerged in early November.

The Big Cypress and turtles films create a counterpoint. One focuses on the solar cycle – so central to human patterns – looping on a disrupted path. The other gestures toward other terrestrial rhythms that persist through the disruption and grow in prominence because of it.

Set side by side, the two films symbolize human embeddedness in the natural world and suggest our enmeshment with it. 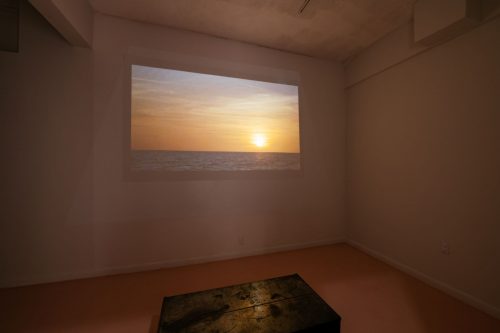 A video projection shows a Gulf Coast sunset, the sun inching below the horizon. (Photo courtesy of Pedro Wazzan)

Beyond the two alcoves, a short hallway opens onto the main gallery, painted in soft papaya.   Windows overlooking Lincoln Road’s canopy suffuse the space with indirect light. Seven angular, sharp-edged sculptures resembling seashells, each about 18 inches long, are suspended from the ceiling on wires.

The sculptures – created using 3D printing techniques – serve as channel speakers and are the source of the gallery’s soundscape.

During the lockdown, Wortzel participated in a “Kaddish constellation call,” an online gathering in which participants chant the “Mourner’s Kaddish,” a prayer recited by Jews at the death of a loved one. Wortzel mixed the chant with the sounds of underwater recordings made at the Gulf Coast shoreline during a red tide bloom.

“As someone who is Jewish, I realized didn’t need to reinvent the wheel. I could use my ancestral practices and reinvent them. This is why I turned to the ‘Mourner’s Kaddish,” Wortzel says. “I felt that as a culture we don’t make enough space for grief and we need that grieving and mourning space for our relationship with one another.”

Two foldable, aluminum beach chairs, set side by side in a white circle on the floor, are the room’s other features. The chairs’ web straps were replaced with strips of black hide sourced from invasive Burmese pythons. Entitled, “Sitting Shiva,” the display of the chairs is meant to illustrate the effects of Florida’s tourist economy and how it behaves as a force of nature on South Florida ecosystems. Burmese pythons, introduced to the Everglades by overwhelmed pet owners, are cited for the drop in numbers of South Florida species such as marsh rabbits and bobcats.

Wortzel says she intended for the exhibit to invoke contradictions: “I was thinking about the relationship between real estate speculation and storms that uproot, but at the same time Holocaust survivors moved to the area and experienced peace for the first time here. Ecological destruction and regeneration in addition to absolute joy, respite, and pride in a place experienced by the indigenous peoples, Holocaust survivors, Cubans, Haitians, and Mexicans who moved here.”

Benches have been placed strategically around the gallery, inviting visitors to spend time in the space, reflect on the gorgeously produced exhibition catalog and absorb the exhibit’s soft vibe and champagne-quality light.

In conjunction with “Dreams of Unknown Islands,” Wortzel invited six collaborators to activate seven minutes at sunset over a span of seven weeks. Viewers can tune in to @oolitearts IGTV every Friday at sunset (ET) for a moment of meditation and reflection. The series will culminate with a sunset video by Wortzel on April 4. Participating artists include: Saretta Morgan, Tourmaline, Adee Roberson, Samuel Tommie, Betty Osceola and Sacha Yanow.

“I also think about the healing and peace Sasha’s work offers, how visceral it is with glowing colors and sounds and textures emanating from the sculptures and subtle interactions with the architecture of the space,” Kennedy adds. “Sasha has used this opportunity to create a sort of in-between time where we get to reflect and store up energy and find meaning … which hopefully propels us into finding solutions and ways of being that take care of the Earth and our intersecting communities while we imagine new futures.”

COST: Admission is free but requires an appointment