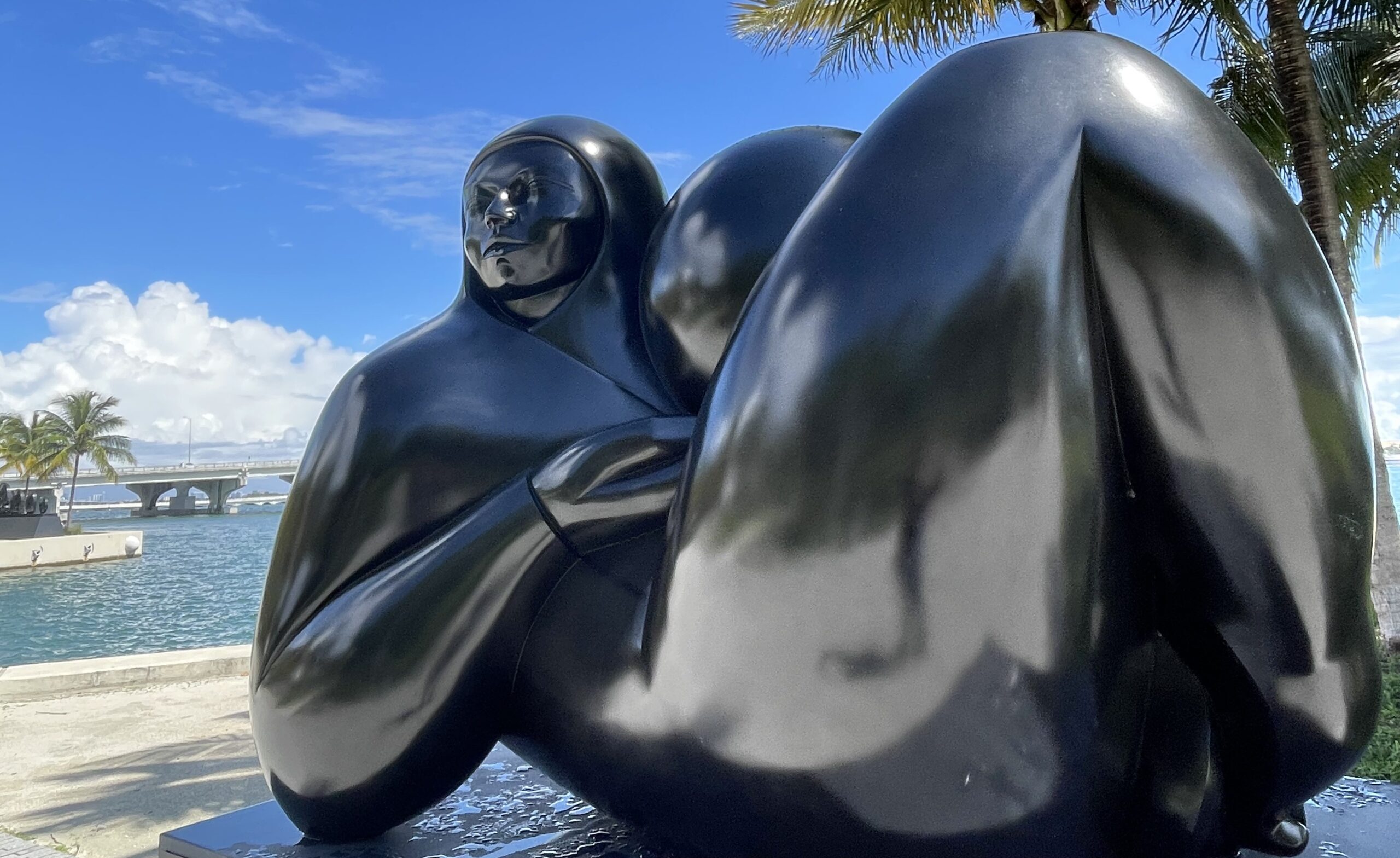 The 2,204-pound bronze sculpture “Recuerdo Profundo” by Costa Rican artist Jorge Jiménez Deredia is one of 14 works in “A Bridge of Light” in Miami’s Maurice A. Ferré Park through March 23, 2023. (Photo courtesy of Ana Maria Carrano)

When Hurricane Ian was approaching the state of Florida near the end of September 2022, the monumental works of Costa Rican sculptor Jorge Jiménez Deredia were already in Miami. They were in the midst of installation at the Maurice A. Ferré Park for the outdoor exhibition “A Bridge of Light.”

Not knowing if Miami would incur any wrath from Ian, the monumental-sized sculptures needed to be protected. Despite the size and weight, such as the “Egg-genesis” (4,188 pounds and 20 feet long), the pieces needed to be secured with large cargo straps to prevent any monumental fall.

Ian missed Miami and the 14 sculptures remained safe, making their debut on Oct. 12, where they will be on display at the waterfront until March 31, 2023. 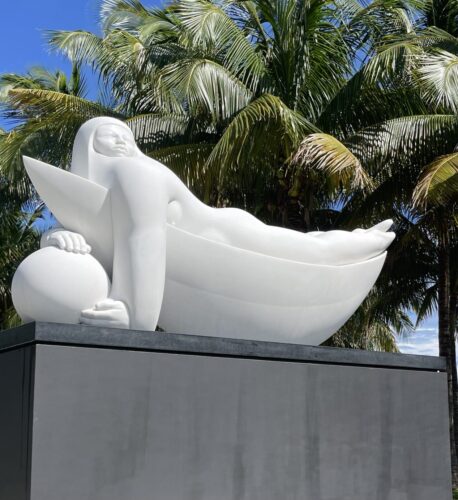 “A Bridge of Light” showcases a decade of work by Deredia, who references them as “sculptural groups” because some pieces are composed of four sculptures illustrating the transmutation of matter.  The exhibition proposes an inner journey, a reflection of oneself, an intimate path, and an encounter with the cosmos, he says.

Using similar techniques as the ancient Greek and Roman sculptors – by hand and without machines – each piece takes eight months to a year to be produced. Sizes vary from 6.5- to 30- feet long and weigh between 880 and 13,000 pounds. All are made at the artist’s workshop in Italy, located near the Carrara quarries. There, 34 employees assist, and the materials are mined from four nearby foundries.

Some sculptures are made of dark, polished bronze. Their curved forms reflect the sky, the water of Biscayne Bay or the silhouette of the person who is looking at them. Their shape seems to defy gravity. Other works are white and solid, hand-carved from the marble of Carrara. 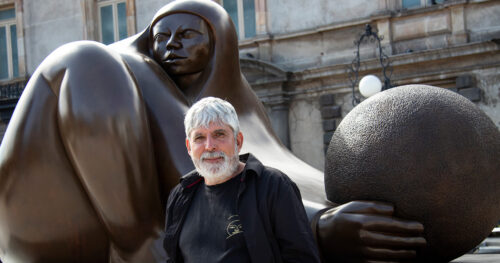 The sculptures compose a symbolic “description of the transmutation of matter” to be a bridge between the artist and the viewer. “I am convinced that in life’s journey, we participate in the great cosmic process of life and the universe. We help the universe fulfill its destiny with our existence,” explains Deredia. “In my sculptures, I try to take a snapshot of that spiritual baggage, that deep, cosmic history that we all have.”

He reveals that this is the idea of  “A Bridge of Light” —”to go inside people’s spirituality and offer the opportunity to have communication on a deep level,” he says.

The exhibition’s location in the Maurice A. Ferré Park, next to the Pérez Art Museum Miami, and facing Biscayne Bay, also offers different associations of the sculptures with the city. 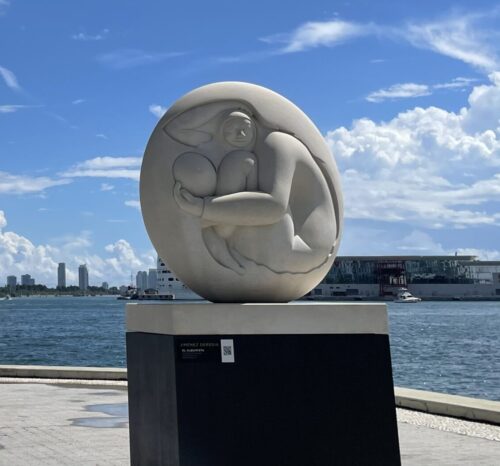 Miguel Ferro, artistic director of Bayfront Park Management Trust, discusses the connection between the landscape and sculptures. “Behind them is the arena (formerly known as American Airlines Arena) and the Freedom Tower . . . the first canal entrance to the U.S. mainland and the other side is the (MacArthur) Causeway.” These are symbols of entry, connection, and settlement to the city.

Bayfront Park Management Trust is one of the presenting organizations of the exhibition along with the City of Miami and the American Museum of the Cuban Diaspora.

Ferro says it was fascinating to watch the artist as he curated the exhibition, defining where to place each sculpture in balance with the landscape’s background. “It was magical to observe how the sculptures would harmonize within the space.”

Born in Heredia, Costa Rica, on Oct. 4, 1954, Deredia moved to Italy in 1976 when he received a scholarship to study at the Academy of Fine Arts in Carrara. He opened his studio there, worked as a sculptor and attended architecture classes at the University of Florence.

His work became known for his spiritual quest. In 1999, he was contacted by the Vatican in Rome, and after talking to Pope John Paul II, he produced the first monumental work by a Latin American artist to be placed in St. Peter’s Basilica, a 17.5-foot-tall statue of St. Marcellino Champagnat,  which is housed in one of the niches built by Michelangelo. However, when Deredia explains the roots of his spiritual journey, he doesn’t connect his art to Catholicism. He instead refers to his quest in a broader symbolism: “the transmutation of the matter.”

The artist recalls how a text written by art critic Pierre Restany in 1985 was key to understanding his work more as a transformational process. The French critic described Deredia’s work as “spiritual itineraries” rather than finished sculptures. Grasping the meaning of his work through the critic’s voice marked a moment of “spiritual revelation and cosmic illumination,” Deredia says.

Only a month later, he changed his last name from Jiménez Martínez to Jiménez Deredia (as the combination of the words “de Heredia/from Heredia,” his hometown). The moment also marked the beginning of the creation of the “Génesis” series, a group of four sculptures representing the mutation of matter.

Deredia’s “spiritual itineraries” can go from abstract to figurative. The essence is the symbolism.

“I invented the theory of transmutative symbolism,” Deredia explains. “Symbols help us to understand that dark part that lives inside us. Symbols are effective in helping us understand existence because they not only show us obvious things, they also show us things that are hidden.”

WHAT: “A Bridge of Light” by Costa Rican artist Jorge Jiménez Deredia