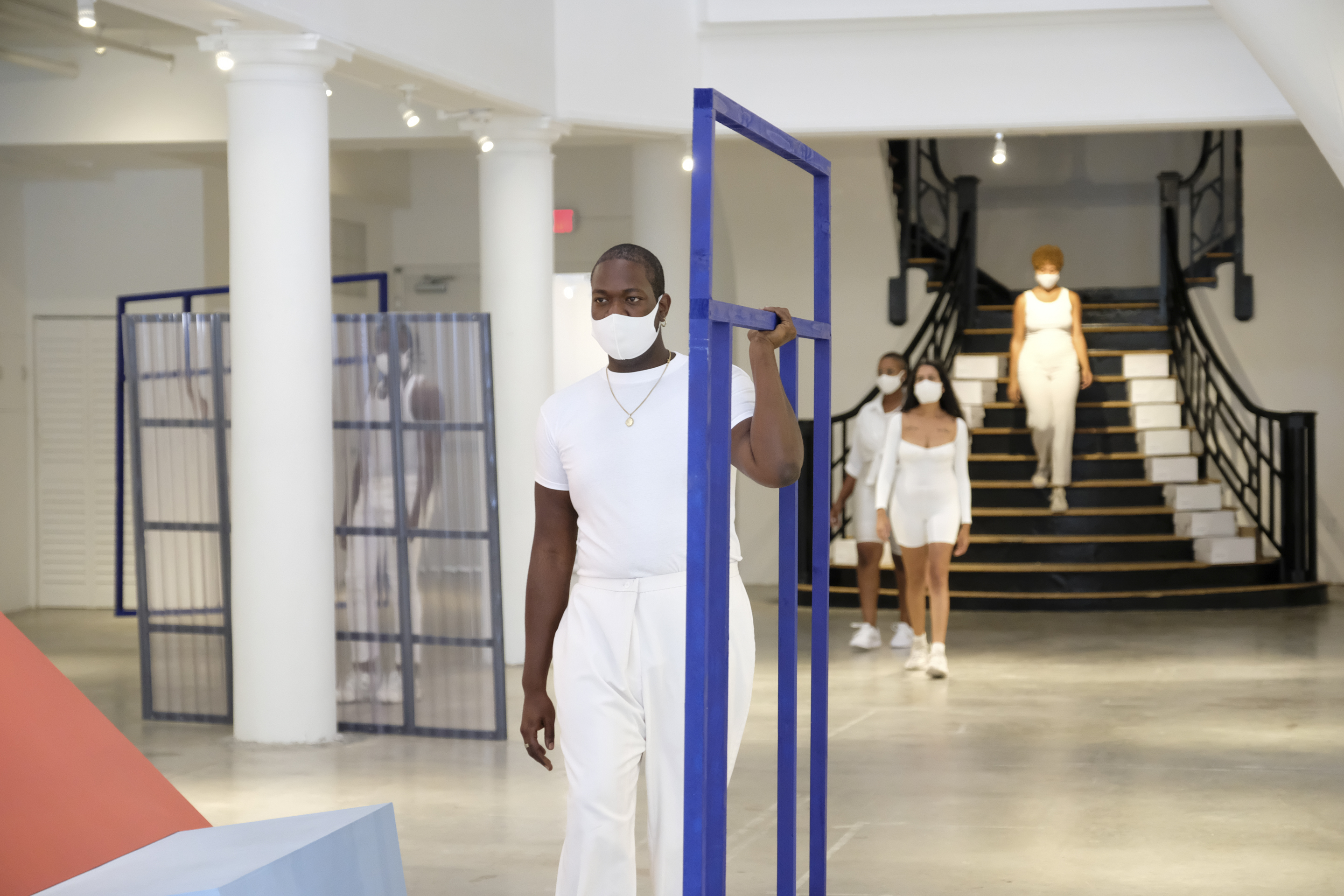 On Oct. 17, Commissioner collectors and alumni gathered at the Design District’s historic Moore Elastika Building for “When we open every window,” a performance, installation and artwork reveal designed by GeoVanna Gonzalez. (Photo courtesy of Andrea Lorena)

What does it take to be an art collector? One imagines well-heeled patrons swooping through galleries and art fairs, dropping big bucks on A-list trophy pieces created by celebrity artists. But how do “regular” folks – interested in acquiring art, yet intimidated by the hype and price tags – get involved?

Enter the subscription program Commissioner, an alternative patronage model that is beginning its third season of operation. It’s the brainchild of Miamians Dejha Carrington, a communications strategist for the National YoungArts Foundation, and Rebekah Monson, co-founder and COO of WhereBy.Us, a platform that helps build media businesses.

Commissioner offers a down-to-earth membership approach for people primarily attracted to learning about the art-making process and supporting the local arts ecosystem – while starting their collecting journey.

“Why would we go on [the website] Artsy and buy something from some guy in Australia or Germany or China or New York or L.A., when there’s such an incredible community here that’s your neighbor?” said Justin Clarke, a Commissioner alumnus.

Its platform harnesses the power of cooperation and pooling resources to directly commission original artwork – locally. With a roster of 153 current members and alumni, they’ve commissioned more than 400 works by some of Miami’s most talented artists – principally for young collectors.

An annual membership of $1,500 (or $500 quarterly) entitles 40 “Collectors” to a series of exclusive cultural programming and four limited-edition artworks, specifically commissioned by the curatorial team. Ten third-season Collector memberships remain on offer.

“We look for rigor in the artists’ practice. We look at what they’ve done and what they want to do, and always we want to see which artists we are very excited about,” said Carrington during a Zoom call. The curatorial team seek diversity in medium, identity and perspective – and consider an artists’ ability to create an edition of 40 pieces (plus artist proofs).

Commissioner isn’t trying to undermine the gallery system. In fact, Primary, a Little River gallery founded by Typoe Gran, Books Bischof and Cristina Gonzalez in 2007, is a curatorial partner in selecting Commissioner’s artist roster and hosts many of its events. Gran was the first artist chosen to create artwork for Commissioner’s inaugural Collector members. 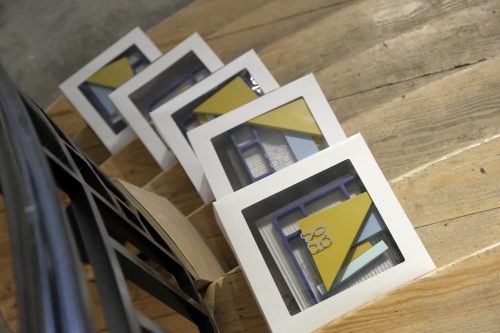 GeoVanna Gonzalez created “When we open every window” as a boxed set of miniature sculptural elements that correspond to the large installation and performance she staged. (Photo courtesy of Andrea Lorena)

The pooled resources generate a financial benefit, while prioritizing relationships with the artists over the works themselves. It’s not a buyers’ club.

“The intention is to make sure that you’re connecting with the person before the object and understanding the process,” Carrington said. “We wanted the combination of being able to commission new work and to keep the group of collectors and members engaged through a program that would be happening very regularly. It’s this idea of not only figuring out the economics but also figuring out how to build community and keep the interaction both between the members and with the artists.”

The unveiling and delivery of the artworks is organized as a celebratory event – a reveal – open to the Collector group and a set of Patron-level participants. The artist presents the work – which the collectors see for the first time – and provides insight into the ideas, techniques and materials that underlie the collage, digital media, photograph or sculpture that was created. This dynamic, explained Carrington, “puts the artist in front of the object.”

This was exemplified in the reveal for artist A.G., at Primary on Sept. 25, 2019. As Clarke recalled, “This reveal was particularly interesting because the artist, A.G., has a real flair for theatrics. Everything was dramatic and theatrical in how he presented the piece.”

For her commissioned work, Johanne Rahaman created a set of diptychs, consisting of one photograph depicting life in her native Trinidad, paired with one from her series documenting Black communities in Florida. Titled, “You Can Never Go Home,” they encompass a wide gamut of moods, activities and personalities. Her reveal featured a photography workshop at The Center for Subtropical Affairs, during which participants used the lush locale – and each other – to create a story of the environment and the creative community they’re generating.

Commissioner also offers special program access during Art Week and regularly organizes studio tours, including at Fountainhead Residency, co-founded by Dan and Kathryn Mikesell. These are supplemented by visits to private homes, where members see how seasoned collectors research, select and live with their treasures. The Commissioner website profiles its artists through non-jargony text and a short, but cogent, video. 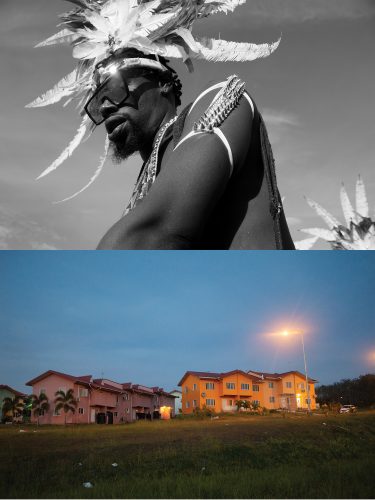 Johanne Rahaman created a series of 10 diptychs juxtaposing images of carnival in Miami, Goombay in Key West, and life in Trinidad. Titled, “You Can Never Go Home” (2018-2019), her photographs are windows into everyday moments that highlight entrepreneurship, beauty, sensuality, aging, mortality, youth and resilience. (Photo courtesy of the artist)

Members are encouraged to collect on their own, recruit friends and generate a ripple effect. Clarke ran with this idea, creating a monthlong pop-up gallery downtown during Art Week in 2019. “Life in Every Breath” featured the photography of his friend, Enoch Contreras.

“I really wanted to give him a platform to show the world his eye,” Clarke said. “He’s trying to tell the stories of the indigenous peoples of Bolivia and why this mountain of ice is sacred to them, and how global warming is affecting them and the mountain.”

Clarke and Contreras also published a coffee table book, which sold out.

Inevitably, the pandemic disrupted Commissioner’s program, which shifted resources from summer gatherings to commissioning a fifth artwork – a multicolor resin sculpture by Gavin Perry – and adding other special projects, such as virtual art-making workshops. Season One and Two members were allowed to renew.

During Season Three, GeoVanna Gonzalez’s Oct. 17 artwork reveal was unique and COVID-safe. The young and highly accomplished artist took her socially based practice into the Moore Elastika Building in the Miami Design District, where she orchestrated three performances in which her collaborators – all shared householders – gracefully assembled and re-assembled a set of sculptural “props” for a choreographed dance. This was accompanied by music and Gonzalez reading her poem, “When we open every window.” Inspired by the whirl of activity in and around her great-grandmother’s Los Angeles home, Gonzalez’s abstract sculptural forms evoked the furniture, open windows, steps and curb where friends and family hung out.

Each taking home a boxed edition of miniaturized forms that the artist team fabricated and painted, the Collectors were encouraged to re-invent – on tabletop scale – the physical and emotional exchanges they witnessed during the reveal. Several days later, while celebrating her just-announced Ellies Award from Oolite Arts, Gonzalez said, “Performers told me that people in the audience were tearing up from seeing the performance, so it really seems to have touched people in a particular way.”

Safety-enhanced studio, gallery and private collection tours are scheduled for November and beyond. For more information, visit Commissioner.us.