Collector Jorge M. Pérez on his most recent art obsession and the exhibit at El Espacio 23 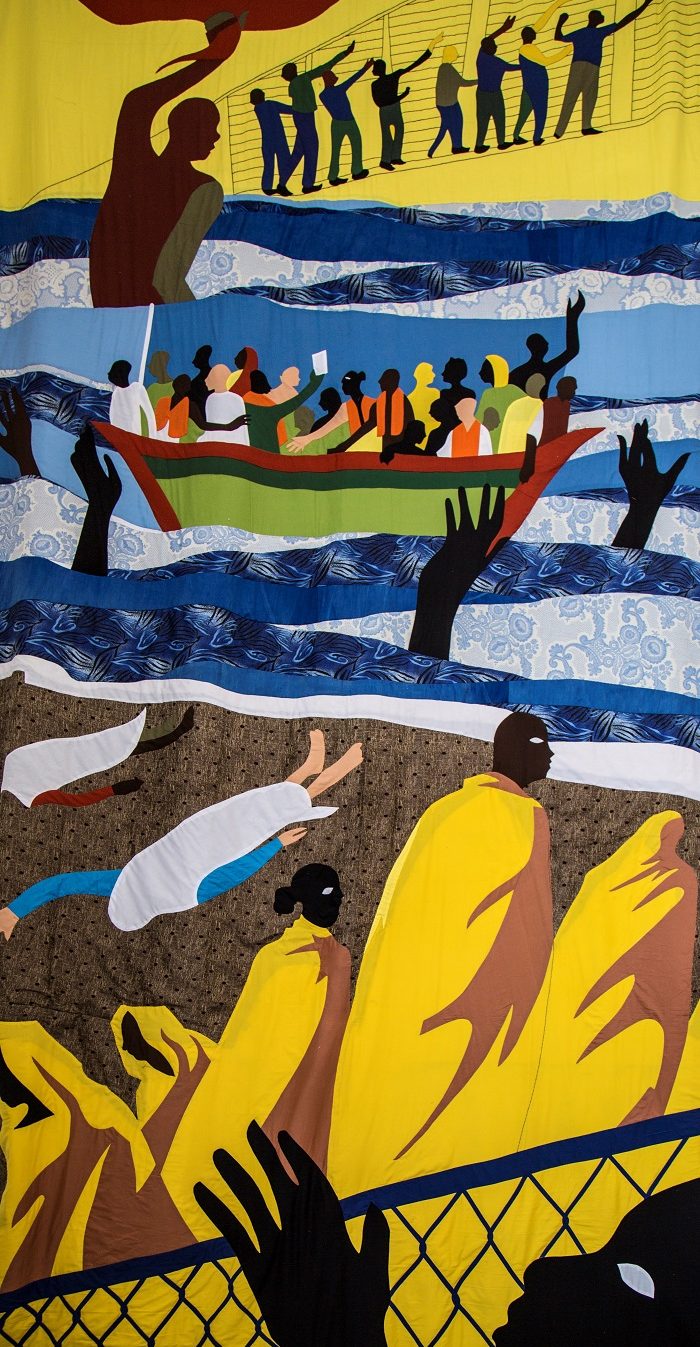 “I’ve always seen art as a way to better understand my culture and roots,” says art collector Jorge M. Pérez, who was born in Argentina to Cuban-exiled parents.

While the bulk of the South Florida real-estate developer’s vast art collection has been focused on Latin American and Caribbean works, Pérez discovered what he calls “an unexpected kinship” to African art and art of the African Diaspora.

“While I didn’t always experience a direct connection to African and African Diaspora art, that all changed once I traveled to the continent myself,” he says.

Pérez says he found many similarities to the works produced by Latin American and Caribbean artists: “Among these parallels were questions of political and social oppression, colonialism and identity, all of which were deeply embedded in many of my favorite pieces from Cuba and numerous other Latin regions.”

You can see 100 of his pieces in an exhibition titled, “Witness: Afro Perspectives from the Jorge M. Pérez Collection,” at his 1-year-old private museum, El Espacio 23 in the Allapattah neighborhood of Miami-Dade County.

The art is exceptional – and the curator behind “Witness” is, too. Zimbabwean-born Tandazani Dhlakama is assistant curator at Zeitz Museum of Contemporary Art Africa (MOCAA) in Cape Town, South Africa. Open since 2017, it is the first major contemporary art museum in Africa.

“I met Tandazani during one of my many visits to Zeitz MOCAA, the largest museum of contemporary African art in the world. Shortly after meeting, we found we had a common passion for using art to celebrate and, more importantly, understand identities and cultures from around the world,” Pérez says. 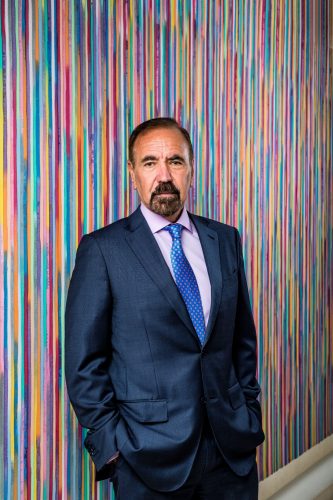 Art collector Jorge M. Pérez says he has traveled to Africa multiple times and has developed ties to many of the local galleries and artists. (Photo courtesy of Nick Garcia Photography )

Dhlakama worked alongside Pérez’s full-time curators, Patricia M. Hanna and Anelys Alvarez, albeit from a distance because of COVID-19.

“The idea was that I would come a couple of times initially to see the space and for the installation and the opening, but unfortunately because of travel restrictions in both countries, I haven’t been able to,” she says.

Still, while it would have been wonderful to spend time in Miami, she says it didn’t affect her curating of the show.

For Dhlakama, it was a dream come true to select from “such a wide-ranging, interesting and significant collection,” she says. “That was the fun part, for sure.”

When she began to immerse herself in the collection, some narratives began to emerge, Dhlakama says.

“There were stories that were coming from an African perspective that I wanted to highlight. They all speak to this idea of witnessing in different ways,” she explains.

And so was born the name of the show, “Witness.”

The year 2020 certainly was a time to put this perspective into context, she says.

“We have all been witness to many things – some of us have been implicated knowingly or unknowingly and, regardless of what vantage point you are coming from, there’s this idea. You watch another human being murdered in nine minutes,” she says, using as an example the death of George Floyd at the hands of Minnesota police, and how the video made anyone who watched it a witness. 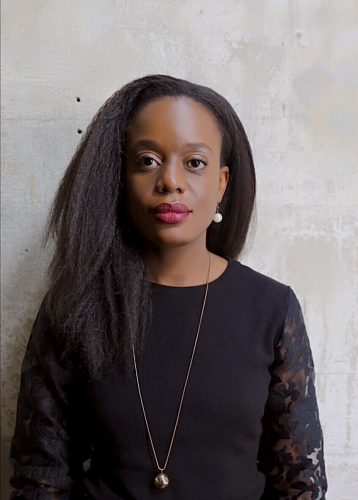 “But what does something like that mean?” she asks.

“The work that I wanted to put in the show, to a certain extent, helps us make sense or highlights the issues,” adds Dhlakama, emphasizing that the art reflects on more than what’s happening in the present.

“There’s an important continuum around race, displacement, migration. These are not new issues. These are issues that humanity has been grappling with.”

She mentions some of the artists included in “Witness,” such as Frida Orupabo, a Norwegian with Nigerian heritage: “This is why it is subtitled, ‘Afro Perspective,’ as I don’t believe that you can talk about the African continent without talking about the African Diaspora.”

The African Diaspora refers to the many communities of people of African descent dispersed throughout the world as a result of historic movements, much of it from forced migrations due to slavery. 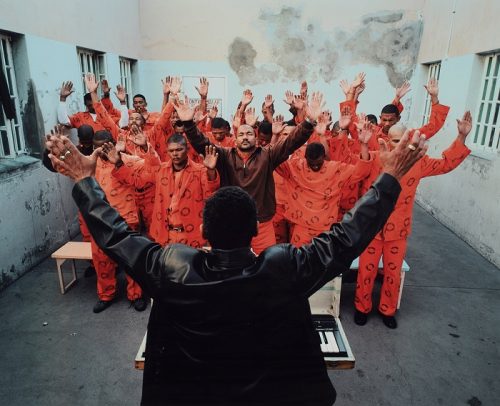 “We tried to make sure that there were representations from the geopolitical space – the African Diaspora, i.e. anyone or anything that is rooted on the African continent even loosely related. A curator I looked up to once said, ‘Africa is a utopia, so why do we limit it to a physical land mass?’ ”

“Of course, you can’t talk about Africa without thinking about race, and even that is complex. There are white Africans,” she says, with representation in the show by the works of multidisciplinary artist Mikhael Subotzky, a white South African born in Cape Town.

There’s also a piece by Cuban artist Carlos Martiel, “Mediterráneo,” which addresses human migrations and, in this work, the issues of Europe’s commitment and accountability for African migration.

One of the most prominent Cuban artists, KCHO (Alexis Leiva Machado), is part of Pérez’s collection, and his works will be on display at the exhibit. KCHO grew up on the small island of Isla de Pinos, Cuba, and lives and works in Havana. His subject matter is the portrayal of migration, specifically those seeking refuge by risking their lives in perilous voyages at sea.

“You can’t talk about Latin America without talking about Africa,” says Dhlakama, which circles back to Pérez’s idea about connection.

Pérez’s first trip to Africa in 2013 introduced him to the art and piqued his curiosity.

“Eventually that curiosity grew into more of an obsession,” he confides. 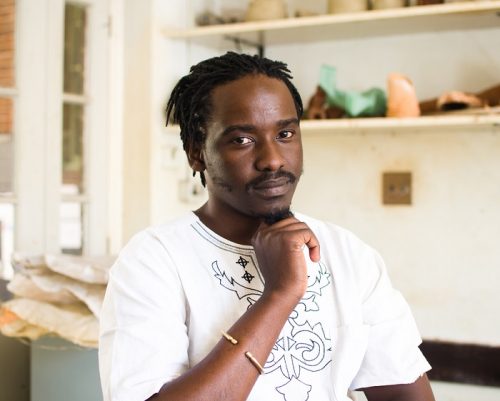 Pérez says he has traveled to Africa fives time since and has developed ties to many of the local galleries and artists, “to better understand trends, and identify young up-and-comers and more.”

He also recently pledged $2.5 million worth of the African art he’s been collecting to the Pérez Art Museum Miami (PAMM), which has more than 40 of the works on display through July 1, 2021.

“Miami, in particular, stands to benefit greatly from this recent emphasis on art from African and African Diaspora artists,” says Pérez. “Many of these works serve as a window into a seemingly foreign world, one not often shown in film and television, while also highlighting the undeniable similarities between African, Latin American and Caribbean cultures, as well as the outlooks of their people.”

WHAT: “Witness: Afro Perspectives from the Jorge M. Pérez Collection”

SPECIAL INSTRUCTIONS: During the COVID-19 pandemic, viewings will be available by appointment only, from 10 a.m.-5 p.m. Thursdays, Fridays and Saturdays. In accordance with U.S. Centers for Disease Control and Miami-Dade County guidelines, face coverings are required for all visitors and staff, and hand-sanitizing stations are placed throughout all galleries. Social distancing of at least 6 feet is strictly enforced.

INFORMATION: To reserve a time, and for more information about guided tours, visit Elespacio23.com or email info@elespacio23.com.