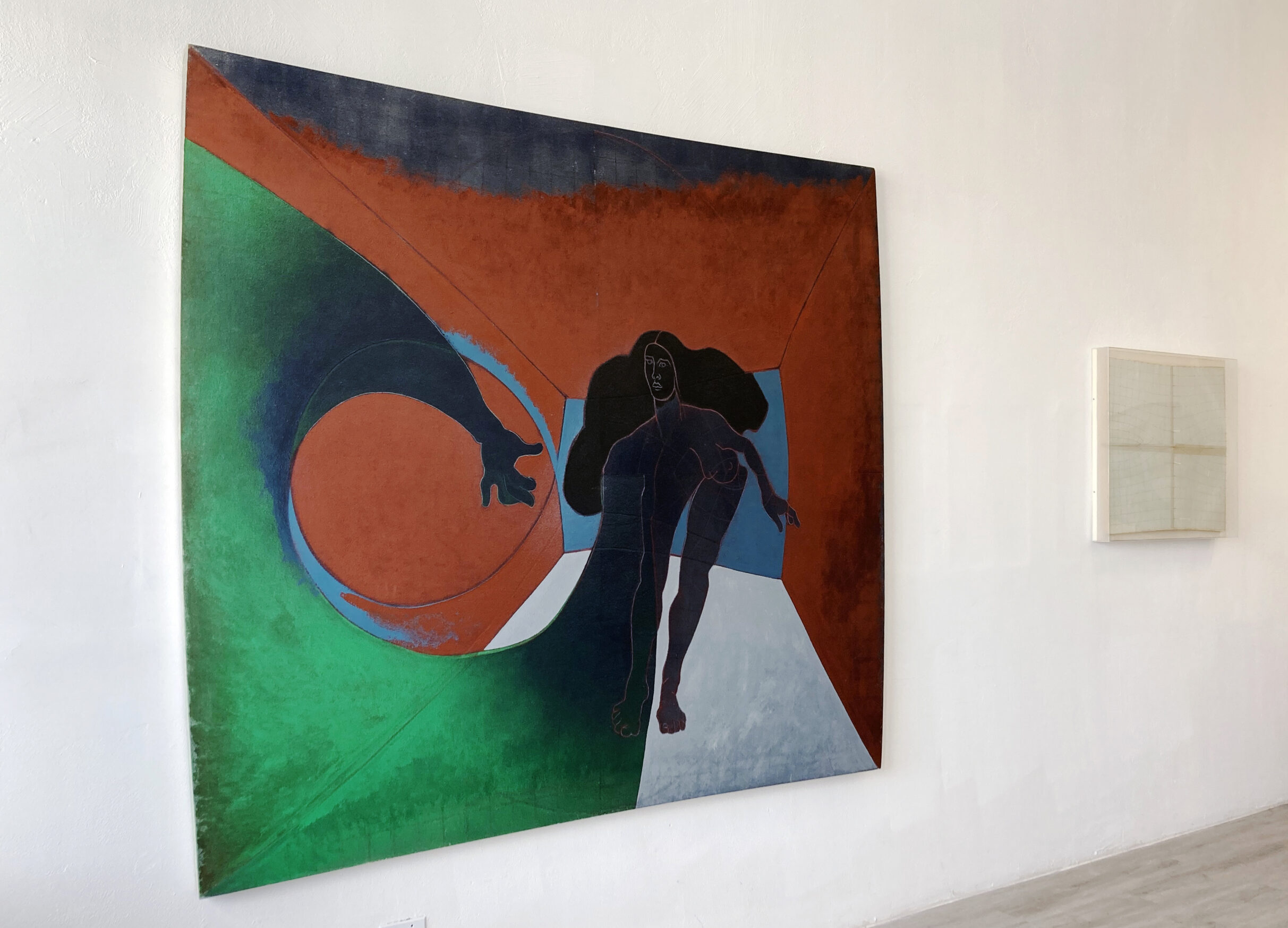 Enrique Castro-Cid’s “Blue Nude (1979)”, acrylic on canvas with “Untitled,” an ink, pencil, on graph paper from the same year, are part of the exhibition “Protocol Pressure” at [NAME]. (Photo courtesy of [NAME])

An exhibition space in South Miami isn’t one that’s regularly on the radar. However, there are big things going on at [NAME], yet the smallish brick-and-mortar storefront belies the depth of artistic intelligence happening on the inside.

Possibly more familiar to locals than [NAME] is its neighbor in the Southwest 40th Street shopping plaza – the consignment second-hand store Miami Twice, a play on “Miami Vice,” a destination that’s an icon for its vintage clothes and handbags, which has been in the same spot since the mid-1980s.

Although [NAME] has existed since 2008, it moved into its public space just after COVID in February of 2022. [NAME] Publications got its start when Gean Merino was awarded a grant from the Knight Foundation to begin a press creating books dedicated to and by artists. 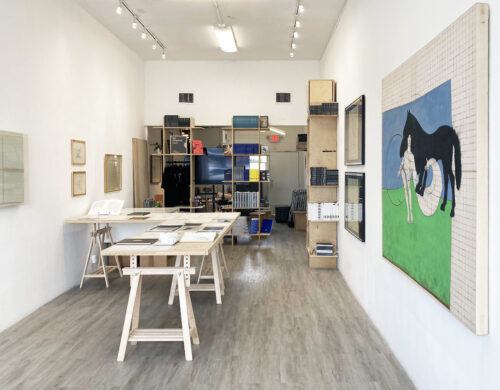 A view inside [NAME], which is currently showing the work and gathered ephemera of Chilean-born artist Enrique Castro-Cid. The painting at right is “Biscayne Afternoon” (1986), acrylic on canvas. (Photo courtesy of [NAME])

The artists’ press, [NAME] Publications, remains one of the staples of the hybrid non-profit, whose mission, with its exhibitions, its archives, and its books is to support and present underrepresented or marginalized or often untold histories of artists, particularly from the Americas.

There’s no better reason to discover all of [NAME] than its current exhibition, “Protocol Pressure,” now in its final week. It closes on Saturday, Jan. 21 with a reception from 5 to 7 p.m. with a talk by collaborator, collector and close friend of El-Cid’s, Frank E. Acosta.

Paging through Enrique Castro-Cid’s notebooks of computations amid ephemera carefully curated throughout the space transports you into the Chilean-born artist’s mind. Into a different world. A time not too long ago but that registers nostalgic. Call it BCAD or Before CAD.

The various notes and scribbles, handwritten letters, and photos amassed at [NAME] make you question almost everything. 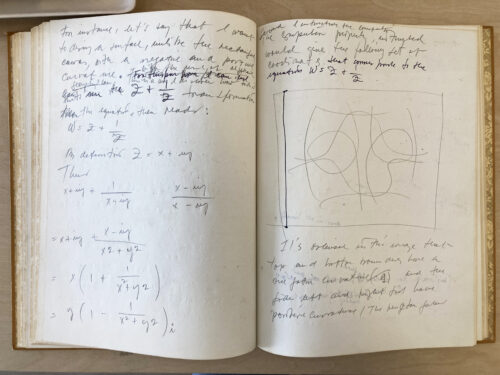 One of Enrique Castro-Cid’s notebooks, which are part of “Protocol Pressure” at [NAME]. (Photo courtesy of NAME)

He sucks you into his obsession with the rules of making paintings. Why must it be? Here, in his own hand, is Castro-Cid’s mind trying to maneuver a way out, an escape from the boxed-in Cartesian or Euclidean geometry, the way in which depth of space needed to be depicted. “Space as an act of reflection is absolute, yet, as a phenomenon presents many forms and gradations,” according to the artist.

Paintings. Rectangular canvases with no consideration of space within the canvas relative to space? He examines different possibilities. It shows up as infinite numbers, calculations, and mathematics, as he explores what would happen to the figures and to the space of painting if art and technology co-exist.

In one acrylic on canvas, Castro-Cid doesn’t mask his process. In the 1986 “Biscayne Afternoon,” the grid is partially showing, the painting put off center with the grid above and to the right. In the 1979 “Blue Nude,” the grid is obscured, faintly noticeable. A closer look at the canvas and the edges are bowing. Castro-Cid had put pressure on the canvas itself. Was he leaning into the calculations he had been fixated on? “There’s a lonely relationship between a viewer and an orthodox painting,” Castro-Cid is quoted as saying. 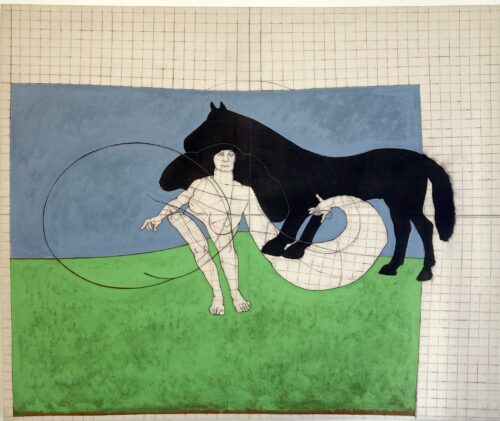 “Protocol Pressure” at [NAME] is the first of two exhibitions planned to explore the life and work of Castro-Cid. The current show is centered on what the artist created in Miami from the late 1970s through the 1980s when he was focused on experimenting with computer-aided software (CAD).

Born in Santiago, Chile, in 1937, he moved to New York in 1961. It didn’t take him long to become part of the Manhattan social set. He married Harper’s Bazaar magazine cover model, Sylvia Palacios Whitman, who also performed in avant-garde art venues. Following his split from Sylvia, he wed art patron Christophe de Menil in 1971. His relationship with the daughter of Dominique and John de Menil, whose Menil Collection in Houston is one of the most important privately assembled collections of modern and contemporary art, lasted three years.

In 1980, he arrived in Miami where he found the leisurely pace a place for him to dig deep into his art vis-a-vis technology mindset. Then, on a trip to Santiago in 1992, he died suddenly of a heart attack at the age of 54.

The way in which, [NAME] curator and co-director, came upon Castro-Cid’s work is one of those meant-to-be stories. She tells me she visited a friend’s home in 2014-15 and hung on the wall was a drawing – ink, pencil on graph paper. It caught her eye.  ” ‘I’m sorry, what is this?” she asked, already fascinated. The friend told her whose work it was and then divulged: “And, I also have this box of notes.”

Yes, the work that fascinated her so much is part of “Protocol Pressure,” so you can see the 1979 “Untitled” for yourself.

Zuluaga says that the current display of Castro-Cid’s personal musings, carefully curated on a table at [NAME] is only a small selection of the full trove of documents in their archives.

It became yet another addition to other ephemera that compelled [NAME] co-directors Merino and Zuluaga to mine more and more material. A Knight Arts Challenge Grant in 2021 propelled what’s now called Migrant Archives. Along with the Castro-Cid material, they had been gathering and researching ephemeral practices of 1980s Cuba.

And in the summer of 2022, they co-curated an exhibition as part of documenta 15 in Kassel, Germany, called “To the Bitter End: Civic Practices in Cuba at the Beginning of the 21st Century,” which included bulletins, zines, articles, and other documents from Cuba in the 2000s. 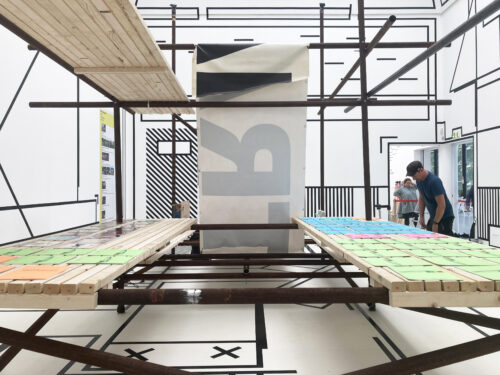 Gean Merino and Natalia Zuluaga co-curated “To the Bitter End: Civic Practices in Cuba at the Beginning of the 21st Century” an exhibition that was part of documenta 15 in Kassel, Germany, in the summer of 2022. (Photo courtesy of [NAME])

It’s only the tip of the iceberg. Along with what they’ve already amassed, they will be searching, salvaging, and compiling cultural materials from artists, especially those who, as Zuluaga says, have been exiled and are living in the South Florida community. She calls some of the pieces “orphaned objects” citing that, in many cases, they are materials that can’t go home.  Most likely the infrastructure from where they were born isn’t politically stable and the archives could be lost forever if not rescued.

Migrant Archives will be a public open archive – an online platform that anyone can access and that will preserve all kinds of history. Currently, the [NAME] co-directors are immersed in the work of graphic designer Havana-born Félix Beltrán and Cuban public graphics. In the 1970s, Beltrán was the main designer of propaganda for the Communist Party of Cuba during the Cuban Revolution.

Zuluaga says simply: “The core of the mission remains the same, it’s how we get it out.”

[NAME], with its shelves of artists’ books from the publication side, and its current “Protocol Pressure” creates a space to be explored. No doubt, it will leave an impression.

WHAT: “Protocol Pressure”, the works, research, and archival materials of Enrique Castro-Cid

WHEN: 11 a.m. to 3 p.m.Wednesday through Saturday. A closing reception is set for 5 to 7 p.m. on Saturday, Jan. 21 with Frank E. Acosta, Castro-Cid’s collaborator and close friend, who will discuss the artist’s life and work in a talkback.