Behold the ‘3 Graces: Naughty Then and Now’ at Design District gallery

Amid the season’s clarion calls, don’t miss the quieter siren call of “3 Graces: Naughty Then and Now,” which is on view at the Swampspace art gallery in the Design District through Dec. 27. While a “Viewer Discretion” advisory is posted outside, the erotically themed work by Bunny Yeager, Eve Eurydice and Kitty Brophy elevates, rather than degrades, the female form and spirit.

Since 2008, artist, art fabricator and gallerist Oliver Sanchez has hosted scores of often-iconoclastic performances and exhibitions in his eclectic, make-yourself-at-home space. Among them: “Kill the Book,” “Beautiful Losers,” “Low Tide Shopping,” and “The Ephemera of ABMB.” As both beneficiary and survivor of Art Basel Miami Beach’s infusion of international attention, cash, glitter and air kisses, Sanchez has gallantly maintained sanity and regional allegiance in programming for the season.

“I’m focused on local artists, particularly when the whole world has its eye on Miami,” he said in a recent interview. He bemoans the fact that during this period, many local venues import artists already riding giant reputations. While including longtime friend Brophy, who is Arizona-based, the current exhibition holds to his “support local” philosophy.

Yeager’s work became the anchor when Sanchez learned of the availability of a body of her work from her agent, Ed Christin.

Yeager (real name Linnea Eleanor) was born near Pittsburgh in 1929. She came to Miami at age 17 and, while already a beauty pageant winner and model, she learned photography at Lindsey Hopkins Technical College.

“She was a little bit of her own muse,” Sanchez said. “And she knew that if she could photograph her own self in this pinup style, she could do it for others, and many stepped up.”

In 1954, she met model Bettie Page and sold her photo (wearing only Santa’s hat) for the “Playboy Magazine” January 1955 centerfold.

“When Bunny met Betty, it was like a volcano erupting, because Bunny was able to awaken a magical, mystical animal in this awkward girl from middle Florida,” Sanchez said. 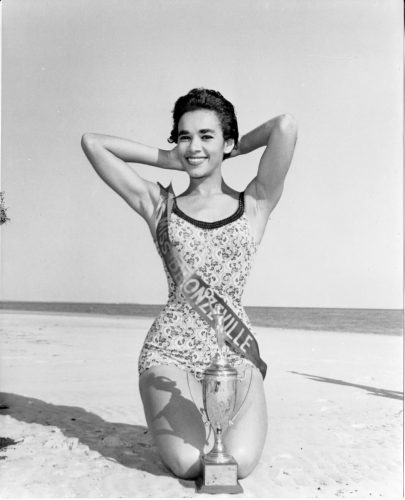 One series depicts Page – sometimes alongside Yeager and her camera – posing with cheetahs at a wildlife park. Woman’s “animal nature” may have been suggested, but by today’s standards, Yeager’s photos – despite many “come hither” poses – project a refreshing innocence, due at least in part to the respectful camaraderie that Yeager, a working mother, established. One coy “girls at work” shot depicts eight young women in shorts and heels polishing a fire truck.

As a woman photographing women – many of them amateurs – Yeager was challenged to establish the rights to her images. She learned the hard way that boyfriends or husbands might disapprove – after the fact. Among the snapshots, letters, vintage magazines, check stubs and other fascinating ephemera on view is a model release form that specifically addresses male partners. Alongside the compositional artistry, technical innovation and directorial prowess that the photos demonstrate, Yeager’s audacious tenacity as a business woman and promoter also shine through.

Yeager’s photography of black models from the United States and Caribbean represents another daring venture that’s illuminated in a concurrent exhibition at The Copper Door B&B in Overtown.

While Yeager’s work certainly merits continued attention, Eurydice, whom Sanchez had exhibited previously, came to mind as a complementary voice.

“She is the most in-your-face of all, because she is unapologetic,” Sanchez said.

Before she learned to read, she joined her mother, grandmother and aunts in Lesbos, Greece, weaving and stitching. Simultaneously, she heard ancient myths and learned women’s submissive role in society. At age 15, she ran away to Los Angeles.

“I had to go very far and actually use a different language altogether to unlearn all that training and think for myself,” she said. 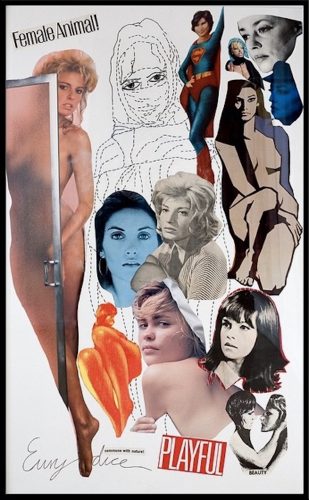 A prolific writer and speaker, she advocates for frank sex talk and autonomy to achieve liberation from patriarchal orthodoxy. Like Brophy, she incorporates text in her visuals, which range from modest (in scale only) stitched portraits on paper to mural-sized, multi-figured pieces that incorporate her assertive social messages “to cast protection on the world and ward off evil.”

When it was suggested to Sanchez that he include Brophy’s work, he quickly agreed. Her explicit treatment of eroticism in a distilled graphic style would create a strong foil. The three became friends while Sanchez and his brother, Adolfo, were graphic designers, artists and arts entrepreneurs within the East Village arts scene of the 1980s.

As a teenager in Phoenix, Ariz., Brophy showed a love for drawing and fashion that fueled her idealized vision of New York City: Patti Smith, Lou Reed, Andy Warhol, disco. The mirage faded, but while studying illustration at Parsons, she was recruited into the modeling industry, which absorbed her for a decade.

By the mid-1980s, the destructive “Club 57” lifestyle had taken its toll, and she needed to clean up. Returning to Arizona and the art discipline she had abandoned, Brophy found both fulfillment and recognition. 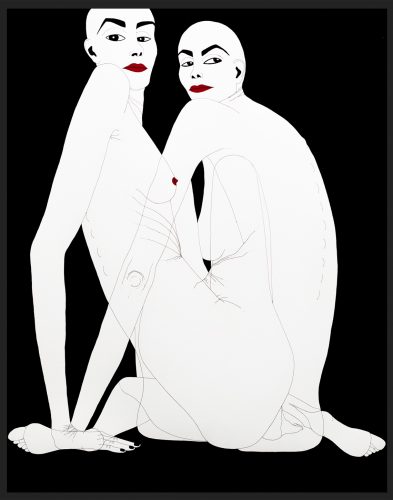 For the past 10 years, she has devoted herself to line drawings and graphic paintings that explore sexual themes in her own terms – using (mostly) carefully composed selfies as references. Alongside these bold, but exquisitely delineated compositions that frequently isolate and emphasize the sex organs, she invents poetic texts that combine commentary on everyday situations (such as waiting in the doctor’s office) with explicit provocations. The transition from a Catholic girl’s body shame, to abusive scrutiny as a model, to autonomous self-expression has been liberating.

“Screw that, I’m showing everything and I own it,” she said.

What: Glamour Shots by Bunny Yeager