At Spinello Projects, two Miami artists are up against the clock 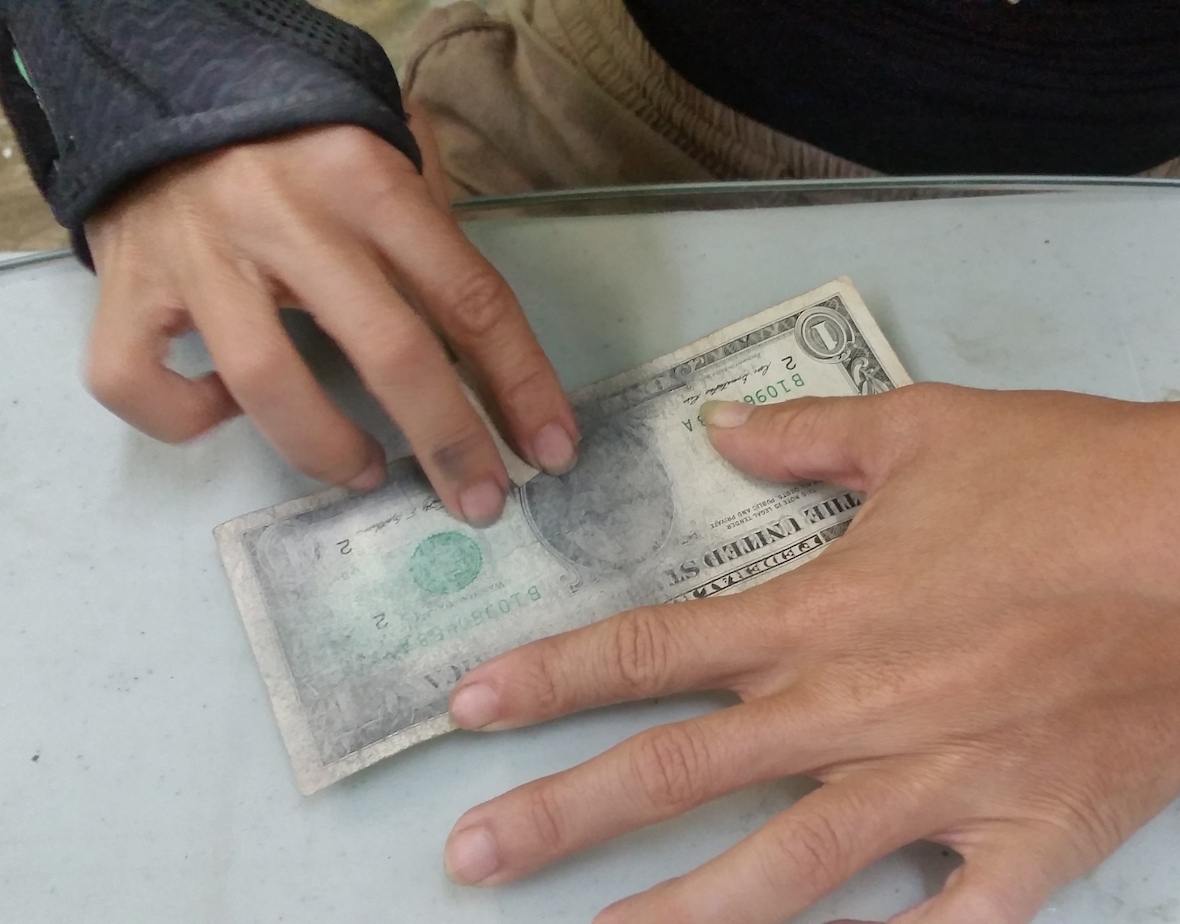 “Within Time,” a modestly scaled but momentous exhibition featuring five acrylic paintings by Eddie Arroyo and two disparate but complementary works by Agustina Woodgate, is on view through July 31 at Spinello Projects, which has returned to its one-time Allapattah venue.

The artists tackle issues of gentrification, the capricious value of labor, cultural erasure and the industrialization of time in ways both direct and subtle. The show coincides with the artists’ participation in the Whitney Biennial in New York.

Whitney Museum curators Jane Panetta and Rujeko Hockley saw works by Woodgate and Arroyo during a 2017 visit to Spinello’s expansive show “Mere Façade,” which explored the socioeconomic conditions of Little Haiti through the eyes of 20 artists. Woodgate at that time, gallerist Anthony Spinello says, “had a multilayered map that caught their attention, and Eddie had a whole wall of paintings.”

The curators were tight-lipped about revealing too much about the evolution of the 2019 biennial, Spinello recalls, but the two artists eventually were selected. Considering that Miami-based artists have not been included in the museum’s prestigious snapshot of contemporary U.S. artmaking since 2008, the appearance of Woodgate and Arroyo in the biennial is significant for the artists, the gallery and Miami’s art community.

“Miami is having another bit of a renaissance,” says Spinello, who has been a dealer for almost 15 years. He sees it “both [in] the nature of works produced in Miami and the support artists are having in institutions. I think we are now being considered as part of bigger conversations.”

For Arroyo, who grew up in Little Havana, immigration and gentrification are prominent concerns. In 2011, he began his “Developers Survey” series, photographing buildings in the transitional neighborhoods of Wynwood, Little Haiti and Allapattah, focusing on botanicas, bodegas and other small, community-oriented businesses. Now 42, the artist was deeply moved by the work of Serge Toussaint, a Haitian-born sign painter and muralist whose vivid imagery of goats, hats, drummers, vegetables and generals conveys cultural pride, resilience and history. Arroyo laments the erasure of those murals, which often follows property sales to unsympathetic investors. Arroyo’s informal acrylic paintings spotlight the downsides of gentrification, and he has taken part in civic protests against government policies that facilitate displacement in the Little Haiti neighborhood he shares.

“If [capitalism] is the best way of doing things, shouldn’t it benefit everyone?” Arroyo asks. “And that’s the question I continue to pose to businessmen and developers. To people who are promoting themselves as bringing prosperity, I ask, ‘Prosperity for whom?’ ” 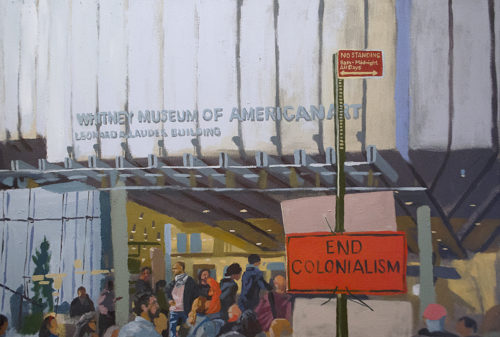 Eddie Arroyo’s “End Colonialism” was inspired by protests that occurred during the Miami artist’s participation in the 2019 Whitney Biennial in New York. Image courtesy Arroyo and Spinello Projects.

Sharing the title “5825 NE 2nd Ave. Miami, FL 33137 (Cafe Creole),” Arroyo’s four paintings selected for the Whitney Biennial depict this former restaurant at progressive stages of “whitewashing” between 2016 and 2019. Although unimposing in scale, they command attention and contribute to the extensive but nuanced societal critique the Whitney curators have orchestrated.

Even before it opened, this year’s biennial was marked by controversy. The museum’s board vice chair, Warren Kanders, was rebuked by staffers and artists for his ownership of an armaments company, though calls for his resignation have been unsuccessful. Several of Arroyo’s “Within Time” paintings at Spinello draw directly from his stay in New York during the May opening of the biennial, where he joined one protest directed against Kanders and another dramatizing the “invasion” of Chinatown by arts institutions.

His documentation of these tumultuous events includes figures carrying banners and shouting. The New Museum and Whitney facades give context to signs reading, “End colonialism” and “Chinatown is not for sale!” Arroyo’s style is satisfyingly textured and detailed, without fussiness. He readily cites the influence of Edward Hopper.

Spinello is keenly aware of the awkward dynamic of art institutions hosting work that indicts the very power structures whose patronage helps keep the doors open. He wrestles with the practicalities of operating an unpredictable business, while also creating ambitious, noncommercial ventures that champion marginalized voices and buck the male domination and sales orientation of most art fairs. Along with Zoe Lukov, Spinello co-produced Fair (2017) and Free (2018) at Brickell City Center. Many of the artists dramatically indicted pernicious social mechanisms.

“We all have hair,” she says regarding a five-year project offering free haircuts on the streets of Buenos Aires, her birthplace, “and that same thread is carried along all my work: this idea of that common thing that has potential of trespassing the objecthood and symbolizes entire systems.” 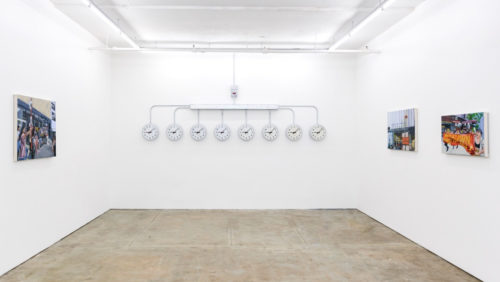 She has broached the complex and problematic notion of political boundaries, for instance, by sanding down globes and atlases, obscuring those imposed divisions, then creating artworks from the collected ink.

Representing Florida’s minimum wage when the piece was conceived, it consists of 16 rectangles of black and green ink dust, collected from both sides of eight one-dollar bills, painstakingly (and illegally) sanded and then adhered around the “ghosts” of those bills. She pointedly questions the disparate values of those dollars as artwork, as obliterated currency and as the wage for the labor of erasure and assembly.

“Work Out” is part of Woodgate’s series of wall-clock installations, titled “National Time.” In this iteration, eight institutional clocks, common to schools, factories and prisons, are wired together. The network’s so-called “master” clock is synchronized through the power grid and dictates conformity among the subsidiary, or “slave,” clocks. Embodying the domination represented by institutional time — and other nefarious forces — that sovereignty is cleverly undermined by Woodgate’s attachment of small sanding blocks underneath the minute hands. They slowly turn, irrevocably erasing the numerals and thus liberating themselves from the arbitrary rule of time.

“Within Time” runs through July 31 at Spinello Projects in the Gesamtkunstwerk Building, 2930 NW Seventh Ave., in Miami. Go to SpinelloProjects.com. Listen to audio clips from Spinello, Woodgate and Arroyo.