At Spinello Projects, Antonia Wright pushes back on abortion ban 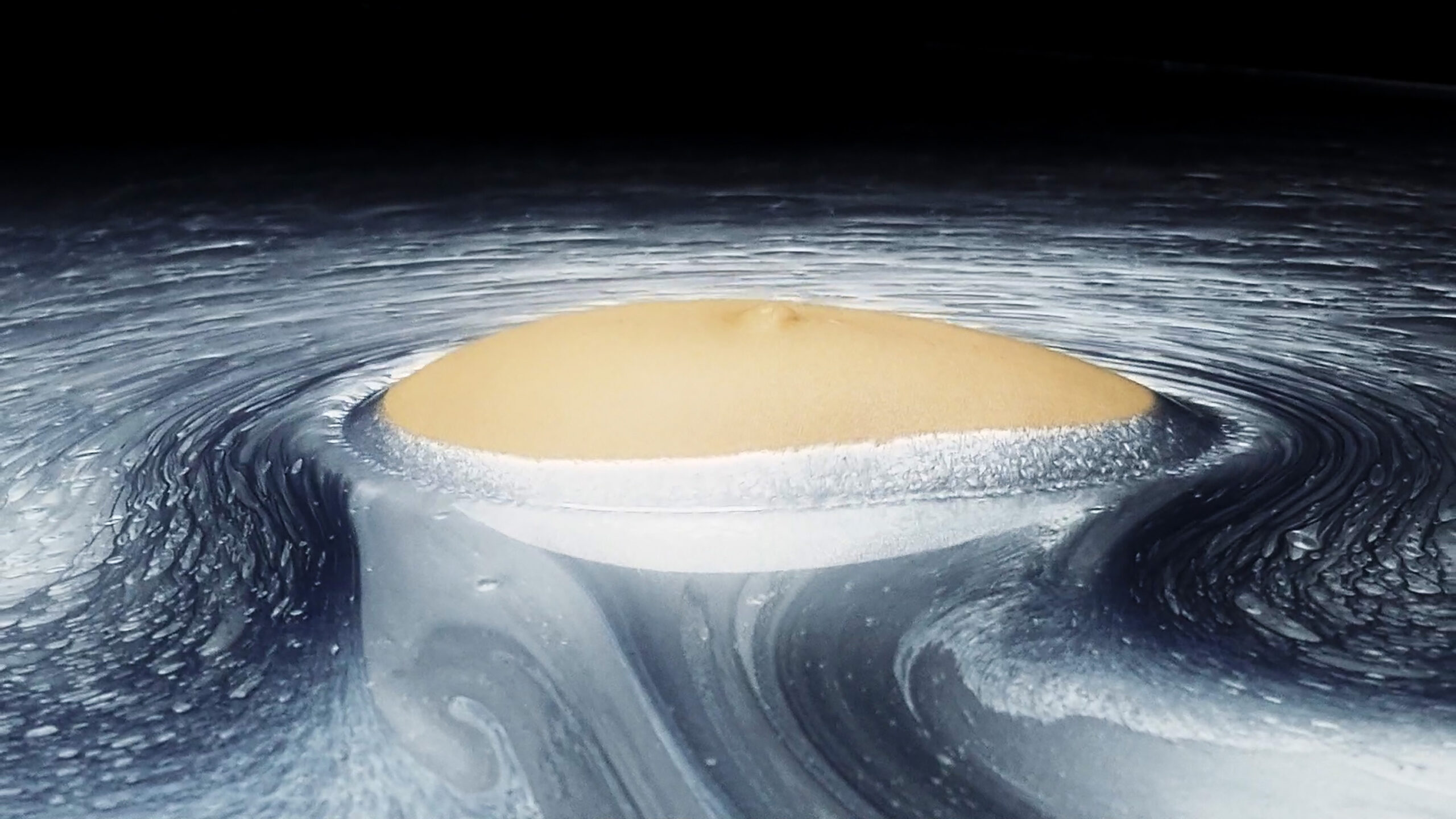 Antonia Wright, video still for “And So With Ends Comes Beginnings,” 2019-2020,
single channel video. Filmed when Wright was 9 months pregnant, it is part of “I Came to See the Damage That Was Done and the Treasures That Prevail” at Spinello Projects, Miami. (Photo courtesy of the artist and Spinello Projects)

Rego is hailed for her “Abortion Series,” a large-scale series of pastels from the late 1990s. They were conceived to protest the defeat of a 1998 referendum to decriminalize abortion in her native Portugal.  Her art was later credited with altering public opinion to allow legal abortions in Portugal in 2007.

In this influential series, a single-clothed woman in anguished pain is depicted alone, sometimes curled in a fetal position in bed or with knees drawn up next to a bowl. She’s a grim survivor of an illegal abortion. “I didn’t want to show blood, gore or anything to sicken, because people don’t want to look at it then,” Rego said at the time. “And what you want to do is make people look.” 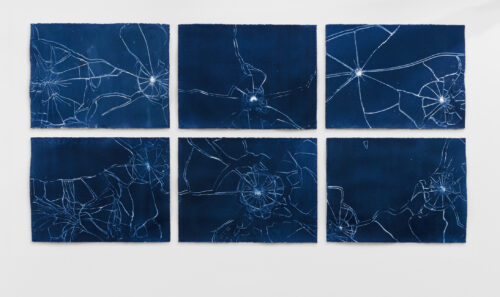 Miami artist Antonia Wright is among a growing number of women artists who share Rego’s outrage over anti-abortion forces and who create art in protest. “With the reversing of Roe, I feel anxiety for younger women and the fear they must have around unexpected pregnancy,” Wright says.

She’s also a board member of Planned Parenthood and mother of two young children. Her arresting art is now on view at Spinello Projects.  It addresses women’s challenged right to control their reproductive health. The work is both fierce and delicate, resonant with terrible beauty.

At Spinello, Wright’s “I Came to See the Damage That Was Done and the Treasures That Prevail” brings together photograms, glass sculptural objects, video, and a tough-to-forget sound art installation, “Women in Labor.”

While Rego said she wanted to make people look, Wright wants to make people listen.  There’s absolutely nothing to see in Wright’s “Women in Labor.” What you do see unfolds only in your imagination. Wright gives us no visual cues, only absolute darkness, surely recalling life inside the womb.

To experience “Women in Labor,” you walk into the darkness of a single gallery. A cacophony of screams soon surrounds you. You’ll hear a shrill bleat. It sounds like an animal brought to slaughter. Then ragged, wordless shouts multiply. They rise into a horrific crescendo. They suggest the ear-splitting chaos of a mass shooting.

Abruptly, moans soften into frail sweetness. There’s low, rhythmic breathing, an almost ecstatic, even orgiastic sigh. It dissolves into seconds of silence, of peace. And then a strident wail tears into more tumult, a butchered world of pain where peace is a shredded memory. 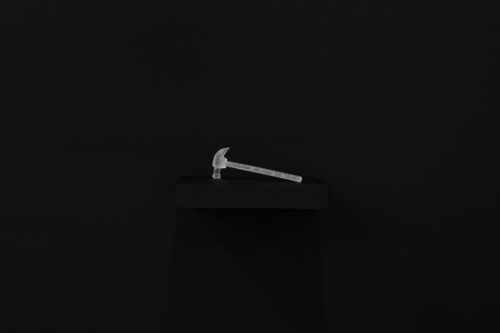 Wright calls “Women in Labor” a “data sonification artwork” for our post-Roe era. It’s produced by an algorithm she developed with data reflecting miles women must travel in 11 states with abortion bans  in order to receive an abortion. That mileage data has been randomly combined with soft and more intense sounds of 11 women in labor.

Because this installation is operated by a self-generative program, the sequence of sounds constantly changes. “You’ll never hear the same sound combination twice,” she says.

Those more intense and tormented sounds signify how women’s reproductive rights are being violated by anti-abortion legislation, requiring the labor of traveling long distances to receive this procedure. Economic pain is also part of the labor, Wright explains, as such travel often means women must do extra work to pay for a hotel and, if they are mothers, childcare.

“All of that labor is time and money,” she says.

How did Wright get these indelible sounds of women giving birth? Partnering with a lawyer to create a contract, Wright explains that she asked her own midwife to sign a contract stating that Wright owned the sounds the midwife recorded from her patients. While the actual women whose sounds we hear signed a contract agreeing to participate anonymously in this artwork, Wright reveals that the audio includes sounds recorded from her own labor.

The artist says she offered to pay the midwife for her work recording these sounds, but the midwife declined. Wright adds that she hired a woman-owned business to distribute gift baskets with post-pregnancy presents to the women who participated.

“I know it seems contradictory to think about women having babies in the context of abortion rights,” says Wright. “But for me, it’s part of the same conversation about reproductive justice and letting women make decisions over their own health care.”

Prolific and innovative, Wright excels at mining visual and verbal metaphors. It’s no surprise that her website lists an MFA in Creative Writing and Poetry from New York’s New School, as well as exhibits in New York, Los Angeles, Vienna, Buenos Aires, as well as Miami. 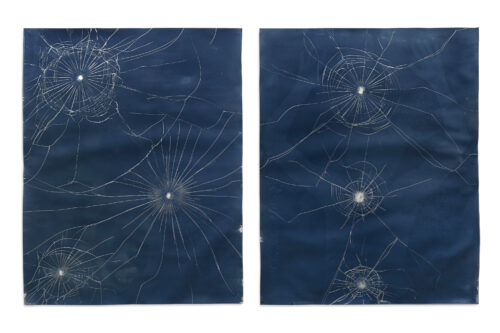 Performance has long been part of her practice. At Spinello, the video “And So With Ends Comes Beginnings” was shot when Wright was nine months pregnant. Filling the screen is her belly protruding from a bath of non-toxic silver paint. As she breathes, her voluptuously rounded belly rises and falls against a swirling waterscape soon overlaid with scenes of cranes and housing from Miami’s nonstop construction. Eventually, her belly recalls a deserted island engulfed by water. Unnerving and mesmerizing, this video depicts the resilient treasure of a new life entering a world awash in challenges wrought by rising seas.

While Miami’s famously blue waters are absent from that video, they are indirectly present in her intensely blue cyanotype photograms, created when paper is treated with photosensitive chemicals and exposed to sunlight. Wright’s photograms bear white clusters of circular lines, echoing the sheet of glass she placed over each paper, then slammed with a hammer before exposing it to sunlight.

WHAT: Antonia Wright: “I Came to See the Damage That Was Done and the Treasures That Prevail”

WHEN: noon to 5 p.m. Wednesday through Saturday, by appointment only, through Oct. 29